There are very good reasons to predict that the Deep and Comprehensive Free Trade Area between the EU and Ukraine could boost the Ukrainian economy. However, to achieve this, a precondition is that the instability created by military and economic aggression progressively decreases, and that ongoing reforms deliver results on corruption, rule of law, etc., in order to improve the business climate.

In exactly 6 months, on the 1st of January 2016, a Deep and Comprehensive Free Trade Area (the so-called DCFTA) should be established by the Association Agreement between the EU and Ukraine. Much has been said about this agreement. Yet, a great deal of misunderstanding persists in the public debate in Ukraine and elsewhere.

This is not surprising given the complexity of the instrument: with 486 articles (of which 312 are related to the DCFTA) and 2,137 pages in total[1], this is one of the most ambitious and comprehensive bilateral agreements the EU has ever concluded.

For this reason, it is worth providing a concise overview of what the DCFTA is really about.

One of the obvious elements of the agreement is that it establishes a Free Trade Area (FTA) between the EU and Ukraine. This implies that tariff duties paid when selling goods between Ukraine and the EU will, in most cases (99% of present trade value), progressively decrease to zero.

Three specific features are worth underlining: first, the agreement is asymmetric. This means that even though the EU will drop its tariffs almost immediately and fully after the DCFTA is established, a phase-in period of up to 10 years will exist for Ukraine, in order to reflect the difference in industrial competitiveness between the two areas.

Second, in the context of a very challenging economic situation for Ukraine, the EU has been unilaterally implementing the tariff part of the agreement since end of April 2014. This means that for most goods, Ukrainian exporters can already access the EU market duty free  (an overview of the first results can be read here).

Third, one substantial exception to full tariff liberalization on the EU side is agriculture where certain exports are also duty free, but only up to certain quotas. This does not mean that exports are prohibited once the quotas are exhausted, but that duties have to be paid to export above the quotas.

One could note that there is nothing revolutionary here: FTAs are one of the most common tools of trade policy simply because they deliver benefits that are strongly backed by economic theory and practice. The EU already has free-trade relations with many countries around the world and is currently negotiating new agreements (including with the United States and Japan). Similarly, Ukraine has FTAs with countries of the Commonwealth of Independent States and is negotiating agreements with Canada and Israel.

This is a key characteristic of FTAs: they are not mutually exclusive. Nothing prohibits a country from entering into free-trade relations with as many trade partners as it wishes to. This includes with customs unions such as the EU. Therefore, from a purely legal and economic perspective, nothing prohibits Ukraine from maintaining its FTA with Russia while at the same time implementing fully the DCFTA. It is simply nonsense to claim that because of the DCFTA Ukraine would have to give up the existing preferred trade relations with Russia.

In addition to this FTA, which targets “tariff barriers”, the DCFTA includes a normative part which envisages that Ukraine will progressively adopt a very substantial part of the “EU acquis” aiming at getting rid of most “non-tariff barriers”. It means that the rules of the EU internal market in a wide number of fields (technical standards, sanitary and phyto-sanitary rules, public procurements, competition, intellectual property, etc.), would progressively be applied in Ukraine, and be based on reformed Ukrainian legislation.

As mentioned above, even though the tariff part is a classic tool for liberalizing trade, this legal approximation dimension makes this agreement very ambitious and specific to Ukraine, and so it becomes “Deep and Comprehensive”.

No one disputes that this is a challenge for Ukraine. The rules of the EU internal market are rather sophisticated as the protection of the consumer is the cornerstone of their design. But this does not mean that these rules are not business-oriented, quite the contrary, they aim at striking the right balance between consumer protection and industry competitiveness.

The same goes for tariffs, the DCFTA foresees that this convergence to EU rules will happen over several years. Benefits of approximation for Ukraine are two-fold. On the external markets, it will give much easier access for Ukrainian companies to the EU, since rules will be the same as on the national market. On the internal market, it will increase the protection of Ukrainian consumers while at the same time favour a deregulation process to the benefit of companies, as European rules are much more business friendly and less burdensome than the existing ones inherited from the Soviet period.

One could argue that by adopting EU rules Ukraine may sell more easily on the EU market, but could then struggle to export to other markets – losing on one side what it may gain on the other. This however is incorrect. First, with 500 million customers and a GDP of around 14 trillion euros in 2014 (twelve times more than Russia for instance, based on the current exchange rate), the EU market is the largest in the world. Second, European norms and standards are widely recognised worldwide: being able to export to the EU means in many cases being able to export to the rest of the world. Third, EU-based industries, which by definition comply with EU rules, have no problem to export to the Russian market, as demonstrated by the fact that the EU is by far Russia’s largest trade partner. To put it bluntly, the difference between EU and Russian norms have never been an issue when exporting German cars to Russia.

Is it possible to quantify the economic benefits for Ukraine in concrete terms? A joint study carried out in 2011 by the German Advisory Group and the Institute for Economic Research and Policy Consulting (Quantitative Assessment of Ukraine’s Regional Integration Options: DCFTA with European Union vs. Customs Union with Russia, Belarus and Kazakhstan) envisages that the welfare of Ukrainian consumers would increase by 11.8%[2] over the medium run. This is substantial of course, but still far from what is necessary to transform the Ukrainian economy.

However, there are very good reasons to predict that the DCFTA could boost the Ukrainian economy far beyond these figures. Adopting EU norms and standards, combined with duty free trade, will attract investors and technology transfers from Western Europe and from other leading economies.

This will help to transform the Ukrainian economy from an exporter of mostly raw materials and agricultural products, to a player fully integrated into EU and global value chains: a substantial leap in terms of added value of its production. However, to achieve this, a precondition is that the instability created by military and economic aggression progressively decreases, and that ongoing reforms deliver results on corruption, rule of law, etc., in order to improve the business climate.

Quantifying the possible results is very difficult if not impossible, but a comparison with western neighbours of Ukraine gives us a hint. As figure 1 shows, since the collapse of the Eastern bloc, the four neighbours of Ukraine that later joined the EU enjoyed an average annual growth of more than 3% (with a real growth of 4,2% for Poland, 4,1% for Slovakia, 2,2% for Romania, 1,7% for Hungary, over the 1992-2013 period according to World Bank data), whereas Ukraine’s GDP declined by 0,7% every year on average. 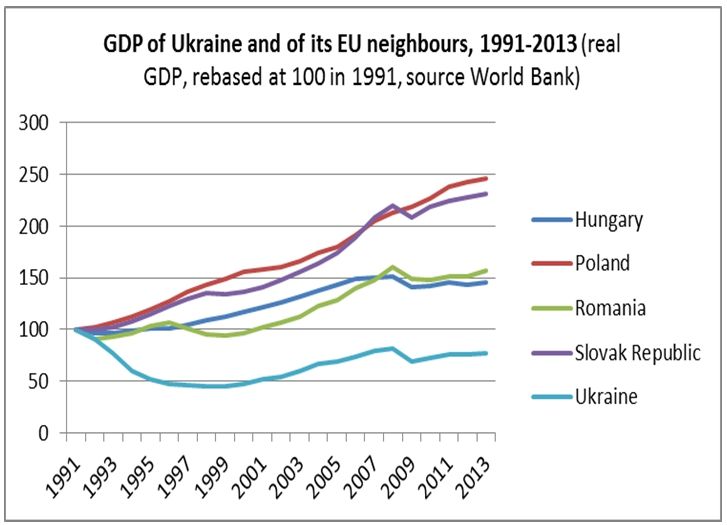 Of course, any comparison has its limits. Poland, Slovakia, Hungary and Romania are members of the EU (since 2004, except for Romania, since 2007), they are geographically closer to richer Western Europe and they were not members of the USSR. But it should be kept in mind that between 1992 and 1995 when they signed association agreements with the EU, membership was a very remote prospect, clearly not factored in by most investors. And still they enjoyed very substantial economic growth all through the 90s. Therefore, the triggering element of this sustained growth was not EU membership but a combination of trade liberalization, ambitious reforms and the adoption of EU standards. All that combined to create a substantial incentive for western companies to outsource part of their production to these countries.

This may be more difficult for Ukraine, not least because Ukraine has kept postponing necessary reforms for two decades, but also because reforms must now be adopted during a military and economic crisis. However, on the positive side Ukraine can also draw lessons from the successes – and failures – of its neighbours. In any case, there is no fundamental reason why Ukraine could not replicate these accomplishments, and the DCFTA is a step in that direction.

The DCFTA itself should enter into force provisionally on the 1st of January 2016. The fact that this implementation will be “provisional” does not mean that the EU is reluctant to implement the agreement fully. It simply means that according to EU rules, an international agreement between the EU and a third country must not only secure the consent of the EU Parliament but must also be ratified by the relevant authorities of all EU Member states. Today a majority of Member states have already completed this step, but not all (as illustrated by this infographics). On the 1st of January, the process will probably still be ongoing, and this is the reason why such a provisional implementation is foreseen, in order to avoid further delays.

[1] mostly tariff lines, while the Agreement itself is less than 200 pages long
[2] the increase in GDP would be slightly less, the difference stemming from the fact that consumers would enjoy lower prices thanks to reduced tariff duties, hence an increase in purchasing power higher than the increase in GDP