Consequences of the war for the global economy and some European countries: Czechia

Consequences of the war for the global economy and some European countries: Czechia

The war has not only crashed Ukraine’s economy but also created problems for other economies, particularly the European Union. However, Eastern European countries feel the burden of war more than Western countries. In this article, we use Czechia’s example to examine which macroeconomic indicators were affected by the full-scale war and to what extent.

It has been eight long months since russia launched a full-scale war on Ukraine, destroying Ukrainian cities and villages and killing tens of thousands of our fellow citizens, both military and civilian. Hundreds of enterprises, infrastructure facilities, and thousands of small and medium-sized businesses were ruined. Millions of Ukrainians were forced to seek refuge either in our country’s safer areas or abroad.

However, the war hit not only Ukraine – its shock waves spread like circles on the water throughout the world. With the global economy still recovering from the devastating impact of Covid-19, russian aggression is once again dragging it into a maelstrom of economic crisis. Global economic growth, which accelerated in post-Covid year 2021, began to wane rapidly. According to IMF estimates, world economic growth will slow to 3.2%, from 6% in 2021. It is the lowest figure in the last twenty years, except for the 2008 crisis and the “Covid” year 2020.

Meanwhile, high inflation has made a comeback to the world economy and is the main challenge for the central banks. A hybrid energy war waged by russia against Europe has pushed energy prices higher. Destructions in Ukraine’s agricultural sector and food industry and the blockade of Ukraine’s exports are the primary reasons for the rise in food prices worldwide. According to the IMF, global inflation will reach 8.8% in 2022 compared to 4.7% in 2021. A number of poor countries, directly or indirectly dependent on grain imports and food prices, have ended up on the verge of poverty. In other words, russia’s war on Ukraine has slowed down world economic development and nearly doubled the growth of world prices.

The IMF published a new world economic outlook report with projections of economic developments in particular countries and the world.

The European countries are losing the most, especially some Eastern European countries shouldering the tremendous burden of the war’s destructive impact, providing Ukraine with the most substantial military aid, and accommodating millions of refugees. According to IMF estimates, the 2022 GDP growth rate in the European Union will cool to 3.1% compared to 5.3% in 2021, and European emerging market economies will slow down to 0.9% compared to the considerable growth rates of 6.5% in 2021. Two most successful Eastern European reformers – Czechia and Poland – have suffered significant negative impact. Relative to the size of their economies and populations, they have accommodated the largest number of Ukrainians and provided substantial aid to Ukraine. Czechia has had single-digit inflation since introducing inflation targeting in 1996. Over the past 20 years, Poland has consistently had one of the best indicators of economic growth on the European continent. The latest estimates show that economic growth in both countries has significantly slowed and will be sluggish  in 2023, with inflation in both countries in double-digits. In September, inflation reached 18% in Czechia and 17.2% in Poland despite the long-term inflation targets of both central banks standing at 2% (see Figure 1).

Next, we consider Czechia’s current economic situation in more detail. While it mirrors the general problems facing the European countries, it has suffered most from the destructive impact of the war in Ukraine (except Ukraine, of course).

Growth and employment. GDP growth has declined this year compared to post-Covid 2021, when the Czech economy recovered from the crisis. Domestic economic activity has slowed rapidly since the beginning of 2022 following the escalation of russian aggression against Ukraine. In the winter of 2022, the Czech GDP growth forecast for this year was at 6%, revised down to 2% in August. That gives an idea of the war’s overall impact on the Czech economy. A decrease in economic growth is due to a significant reduction in household consumption and reduced business investment activity. Household consumption has declined due to a fall in real income and a rapid increase in the cost of living. Investments have declined due to the high uncertainty of the business climate, rapid growth in energy and raw material prices, and many disrupted technology chains. Despite the slowdown in the economy, employment is gradually increasing as firms try not to lay off staff in order to avoid high hiring costs in the future when economic growth resumes (as can be seen from Table 1, unemployment in the Czech Republic is low causing wages to rise and encouraging companies’ efforts to retain staff).

Inflation. As in the rest of the EU states, inflation in Czechia has significantly accelerated since the start of the year. In September, annual inflation reached 18%, a level not seen in Czechia since 1993. At the same time, prices for all goods in the consumer basket increased: for utility services due to an increase in energy costs, and for food prices because of the food crisis arranged by russia. Core inflation (i.e. the price index excluding food and energy) has also been growing rapidly since the start of the year. It reflects the growth in aggregate demand due to increasing wages and pensions, fiscal transfers to compensate households for higher energy bills, and aid provided to refugees from Ukraine and homeowners accommodating Ukrainians. An increase in inflation expectations has also contributed to the rise in inflation. The Czech central bank expects a decline in inflation in 2023 due to tighter monetary policy, slower future growth in import prices, and moderate wage growth.

Current account of balance of payments. The current account (CA) deteriorated significantly with the start of the full-scale war in Ukraine (-2% of GDP in the first quarter of 2022) since Czechia had a positive current account balance in all the previous years, except for 2021, when there was a small deficit of -0.8% of GDP. This expansion of the CA deficit is explained by disrupted technology chains, particularly in the automotive industry, and a significant deterioration of terms of trade due to rising prices for raw materials and energy. A sharp decline in external demand from major trading partners, such as Germany and other EU countries, also contributed to the deterioration of the current account balance. The Czech central bank estimates that the current account deficit might reach -5.6% of GDP this year and decrease to -2.6% next year.

Fiscal policy. Czech’s fiscal balance ran into deficit in 2020 after the country introduced measures to support the economy during the pandemic. This year and next, the deficit of the consolidated budget will remain at about 5% of GDP due to growing government spending, particularly on military and humanitarian aid to Ukraine and Ukrainian refugees and sanctions imposed against russia.

Monetary policy. At its last meeting on September 29, 2022, the Board of the Czech National Bank (CNB) decided to keep the policy rate (repo rate) at 7%. Given the considerable and persistent inflationary pressure, it was a “dovish” decision. Core inflation is high and unlikely to decrease in the near future. Prices are growing for a wide range of goods (the widest among European economies, see Figure 1), which indicates demand-pull inflation and an increase in inflationary expectations, encouraging an appropriate response from the central bank (i.e., an increase in the interest rate). 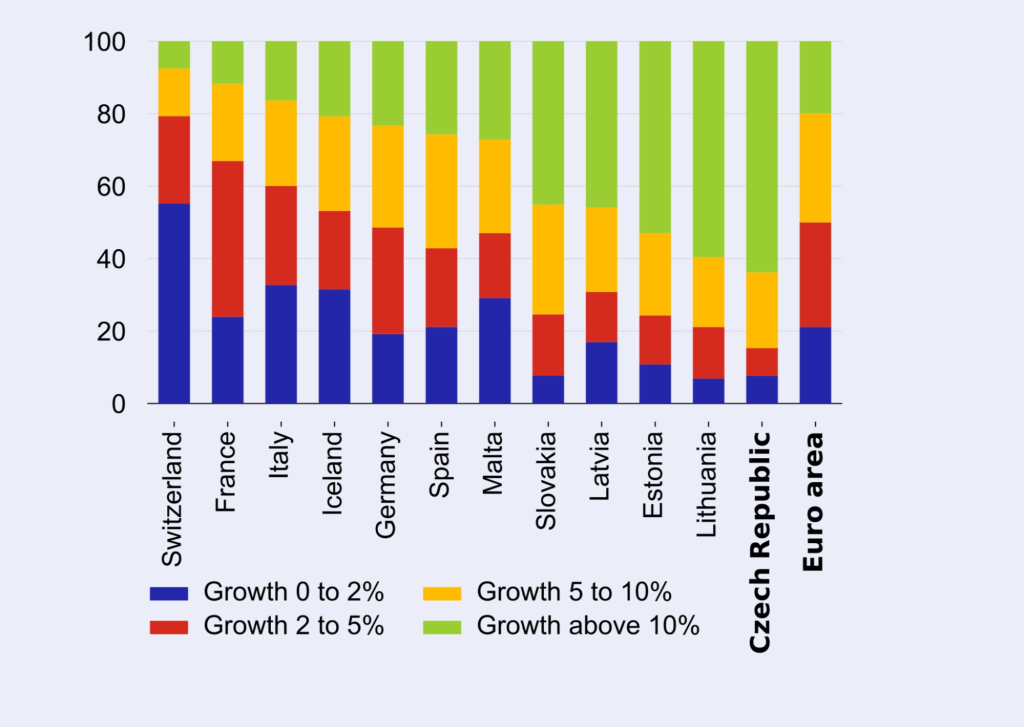 Source: Czech National Bank. Note: the figure shows the percentage of goods in the consumer basket that increased in price within a specified range (e.g., prices for over 60% of goods and services increased in Czechia by over 10%)

The war in Ukraine continues to hurt the global economy, with the European continent suffering the most (especially Eastern European countries). With rapidly slowing  economic growth, a recession is possible in some Eastern European states. Although major central banks have started to raise policy rates, inflation continues to rise, leading to a fall in real incomes and shrinking aggregate demand. Continued shelling of Ukraine’s critical infrastructure and a cold winter might cause a new wave of migration, which would place an additional burden mainly on the countries of Eastern and Central Europe. Eastern European economies have already taken in the highest number of refugees relative to their populations, so these countries’ budgets bear the greatest financial burden.

The main risks are the continued and escalated war effort in Ukraine and its negative impacts on the economy and finance of the European continent. The associated risks include an increasing shortage of energy resources and their rising prices, a further slowdown in European economic activity, a decrease in demand for European export goods, and a deepening of the energy and humanitarian crisis related to russian aggression. Only the EU joint decisive and coordinated action to help Ukraine and rapid adaptation of the European economy to the current situation can help resist russian aggression.