COVID-19, quarantine and the job market expectations in urban Ukraine

The employment status of billions of people has been affected by the COVID epidemic around the Globe. For 2020 IMF projects a substantial rise in unemployment in Ukraine to 12.6% from 8.5% in 2019. We investigate which characteristics of urban Ukrainians give more chances to keep the job during the quarantine, to work from home part or full time, and also to have savings for more than one month.

Quarantine and the job market in Ukraine

A nationwide quarantine was introduced in Ukraine on March 12th with just a few confirmed cases and not a single death. This early implementation of coronavirus containment policies can potentially explain the relatively low number of cases and deaths. In July 2020, Ukraine ranked 87th in terms of total cases per 1 million people and 78th in terms of deaths per 1 million people out of 213 countries in the world. On the negative side, quarantine puts at risk job opportunities and financial security of many Ukrainian households.

In our recent study, we identified those urban Ukrainians who are more likely to keep the job even during the quarantine, to switch to work from home as a precautionary measure, and also to have a financial pillow for more than one month. We used a Gradus survey of 1,176 respondents from Ukrainian cities with a population of more than 50 thousand people. The survey was conducted on April 8th, just four weeks after the initial quarantine was implemented, so our results show rather short-term effects of the quarantine on the job market.

* Disclaimer: These high numbers should not be treated as population averages because Gradus uses weights and we report unweighted sample averages.

We study which factors make a person more likely not to work (“Not working”), to work remotely (“Working from home”), and to have savings for one month or less (“Savings for <1 month”). We believe that these variables give a good description of the current employment status of urban Ukrainians, their adjustment to the post-COVID remote working environment, and also their preparedness for economic hardship, which is likely to follow the epidemic.

Table 1. Correlation between the key variables of interest 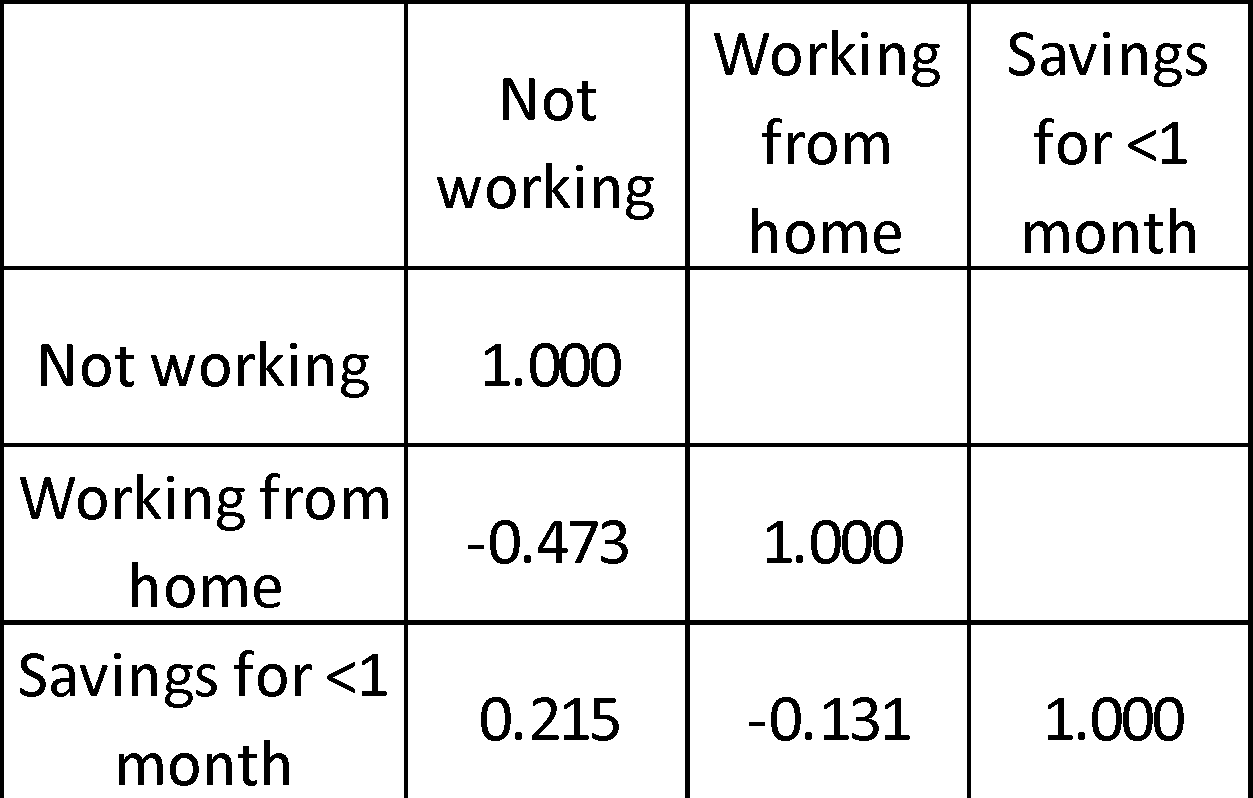 Notes: Authors’ calculations based on the Gradus survey.

In our working paper, we have identified some interesting correlates for each variable. For example, respondents aged 25-34 years old are 9.6% points more likely not to work during the quarantine while married respondents have 9.9% points higher chance of being employed. There is a robust negative effect of household size on the probability of working – respondents from multi-person households are 11.9 to 17.7% points more likely not to work compared to those who live alone. Regarding remote work – females have 12.7% points higher chance of working from home while respondents form multi-person households are 10.6% to 14.1% points less likely to work remotely – perhaps because of limited space at home. Respondents from Kyiv are 20.4% points more likely to work from home. Post-secondary and higher education increase the chances of working from home by 13.8% and 11.8% points correspondingly. Higher education is also associated with better financial security – such respondents are 10.4% less likely to have savings just for one month. Remarkably, respondents who are knowledgeable about the actual number of COVID cases in the world are 7.1% points less likely to have limited savings for just one month, probably because they followed the news and took some precautionary steps.

Perhaps, the most intriguing part of our research comes from the effects of working in specific industries and occupations reported in Table 2. Respondents in certain economic sectors were more likely to remain employed even during the quarantine: by 18.3% points (significant at 5%) in Public administration, by 23.8% points (significant at 1%) in Research, and by 21.6% points in Programming and IT (significant at 1%). Similarly, for certain occupations, employment prospects remain bright even during the epidemic crisis. Highly qualified specialists such as physicians, lawyers and similar are less likely to lose a job by 15.4% while middle and department managers’ chances to stay employed are higher by 20.2% and 15.8% points (all coefficients significant at 5%). The probability of staying employed during the quarantine for military and police personnel is higher by 35.9% points compared to the base category of other occupations.

Regarding financial security, we found that respondents in Research, Programming and IT, Advertising and Mass Media, as well as Finance, Banking, and Legal sectors, are 17.1-27.7% points less likely to have limited savings of just one month. Another striking result is that working before the quarantine was not associated with increased financial security in a statistical sense. A phenomenon of “the working poor” is still present in Ukraine, where the monthly minimum wage is below 200 USD.

Table 2. Effects of the sector of economic activity and occupation

Notes: Authors’ calculations based on the Gradus survey. Selected coefficients from the linear probability model (LPM) with robust standard errors clustered at the city level. Coefficients statistically significant at 10% are shown in bold.

Our findings indicate potential concerns for the well-being of urban Ukrainians during the COVID-19 epidemic. The crisis is likely to exacerbate socio-economic inequalities: better-educated respondents and those living in Kyiv are more likely to secure work from home. In terms of policy suggestions, the government of Ukraine should pay more attention to the labor market in regions and provide social support to lower-skilled social groups.

Some findings are unique to the misaligned economy of Ukraine. For example, better-educated respondents are not always protected from job loss or financial insecurity, which is also not improved if a respondent was employed before the quarantine. These findings may indicate low quality of education and a phenomenon of a “working poor” still characterizing Ukraine.

Gradus survey respondents are Ukrainians aged 18-60 who live in cities with a population of 50,000 or more. That is, the survey is representative only for the urban population. We used the survey conducted on April 8th, which asked about the Orthodox Easter celebration, compliance with the stay-at-home policies, and employment changes due to the COVID-19. The survey lasted less than 24 hours, and 1,176 respondents out of 2,177 listed in the Gradus panel have responded (implying the response rate of 54%).