Depth of the Dip Unknown. Is There a Chance to Execute the Budget in a Crisis Year | VoxUkraine

Depth of the Dip Unknown. Is There a Chance to Execute the Budget in a Crisis Year

Economists failed to predict 148 of 153 past recessions. That is what Prakash Loungani, a budget expert at IMF, concludes in his study. Even so, recessions are not an uncommon phenomenon, the economies of countries are in recession 10-12% of the time.

There are little grounds to expect better forecasting in the future. “We are getting worse at making forecasts because the world is getting more complicated,” says Mark Pearson, deputy director for employment, labor and social affairs at the OECD.

The year 2020 has become an indisputable proof of this.

For the world at large, and Ukraine in particular, 2020 has become a year when all economic plans and forecasts have lost relevance in a matter of days. The crisis caused by coronavirus has also affected budget planning. Back in January, the Ministry of Finance was calculating the parameters of the estimated 2021 budget for three years ahead, and then just put a halt to those plans a few months later.

“The budget process never ends. We are starting to prepare a three-year declaration for 2021-2023,” said then-Finance Minister Oksana Markarova in January 2020. Over the next three months, Ukraine had a new government and two new finance ministers, with the economic crisis unfolding due to the COVID-19 pandemic.

Already on April 13, the Parliament approved the Ministry of Finance’s budget amendments on suspending until January 1, 2021, Article 33 of the Budget Code setting out the rules for preparing a budget declaration for three years. By that, the MPs suspended medium-term planning in 2020.

It had taken Ukraine years to introduce it. Ministers Natalka Yaresko, Oleksandr Danyliuk, and Oksana Markarova called medium-term planning their priority. The essence of medium-term planning is to project the main budget indicators for the next three years. This approach to preparing the budget is used in developed countries. It makes budget policy predictable and high quality.

The reason for the suspension is that, in a crisis, it is impossible or very hard to predict anything.

However, even without the crisis, budget planning and execution has been completely lame. Last year, VoxUkraine collected data on state budget execution from 2007 to 2018 and found out why the estimated budgets’ execution failed year after year.

In this year’s study, we analyze the execution of the 2019 budget and, partly, of the 2020 budget. In the latter case, we do not compare forecasts with facts but the initial and updated forecasts under the influence of the crisis.

The least accurate budgets are those affected by the previous global financial crisis (Figure 1). The most accurate is the 2018 budget prepared by the Ministry of Finance under Oleksandr Danyliuk. Accuracy was achieved by refining the macro-level forecast data between the first and second readings of the budget review process. Weighted average deviation of budget revenue was 5%.

Weighted average deviation enables us to see what was happening “inside” the budget. We used this indicator to assess the accuracy of Ukrainian budgets. Because the lower the planned revenue is, the greater any small deviations of the actual indicators relative to the planned ones will be (less probability to predict correctly; a greater impact of various events on the result). Weighting was based on the given revenue category’s share in the sum total of the five main revenue sources: VAT, excise taxes, rent, income tax and customs duties.

Figure 1. History of total and weighted average deviations of actual GDP compared to estimated GDP in 2007-2019

The 2019 budget was estimated based on the forecast approved in July 2018. Revenue was projected at UAH 1,026.1 billion. According to the year’s results, the plan failed to be implemented by 3%.

Analysis of the changes taking place “inside” the budget during the year provides a more complete picture of the state of budget affairs at the year end. The largest shortfalls in revenue were the 13% in VAT and 20% in rent collections. Income tax revenue turned out to be 12% higher (Fig. 2).

Even the amendments to the estimated budget made four times during the year did not help balance out the situation. 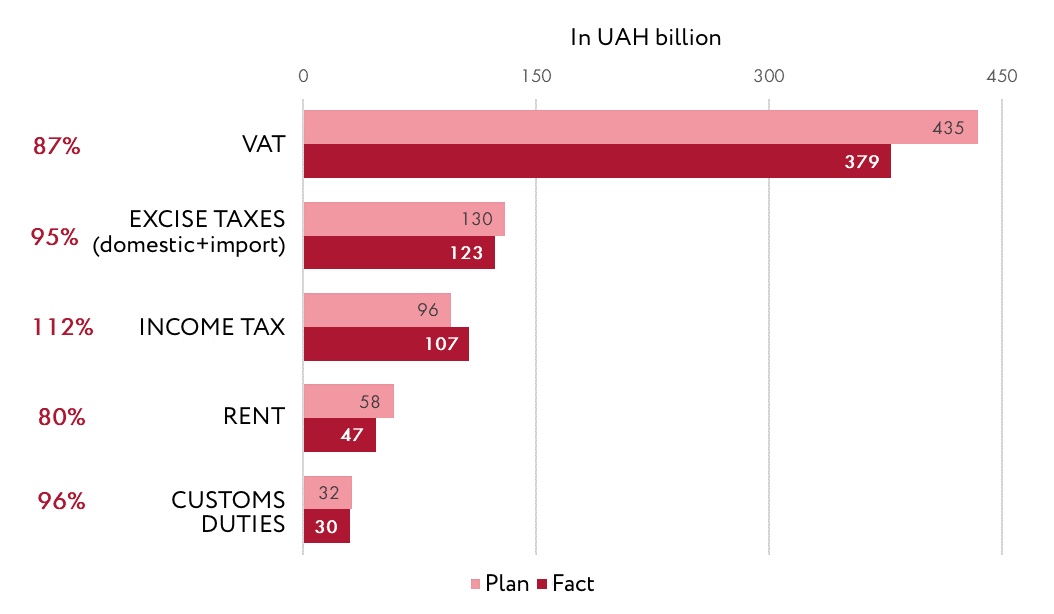 Several macroeconomic factors prevented the plan from being implemented. With the GDP growth forecast being quite accurate, the other macro indicators were not.

A depreciation of the exchange rate and low inflation are normally good news for those receiving their salary in hryvnia, i.e. for the majority of the population. However, with regard to the state budget, it is a shortfall in all revenues related to imports, taxation of sale of goods and provision of services.

During the year, the exchange rate was much stronger than planned: the budget had been calculated at an average rate of 28.2 UAH, but it ended up being 25.8 UAH per dollar. Inflation, projected at 7.4% was 4.1%, the lowest since 2013.

There was also a 7.1% slowdown in import growth instead of the projected 9.1%. This left customs revenues “suffering”, with the VAT on imported goods collections declining by a stunning 15%.

Lower-than-expected gas prices were the major cause of lower revenue from rent.

2020 has been a year of lockdown and recession in the world economy. No one can predict exactly how deep it will dive and how quickly it will recover from the effects of the pandemic. At this stage, we can only observe how quickly international organizations and governments are updating their forecasts.

On January 9 this year, the IMF estimated that, the world’s GDP would grow on average by 3.3 percent in 2020. Ukrainian economy was to grow in unison with the world’s, at 3% of GDP. Three months later, the Fund issued a new report saying that “the global economy is projected to contract sharply by –3 percent in 2020, much worse than during the 2008–09 financial crisis.”

At first, the Ministry of Economic Development and Trade announced that the economy would shrink by 3.9% due to the crisis. Then Prime Minister Denys Shmyhal said, that things were much worse, with the macroeconomic forecast suggesting a 4.8% of GDP dip in the economy in 2020.

Economic forecasting variation remains extremely high. According to the official position of the Ministry of Finance, real GDP estimates for Ukraine this year also range very widely – from a 1% growth to 7.5% decline.

In preparing a new version of the state budget, the government proceeded from a 4.8% drop in GDP.

MPs reduced the revenue forecast by 11%. This decrease reflected differently on tax revenue, with the expected revenue from rent decreasing by 41%, and excise revenue by 9%.

Due to the negative economic trends, the revenue plan for VAT on goods produced in Ukraine decreased by 22%. It is planned to collect 13% less VAT on imports, due to the forecast on import dynamics changing from a 9.6% growth (in dollars) to a 10% decline.

Figure 3. Initial and updated planned budget revenues by category in 2020 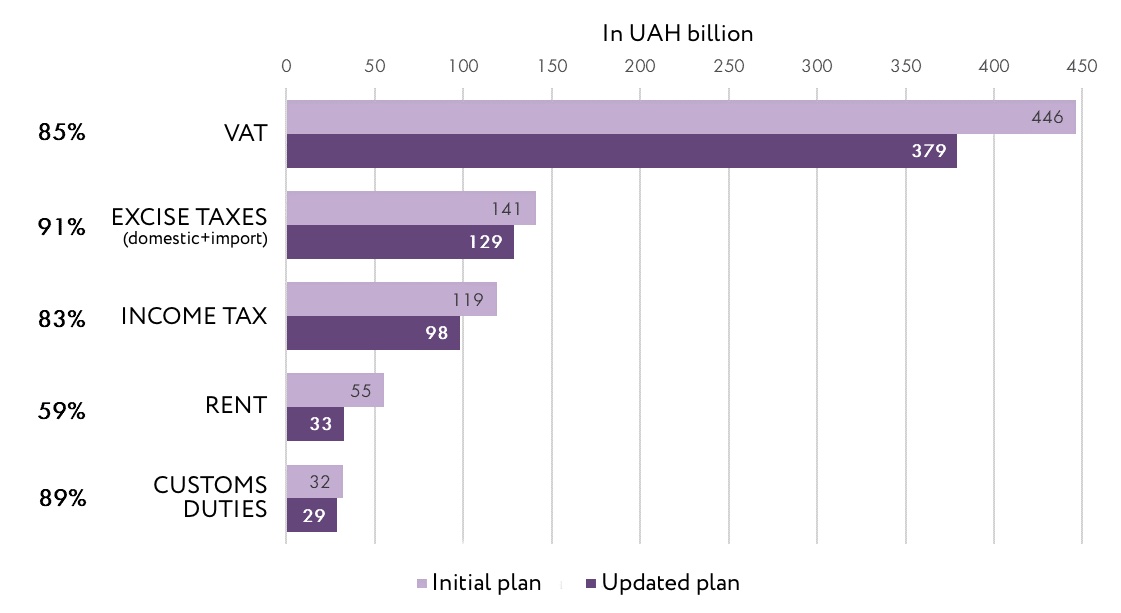 It is highly probable that the actual budget’s deviations from the initial budget will be even higher at the year end.

In point of fact, all macro indicators are now under threat, and there are already first indications that the updated macro forecast and the budget based on it are not relevant. Immediately after adopting  the budget, First Deputy Chairman of the Verkhovna Rada Committee on Finance, Taxation and Customs Policy Yaroslav Zhelezniak said that “there is an understanding that this budget is unrealistic in terms of revenue.” “The plan will not be implemented anyway. At the moment, a lot of companies do not pay taxes or pay less than expected, taking into account crisis factors. As for the state-owned enterprises, there are no grounds to believe that everything will be fine, because the impact of the crisis will reach them too.”

What to expect next

Everything may be worse than expected. There are grounds to believe that the crisis budget adopted in April is too optimistic and will not be executed. Because the economic downturn may be greater. According to the latest IMF forecast, Ukraine’s GDP will contract by 7.7%. Against this background, the -4.8% cited by the Prime Minister look too optimistic.

Oil will strike a blow. Taxation of oil and gas production and imports generates most of the rent, almost a third of customs duties and up to 38% of excise collections. A couple days after updating the Ukrainian budget, there was a big slump in oil spot prices below zero. This was a short-term phenomenon. And a day later, the prices returned to a positive level. However, the general trend toward lower oil prices will remain at least until the end of quarantine, because in order for oil prices to go up, there should be an increase in demand for it. Oil-exporting countries have agreed to cut production by 10%, but global oil demand has been falling three times faster. A 20% production surplus will put pressure on the oil prices in June.

The actual sale price of oil, on which payments to the Ukrainian State Budget depend, dropped from UAH 9,648 to UAH 5,913 per ton in March. And it is likely to continue to decrease, albeit at a much slower pace. Already now the sale price is two times lower than the average price in 2019. Add to this trend a decrease in consumption, and a reduction in “oil and gas” payments by more than half (about UAH 94 billion) can be expected, which is not included in the current budget.

Budget deficit will break all records. Several times a year, the IMF publishes its World Economic Outlook, in which IMF economists analyze global economic developments that may occur in the short and medium term. This document always contains figures that are the easiest to help understand the level of optimism or pessimism about the next 2-3 years – the GDP forecast.

According to IMF’s outlook developed economies (mainly in North America and Western Europe) are projected to have an average budget deficit of 11% of GDP this year. And this under a scenario of constant, gradual recovery, with no new quarantines introduced in the second half of the year.

Developing European countries will suffer slightly less, with the deficit averaging 6% of GDP. The outlook for Ukraine is 8.2% of GDP. 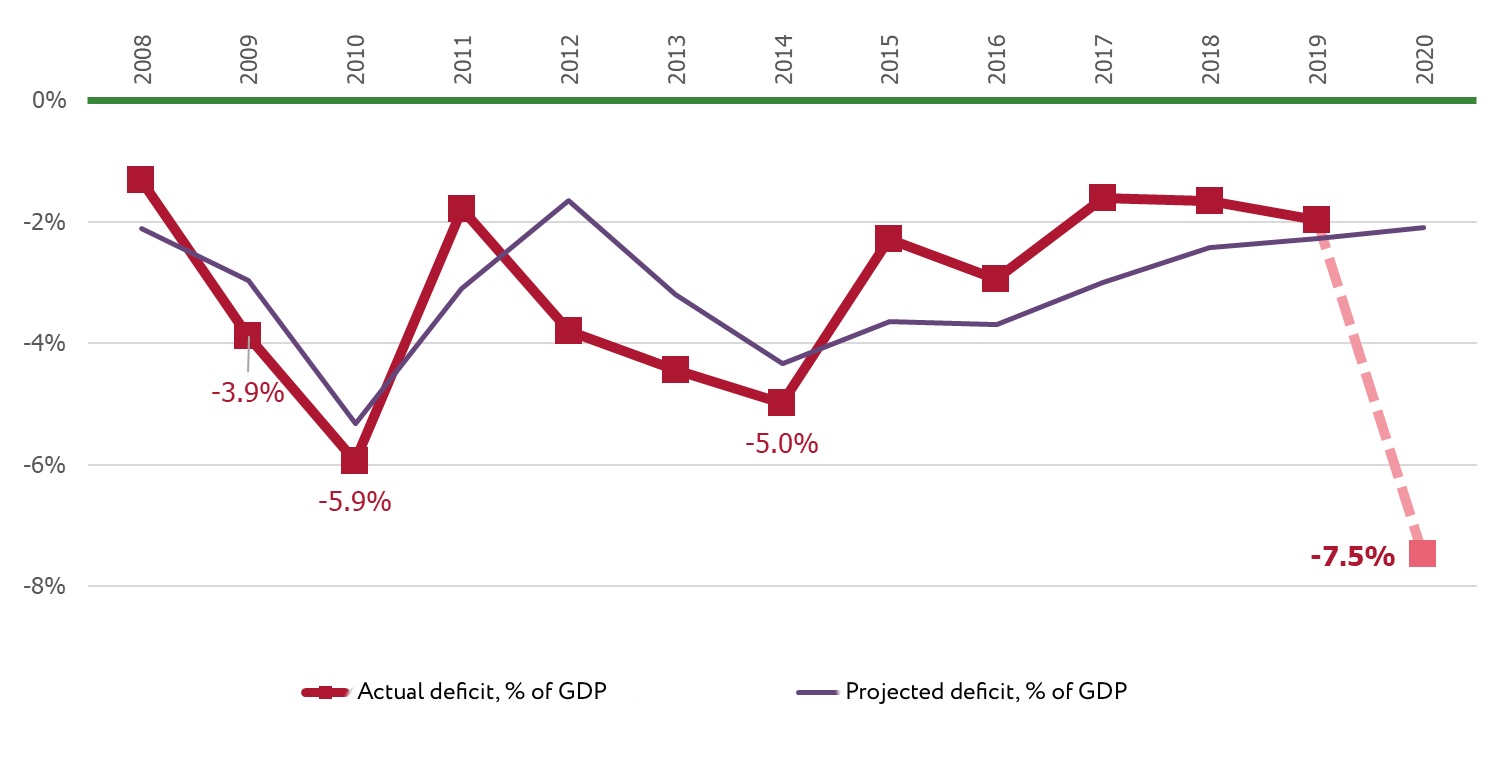 The plan is to get back to the plan. The Ministry of Finance promises to return to medium-term planning next year, but it is hard to predict the quality of this planning. The government is still assuming that real GDP will shrink by 4.8% in 2020, but what is going to happen in the coming years is not known. The macro-outlook for the medium term has not yet been updated and it is likely that it will be possible to do it by the end of the year, at best. So far, the Ministry of Finance claims that high volatility in global financial and commodity markets and uncertainty about the development of global economy this year make it impossible to come up with a reliable macro-outlook for 2021-2023, which should form the basis of medium-term budget declaration.

The material was prepared with the support of the German government, as part of the project “Good Financial Governance in Public Finance III”, implemented by Deutsche Gesellschaft für Internationale Zusammenarbeit (GIZ) GmbH