Ulyana Suprun is an American agent, Soros secretly governs Ukraine, and American labs conduct experiments in the country: according to a recent survey, these seemingly marginal conspiracy theories are believed by a majority of the population of Mariupol.

While the Western world is busy overcoming a wave of coronavirus-related false stories, Mariupol has descended into a maelström of anti-Western disinformation and conspiracy theories, the depth of which most Ukrainians, and perhaps even the government, would find hard to grasp.  The challenge posed by anti-Western views in a city located near the frontline of the Russo-Ukrainian war is complicated – and likely defined – by the incessant flow of disinformation which has flooded the city’s information space for decades. A fresh survey investigates the degree of belief in various local and national false stories and conspiracy theories in order to gauge the vulnerability of the local population to disinformation, and to understand the extent to which these stories are rooted in the city.

The survey was commissioned from the Kyiv-based Center for Social Indicators. It is was conducted within the framework of a joint Norwegian-Ukrainian project supported by the Research Council of Norway (Project 287267, “Ukrainian geopolitical fault-line cities: urban identity, geopolitics and urban policy”), and it is based on a representative sample of 1251 residents of Mariupol aged 18+. The reported results are weighted in accordance with the age-sex composition of the city. For more information, please contact project leader Michael Gentile

Conspiracy theories and Russian narratives find fertile ground in Mariupol. The demonization of George Soros in the Russian media (as well as among alt-right outlets in the United States and in Central Europe) has penetrated Ukrainian public discourse with the support of Russia-leaning media outlets controlled by Viktor Medvedchuk. While the anti-Soros agitation and conspiracy theories have been debunked by numerous media outlets and organizations in Ukraine (eg. Radio Free Liberty, Dzerkalo Tyzhnya, Detector Media, Vox Ukraine, and others), this seems to have had little impact on the general audience in Mariupol.

Graph 1 illustrates the extent to which the city’s residents agree with certain centerpiece claims of the Russian disinformation effort in Mariupol and nationwide. Over two thirds of the survey respondents agree with the statement that “Ukraine is ruled by external forces such as Soros’ and Gates’ organizations,” and one in four completely agree, whereas a mere 8% completely disagreed. As shown in Graph 2, which reports the findings presented in Graph 1 broken by age, elderly respondents are considerably less likely to disagree with this statement, yet even among the younger and better educated cohorts only a minority reject the notion that Ukraine would be ruled by a “shadow government.” Clearly, the Sorosiata discourse enjoys significant support in Mariupol.

Ulyana Suprun, the former acting Minister of Health of Ukraine, an American of Ukrainian origin, survived numerous information attacks during her time in office. These attacks failed to remove her from her post, but they did affect her image.

Suprun’s necessary but unpopular health reform was an easy target for disinformation, and her American background was the obvious anchor point for such efforts. 74% of the respondents agree that she “was placed in the government because the Americans wanted it,” whereas less than ten percent disagree (and only 1.7% completely!). However, the Suprun case also shows that conspiracy theories do not necessarily attract the disproportionate belief of the elderly: in Mariupol, the young are just as likely to believe in the Ulyana conspiracy as are their grandparents. 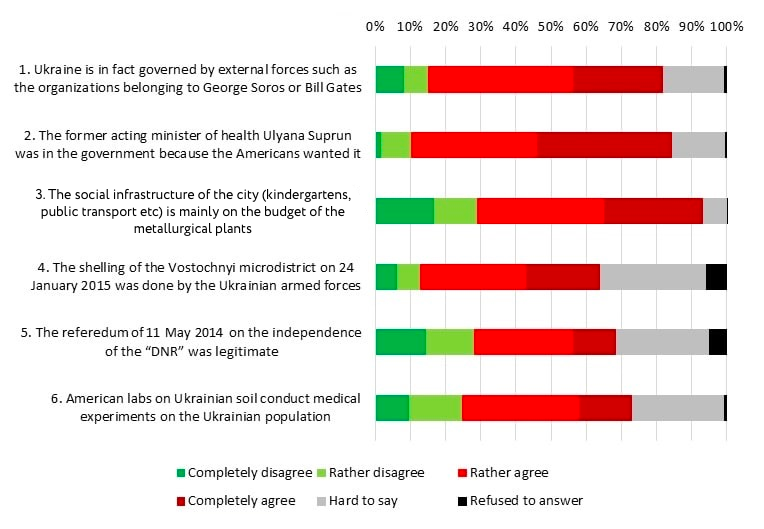 Steel oligarch Rinat Akhmetov remains the key influencer in the region in terms of local politics and (dis)information. He actively uses his media assets to promote his political agenda and to influence public opinion in a direction favourable to him. His approach delivers: Vadim Boychenko, a Metinvest candidate, emerged as the absolute leader in the recent local elections, having gained two thirds of the votes.

Such overwhelming support for the Akhmetov candidate is not surprising considering that almost two thirds believe that the budget of the metallurgical plants (Azovstal and Ilich steelworks) funds most of the city’s infrastructure (e.g., kindergartens, public transport, etc.). This was certainly true during Soviet times, but it has not been the case for many years. However, Metinvest’s symbolic investment into the city’s infrastructure, well-covered in the Akhmetov-owned local media and evidenced by “funded by Metinvest” signs strategically scattered around Mariupol, may leave the impression that the steelworks are the city’s patrons, or khoziaeva. Indeed, 28.9% disagree that this is the case, and as few as 17.5% among those aged 70+. This means that most parents who have their children at a local kindergarten are unaware of the fact that the latter is in fact being funded by taxpayers, and not by Rinat Leonidovich. 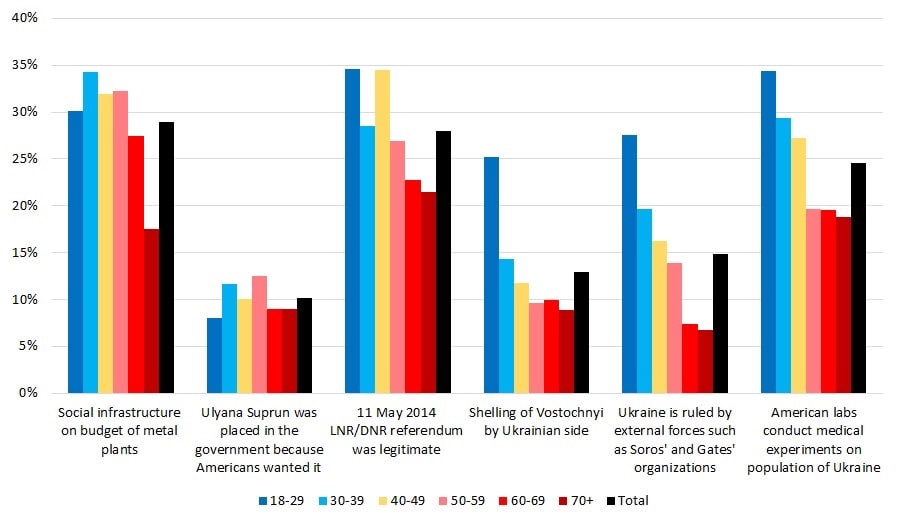 On 11 May 2014, the “Donetsk People’s Republic” (DPR), which more or less controlled Mariupol at the time, organized a referendum on the region’s independence. The result was “overwhelming support” for independence, but the referendum attracted widespread condemnation, both nationally and internationally. By all means, the referendum fell short of the most basic criteria for legitimacy. Nevertheless, there are far more Mariupolitans who view the referendum as having been legitimate (40.5%, rising to 45.7% including those who refused to answer the question*) than there are those who do not (28%). An additional 26.3% retreated into the “hard to say” option, indicating that a whopping 72% of the population are not able to distance themselves from an event that was clearly aimed at undermining Ukrainian statehood. Meanwhile, only 14.5% completely disagreed with the notion that the referendum was legitimate. Presumably, this proportion gives an approximate indication of the size of the “pro-Ukrainian” constituency in Mariupol.

In the immediate aftermath of the artillery attack on the Vostochnyi district in Mariupol in January 2015, the OSCE concluded that the shelling was conducted from an area controlled by the DPR (OSCE 2015). Subsequently, evidence pointed towards the involvement of Russian military personnel in the attack (Bellingcat 2018). Even so, blame attribution is treated rather sotto voce among locally dominant Akhmetov-controlled media outlets, and it is completely absent wherever Rinat Akhmetov’s charity fund is mentioned, as if the deadly rocket attack had been a random act of god. Meanwhile, the Russian media either directly blamed the Ukrainian armed forces, or played the “balanced reporting” card by suggesting that Ukraine blames the “republics”, which in turn deny the accusations. Disinformation surrounding the shelling was rather aimed at blurring the facts than at creating a false narrative ex novo.

The survey results show that this approach was immensely successful. While 30% feel unable to attribute the blame to the one or the other side, it is striking that a mere 12.8% disagree (and only 6.1% “completely”) with the claim that Vostochnyi was shelled by the Ukrainian armed forces. In other words, at least 57.2% (including refused answers, which typically conceal staunch pro-Russian positions) literally believe that the city was attacked by the armed forces that are supposed to protect it. The real figure is probably higher because of potential agreement hidden in the “hard to say” category. However, it is notable that the Vostochnyi shelling disinformation narrative is less successful within the 18-29 age group (25.2% disagree with it). In fact, among the six false statements tested, this is the one that exhibits the greatest inter-generational belief gap.

The ongoing covid-19 pandemic has led to a global “infodemic,” and conspiracy theories about the origin and “purpose” of the virus have spread like a wildfire through dubious alt-news websites, within social network sites, and by the Medvedchuk-controlled media (e.g. here). Nevertheless, Mariupolitans are far less likely to buy into these theories than they are to the more firmly rooted Soviet-style disinformation narratives. For example, only 15% believe that the coronavirus was introduced by Western secret services in order to weaken adversaries. Instead, the city’s population seems far more susceptible to false stories that have had the time to ripen: almost half (48.3%) agree with the claim that “American labs on Ukrainian soil conduct medical experiments on the population of Ukraine,” whereas less than one in four disagree (24.6%). As in the cases of the Soros/Gates shadow government and of the shelling of Vostochnyi, an age gradient is at work, but the conspiracy theory is still popular among all age groups.

Anti-Western and, to a significant extent anti-Ukrainian, disinformation narratives and conspiracy theories enjoy alarming acceptance in Mariupol. Notably, the phenomenon is not limited to age groups socialized during the Soviet period, even though the latter are particularly susceptible to some specific forms. While this situation certainly has multiple causes, the fact that Mariupol is bogged down in a local mediatic Akhmetovshchina, and that it is exposed to the Russian media and to the highly dubious Medvedchuk-controlled nationwide media, certainly does not help. In practice, the Akhmetov media perilously overlook Russian disinformation in Mariupol, and they have largely failed to contribute to the city’s critical informational security situation, despite efforts by certain strongly motivated journalists. A diversification of the local population’s media diet would appear to be the most urgently needed change, coupled with decisive efforts by local government to counter local disinformation such as that surrounding the shelling of Vostochnyi. However, the outcome of the local elections on 25 October 2020 makes such urgently needed changes unlikely.

Data for the figure 1. 95% confidence intervals for proportions in parentheses

* Our previous surveys in Kharkiv and Dnipro indicate that refusing to answer certain politically charged opinion questions is a strong indicator of pro-Russian leanings, and this survey uncovered a similar tendency. In Mariupol, among those who strongly disagree with the statement that Vostochnyi was shelled by the Ukrainian armed forces, almost half say that they would defend the city using nonviolent methods in case of a Russian occupation/invasion, which is about four times higher than the city average of 11.8%, and thus indicative of a pro-Ukrainian position. Among those who strongly agreed with the statement, this share was of 9.2%, whereas it was as low as 5.3% among those who refused to reveal their opinions.