The amendments to the Law on the State Budget, which were adopted by the parliament on April 13, contained many aspects that directly concerned local self-government. It was mostly about reducing subventions to local budgets. But it didn’t end there. The new version of the law abolishes another important norm that directly affects the decentralization process and the powers of the newly created amalgamated territorial communities. This is a rule on the obligation of the Cabinet of Ministers to organize the transfer of ATCs created in 2019 to direct inter-budgetary relations.

Due to faults of legislation a part of these communities has not yet received the financial authorities that are granted within inter-budgetary relations. In addition, pursuant to April budgetary changes they will not be granted said authorities until the end of current year.

Thus, even though, these United Territorial Communities (UTC) have formally been created, they have not yet received the financial instruments to conduct their activities. This is a bright illustration of the importance of coordinated action between different branches of government in implementation of reforms, without which the risks of “stalling” and discreditation remain extremely high.

Since the beginning of decentralization in 2014, the government has passed a number of legislative acts and has created a system of support for the development of united communities. In 2015-2019, 982 UTCs were created in Ukraine, with a population of 11 million persons (Fig.1).

The founding principle of successful UTC functioning is sufficient level of financial support necessary to perform the tasks and functions foreseen for local self-governance bodies by the state. At the moment, the government is providing financial support to not yet united villages, towns and cities via district budgets by redistributing the funds on lower levels.

As part of financial decentralization, the newly created UTCs switch to direct inter-budgetary relations, i.e. start receiving state funding directly from the state budget as subventions (targeted inter-budgetary transfers) and can use them independently within their authority. In addition, 60% of income tax is allocated to the community budget. It is one of the most important resources for filling up local budgets.

The remaining 107 communities did not switch to direct relations with the state budget and for this reason still cannot function properly (Table 1).

Fig. 1 Number of UTCs across the country, region-wise distribution 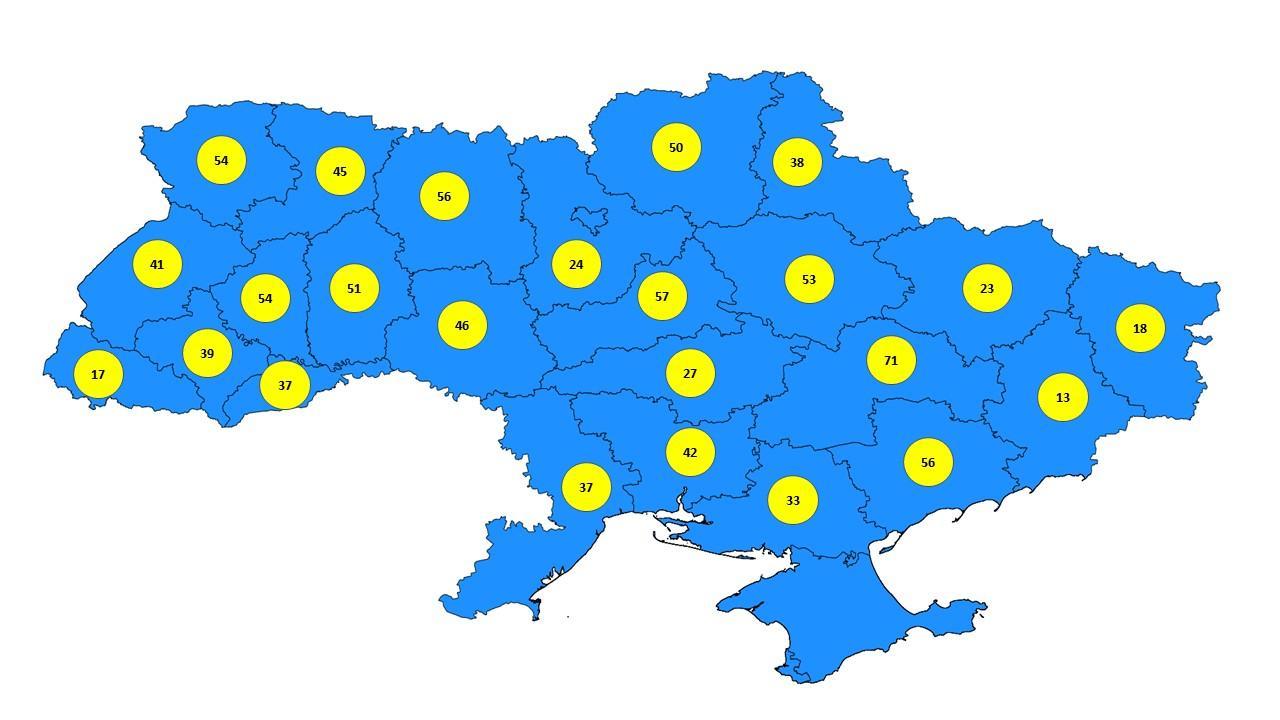 Source: Data of the State Treasury.

Why did it happen?

The switch to direct inter-budgetary relations presupposes several stages. First of all, the newly created community should be deemed viable by the government and elections should be set there. Viability is determined according to the Law of Ukraine On Voluntary Unification of Territorial Communities and the Methodology for creating viable territorial communities. After that the Ministry of Finance includes viable UTCs into the list of those switching to direct budgetary relations and the draft law on state budget. In reality, the procedure has not been followed , and the three events necessary for creation of a UTC (recognition of viability, elections, switch to direct relations with the state budget) happened in provisional order. For instance, Vesniane UTC (Mykolayiv region) was created on 18 December 2016, it switched to direct inter-budgetary relations in 2017 and was deemed viable only in 2020. On the other hand, Putyvl UTC (Sumy region) was deemed viable in November 2018, elections were held there on 29 December 2019, while it still has not switched to direct inter-budgetary relations.

The law does not regulate the deadlines for deeming a UTC viable. Probably, that is why identification of viability happens quite chaotically – a newly created UTC simultaneously submits documents to have elections set (to the Central Election Commission), to be deemed viable (to the Cabinet of Ministers of Ukraine) and to be included into the State Budget (to the Ministry of Finance) and each of the said bodies completes their part of work whenever they can, without coordinating their work with other bodies. This makes the timeline for the switch of communities to direct inter-budgetary relations quite unpredictable. For instance, out of the 157 UTCs where elections were conducted in 2019, 101 were deemed viable in 2020 (Table 2), while the Law On State Budget was passed on November 14, 2019.

In addition, budgetary legislation has been amended throughout the process of decentralization. During initial stages of the reform it was important to provide as much support as possible to unification (give the right to be created even to those communities which are clearly non-viable) so as to show qualitative changes and opportunities, which the reform offered. That is why before 2019 determining of viability happened virtually automatically.

But in 2019 the government decided to comply with the procedure and not to include UTCs to the budget unless deemed viable. That is why these UTCs did not switch to direct inter-budgetary relations starting from 2020.

Despite this, final provisions of the first draft law on budget (before the amendments of April 13) stated that before February 1, 2020 the Cabinet of Ministers was to submit proposals to the Verkhovna Rada on introduction of changes to the State Budget of Ukraine 2020 in regard to relations between state budget and the budgets of united territorial communities.

Relevant proposals were not registered on the Verkhovna Rada website before April. With April amendments to the budget said norm was excluded altogether, and the switch of UTCs to direct inter-budgetary relations was postponed until 2021.

What will the communities do?

Therefore, the budgets of local councils, which became part of the UTCs created in late 2019, but were not included into the Law оn State Budget 2020, follow separate rules until the end of budgetary year 2020 pursuant to the requirements of Article 8 of the Law of Ukraine оn Voluntary Unification of Territorial Communities. Within the context of Budget Code of Ukraine, their status remains the way it used to be before the elections.

These communities will receive revenue foreseen by Article 69 of the Budget Code of Ukraine (without income tax) and will incur expenses foreseen by Article 91 and Clause 20 of the Final and Transitional Provisions of the Budget Code. This means that the communities will maintain pre-school institutions, local centres and houses of culture, entertainment centres, libraries, local self-governance bodies themselves, and will develop social security and social welfare programmes etc.

These UTCs will not receive basic subsidy (or will not transfer the reverse subsidy to the state budget), educational and medical subvention from the state budget as well. As a result, they will not bear expenses that are normally covered by subventions – those on education, healthcare, social security and social welfare (on a larger scale), state cultural and educational, theatre and entertainment programmes, physical culture, sports etc. In other words, if these communities have a school or an outpatient department, then in 2020 they will still be funded from the district budget.

Thus, residents of the communities believed in the reform, complied with all the procedures – meetings, discussions, making the decision and its approval by the Regional State Administration, setting the elections by the Central Election Commission and the elections themselves, but, as a result, nothing has changed in their authorities and resources. They became a mere “large village council” with several old budgets. Since the financial resource is missing, the communities were not given the authorities of a UTC.

Table 2. UTC deemed as viable, which held the first elections in 2019

* one of the two communities – Vesniane UTC was created back in 2016, yet it was deemed viable in this Decree

Source: relevant Decrees of the Cabinet of Ministers

The importance of synchronization

The switch to direct relations with the state budget is a vivid example of the importance of quality synchronization of decentralization and budget planning processes. On the one hand, the communities will not be able to start working “full mode” in time as they were supposed to – and as locals had hoped.

At the same time, if the Ministry of Finance tried to switch those communities to direct inter-budgetary relations back in early 2020, they would have faced many other problems.

For example, according to Budget Code, 60% of revenue from the income tax should be transferred to the UTC budget. Yet, when the Law on State Budget 2020 was drafted, said revenue was already factored into revenues of district budgets which existed prior to unification. District budget foresees certain expenses that are covered by this revenue, including secured items of expenses (salaries, utilities, food, medicines etc.), which should be made by all costs. That is why redistribution means taking this money away from district budgets.

The other problem is that all budgets of UTCs listed in the Appendix to the Law of Ukraine on State Budget of Ukraine 2020 have been taken into account when determining the scope of adjustment mechanism – base and reverse subsidy. The change in the number of budgets in this case will mean change in the status of some of them from “reverse” (“donor”) to “not subsidized” or “subsidized” (receiving base subsidies). A share of funds has been redistributed in the first months of the year, and in case of change of budgets some funds would be transferred from the local budgets to the state budget or from the state budget to the local budget. At the same time, a part of funds has already been spent, they have been used to cover expenses.

Finally, the communities which had the first elections in 2019 but did not get proper budgetary authorities, basically wasted state budget funds and people’s time on elections but did not get the expected changes for their territories. In October 2020, as part of the national local elections, these communities will be choosing their governors again. This means that local heads elected in 2019 will remain ceremonial bystanders (if, of course, they do not get elected again).

A situation like this is unlikely to repeat. A draft law No. 3614 has been registered at the Verkhovna Rada on the initiative of several people’s deputies from the presidential party. The draft law contains changes to the Budget Code of Ukraine pertaining to budgets of territorial communities. If the parliament supports the draft law, then after the creation of united territorial communities across Ukraine (which should be the result of elections planned for autumn), the UTCs will be able to form their own village, town or city budgets in a new, more large-scale format. Starting from the new year they will switch to direct inter-budgetary relations and by this will complete the first stage of decentralization process.

Future territorial communities (new united village, town and city communities) will cover the whole territory of the country and will get equal authorities after switching to direct inter-budgetary relations with the state budget. In addition, the notion of “united” will disappear by itself since starting from the new year there will be no other communities left but for those united.

But if this draft law does not get adopted, then to avoid the risk of history repeating itself with lack of direct budgetary relations in 2021, the situation should be regulated by law in advance. In particular, the law should foresee compulsory inclusion of all UTCs where elections have been held in the current year into the State Budget for the next year.

The situation described above attests to the importance of synchronization and coordination of the activities of all branches of government, particularly where it refers to compliance procedures of the budgetary legislation. Under the circumstances of already limited financial resource in Ukraine, we have no right to lose even more due to legislative or procedural faults.

Gender and Resilience: a Year of Pandemic in Urban Ukraine