Ukraine under attack  after February 24th, 2022

Although Ukraine has some problems with slow economic development and corruption, our country managed to protect democracy and freedom of the press as well as introduce some growth-enhancing reforms, something that the Kremlin could not stand. While the conflict with Russia has been ongoing since 2014 with the annexation of the Ukrainian Autonomous Republic of Crimea and occupation of parts of  Donbas, it did not directly affect the rest of Ukraine, except for significant flows of internal migration and losses among the Ukrainian defenders from other regions. The situation changed dramatically in the early hours of February 24, 2022, with massive airstrikes on critical infrastructure throughout Ukraine (including the capital Kyiv) and large-scale ground attacks from Belarus, Russia and Crimea.

Thousands of victims of bloody massacres by Russian troops in Bucha, Irpin’, Mariupol’, Izium, Olenivka call for a prosecution of kremlin war criminals in Hague. The aggressor will also pay billions of USD in reparations for destroyed schools, hospitals, bridges, power plants, houses and all other damaged property in Ukraine. This will hopefully cool down future “liberators” of fallen empires. However, in addition to direct impacts, such as physical damage to people’s lives and health and infrastructure, the war has also led to forced displacement, poverty and unemployment in Ukraine, not to mention far reaching consequences for the most vulnerable populations worldwide who now face increasing energy and food prices.

The economic consequences of Russian aggression are devastating. The World Bank estimates Ukraine’s GDP to decrease by 35% in 2022 under the current status quo without additional economic shocks. Although it is difficult to assess the impact of war on poverty, the baseline prediction implies that Ukraine’s poverty rate based on the $5.50 per day threshold will increase from 1.8% in 2021 to 19.8% in 2022. An alternative earlier estimate from the United Nations Development Programme (UNDP) suggests that up to 90% of Ukrainian citizens could be facing poverty and extreme economic vulnerability if the war escalates. The International Labour Organization (ILO) estimates that 4.8 million jobs have been lost with respect to the pre-conflict situation, which is equivalent to 30% of pre-war employment in Ukraine.

Previous literature has identified ways in which wars can worsen socio-economic outcomes such as poverty and unemployment. In particular, military conflicts lead to killing and injuring people, damaging infrastructure, destroying institutions and breaking up communities and networks (Justino 2012). Breakdown of families and their social protection mechanisms caused by displacement, which affected millions of Ukrainian citizens, and fighting are  contributing to poverty. Forced displacement can also lead to increased unemployment. Torosyan, Pignatti and Obrizan (2018) show that internally displaced people (IDPs) in Georgia are up to 11.6 p.p. more likely to be unemployed.

A new working paper by Obrizan (2022) discussed here, analyzes the effect of the full-scale Russian aggression on poverty and unemployment in Ukraine three months into the full-blown conflict. While the effects of the war, such as Kremlin airstrikes and mass migration, can be seen across the entire country, it is likely that areas directly involved in the fighting on the ground suffer even more. Hence, a comparison of such regions with other regions of Ukraine before and after February 24th, 2022 will provide a causal effect of ground attack on socio-economic outcomes.

The effect of ground attack on poverty and unemployment

The regions with direct fighting (Ground Attack) have been identified using the DeepState Map (but results are consistent with other sources) and include Kyiv, Sumy, Chernihiv, Donetsk, Luhansk, Kharkiv, Zaporizhzhia, Kherson and Mykolaiv regions [3]. The models are estimated using a difference-in-difference approach with the interaction term Year 2022*Ground Attack showing the direct effect of the ground conflict in the region on poverty and unemployment in 2022 [4]. The most interesting results (provided in the Appendix) are from Table 4 showing the effect by gender and presence of higher education, with the full set of results being available in Obrizan (2022).

The gender gap in employment contradicts the results in Brik and Obrizan (2022) who find no evidence of “she-cession”, that is higher chances of females to quit jobs, during COVID-19 epidemic in Ukraine. While telecommuting could be a mitigating factor for females during COVID-19, it was probably not very helpful during the full-scale war when many enterprises were physically damaged and many Ukrainian women with children still remained internally displaced which could have limited their chances to preserve jobs over the long distance.

Indeed, the respondents in regions which experienced fighting on the ground were 13.9 p.p. more likely to change a city of residence after February 23rd, 2022. [7] While this forced displacement did not have a separate statistically significant effect on self-reported extreme poverty, it was associated with an additional 7.5% points higher probability of self-reported unemployment.

This study adds to the existing literature on the effect of wars on poverty and unemployment and is one of the first to establish the causal effect of the full-scale russian aggression on the worsening socio-economic status of Ukrainians who experienced the brutal fighting on the ground in their home region.

The negative effects of the full-scale war on poverty and unemployment mostly on females is also observed in many robustness checks. For example, probability of poverty remains higher in the regions with fighting on the ground in the sample with females only (by 6.6-6.7% points) but not males only and only for respondents without higher education (by 6.0-6.3% points) but not for respondents with higher education. In the full model with all observations the negative effects of the war on poverty and unemployment remain statistically significant. It also remains robust in samples divided by median sample age of 48, although with a lower significance in the older subsample. [8]

These models indicate a strong gender gap in the effect of the full-scale war making women without higher education the only group with elevated chances of lacking money for food. Hence, domestic and international programs of social support should focus on this group in the regions experiencing ground attack. Likewise, higher education is not protective for preserving jobs for females (unlike males) calling for targeted support from authorities and humanitarian groups.

As with any research, it is worthwhile to discuss potential limitations of the study. First, the survey in May of 2022 excludes respondents who left Ukraine after February 23rd, 2022. However, it should not be a major problem because the descriptive statistics for respondents (such as age, gender, place of residence etc) are not substantially different between 2021 and 2022. The Omnibus survey also does not include many characteristics that may affect the probability of being poor (such as a household composition with the possibility of cross-insurance by family members) or unemployed (for example, indicators for a closure or relocation of an enterprise). But the results remain remarkably stable with only the set of difference-in-differences indicators, in a model with the full list of covariates and also in the robustness checks. In addition, kremlin rocket and drone terror of regions far from the frontline, such as an attack on June 27th on the Amstor shopping mall in Kremenchuk with many victims, has intensified after May 2022 considered in this study. While these concerns should be addressed when comprehensive surveys become available, this study provides a stable initial estimate of the war effects on poverty, unemployment and internal migration three months into the full-scale war. 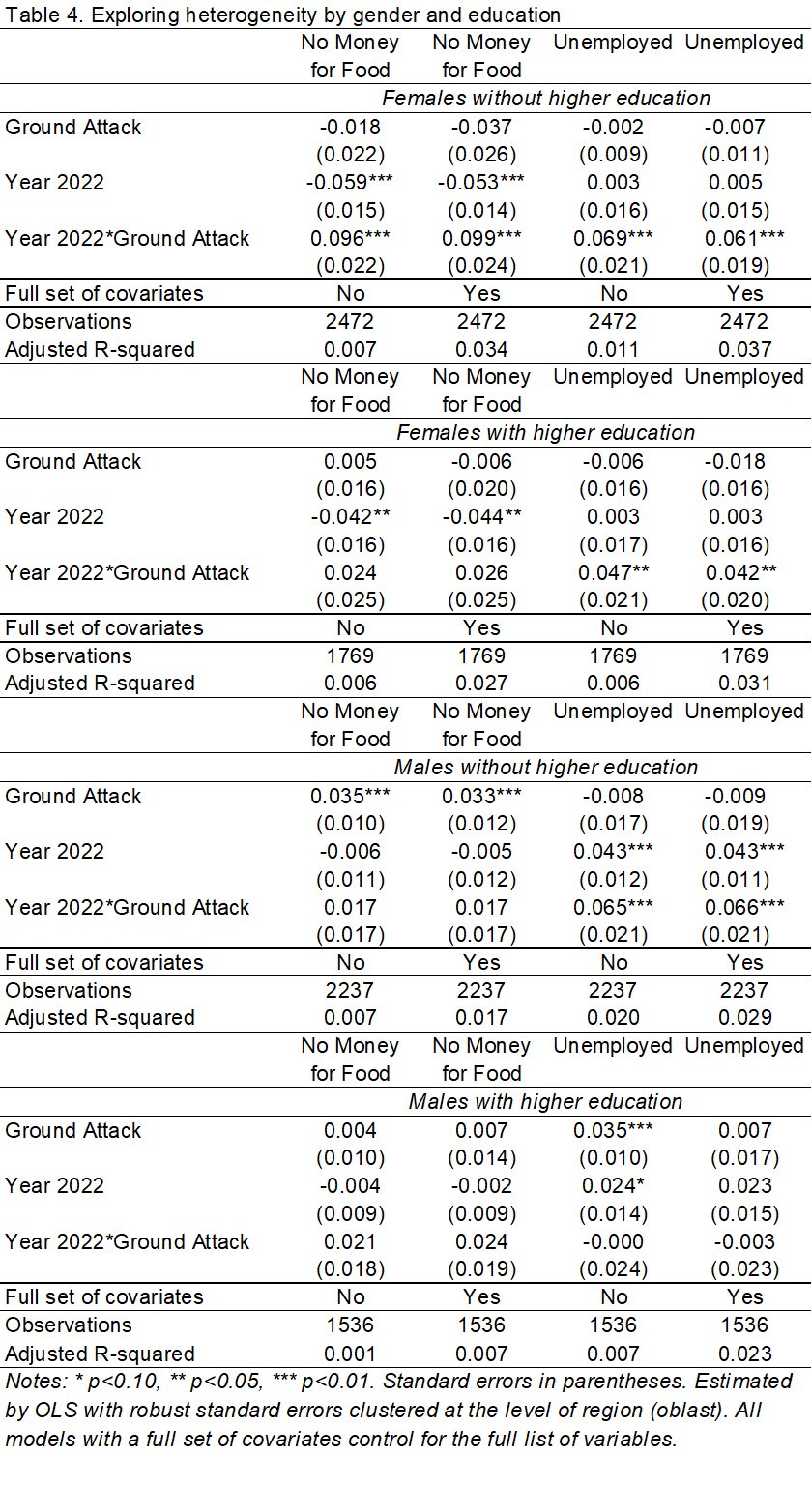 [1] The author would like to thank the team of Kyiv International Institute of Sociology (KIIS) and, especially, Yulia Sakhno and Victoria Zakhozha for providing access to the data. All remaining errors are mine.

[3] Very small parts of Zhytomyr and Poltava regions are also identified by DeepState Map as having direct ground fighting, but they are excluded because of a very small percent of the area which was directly affected.

[4] While it is not possible to test for the parallel trend assumption, the evidence seems to point to a higher likelihood of this assumption to hold for smaller time periods which is just one year in the current study.

[5] Future studies should also consider the effect by marital status and presence of pre-school and school children because such information is not available in the current survey.

[7] These results are limited to the year 2022 only because the question about relocation was not asked in 2021.

[8] The survey contains a separate category for retirees which is mutually exclusive with the unemployed.