Ukraine, its people, infrastructure and economy have suffered immense damage since Russia invaded at a full scale in late February. As Ukrainian forces continue to push back the Russian army, the debate regarding the reconstruction of Ukraine has begun.

All of this infrastructure has suffered immense damage due to the Russian attack, with latest estimates of damages to infrastructure totalling USD 105.5 bn. Whilst Ukraine must be strongly supported in reconstructing damaged and destroyed assets, we argue that reconstruction should not recreate the old fossil-based pre-war assets. A green reconstruction that replaces old power stations or steel plants with new, green ones and energy-inefficient houses with modern, thermally insulated ones, is vital to Ukraine’s interest and energy security in the future.

Pre-war drivers for greening the economy

Even before the war, decarbonisation was increasingly understood to be an imperative for Ukraine.  As renewable energy sources (RES) are being rolled out more and more across the globe, costs for RES and production techniques relying indirectly on renewables keep falling compared to old fossil-based production techniques (figure 1). Indeed, without accounting for issues caused by its inherent volatility, capital costs for solar energy are already below those even of gas power – on top of the huge operating cost difference between free solar energy and costly gas fuel. 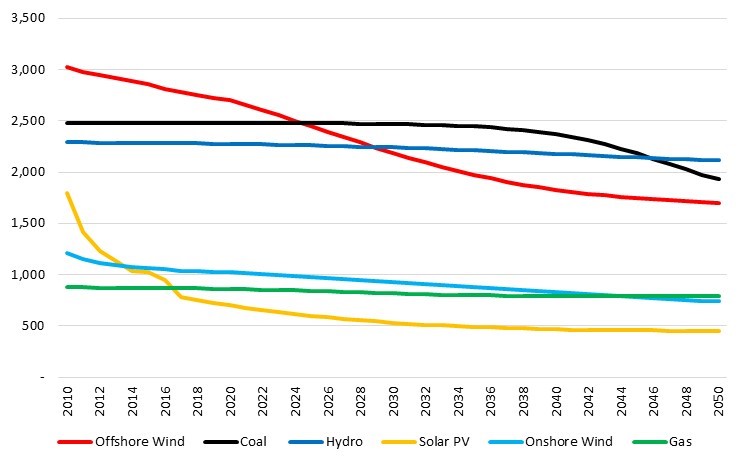 While in some areas such as industry, shipping or aviation, zero-carbon technologies are not yet in such a mature state, the continuous change of cost dynamics towards green technologies will continue in the future – sped up by increased efforts to decarbonise due to the new geopolitical situation (e.g. the European Union’s REPower EU Plan to decrease fossil fuel imports from Russia by 66% before the end of 2022 and end dependence fully by 2027).

Several aspects of the fossil-based economy in Ukraine were already known to be uneconomic before the war – notably the coal mining industry with especially the state-owned coal mines generating massive operational losses and the hugely energy-inefficient stock of public and residential buildings. Plans for a “just transition” to end coal mining and use in a socially responsible manner were under development before the war and efforts towards improving the energy efficiency of buildings included the partial liberalisation of gas tariffs, the Energy Efficiency Fund and the President’s announcement of another fund dedicated to energy-efficiency investments.

Ukraine was also subject to considerable policy pressure: The updated Nationally Determined Contribution (NDC), a non-binding plan to contribute to fulfilling the global goals of the Paris Agreement required cutting of greenhouse gas (GHG) emissions by 65% in 2030 compared to 1990 and reaching carbon neutrality by 2060. In addition, membership in the Energy Community entailed the necessity to implement further EU environmental regulations such as the Industrial Emissions Directive. And the EU’s planned “Carbon Border Adjustment Mechanism” (CBAM) would put heavy tariffs on unpriced CO2 emissions in exports to the EU.

The war has sent shockwaves through the global economy. As Western economies are putting sanctions on the Russian economy and Russia is attempting to exploit the dependency of European countries on Russian fossil fuels (especially natural gas) as a strategic instrument, prices and price volatility for many fossil energy carriers have skyrocketed. In the context of ongoing geopolitical tensions, economic dependency on imported fossil fuels implies a huge price risk for any economy, compared to essentially capital-cost-only energy from RES (see fig. 2 and 3). 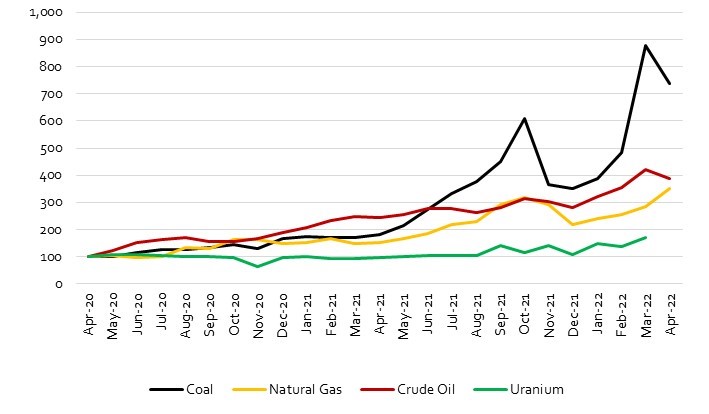 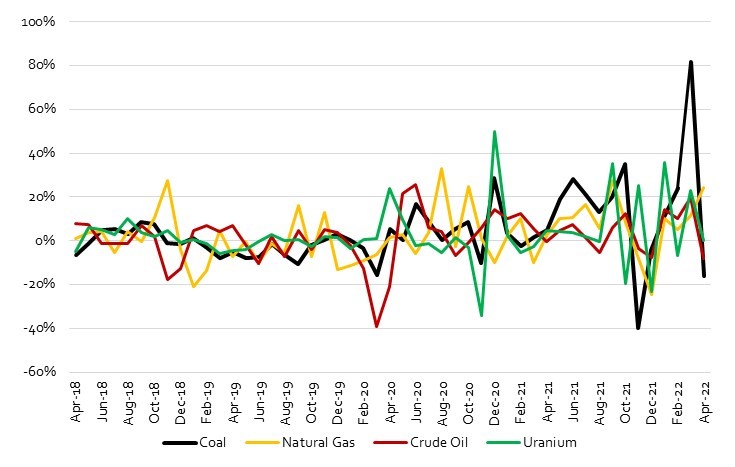 For Ukraine, the risk of continued dependence on fossil fuels (see fig. 4) extends considerably beyond price risks. Russia has been a key supplier of fossil fuels – especially coal (roughly ¼ of domestic consumption) and oil (more than 50% imported directly or indirectly – via Belarusian refineries – from Russia). Ukraine imports about 1/3 of domestic consumption, the rest is produced domestically. Since 2016, Ukraine officially no longer imports gas from Russia, but buys it from EU countries via “reverse flow”, and those countries, in turn, buy some part of their gas from Russia. However, most physical gas imports enter Ukraine via the Ukraine gas transit from Russia. Replacing Russian imports by other suppliers would not be easy, especially in the case of natural gas requiring respective pipeline infrastructures.

Finally, Ukraine submitted its application for EU membership on February 28th. Eventual accession to the EU would imply a considerable strengthening of ecological policy requirements. In particular, this would involve implementation of the EU’s Emission Trading System (EU-ETS) for large polluting plants, corresponding regulations (or an ETS 2 under construction) for the emissions by smaller polluters and a host of regulations such as on energy efficiency in buildings.

Technologies and organisation for green reconstruction

In sum it becomes clear that green reconstruction is a necessity to ensure the survivability and competitiveness of Ukraine’s economy going forward. However, what exactly will green reconstruction be and how should it be organised? Mainly, green reconstruction should mean replacing destroyed or damaged assets linked to an old fossil-based economy by new technologies. Possible candidates are shown in figure 5.

Across the board, it is to be expected that the up-front investment costs of many of the green technologies will be higher compared to the old technologies. Economic savings will mostly occur throughout the life-cycle of the assets as energy or fuel costs are lower compared to the old technologies. And while some of the green technologies are clearly economically preferable over the old assets (e.g. electricity production based on RES rather than coal), some technologies are still in earlier and costlier stages of their development cycle – such as DRI-EAF steel production. For some sectors, choices will need to be made.

This presents some challenges that will need to be addressed in the design of a green reconstruction programme for Ukraine: What technologies should be preferred, how should technological choice be organised and how could higher upfront costs for green technologies be financed? In cooperation with Ecoaction and Bankwatch, Low Carbon Ukraine has organised a roundtable of Ukrainian civil society and industry opinion leaders on the 31st of May to delve deeper into these issues. The results of this discussion will be published here shortly. What is already clear is that green reconstruction is not a luxury, but an economic necessity for Ukraine.

This article is based on this Policy Briefing of the Low Carbon Ukraine project, part of the International Climate Initiative (IKI) and isfunded by the German Federal Ministry for the Environment, Nature Conservation and Nuclear Safety (BMU).