High inflation is destructive for the economy for many reasons. Most importantly, with high inflation, inequality rises sharply as nominal incomes of different groups of population adjust differently to a new price level. In Ukraine, growing inequality already becomes evident from official wage and pension data.

On May 6, the State Statistics Service of Ukraine (Ukrstat) published inflation figures for April, which showed that Consumer Price Index, a standard measure of inflation, accelerated to a multi-decade high of 60.9% year-on-year (Figure 1). The last time Ukraine had such a high annual inflation was in September 1996, the birth month of the Hryvnia. After the adoption of hryvnia, Ukraine never had annual inflation higher than 30%, except for two brief periods, in late 2000, and mid-2008.

Why did it happen? What does it mean? And what needs to be done? 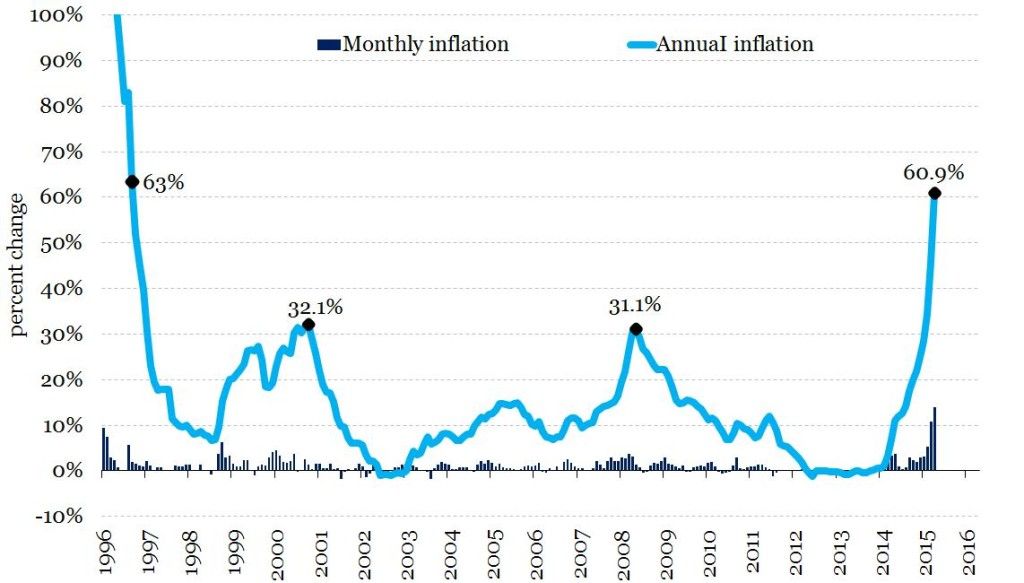 There were two fundamental factors behind the rise of inflation over the past year. 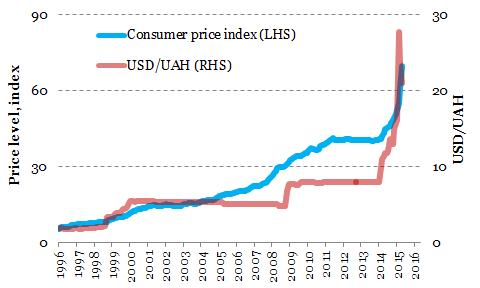 High inflation is costly for the economy…

Low and stable inflation (consensus puts it at 3-5% per year) is generally perceived to be good for the economy for it creating stable and predictable environment for producers and consumers. If inflation pressure intensifies beyond the low and stable level,  especially as a result of external shock, it becomes destructive for the economy for many reasons, such as planning uncertainty, ineffective capital allocation, distortion in economic incentives, redistribution of income and wealth, menu costs. Most importantly, with high inflation, inequality rises sharply as nominal incomes of different groups of population adjust differently to a new price level. In Ukraine, growing inequality already becomes evident from official wage and pension data. Average monthly wage went up by around 14% y-o-y in March 2015, with some sectors with traditionally low salaries  (like healthcare, education, public administration) registering growth of 3-5% only, and others having relatively high salary level, namely trade , IT, seeing a rise of over 40%.

Low- and most of middle-income population, that typically has fixed incomes in local currency (pensioners, budget sector employees, students, etc) and limited savings, suddenly become impoverished and is forced to compress its consumption towards the most basic necessities. At the same time, wealthy individuals, usually having larger and inflation-protected incomes and savings (real estate, foreign currency cash), suffer little or even gain. Their consumption, whatsoever enhanced, is unable to compensate for the loss of consumption by the poorer population. This aggravates the contraction in the economy and creates social tensions.

Current crisis has already highlighted this challenge. For instance, during 2009 crisis, that followed several years of credit-led boom, household consumption declined by almost 15% y-o-y, led by the 42% drop in households spending on transport, mainly purchases of imported vehicles. The economy thus endured necessary adjustment following several years of overconsumption. Pattern of consumption decline is different during this crisis. Food consumption, which accounted for around 37.5% of total household spending in 2014, dropped by 14.2% y-o-y last year and was the leading factor of 9.8% decline in households consumption, signaling that consumers are economizing on basic goods.

Sharp increase in inflation thus pose challenges to economic policy, which were not on agenda for the last two decades. Ukraine’s authorities need to revive growth and protect most vulnerable population, but do it in a way, which does not aggravate existing economic problems. For instance, indexation of wages of all public sector employees – a proposal, which has been floated recently – hardly fits these criteria. Significant budget spending will be distributed inefficiently, i.e. to those in needs and not, and will likely lead to higher fiscal deficit endangering fragile exchange rate stability.

In our view, the right policy mix should include the following components:

Authors are grateful to Olexandr Vedeneev for providing valuable comments to the initial version of this post.