After more than two decades of failed attempts to preserve the remnants of the Semashko system, Ukraine finally started some serious reforms of healthcare in 2017. A brutal and unprovoked full-scale aggression by Russia on February 24th, 2022 has put Ukraine and its health care at a great risk. What should be the policy priorities for health after the victory of Ukraine?

Before 1991 Ukraine, like most other countries occupied by Russia, was forced to adopt a centrally-planned “Semashko” health care system which suffered from an inefficient delivery of care, high numbers of non-health personnel, low salaries of health professionals and poor access to modern health technologies (Rechel and McKee, 2009). The Semashko system did have some achievements (like the requirement of annual check-ups for citizens and elimination of many infectious diseases) despite the “leftover” principle of health care financing in the former Soviet Union. However, the declared principle of free universal coverage led to overutilization of services (Obrizan, 2019), over-reliance on hospital care and lack of competition for patients which often characterizes mixed health care systems with greater involvement of private providers.

Two major shocks undermined the stability of the Semashko system after the collapse of communism in the 1990s. First, shrinking fiscal space reduced the ability of governments to spend on health and, second, integration into the global economy increased relative prices, particularly for medicines and energy (Kutzin et al., 2010). Former socialist countries who were lucky enough to join the European Union in 2004 and 2007 gradually moved to a social health insurance (SHI) system funded through employment-related premiums. Ukraine, on the contrary, was trying to preserve the remnants of the Semashko system without having sufficient financial resources and being unprepared for sky-rocketing prices of energy, new medicines and modern medical equipment. As a result, the quality of medical facilities dropped, salaries of medical personnel were ridiculously low and bribes remained common (Obrizan, 2020). 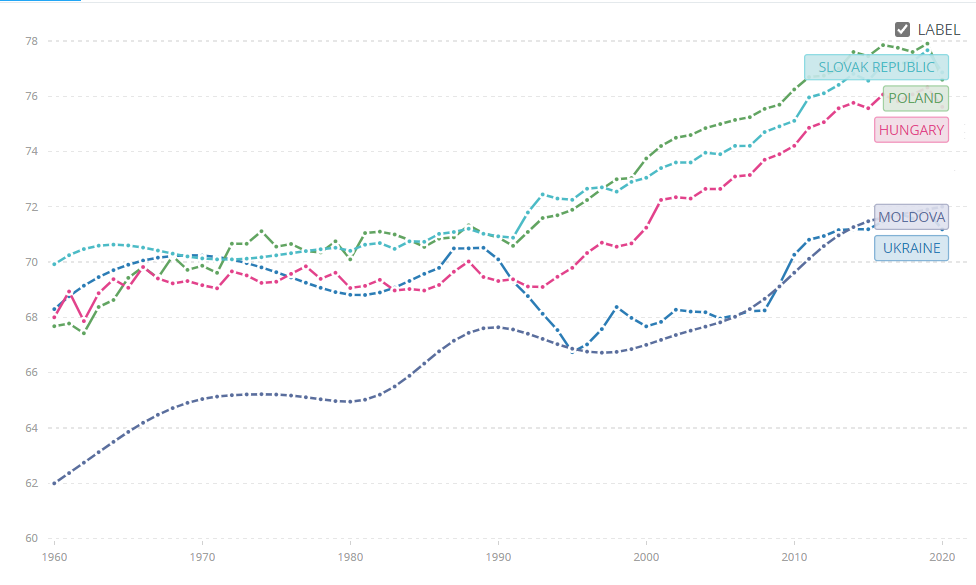 A number of reforms have been implemented since late 2017 when formal laws were passed to build a new patient-oriented healthcare service implementing the new principle of health care financing (“money follows the patient”). Patients obtained the legal rights to sign a contract with a “family” doctor of their choice regardless of the place of registration. Since salary now depends on the number of signed contracts, doctors have strong incentives to ensure that patients are satisfied with their services. Besides, the state provides reimbursement for medicines (“dostupni liky”) for cardiovascular diseases, asthma, and type 2 diabetes. Award-winning government electronic procurement system, ProZorro reduced the loss of USD 2 billion from a public procurement budget of USD 11 billion per year. Decentralization and the President’s “Great Construction” program provided further resources to build and renovate 33 hospitals, 132 emergency departments and 237 rural outpatient clinics in the last peaceful year of 2021. 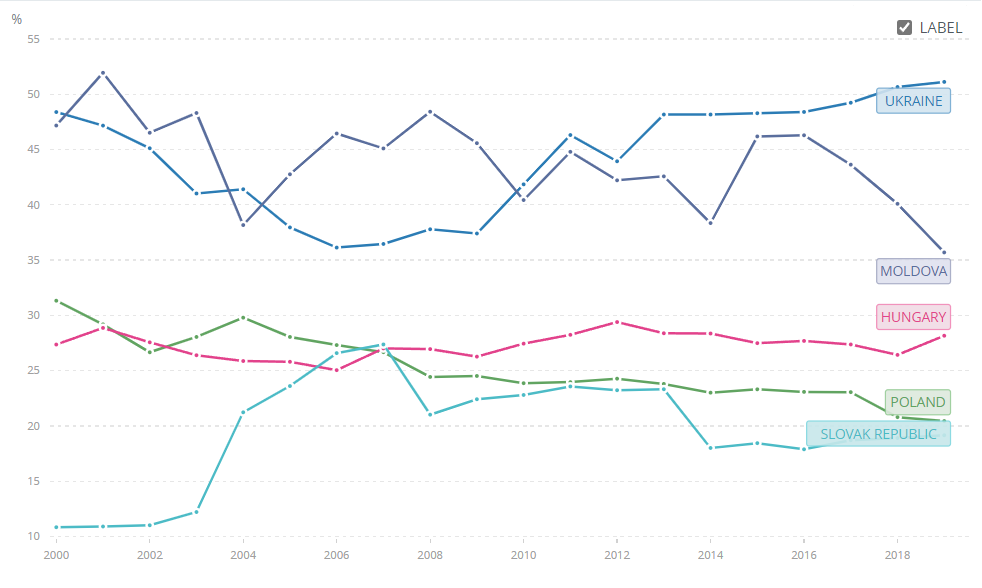 Nevertheless, even when reforms started out-of-pocket health expenditures continued to rise reaching 51% by 2019 which is the highest share compared to neighboring Eastern European countries (Figure 2). This is 15 percentage points higher than the 2nd largest number in Moldova (36%) and more than two and half times higher than in the Slovak Republic (with only 19%). Essentially, patients in Ukraine cover out of pocket more than half of health expenditures which seriously undermines their financial status and limits access to care for the needy patients.

Ukrainian health care during the war

These relatively successful reforms have been brutally interrupted by unprovoked full-scale Russian aggression on February 24th, 2022. Between February 24th and September 3rd, WHO’s Surveillance System for Attacks on Health Care identified 503 attacks (Figure 3) on health care with 129 injuries and 100 deaths. These attacks include health facilities (425 attacks), supplies (144 attacks), transport (72 attacks), personnel (60 attacks), patients (24 attacks) and warehouses (12 attacks). Even these high numbers may be overly optimistic because it is currently impossible to accurately assess the situation in the occupied territories.

Figure 3. Number of attacks on health care between February and August 2022

The Minister of Health of Ukraine, Viktor Liashko, has said in the interview to “RBK-Ukraine” on August 18th, 2022 that 906 health care facilities have been damaged of which 123 were completely destroyed. Hence, the number of completely destroyed facilities is almost 4 times more than the total number of hospitals that were built and reconstructed in 2021! KSE Institute estimated that the total cost of damages in Ukrainian health care reached the amount of $1,6 bln.

Given the size of the damage to health facilities, it may take years to rebuild damaged facilities, especially in the territories that were temporarily occupied. On a positive side, building new facilities from scratch may help to avoid the deficiencies of the Semashko system by adopting the best international practices and technologies.

Challenges and opportunities of health care recovery in Ukraine

A million dollar question is then how should we reconstruct Ukrainian health care after the victory? A recent report by the World Health Organization provides a number of highly relevant policy recommendations for Ukraine. Some recommendations are directly related to the current state of the war and include among others the need to integrate humanitarian assistance with national facility service delivery; to provide modular traning for health workforce for war-related needs such as mental health, sexual violence and physical reabilitation; perform critical short-term hospital renovations incorporating greater energy efficiency.

Other recommendations may have a longer-term focus but we need to think of them already now. One of the most pressing issues is the shortage of medical personnel. Only 0.5% of medical workers (2,273 physicians and nurses) have left the county by June 15th, 2022 according to the current Minister Viktor Liashko. However, Ukraine suffered from a shortage of physicians even before the war. In the midst of COVID crisis in August of 2020 there were 24,700 open doctor positions (including 8,000 in rural areas) according to Maksym Stepanov who was then the Minister of Health of Ukraine. WHO report recommends to attract and prepare for the return of health workers and develop a digital workforce registry.

The demand for health services has changed substantially across different regions of Ukraine given that one third of Ukrainians have been forced to leave their homes since the start of the full-scale war, making it the largest human displacement crisis in the world today. 7 million Ukrainians have become internally displaced people (IDP) and 7 million refugees from Ukraine have been recorded across Europe. As a result of the war 27% of general population  and 32% of IDPs have somebody in a household who stopped taking their medications. Up to 30% of IDPs have issues with access to health care compared to only 9% of the general population. As IDPs and refugees start to return, it is important to rebuild and expand primary health care (PHC) services in the transition from humanitarian assistance (wherever relevant) with parallel improvement of access to pharmaceuticals, trauma, emergency care and public health surveillance.

Even before the war of 2022 Ukraine had the lowest share of government health expenditure in total government expenditure compared to Eastern European countries (Figure 4). Moreover, the share of health in government expenditures has been steadily declining from 8.97% in 2016 to 7.67% in 2019. Naturally, the WHO report discourages Ukraine from further deprioritizing health in public spending even despite the war. A number of initiatives have been already initiated to facilitate financing of health services during the war, a Multi-Donor Trust Fund and Ukraine Humanitarian Fund among others. 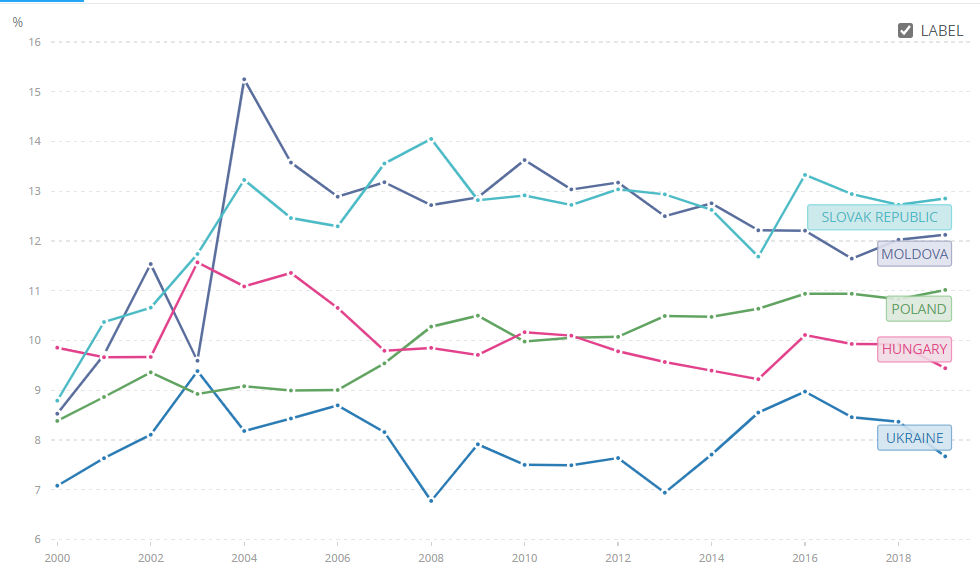 In this short article we reviewed just three recommendations from the recent report by the World Health Organization – on shortage of medical personnel, recovery of PHC and prioritizing health in government expenditure – that may help to reconstruct Ukrainian health care after the victory. The readers are encouraged to review additional highly relevant recommendations from the report.

Disclaimer. The author does not work for, consults, owns shares in or receives funding from any company or organization that would benefit from this article, and has no relevant affiliations.