How will the Recent Decrease in Social Security Contributions Affect the Economy? First Results | VoxUkraine

How will the Recent Decrease in Social Security Contributions Affect the Economy? First Results

At the beginning of 2016 as part of its reform of the tax code, Ukraine reduced significantly the social security contribution (SSC) paid by firms. The payroll tax rate was massively reduced from an average of 44% to 22%. The idea behind this reform is to reduce labour costs, so that firms become more competitive, boosting exports, investment and real wages. A further motivation is to reduce the level of the significant shadow economy in the country. Does it work in Ukraine?

In this article, we present the first results of our projections using a state-of-the-art economic model.

For our analysis, we employ a New Keynesian Dynamic Stochastic Equilibrium Model (DSGE), a mainstream macroeconomic model, which has been specifically tailored for analysing the macroeconomic effects of a reduction in the payroll tax rate. Models of this class are quite good in capturing the short to medium-run dynamics of the most important aggregate variables, but less so for long-run growth dynamics.

We use the model to simulate the impact of the cut in the SSC rate under two scenarios, which differ in relation to the shadow economy. In the first scenario we keep the relative size of the shadow economy constant. The massive reduction in the social security contribution will lead to significant revenue losses (estimated by analysts up to UAH 100 bn, or more that 4% of 2016E GDP [1]), which will be only partially compensated by revenue-increasing measures (e.g. the salary cap on which SSC applies was increased). We assume that a resulting revenue shortfall of 3% of GDP is fully offset by a corresponding reduction in government spending to keep the deficit unchanged. Regarding the modelling of the behaviour of the NBU, we assume it aims at both inflation and exchange-rate stability.

Figure 1 shows the dynamics of the main variables of interest for 16 quarters after the “shocks”. A sketch of the model transmission mechanisms is presented in Figure 2. 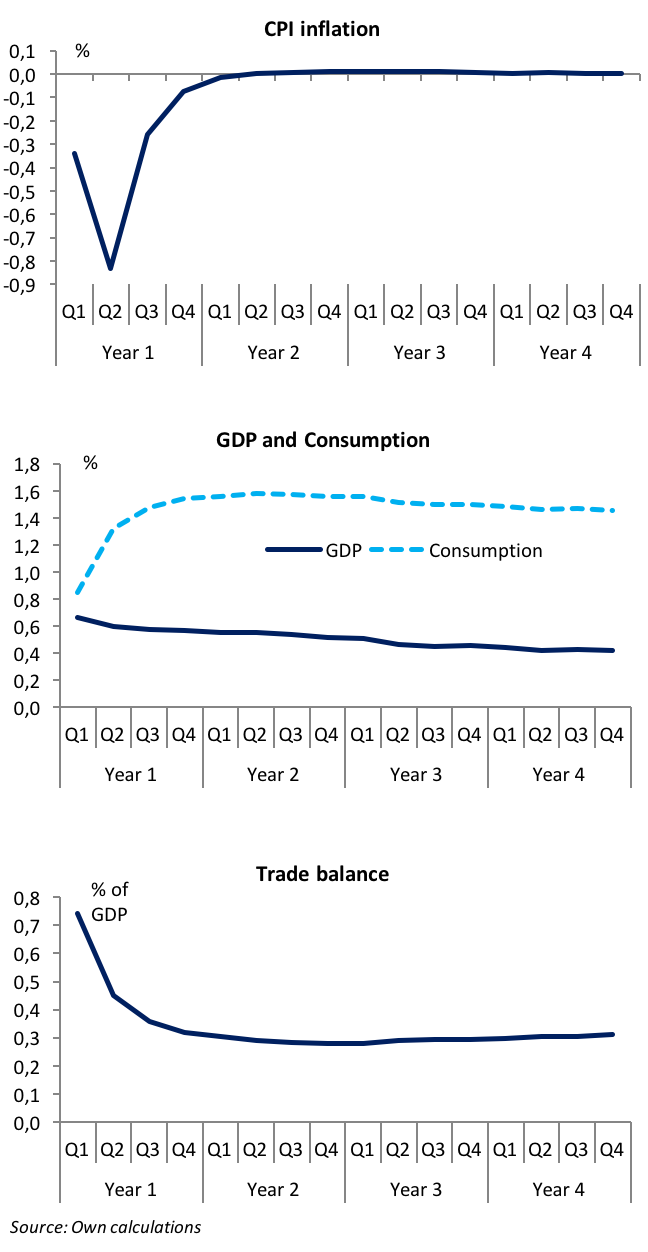 The cut in the SSC rate reduces the costs of production incurring a fall in prices. Lower inflation allows the central bank to reduce the interest rate and also leads to higher real wages. As a result of this, private consumption increases. The trade balance improves because of an expenditure-switching away from the foreign goods and towards the Ukrainian goods caused by the firms’ improved price competitiveness. Because of the reaction of consumption and the trade balance GDP increases.

The (permanent) reduction in government spending required to offset the revenue shortfall from the SSC rate reduction is 2.1% of GDP (lower than the reduction in SSC revenues because of compensating increase in other revenue due to higher GDP). Cuts in government spending lead to lower prices and reduction to GDP (due to lower aggregate demand). Thus, two shocks have reinforcing effects on prices and opposite effects on the GDP. Our numerical simulation demonstrates that positive effect on GDP dominates.

Interested readers should consult the technical note for a more detailed description of the mechanisms at play.

Quantitative effects are as follows: consumer price index (CPI) turns negative to 0.3 and 0.8% in the first two quarters after the shocks. Private consumption rises by 0.8% in the short term and by 1.5% in the medium term. Trade balance (relative to CGP) improves by 0.7% immediately and by 0.3% in the medium term. GDP increases immediately by 0.7%; after several years it is still up by 0.4%.

As was mentioned before, a peculiarity of Ukraine’s economy is the high share of the (untaxed) shadow economy. Recent data by the Ministry of Economy suggest that more than 40% of GDP in Ukraine is created using shadow schemes. We try to simulate the impact of possible reduction in the shadow economy in the second scenario. Here, we assume that 25% of the net wage bill is paid “in the shadow”, and after the reduction in SSC this share reduces (exogenously) to 21%. While a possible de-shadowing would likely be a very gradual process, our model cannot capture its precise path. Simulation results for the second scenario are presented in Figure 3. 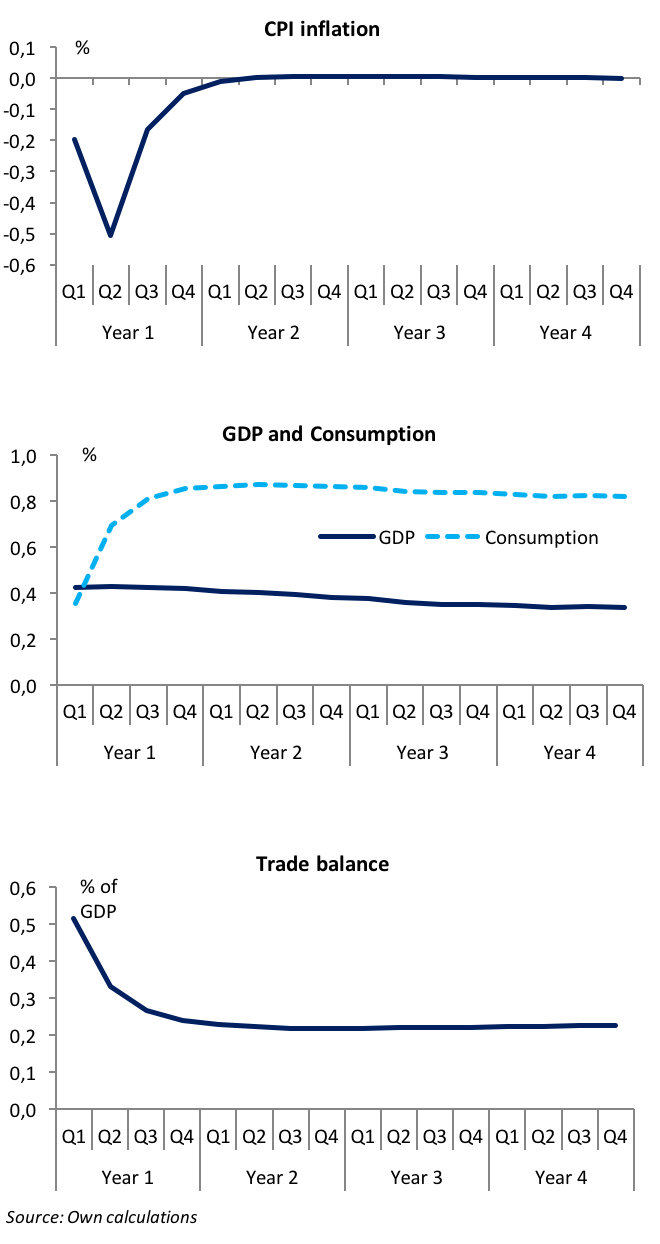 In this “de-shadowing” scenario, all effects are smaller. The intuition behind this is that for those firms that are coming out of the “shadow” production costs are actually increasing and thus net effect on prices and competitiveness is smaller. Furthermore, the deflationary pressure is smaller because the government spending cuts required for budget neutrality are smaller (1.2% of GDP instead of 2.1% of GDP in the first scenario) when a smaller tax cut needs to be offset. This further implies that a) the expenditure switching effect away from foreign and towards domestic goods is smaller and b) the central bank reacts less expansionary so that the private spending increase is smaller. However, this observation should not be understood as an argument against efforts to de-shadow the economy. The benefits thereof are simply not captured well by our model.

Our analysis, which should not be confused with a forecast, shows that there are a number of likely economic benefits associated with the recent cut in the payroll tax rate. While the model is not able to capture all specifics of Ukraine’s economy in full detail, it generally lends support to a reform that targets the high burden of labour taxation in Ukraine.

Furthermore, it could be used in the discussion of different tax (and spending) policies and their corresponding impact on Ukraine’s economy. This would increase impartiality of discussions on this often hotly debated topic among policy circles, academia and the civil society.

About the German Advisory Group

The German Advisory Group on Economic Reforms, which has been active in Ukraine since 1994, advises the Ukrainian Government and other state authorities such as the National Bank of Ukraine on a wide range of economic policy issues and on financial sector development. Our analytical work is presented and discussed during regular meetings with high-level decision makers. The group is financed by the German Federal Ministry for Economic Affairs and Energy under the TRANSFORM programme and its successor.

For further information, please download our recent Policy Briefing “Economic impact of the recent decrease in social security contributions – A model based analysis”.

More information on the technical background of the analysis can be found in the accompanying Technical Note.