Inflation pressure has been dropping in Ukraine since the second half of 2015. This, in turn, affects inflation expectations. More and more participants of the surveys conducted by the National Bank of Ukraine approximate their individual forecasts to the goals declared by the National Bank.

Inflation expectations for the next 12 months, % 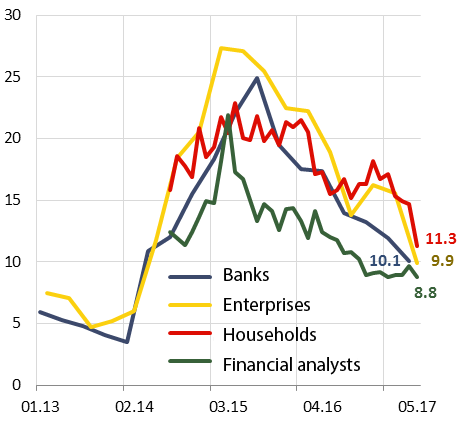 Why are inflation expectations important for central banks?

According to contemporary macroeconomic theory, in the process of economic decision-making, businesses and households first of all pay attention to the forthcoming price change in line with their expectations, rather than to the current inflation indicators. Thus, those households expecting a sharp increase in prices will, most likely, decide in favor of buying durable goods, such as household appliances. Increased demand will, in turn, stimulate increase of prices. Similarly, those producers expecting a rise in prices for raw materials, equipment, or wages might raise prices for their products in the current period to compensate for future losses. Moreover, inflation expectations affect the decision-making concerning investments and savings.

Thus, inflation expectations of households, businesses, and financial organizations become a powerful factor in shaping the current price dynamics. Therefore, they affect the ability of the central bank to achieve inflation targets.

Inflation expectations cannot be monitored directly. Two key methods are used in the international practice to measure them. The first one is based on conducting surveys, when the respondents are directly asked about their inflation expectations. The second one – ‘the market method’ – relies on the indirect assessment of expectations through financial instruments (primarily government securities), which are tied to inflation. However, these tools are underdeveloped in Ukraine, which makes the second method unavailable.

Therefore, the National Bank of Ukraine, like most leading central banks, studies inflation expectations through surveys. The central banks usually conduct such surveys independently or with the help of sociological research companies or statistical agencies. In Ukraine, the survey is conducted within four large groups: households, enterprises, banks, and professional forecasters (financial analysts).

NBU has a considerable experience of assessing inflation expectations:

Unlike the surveys of financial analysts who directly present their forecasts, other respondents are asked to select one answer from the range of values. The latter depend on the current level of inflation. The result of calculations based on the survey data reflects the expected average value of the change in the consumer price index over the next 12 months.

How, do you think, will the level of prices for consumer goods and services in ukraine chance over the next 12 months? (According to the data of the State Statistics Service of Ukraine, in May 2017 the prices grew by 13.5 compared with the same period a year earlier):

The analysis of the available literature highlights a number of factors affecting formation and change of inflation expectations. A lot of research is devoted to the study of the influence of socio-demographic factors, such as age, sex, income level, etc. For example, a fundamental study by Bruine de Bruin et al (2010) shows that women, single persons, and the people who are poorly educated or have a relatively low income, regardless of gender, usually expect a higher inflation rate.

The lion’s share of research is devoted to the issue of whether inflation expectations are adaptive (this theory presupposes that while forming expectations, people rely on the dynamics of inflation over the previous periods) or rational (all available information, both about the past and the future, is used to shape expectations). Although contemporary macroeconomic theory is based predominantly on the rational expectations theory, survey data often differ from the expectations that should be formed by rational economic agents, provided that all available information is used. The use of survey results in the New Keynesian Phillips Curve can help to solve a number of challenges arising in empirical studies when one relies only on the rational expectations theory, as demonstrated in a recent paper by O. Coibion, Yu. Gorodnichenko, and R. Kamdar (2017).

A number of studies note the significant impact of the ‘alternative’ official inflation indicators. Any indicator, which, in the opinion of the public or enterprises, adequately reflects the change in the inflation rate in the country, can serve as an alternative indicator. In particular, according to the estimates of O. Coibion and Yu. Gorodnichenko (2012) in the United States the role of such an indicator is fulfilled by the prices for gasoline. Among other well-known ‘alternatives’ are the change of the exchange rate or the prices of food and real estate.

The level of financial literacy has a significant impact on inflation expectations of households. According to the findings of the research, presented at the open NBU research seminar by F. Rumler, expert of the Austrian central bank, the Austrian households with a comparatively higher level of inflation awareness have more realistic estimates of real inflation values ​​and forecasts of the future development of inflation processes. Taking into account these findings, the authors recommend providing financial literacy trainings to the poorly educated persons, those with low income, and young people in order to anchor inflation expectations.

Situation with inflation expectations in Ukraine

As far as Ukraine is concerned, O. Coibion and Yu. Gorodnichenko (2015) draw attention to an extremely strong correlation between the expected changes in the exchange rate of hryvnia against the US dollar and inflation expectations of households and enterprises. According to the authors, Ukrainians “consider the exchange rate as the key signal of overall price changes in the economy.”

Since the inflation targeting was introduced and the National Bank successfully achieved its inflation target in 2016, we have witnessed a gradual but steady decline in the inflation expectations. Decline is most rapid among the professional forecasters (financial analysts) who have come close to the inflation trajectory forecasted by the National Bank, which should meet the inflation target in the end of 2017 at the level of 8% ± 2%. However, expectations of households and enterprises are also decreasing. It was especially noticeable in the second quarter of 2017. The strengthening of the exchange rate of Ukrainian hryvnia against the US dollar over the last couple of months and, apparently, media reports about the government’s plans not to raise gas prices for the population this autumn have played a key role in this process.

However, such trends might well indicate that the NBU is slowly but successfully moving along the difficult path of anchoring and stabilizing expectations given its monetary policy aimed at reducing inflation. A stable macroeconomic environment with low and predictable inflation rate remains the main objective of the NBU’s monetary policy, as well as the most important prerequisite for ensuring sustainable economic growth.