This money could be earmarked for social spending or investment instead of remaining in the pockets of business owners in the most developed industries. In June, the Government reported on meeting the state budget revenue plan. However, this is a result not only of an increase in tax revenues, but also of the lower planned targets (which we recently wrote about).

This publication was prepared by KSE Center of Public Finance and Governance, with the financial support of Sweden.

Apart from the economic crisis, there is at least one other reason for the shortfall in tax revenues, tax privileges. These are one of the most popular kinds of government support to Ukrainian businesses. However, from the point of view of society, providing tax benefits means that some taxpayers pay less in taxes than others. This means that either others pay extra for them, or the Ministry of Finance has less money for expenditure. This results in increased inequality among taxpayers and lower tax base (or the tax amounts that the Ministry could collect).

According to a study (in progress for publication) by Center of Public Finance and Governance, in 2019 alone, the privileges accounted for a revenue shortfall equivalent to USD 1.3 billion (3.4% of revenues). Over the five years (2015-2019), in total, the state budget lost USD 6.4 billion thanks to tax privileges.

Therefore, by supporting individual businesses, the Government in fact loses the amounts commensurate with the loans from international organizations. For comparison, under the last two agreements with the IMF, Ukraine received USD 3.48 billion from the Fund in 2018-2020, including USD 2.1 billion in June 2020.

At the same time, if the scope of tax privileges and hence budget losses from them decreased in 2015-2017, it began to grow again in 2018. And the approach demonstrated by Parliament during quarantine – distributing benefits to individual industries – provides reason to further expect an increased budgetary loss from tax privileges in 2020.

For almost the entire period of independent Ukraine, tax privileges were considered to be an integral part of governmental financial support to businesses. For instance, according to the State Tax Service, because of the benefits, the state budget came up UAH 37 billion or 15.4% (!) short in all revenues in 2010, and UAH 59.2 billion or 18.8% in 2011. During the years of Yanukovych’s presidency (2010-2013), the state budget failed to get UAH 180.5 billion in revenue. This money remained in the pockets of some taxpayers.

From the point of view of public finance, tax privileges are the “falling-out” budget revenues. That is, the revenues that the state could get and use to spend on, say, additional medical, educational, social services to citizens or infrastructure development. Tax privileges support large businesses in the first place. Because the larger a company that can count on those benefits, the larger the actual amount of funds retained by that company.

That is why, following the Revolution of Dignity and regime change, the Government and the Ministry of Finance set a course to curtail the numerous tax privileges. At the end of 2015, the last major sectoral privilege – a special tax regime for the agricultural sector – was abolished. This made it possible to significantly expand the tax base allowing the Government and Parliament to reduce the SSC from 43% to 22%. 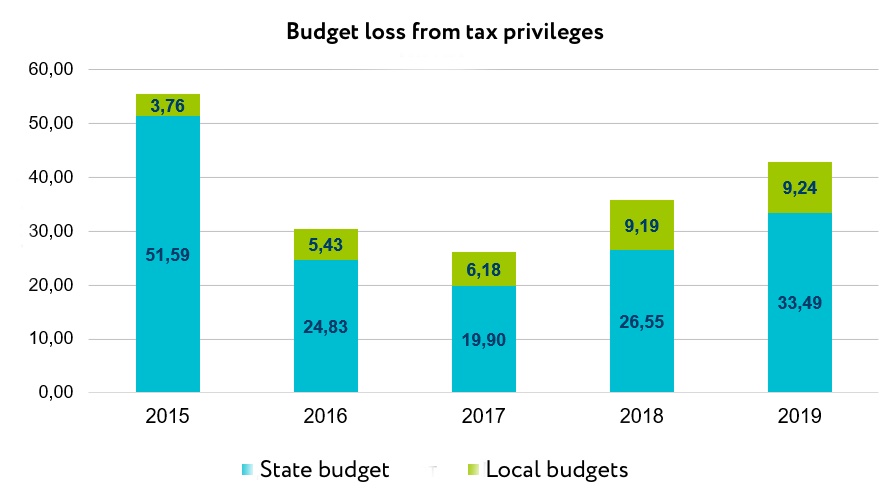 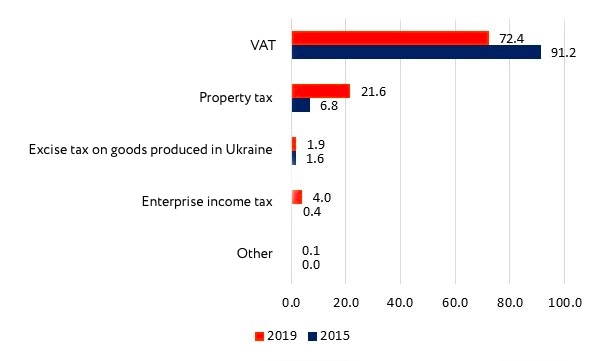 For a short period of time, the Government and Parliament managed to not provide tax privileges. Yet the trend turned around already in 2018. Over the last two years, the number of benefits provided and the loss from them to the state and local budgets began to grow again.

According to the State Tax Service, the state budget loss from the tax privileges increased from UAH 19.9 billion (2.5% of revenues) in 2017 to UAH 33.5 billion (3.4% of revenues) in 2019. Local budgets lost increasingly in the corresponding period, from UAH 6.2 billion to UAH 9.2 billion. We will analyze the structure and the local budgets’ loss dynamics thanks to tax privileges in future publications.

The largest amount of money retained by businesses thanks to tax privileges accrues to value added tax. In 2019, the benefits with regard to this tax in the amount of UAH 30.9 billion weighed on the country’s budget making up nearly 2% of all consolidated (state + local) budget revenues.

With the share of VAT in the total budget loss from the privileges decreasing, in absolute terms, the loss amount has been increasing since 2018. For instance, VAT accounted for 91.2% of consolidated budget loss from the tax benefits in 2015, with only 72.4% in 2019. However, in absolute terms, the amount of VAT benefits granted in 2019 is higher than in the previous three years.

Second is the property tax benefit. This tax goes to the local budgets, meaning the loss from this benefit is borne by them. In the last five years, this benefit has tripled in volume, from UAH 3.8 billion to UAH 9.2 billion.

Third is the income tax benefit (with a UAH 1.7 billion state budget shortfall in 2019). Over the five years, the amount of money remaining in the taxpayers’ hands thanks to this benefit has increased 3.5-fold. The key growth driver here is the introduction in 2017 of tax privileges for the aircraft industry and financial sphere.

The most important thing in providing tax privileges is who exactly and on what principles receives them. Since it is actually a question of hidden subsidies for certain business entities at the expense of the state budget.

The Ukrainian government does not have a policy for providing tax privileges. Neither the Government nor Parliament have a clear (or at least laid down on paper) understanding of what industries, with what purpose or for what terms can be eligible for tax privileges.

According to the Public Finance Management System Reform Strategy for 2017-2020, a number of tax privileges have been abolished in past years. However, no plans for the future have been declared. In the the Ministry of Finance’s new draft strategy until 2023 – “Self-sufficiency” – tax privileges are only mentioned in passing. In the section on tax incentives to encourage economic development, another benefit is planned to be introduced, tax exemption for the share of corporate profits spent on investment. And in 2021, another benefit is planned to stimulate asset replacement, namely deferred payment of VAT on imported production equipment that is not produced in Ukraine. However, no estimates exist as to why these kinds of benefits should be introduced and what problems of investors the Ministry of Finance is planning to solve with the help of such benefits.

Besides, Ukraine does not have a system for monitoring the impact of tax benefits on individual industries and the economy as a whole, which makes it impossible to assess the effect of the supportive measures.

The provision of tax privileges is thus chaotic and unsystematic. This has several implications.

(1) Tax privileges become an instrument of political bargaining, a “currency” in negotiations between the Government and Parliament on MPs’ support for bills of importance to the Government (e.g. the state budget).

Specifically, according to the State Tax Service (classified as budget revenue losses by the Directories of tax privileges), over the past five years, 75% of all benefits were approved at the end of the year (in November/December). This directly contradicts the requirements of the Tax Code, according to which changes to tax legislation have to be approved by Parliament no later than 6 months before their entry into force (i.e. no later than July 1 of the previous year for the privileges to take effect on January 1).

(2) Most privileges are received not by industries needing an impetus “at the start”, but by those that are already well developed (and therefore having powerful lobbying in Parliament).

Figure 3. Benefits by the industries being the largest beneficiaries, billion UAH 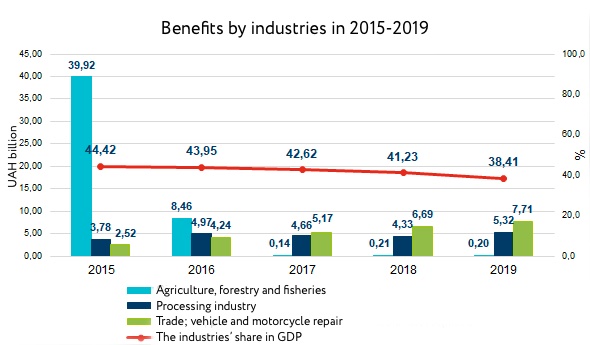 In 2015, these three industries accounted for 84% of all revenues retained by businesses thanks to tax privileges. 72% of the funds retained by the taxpayers as a result of tax benefits (i.e. UAH 40 billion out of UAH 55.4 billion) was accounted for agriculture. Another 7% (UAH 3.8 billion) – for the processing industry, with 5% for wholesale and retail trade (Fig. 5).

Figure 4. The share of the largest industries in GDP, % 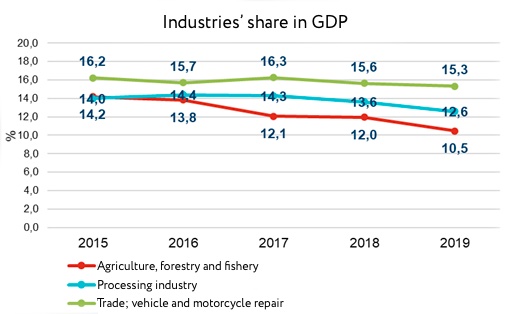 In 2019, the “weight” of tax benefits with regard to these industries halved, amounting to 37% of total benefits. Specifically, at the end of 2015, at the government’s insistence, a special long-term VAT regime for the agricultural sector was abolished. Due to this and following a short transition period in 2016, the amount of tax privileges for the agricultural sector decreased to UAH 0.2 billion. Yet at the same time, significant subsidies (UAH 1.5 billion in 2017) were provided to the agricultural sector as a partial (and more “targeted”) compensation mechanism for the “losses”. Despite the abolition of the privileges, the industry’s gross production volume increased by 50% from 2015 to 2019.

The other two industries remain among the biggest beneficiaries of tax privileges. For example, the scope of benefits for the processing industry increased almost 1.5-fold (from UAH 3.8 billion in 2015 to UAH 5.3 billion in 2019), while the benefits for trade and vehicle repair tripled (from UAH 2.5 billion to 7.7 billion). 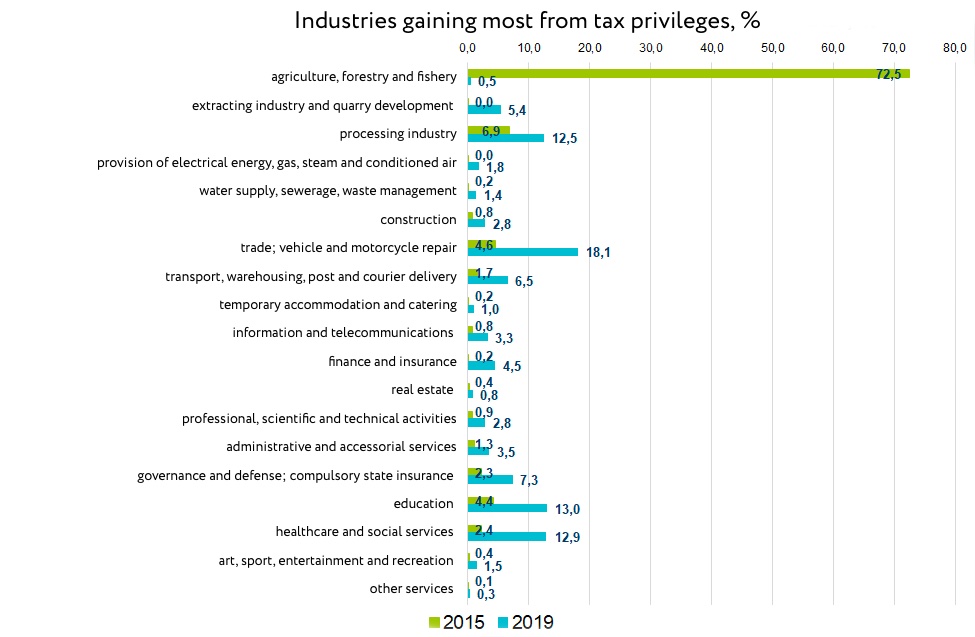 There have been some positive changes in the benefits structure. In recent years, there have been more tax incentives introduced for industries with an important social function. For instance, in 2019, UAH 11 billion or 26% of all tax benefits were received by business entities in education and medicine, accounting for only 6% (UAH 3.7 billion) of state support in the form of tax privileges in 2015.

(3) A considerable number of tax benefits are introduced by Parliament with no expiration date. In fact, tax privileges increase an industry’s competitiveness not due to the advantages they provide, but to dumping. And if the privileges are introduced on a temporary basis, with an expiration date, an industry can use this time to strengthen its own competitiveness. But if an industry has been receiving the benefits for a long time, the latter demotivate that industry’s enterprises to invest in development. Furthermore, this being the case, tax benefits create a “warm bath” effect for the businesses, reducing their competitiveness.

And even if the term of a tax privilege is defined in the law, with a lobby group in Parliament, the abolishing of such a privilege could be postponed (on a regular basis).

What to do with it?

The economy’s largest sectors remain the key beneficiaries of tax privileges. The amount of budget losses from the benefits reached a minimum in 2017, growing ever since.

Presently, the Government and Parliament do not have clearly articulated policies regarding tax privileges. Such policies should include the benefits’ purpose and rationale, as well as expected results (targets). The Government currently does not analyze the results achieved thanks to the benefits. Consequently, we do not have assessments of the effectiveness of the use of public funds.

Any business support initiatives should be carefully calculated, with the initiatives’ expected effect outweighing the expected costs (or revenue loss). Especially during the crisis, when the state’s financial resources are very limited.

It is best to support industries or enterprises not through privileges, but through direct subsidies from the state budget. Firstly, such support is much more transparent than privileges. Secondly, it makes it possible to provide assistance to small and medium-sized businesses rather than to large ones, as is the case with tax benefits. Finally, providing subsidies does not affect the interactions of economic entities (as, for instance, this becomes a problem for the counterparties of privileged companies in the case of VAT advantages). It is also important that subsidies are quantified, making it easy to say what losses the budget incurs, in contrast to the benefits.

If the Government still sees a need for tax privileges, we recommend that:

Only under these conditions can it be argued that tax benefits contribute to the development of the national economy and that they are not the result of a strong lobbying resource in the largest industries. 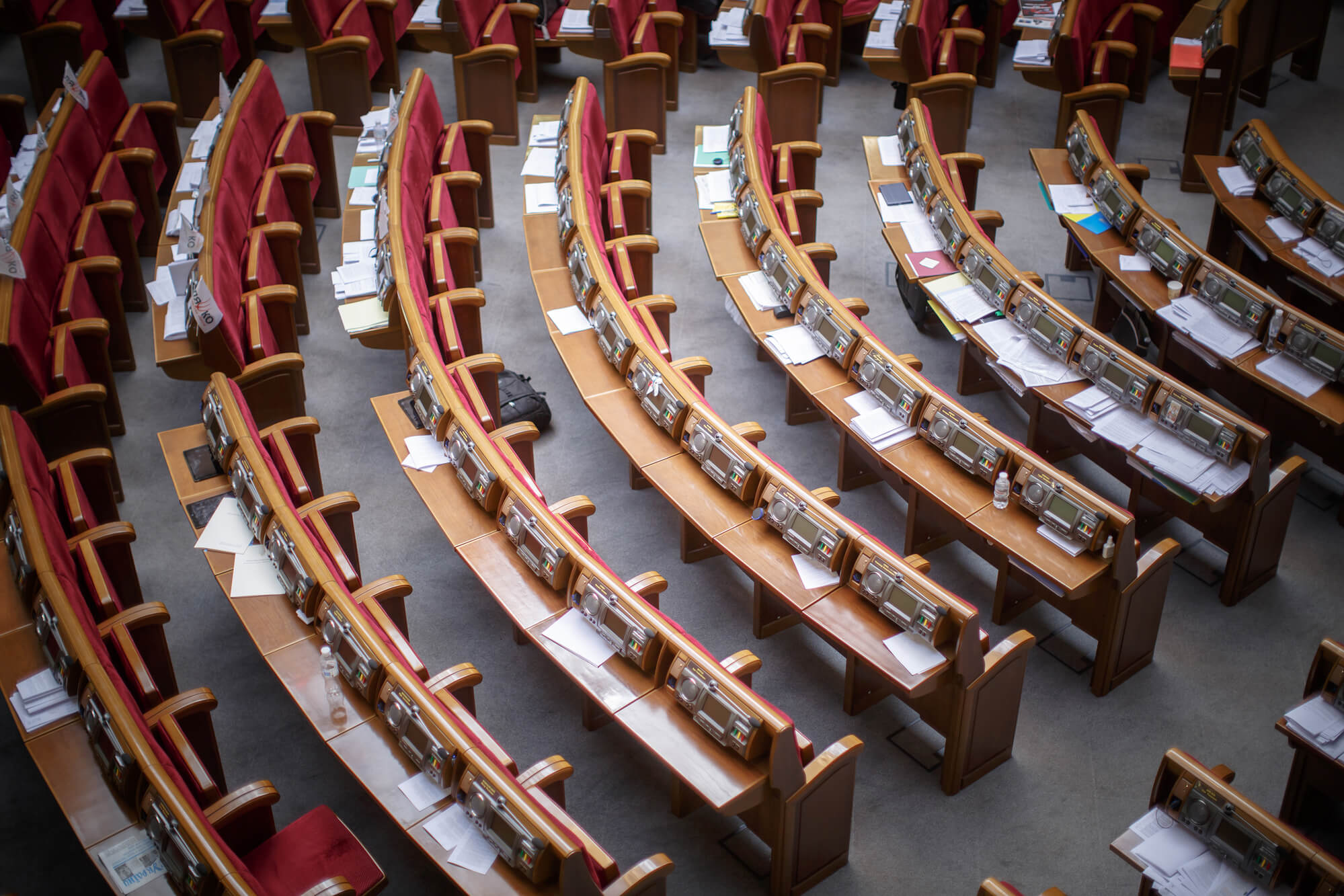 Kicking Off The Bottom. In The First Quarter Of 2021, The Government Remembered About Reforms