It’s not Putin, it's Russia

Putin personalizes Russia’s aggressive war in Ukraine. But the blood of innocent Ukrainians is also on the hands of millions of Russians who support Putin. Just like Germany went through denazification, Russia must repent for the war crimes committed in Ukraine and elsewhere.

When Russia occupied Crimea and parts of Donetsk and Luhansk oblasts in 2014, Putin’s approval rating soared (Figure 1). Russians were ready to withstand [very mild] sanctions applied onto them by the West in order to have their feeling of victory and greatness. In eight years, Russia has turned a blooming Ukrainian peninsula and vibrant cities into desolate places similar to Abkhazia or Transnistria (which Russia also ‘liberated’). If you’ve never been to those, you can compare the state of nature and infrastructure in Finland and Karelia (seized  by Russia in 1940), in Kuril Islands that belong to Japan and those occupied by Russia, or the territory of Kaliningrad (former Konigsberg) oblast and the surrounding countries to understand how Russia “developes” occupied territories. 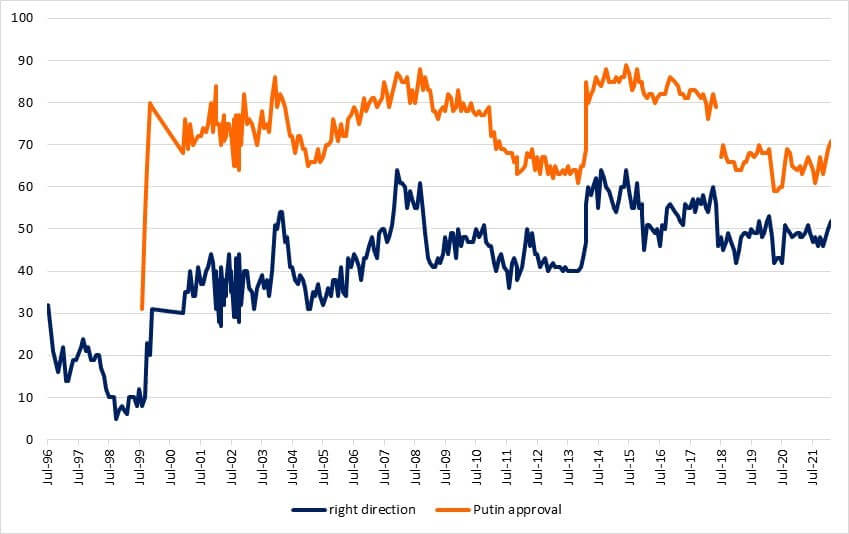 After Putin started a full-scale war on Ukraine on February 24th 2022, his approval ratings have risen again. Different polls provide slightly different numbers but on average about 70% of Russians support the Russian invasion of Ukraine. Looking at their social networks, one can see that with a few exceptions they are more worried about their inability to pay with a card or to buy a hamburger than by the fact that their country is killing Ukrainian children. Furthermore,  they believe that “Ukrainian nazis supported by NATO have drawn Russia into war, and we are protecting ourselves”. How this corresponds with the Russian army killing Ukrainians on Ukrainian soil remains unclear. But as Goebbels (minister of propaganda in Nazi Germany) said, the more blatant a lie is, the easier people will believe in it. Russian propaganda is very effective (figure 2). And partly this effectiveness is explained by the fact that it resonates with the “deeper” beliefs of Russian people. Until about a week ago they had access to all the Ukrainian or world media, many of which have a Russian version. But they chose to believe their TV or “opinion leaders”. The share of Russians who do not support the war is quite low, and the number of active protesters negligible compared to the population.

Figure 2. Attitude of Russians to different countries or groups of counties 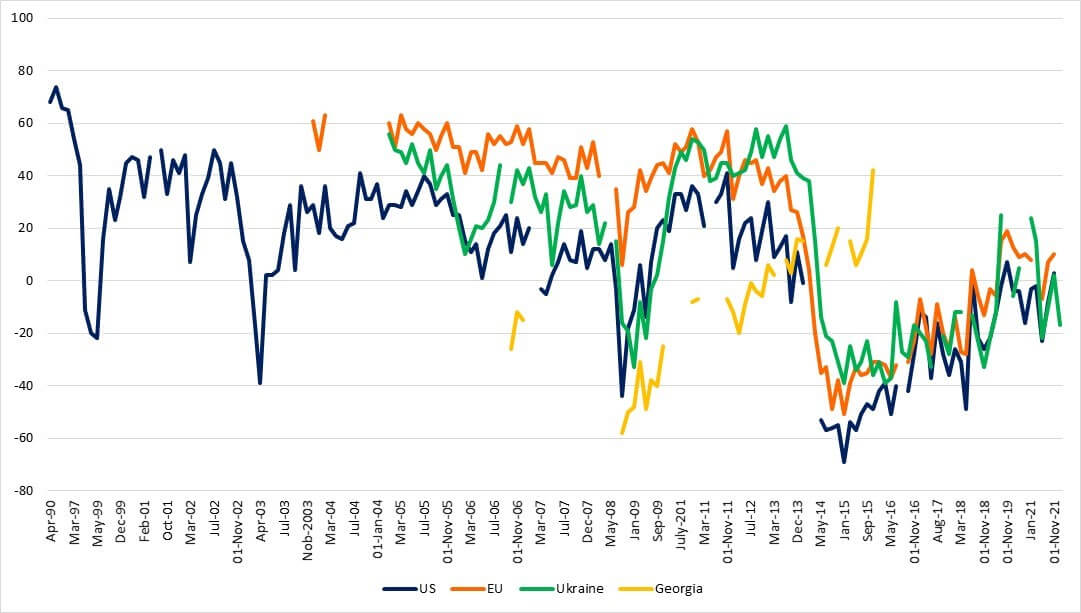 Data: Levada centre polling company. Note: the lines show the difference between percentages of those who feel positive about a certain country and those who feel negative. Thus, when the line is below zero, this means a mostly negative attitude. This figure shows that the attitude to the US, Georgia and Ukraine became highly negative in 2008, when Russia attacked Georgia, and the attitude to the US, EU and Ukraine became very negative in 2014 – when Russia attacked Ukraine. These changes clearly show the impact of propaganda.

Russian propaganda has cultivated hatred to Ukrainians and other nations for years. For example, in September 2004 I was in Crimea and watched a Russian TV channel – because others were absent. This was the time when terrorists took hostage about 400 children in a school in Beslan, and Putin ordered to blow this school up. Russian news showed the leader of a Ukrainian party saying “you cannot defeat people” with a commentary that this was his reaction to the events in Beslan. Indeed, he said this phrase – albeit in July 2004, and it was related to upcoming elections in Ukraine.

However, equating “Ukrainian nationalists” to fasist began much earlier – at least since World War II. This myth is related to the fight of the Ukrainian Insurgent Army against both Hitler and Stalin. It is true that at first some Ukrainians hoped that the German army would free them from the horrors of Bolshevism but very soon they realized their mistake. Yet, Soviet and then Russian propaganda has thoroughly painted Ukrainians as Nazi collaborants, although about one million of Russians fought in the rows of Wermacht or SS compared to a few thousand of Ukrainians. Another pillar of Russian propaganda is the idea of Moscow as the Third (and last) Rome dated from the 1510s – the superiority of Russians over all other nations, its messianic mission. This narrative in its different versions is immanent to Russians and was imposed on other nations of the Russian Empire/USSR by multiple instruments – forced Russification, implicit or explicit discrimination (for example, national quotas for university admission), suppression of national languages and cultures while explicitely stating that Russian literature and culture were superior to all others, repressions against or appropriation of intellectual elites etc.

Russia continues to produce blatant lies not only for their own people. It is not ashamed to proclaim these lies at the highest international forums. Thus, Russian representative in the UN Security Council told to the whole world that Russia was “protecting Donbas people from Ukrainian Nazis” and that “Russian army did not kill civilians”. At the meeting with Ukrainian foreign minister on March 10th, Russian foreign minister was lying that the maternity home in Mariupol that Russians bombed on March 9th was in fact a military base of nationalists, and that photos of women and babies “did not take into account the opposite opinion”. As the ministers were negotiating, Russian army continued to shell missiles and bombs on residential areas killing dozens of people.

The full-scale war today became possible partly because for the last eight years Western countries were asking alongside Russian propaganda “What can Ukraine do to end the war?” (to be fair, some Ukrainian politicians were asking the same question).

The answer that Russia expects is “to cease existence and become a part of Russia”. However, the right answer to this question is – to win over Russia. And 92% of Ukrainians believe that we will – because not only our army is fighting, the whole country is fighting. Now the question is the price of the victory. I think it is clear by now that it’s not about Ukraine. It’s about the security of the whole world. So by helping Ukraine to win, other countries are helping themselves. Standing with Ukraine now is equivalent to sharing our victory over Russia.

First, don’t hope for a coup in Russia. For one thing, it is highly unlikely. For the second part, if Putin is replaced by someone who is more competent and less corrupt, the world would be in even greater danger.

Second, don’t hope for a popular uprising in Russia. As explained above, Russians support the war by the vast majority. A poll published recently by the Navalny Foundation showing that Russians are starting to understand that Russia is the aggressor, is not representative because it was performed via the Internet and only in Moscow. In reality we see just a few thousand of 15 million Moscow residents protesting against the war. During the Revolution of Dignity, over a million people came to the Maidan square while Kyiv has about 4.5 million dwellers. Moreover, even among the “more progressive” people surveyed by Navalny, only 36% believe that Russia is to blame for the war.

Now is the unique time for the civilized world to show that it can stand up for its values and to defeat the state that has been using Western institutions to undermine these values. Don’t ask what concessions Ukraine can make for a ceasefire. You’ve done this for too long. Don’t offer any face-saving for Putin. You’ve done this hundreds of times already. Don’t feel sorry for Russian babushkas – as they don’t feel sorry for Ukrainian children.

For the free world to win, Russia has to be defeated. Everyone there has to bear the responsibility. Everyone has to undergo denazification in the same way as Germans did after WWII. No one who worked for the Russian state or benefited from it should be allowed to enjoy their lives in the democratic countries (we explained how to achieve this here, and how to structure the sanctions here and here. We also explained that fears of escalation due to imposing a no-fly zone above Ukraine are unjustified and that an already adopted UN resolution is a sufficient legal ground for this).

It’s now or never. The Ukrainian army and people have proven that Russia is strong only when it fights unarmed women and babies. The West should decide whether it would allow it to continue doing this or whether it will practice humanism instead of just proclaiming it.