Men's and women's attitudes towards war

Men’s and women’s attitudes towards war

Several days ago VoxUkraine published the material about how Ukrainians feel after the first month of the war, whether they changed theirs habits and what they expect from the future.

We want to see in this article what kind of difference is between men’s and women’s life experience during the war and plans for the future.

The material is written on the basis of the data poll YOUkrayina , which was held by the sociological company Factum Group on March 15 – 22, 2022. Target audience of the poll: the population of Ukraine aged 18 – 55 , Internet users in cities with a population of 50+ thousand (excluding Crimea and ORDLO).

Change of the place of residence

Russia started full-scale war against Ukraine on the morning of February 24. On the same day, the Verkhovna Rada of Ukraine approved the Presidential Decree on the implementation of the martial law in Ukraine. The implementation of the martial law limited travelling abroad of men aged 18 to 60 years. But data shows that men also less than women changed their whereabouts within their regions. In total, 81% of men and 67% of women from cities with population more than 50 thousand people have not changed their places of residence after the beginning of the war. 11% of women and 3% of men went abroad.

Figure 1. Location as of the time of the survey 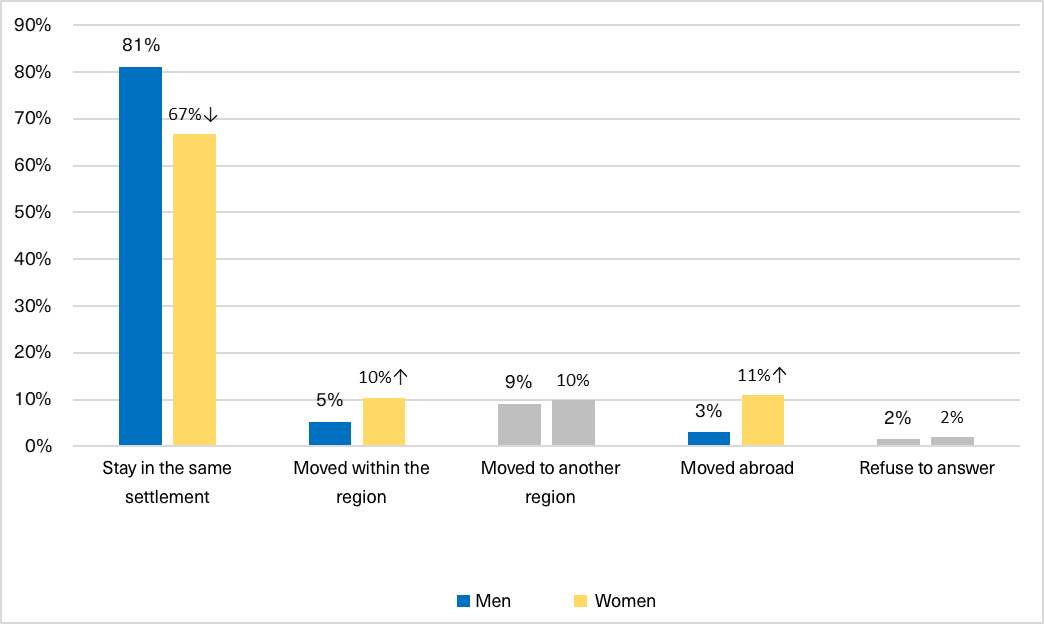 Participation in the war against the Russian Federation

Both women and men take active participation in the counteraction to the Russian occupiers. More than 80% of respondents noted that they are in some way involved in countering the enemy: it is assistance with resources to Ukrainian defenders and citizens, volunteering, as well as participation in information war. The only point in which involvement of men and women has statistical difference is the fight with weapons against the enemy (11% of men and 1% of women are involved in the armed resistance). This is not surprising, because historically, until 2021, only women with certain professions (medicine, telecommunications, cartography, etc.) had to be in the military register,

therefore the majority of women in Ukraine do not have military experience. In 2021 the list of relevant professions was much more expanded, but in 2022 diminished again — up to 14 specialties.

Figure 2. Forms of the participation in the war against Russia 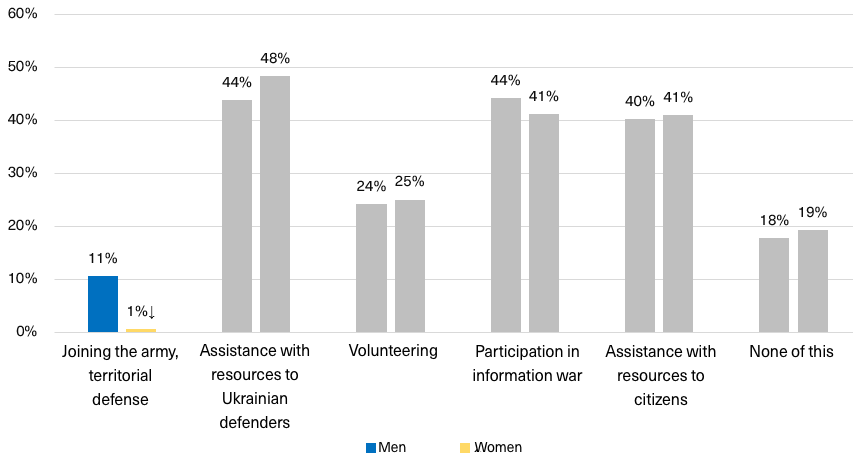 Figure 3. How people support relatives, friends, colleagues during the war 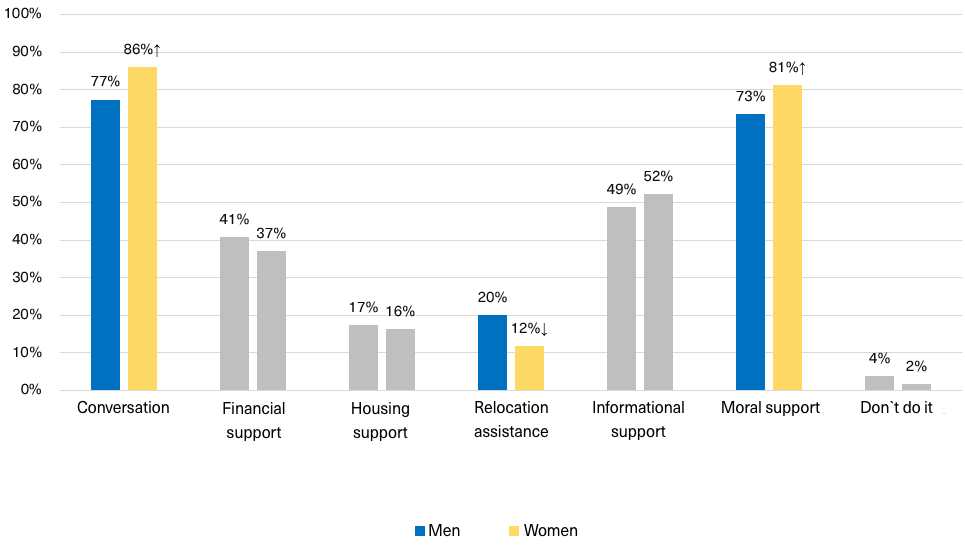 Women suffer from crises more often. Such trend was observed during a coronavirus pandemic. According to the McKinsey Global Institute, in April 2020, 54% of dismissed people were women, though their share in the working forces was 39% in total. In wartime, lower involvement of women in work is also observed. Among respondents 69% of men and 56% of women have a job (in October 2021 it was 81% of men and 64% of women).

77% of women and 62% of men report that now their involvement in work decreased (we are talking about both firing and reduction of the working time while saving working places), 13% of men and 3% of women have reported that their work intensity is increased. 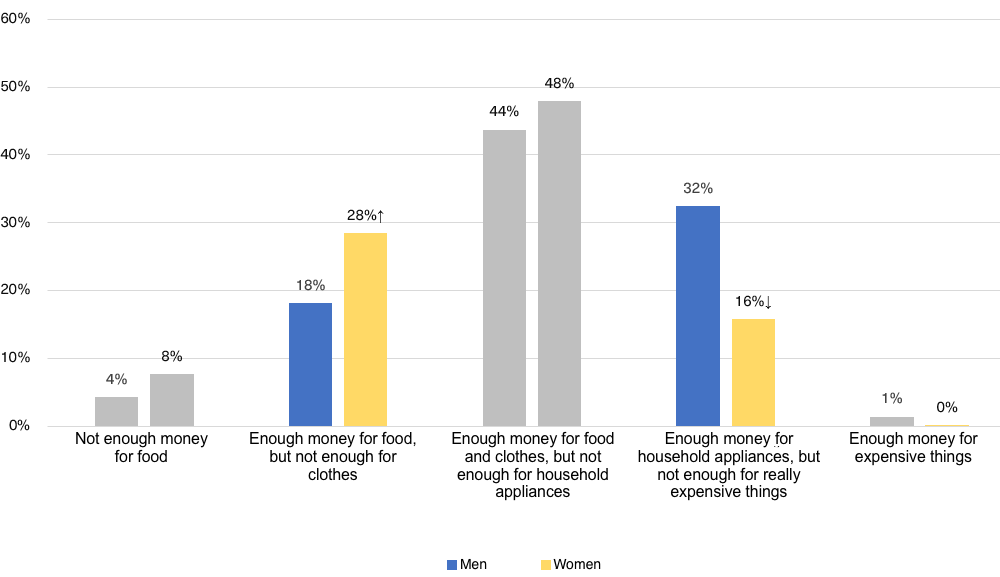 Figure 5. Change of involvement in these activities compared to pre-war time 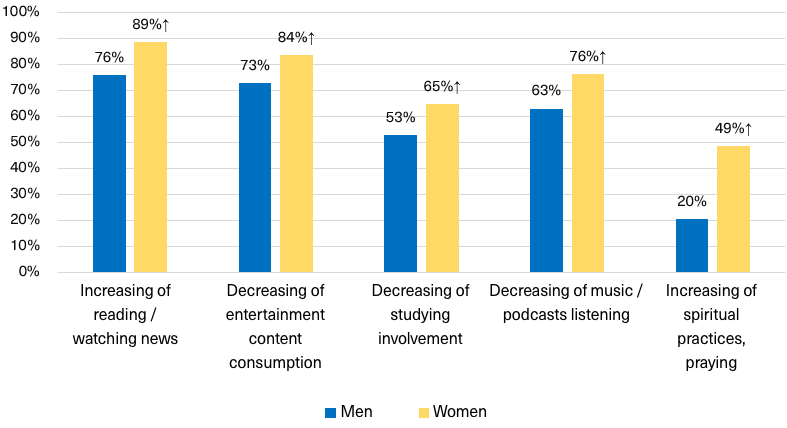 If we compare activities that help Ukrainians to support mental health during the war, the men prefer those not related to the war (work, listening to the music), while women — those that allow to reflect on situation through conversation or prayers.

Figure 6. What activities help to support mood, draw strength for life during the war

British psychologist Lucy Beresford notes that during large external upheavals it is quite normal to feel self-doubt and helplessness. Probably, women feel stronger psychological pressure and insecurity because of the higher level of immersion in the news of the war and communication with loved ones. Answering the question “How would you describe what you are experiencing at the moment” 13% of women and 4% of men replied that they were confused, afraid and stressed. The opposite answer “self-confident — I have everything under control” chose the mirror share of respondents — 13% of men and 4% of women (all others chose intermediate options). Answering the question “Which of the following do you lack?…” giving replies that have statistically significant difference, women feel bigger lack of health, money, knowledge, determination (Fig. 7).

Figure 7. The answer to the question ” Which of the following do you lack ?…” 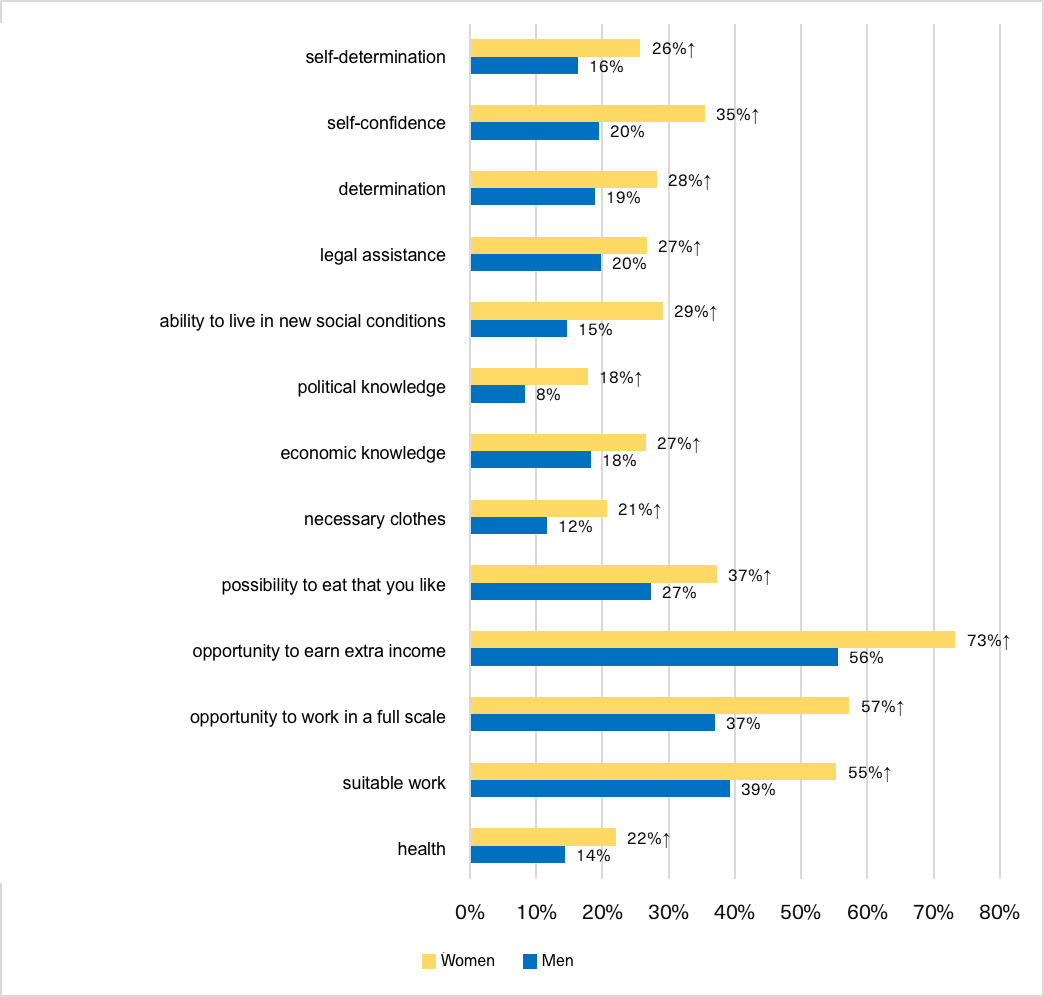 Plans for the future

Women better know, what they will do already after the finish of war. Only 6% of women and 12% of men do not have such plans. First of all, they are going to meet relatives — 23% of women against 14% of men, return home — 17% of women against 5% of men (the difference in this answer is more likely related to the fact that the higher share of women left their homes) — and hug — 8% of women and 2% of men. At the same time the fraction men predominates in the answers “get drunk” — 9% of men and 1% of women chose this point — and “I will get married” — 3% of men and 0.3% of women are going to do it right away after the finish of war.

Figure 8. Answer to the question “What will you do at the first place after the end of war?” 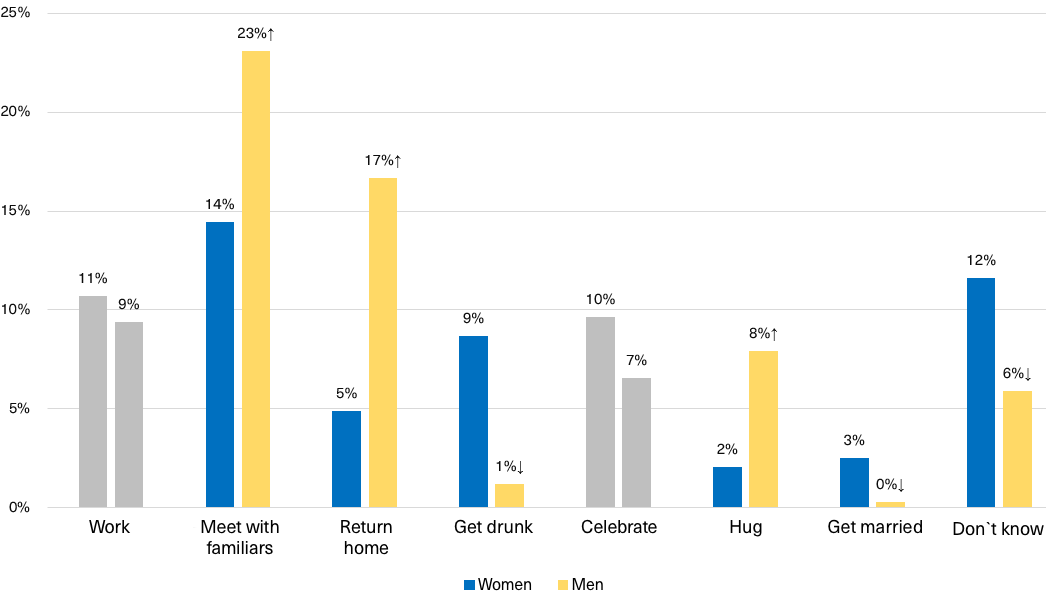 War affected life of women more than life of men. The bigger part of them were forced to quit job, give up the opportunity of additional earnings and change place of residence in order to take care of the safety and moral state of relatives and children. It affected their well-being significantly and increased self-distrust. So it is necessary to plan now not only the restoration of the infrastructure and economy of the country, but also effective measures aimed at the social and psychological support of Ukrainians.