Last year VoxUkraine analyzed how the President, Parliament, Cabinet of Ministers and National Bank changed the Ukrainian field of reforms over the past 3.5 years. In the first half of 2018, reform-making in Ukraine slowed down significantly. Have the ministries become more active in the second semester? What impact did it have on the general law-making activities in 2018?

In this piece you will learn how reform-making activities of the Parliament, Administration of the President, Government and the National Bank changed in the course of the year; which ministries initiated more progressive changes and which anti-reform was among legislative anti-achievements 2018. 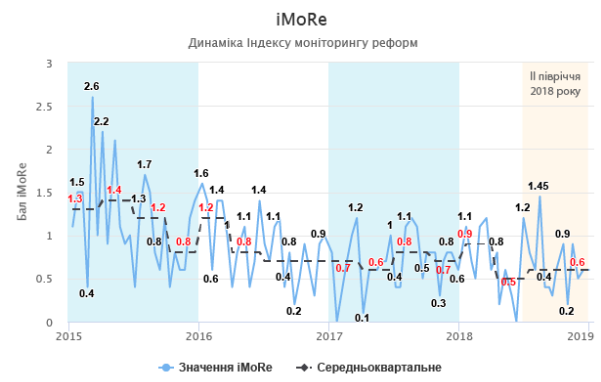 Reform pace continues to drop. From 1.3 points in 2015 the index dropped to 0.6 points in 2018 (based on -5 to +5 scale, where the negative value means regress). This value removes the pace of Ukrainian reforms even farther away from the desired. The acceptable index according to iMoRe experts is +2.0 points and higher. The closest we were to this standard was the second quarter of 2015, when the index was +1.4 points.

The first half of 2018 showed a rather pessimistic picture of Ukrainian reform development (41 reforms). The second half of the year brought more positive legislative changes to the Ukrainian society – 69. Similarly to 2015, when 138 reforms were passed in the first semester and 187 in the second, the government was trying to “catch up” with the plans made at the beginning of the year before the New Year.

In the second semester of 2018, much attention was paid to the development of banking sector due to active involvement of the NBU and business environment regulation in Ukraine done by the Parliament and separate ministries. If compared to the first half of the year, priority areas still included social welfare, state expenditure efficiency and ownership.

In order to view the list of reforms that helped progress in one of the reform areas, point to the chart.

What has been done in the course of the year

The year 2018 was the anti-record year in terms of reforms since the start of iMoRe. All in all, 110 legislative acts were passed in 2018 which change the laws for the Ukrainian economic environment. Total index of all the acts is +136.9 iMoRe points.  If we look back at 2015, the number of reforms was 325 and total index was 536 points.

The highest number of reformative laws and decrees have been put out by the Cabinet of Ministers of Ukraine – 51 reforms. It is almost half of all the reforms in 2018 (46%). Up next in the rating are the Parliament (25%) and the NBU (24%). Yet, if we look at the “weight” (iMoRe index) of the reforms made, it was the Parliament that got the most points. On average, one parliamentary law “weighs” 1.6 iMoRe points while for the Cabinet of Ministers the value is only 0.8 points.  Presidential legislation should be mentioned as a separate case. Though the President initiated fewer laws than the Parliament or the Cabinet of Ministers, they are often assessed much higher by the experts. In 2018, the President initiated only four progressive legislative changes. In particular, it refers to the two laws On Anti-Corruption Court, (+3 and +2 iMoRe points respectively), the Law On Currency (+5) and framework Law On National Security of Ukraine (+5).

No less important were the laws passed due to activities of people’s deputies. Among the most important parliamentary reforms are the Law On Reformation of Supervisory Boards of State-Owned Banks (+4) and the Law On Emitters of Securities (+3). The Parliament also did a lot in business environment regulation (total index of the Parliament in this area is +18.5 iMoRe points). In particular, it refers to the “customs single-window-system” law (+2) and the Law on Corporate Agreements (+2).

The NBU and its decrees also deserve a mention. Experts gave high evaluation to the NBU decree which allows bank clients to open accounts remotely using BankID system (+2.25). The following initiatives got +2 points each – introduction of a new instrument for bank capitalization; expansion of the list of banking data that should be disclosed; Methodological Recommendations for Organization of Corporate Management in Banks and establishment of the requirements for ensuring stability of banks.

Government agencies were also among the initiators of progressive change in 2018. Thus, State Property Fund drafted a Law On Privatization (+3). National Agency for Civil Service was responsible for the draft order on typical tasks and key performance indicators of heads of central government bodies (+1).

The work of Ministries in 2018

51 Cabinet of Ministers reforms had the following formal initiators: 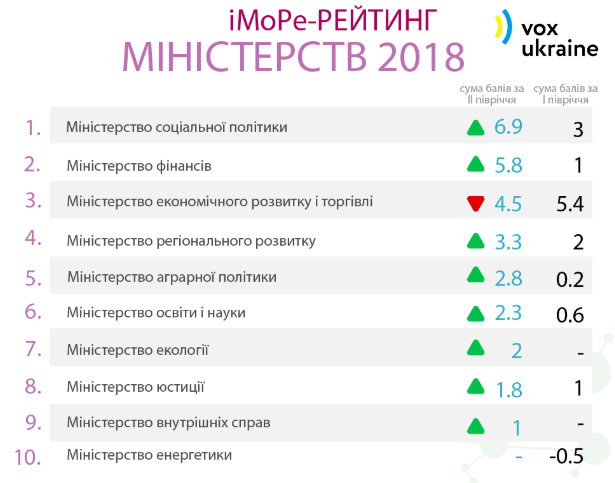 In the second part of 2018, the Ministry of Economic Development and Trade yielded its first place to the Ministry of Social Policy, which strengthened its positions in the rating due to a big number of decrees (11) in social welfare and labour market. Among such decrees it is worth mentioning regulation of benefits and subsidies allocation for payment of house maintenance services (+1), amendments to the procedure of allocating subsidies (+1), calculation of employment record for individual entrepreneurs (+1) and regulated procedure of employment abroad  (+1).

In spite of lost leadership positions in the rating, the Ministry of Economic Development still distinguished itself with the most “valuable” reform among all the ministries – Law On Enhancement of Copyright Protection which the experts graded at 2 points. In addition, an important novelty in the sphere of corporate management was introduced – new procedure for the selection of managers and supervisory boards of top state-owned companies (+1,8).

The work of Ministry of Finances was also highly evaluated. +5.8 points for amendments to the Procedure of Financial Reporting (+1), fiscal risk management (+1), approval of the Procedure of Use of Funds to Support Research Development (+1) and others. Contradictory marks were given to amendments to Tax and Budget codes from the “budget package 2019” (0 and +0.5 points respectively) because they created additional barriers in real estate information exchange as well as subsidized support of agrarian companies.

Among the Cabinet of Ministers decisions 2018, there is an anti-reform — from the Ministry of Energy. In May 2018, the Cabinet of Ministers passed a Decree on the List of Services of General Economic Interest (services that satisfy the most basic, general needs of citizens and are provided with the support from state and without interference of the Anti-Monopoly Committee.) Experts appreciated that the list was created and formalized within a single document. Yet, some services, which made it to the list, may be provided on commercial basis and do not need state support.

You can view the list of all anti-reforms over the 4 years here.

4-year run of the Ukrainian reforms

Looking back, we see a long history of establishing new rules for the Ukrainian economic and political field. Between early 2015 and late 2018, Cabinet officials brought 789 reforms to Ukrainians with a total iMoRe index of +1143 points. In general, such a number of legislative acts capable of changing the political and economic situation in the country is impressive. Yet, we should not forget about the quality and implementation of these political decisions.

The directions of legislative activities of government officials are also changing. The most drastic drop may be observed in state management – from 110 laws and decrees in 2015 to only 18 in 2018. Instead, the work of government in such areas as “monetary system”, “state finances” and “business environment” is almost stable (with a slight drop since 2015).  Reforms in energy sphere, of which we had 56 for the whole period, are in most cases overlooked by initiators of change.

*Total iMoRe index is a sum total of all points given to legislative acts.

Rating 2018 shows that the number of reforms in Ukraine is slowly but decreasing. Previously active Cabinet of Ministers is now not producing the critical mass of progressive changes which we observed in 2015. In the past year, the iMoRe index remained steadily low.

The year 2015 was the time of increased attention from the international community to the Ukrainian politics and economy. Crisis conditions, increased need of financial support from the international partners and the necessity of close cooperation with the IMF, the EU and the World Bank made Ukrainian government officials speed up the process of adopting vital laws and decrees.

The situation is not too critical, thus some initiators may be lacking initiative to try and speed up the reform pace constantly. The year 2019 with the double elections and change in the political game bears the risk of slower implementation of the initiatives already approved.

How we calculated the rating

Methodological limitations of the rating:

Some laws are drafted by the National Bank. This institution has no right of legislative initiative. Thus, the laws drafted by the National Bank may be initiated by the President or deputies. It also sometimes happens that a ministry drafts a law which is later submitted to the Parliament by the people’s deputies. In this case, the rating is calculated on formal grounds – we consider that the initiator of law is the institution which formally submitted the draft law to Verkhovna Rada.

iMoRe is a rating which shows the contribution of government bodies into economy-related reforms but it cannot be viewed as comprehensive assessment of government activities, the activities of a separate ministry, the President or Parliament. We also intentionally did not calculate the rating for each Cabinet of Ministers composition as the process of legislative changes and their approval may take months and very often initiatives prepared by one team become a law or resolution when the ministry already has a new minister in charge.