Over the past decades, with the development of the banking systems, the ways that banks compete has changed dramatically. Nowadays, banks compete not only through price but also through geographic presence. That is, banks diversify their branches in different markets to raise the awareness of customers about the banks and services. As the number of geographically diversified banks has increased, the number of markets in which banks coincide has also increased. Besides the matter of market shares, the number of overlapped markets also matters.

Why does this matter? Consider this following scenario: Banks 1 and 2 have branches in 3 regions – A, B and C. Bank 3 has branches in regions A and B while Bank 4 has branches in region C only (Figure 1). Each region is considered as one market. Here come two questions. First, whether customers in regions A and B travel to region C to use the services of Bank 4. Second, whether competitive strategy of Bank 1 towards Bank 2 is similar to the ones towards Banks 3 and 4. 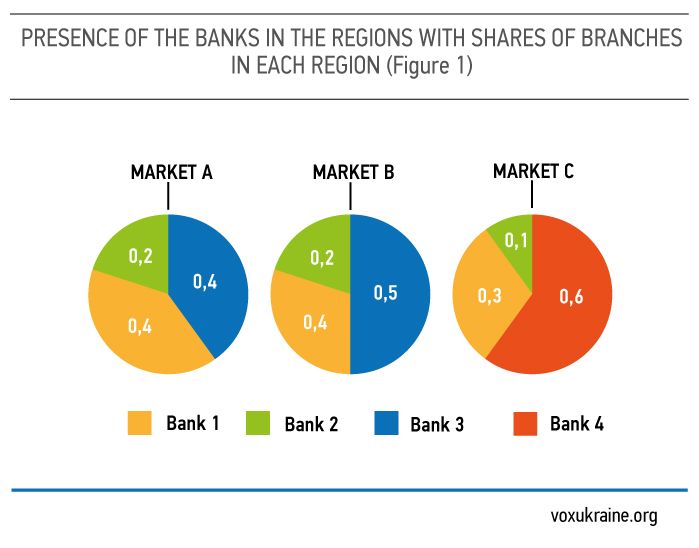 It is argued that repeated competition might increase the intensity of competition in the market, thus reduce firm profitability (e.g., Mester, 1992). The alternative view suggests that multimarket competition could induce the mutual forbearance among firms. The reason is, if a firm competes aggressively in a market, its multimarket rivals might act the same in other markets. Hence, they would mutually forbear with others instead of aggressively competing (e.g., Spagnolo, 1999).

In a recent study, Pham et al. (2016) provide new evidence for the relationship between repeated competition and bank profitability by employing the quarterly financial data of all Ukrainian banks from 2009Q1 to 2015Q4 as well as a rich and unique dataset about branch location of bank branches. The study provides three major contributions to the existing literature.

Second, we use multimarket contact as an indicator of multimarket competition. Specifically, three multimarket linkage indices are constructed by applying different weighting factors to control for the change in competitive attitude of a bank towards its rivals, based on the importance of the rivals. Detailed calculations and examples are provided in the Appendix.

Third, the current conflict between Ukraine and Russia has a negative impact on the whole economy in general and on the banking system in particular. Thus, we take a further step by investigating how the relationship between multimarket competition and profitability reacted to this exogenous shock.

To investigate the role of repeated competition on profitability, the authors first look at the interaction between returns on assets and multimarket contacts at regional level and city levels. We include in our analysis time dummies to control for the macro-level shocks.

Positive and significant coefficients are found for multimarket contact weighted by the size similarity and the coincided market ratio. This suggests the anti-competitive effect of repeated competition. That is, repeated competition allows banks to collect more relevant information about the rivals, which, in turn, raises awareness about the competitive retaliation. Consequently, multipoint market banks would avoid aggressive competition and have cooperative behavior instead.

These results suggest that banks will pay more attention to the size-similar competitors as they have common interests and setups, such as targeted customers or services provided. This induces mutual forbearance among the size-similar multimarket rivals. Moreover, more geographic overlaps increase the familiarity between banks that makes multimarket competitors more salient. As a result, banks are likely to avoid aggressive competition with those rivals. On the contrary, as small banks do not have strong competitive positions, the bigger banks do not have incentives to mutual forbear with them. 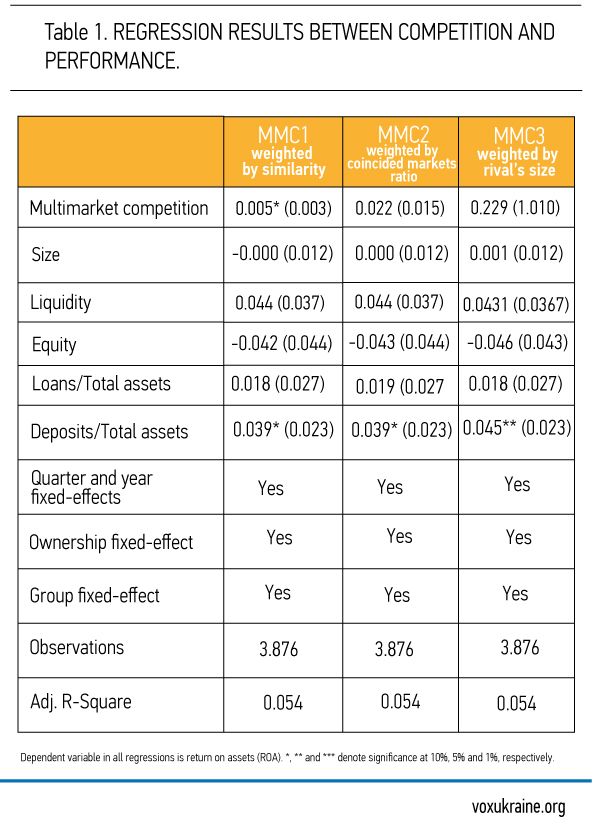 In order to identify the relationship between multimarket competition and profitability in the presence of the military conflict, we introduce the interaction term between multimarket competition and share of branches in affected regions in our regression. Since the conflict affects not only the occupied territory but also other regions, the competitiveness of the whole system is reduced with the significant decrease in the number of banks and branches. This, in turn, lessens the competitiveness of the markets. 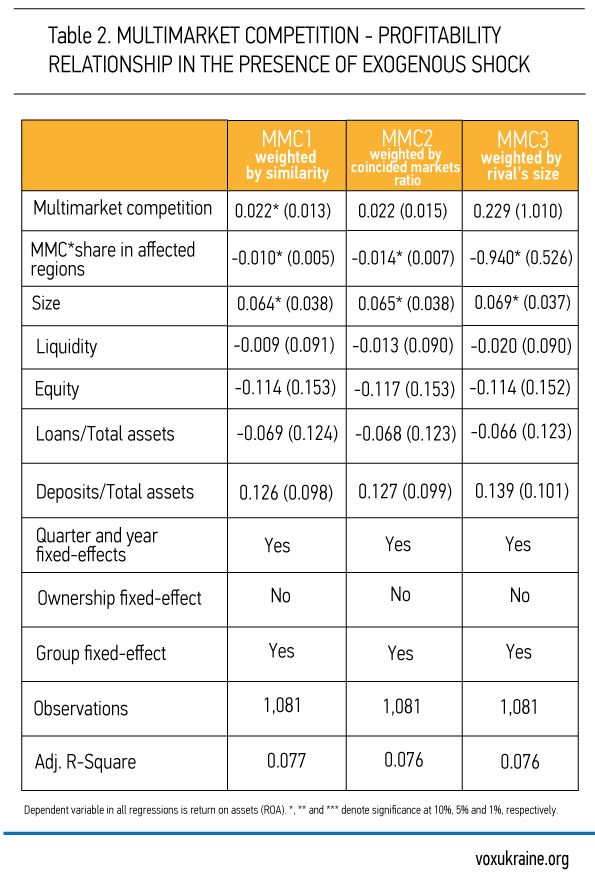 The findings can provide several policy implications. First, consolidation of small and medium banks should be promoted. Thus, consolidated banks can improve their competitiveness and gain benefits from anti-competition effect of multimarket contacts. Second, given the importance of bank branches and the development of new technologies, banks should develop a mixture of online and offline services. On one hand, banks can provide customers with digital services such as internet banking or mobile banking. On the other hand, branch networks should be enhanced to be more flexible and to accommodate the use of online services.

[1] Market share is the ratio of number of branches of a bank in one market over total branches of all banks in that market.