We find that both tariffs and non-tariff trade barriers lower productivity of food producing firms. The effect is significant for firms that import intermediate inputs. Thus we argue that output control and certification of production processes are better instruments for ensuring safety of food products than tariff and non-tariff barriers.

Growing public concerns about health and food safety have stimulated governments around the world to regulate food products using sanitary and phytosanitary (SPS) measures, product licensing and certification, and technical barriers to trade (TBT). Some food producers are concerned that such non-tariff measures (NTM) are another tool of protectionism used by governments, curbing product variety and making goods more expensive. But larger companies, with advanced technologies and years of experience in exporting food products, may find these measures a blessing in disguise protecting them from competition in the global markets.

NTMs have always been an essential part of the trade policy toolbox. However, because of substantial multilateral tariff reductions, in the modern world they have replaced tariffs as the primary trade policy tools (Goldberg and Pavcnik, 2016). While addressing public concerns, NTMs may lower productivity by restricting intermediate inputs, equipment, and technologies available for food producers, especially in developing and emerging markets. NTMs impact firms through several channels.

Similar to tariffs, NTMs make importing of goods more expensive by increasing trade costs. These include the costs of compliance with the regulations at the production stage, the costs of monitoring and verification, and the costs of the border inspections. The mechanism of the productivity decline works through the backward or forward linkages in the supply chain.

NTMs on inputs (backward linkages) reduce input variety (Ethier, 1982) and limit the availability of certain ingredients or technologies, which leads to a sub-optimal mix of inputs. In the downstream industries (forward linkages), the elimination of NTMs would increase competition, lead to a more efficient allocation of resources due to the expansion of more productive firms, a reduction in operational slack, and X-efficiency gains.

NTMs may ban certain technologies and ingredients, such as chlorinated chickens, use of antibiotics in meat, and products that contain genetically modified organisms (GMOs). In this way, NTMs are similar to import quotas and import prohibitions. Importantly, these measures not only influence the cost of production, but, by setting requirements for the quality and safety of the final goods, may boost consumer demand.

In Shepotylo et al. (2022), we investigate whether local NTMs lower productivity of domestic firms in the food processing industry in Ukraine. We identify a causal impact of NTMs on productivity by looking at the 2007-2013 episode of NTM liberalization following Ukraine’s WTO accession, which captures the period of very important changes in the approach to the production process and product quality regulations. This period embraces the results of almost two decades of reform efforts aimed at replacing the old Soviet system of mandatory standards (GOSTs) with the WTO- and EU-compatible system of product safety controls. We focus on five types of controls:

Our source of NTM data is Ukrainian legal texts, which directly record NTMs at the 10-digit classification of products. These measures are applied to imported goods by the customs border control system. We combine the NTM data with very detailed, product-level data for the Ukrainian food producers. We incorporate recent advances in production function estimation, separating demand shocks from productivity improvements, because we observe both prices and quantities of outputs. Using an approach similar to De Loecker et al. (2016), we compute and contrast productivity measures for revenue- and quantity-based production function. In addition, we deal with the issue of single-product vs multi-product firms by estimating the production function for single-product firms only and comparing our findings with the one where we use all firms in estimating production function. 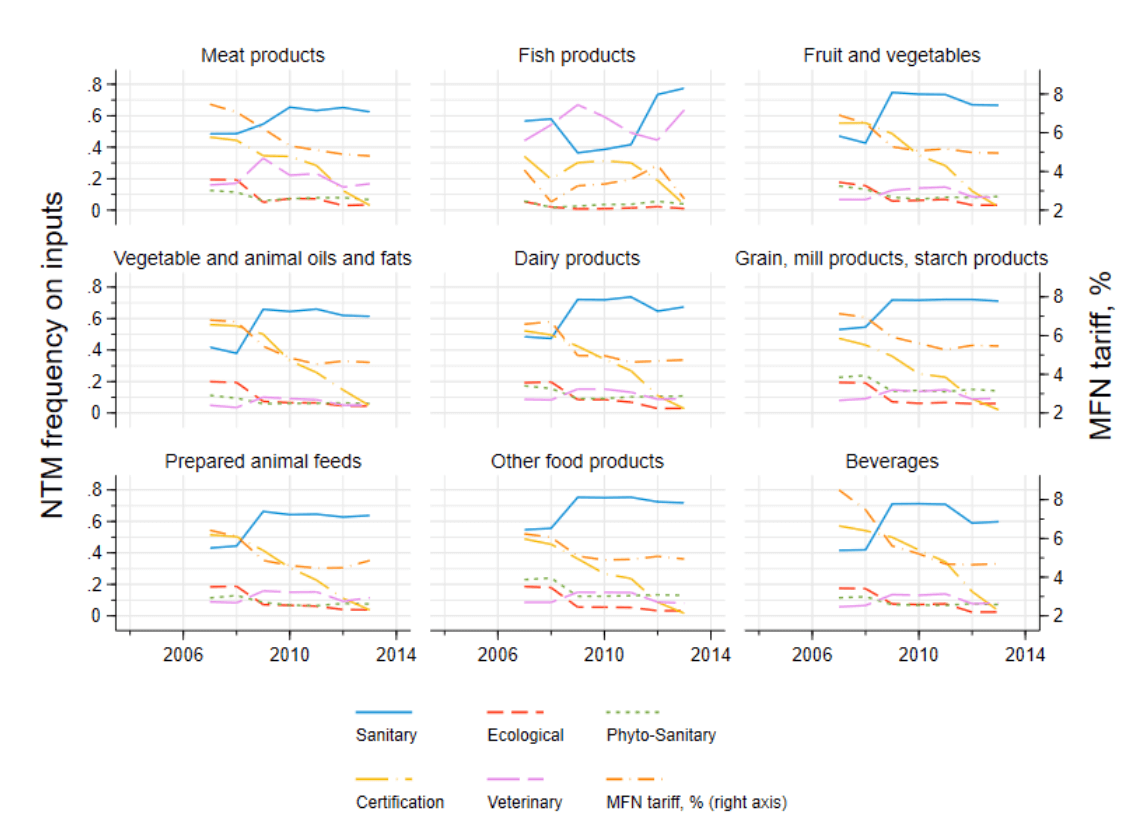 Figure 1 illustrates the frequency index (share of products impacted by an NTM in the total number of products) of Ukraine’s NTMs in 2007-2013. It clearly highlights one of the key problems of the old system: the excessive duplication of controls, thereby amplifying the control functions of the state agencies. In 2007, most of the food industry’s sub-sectors faced duplication of controls, whereas by 2013 the controls had been streamlined and duplication reduced. In particular, in line with Ukraine’s WTO commitments, the mandatory certification of food products was gradually eliminated, while the task of ensuring food safety was placed under sanitary and, if relevant, veterinary controls.

This change was especially pertinent to beverages, dairy and fish products, fruits and vegetables, and oils and fats. Other types of control were also streamlined, with the most visible change being experienced by the prepared animal feed sector, where only veterinary control remained. These changes allowed a reduction in the total number of NTMs that applied to Ukraine’s food sector. However, the duplication of controls was not completely removed. For example, many animal origin products (meat, fish, dairy) are subject to both veterinary and sanitary controls, while for grain, mill, and starch products, sanitary and phytosanitary controls are only partially duplicated.

Table 1 presents the main results. Column (1) reports a negative and significant effect of input NTMs on productivity. A one percent increase in input NTM is associated with 1.2 percent lower TFP. We expect that input NTMs influence the productivity of importing firms more than they affect the productivity of non-importing firms. Adding an import control variable and an interaction of importing with input NTM in column (2) confirms this conjecture. For non-importing firms, a one percent increase in input NTM reduces productivity by 0.8 percent and is not statistically significant; however, importers experience 1.7 percent reduction in productivity. The absence of a significant effect on non-importers indicates that the reduction in NTMs has a direct impact on firms that use intermediate inputs, but does not spill over to the entire industry.

Moreover, food companies that import are 25.5 percent more productive than non-importers. This finding is consistent with the heterogeneous firms model and fixed costs of importing, such that only the most productive firms find it profitable to import intermediate inputs and equipment.

In column (3) we control for input tariffs. The effect of input NTMs on importers remains negative and significant, while the effect of input MFN tariffs is negative but not significant. In column (4) we control for the level of protection against foreign competition in final good markets by adding output NTM and output MFN controls. Both input and output NTMs have negative effects on productivity, while the effect of input MFNs on importers turns more negative and significant. The size of the effect for variable input MFN is consistent with other findings in the literature – a 1 percent reduction in input MFN tariff is associated with 1.8 percent increase in productivity. The difference between the coefficients of input MFNs in models (3) and (4) can be explained by an omitted variable bias, as output and input tariffs are correlated with each other.

In column (5) we control for exporting status. Exporters are 11.3 percent more productive than non-exporters. This corresponds well with the theoretical model of Melitz (2003), which asserts that only the most productive firms are able to cover the fixed costs associated with expanding into the foreign market. This has also been confirmed in many other empirical studies (Bernard et al., 2003).

Finally, in column (6) we use a one-year lag for our policy variables because they may have a delay in influence. This step also reduces endogeneity concerns. However, lagging the variables of interest does not change the sign, nor the significance levels of the coefficients of the variable of interest – the interaction of importing and input NTMs in fact turns more negative. Output NTMs and input tariffs also remain strongly negative and significant.

Notes: The dependent variable is the natural log of TFP estimated on the quantity-based sample of monoproduct firms. Robust standard errors in parentheses. Model (6) uses a one year lagged values of all trade policy variables – input and output NTMs and MFNs.

The effect is heterogeneous and depends on the type of NTM. Sanitary and phytosanitary and ecological measures on imported inputs have a stronger negative effect on the productivity of those firms that used imported inputs more intensively prior to the episode of trade liberalization in Ukraine in 2008-2012. Importantly, we find that the effect of all types of NTMs on quantity-based productivity measures is always more negative than the effect of NTMs on revenue-based productivity. This is consistent with our prior expectations that firms respond to stricter NTM regulations by adjusting prices upwards to soften the impact of trade policy on their performance. Other trade policy variables, such as input and output tariffs and NTMs on outputs, also tend to have negative effects on productivity.

This result shows the importance of controlling for the effects channeled through changes in prices when estimating the effects of policies on productivity. In terms of policy implications, our results show that the negative effect of imposing NTMs on productivity should be taken into account when policy makers consider a policy to address legitimate public concerns about food quality and safety.

These findings indicate that public health and safety is more efficiently protected through the control of outputs rather than through the introduction of non-tariff measures on inputs. Also, it is more efficient to regulate and ensure product quality and safety through the control of production process (e.g., HACCP) because the requirement to certify equipment is less detrimental to productivity than a requirement to implement SPS measures.