Putin, Путин: A descriptive analysis of the Twitter universe

Putin, Путин: A descriptive analysis of the Twitter universe

On February 24 th, Russia started the next stage of its invasion of Ukraine. Ever since, the Ukraine – Russia war has been a headline in news media and a trending topic on social media. In this column, we provide some facts about public engagement and public discourse on Twitter about the war. 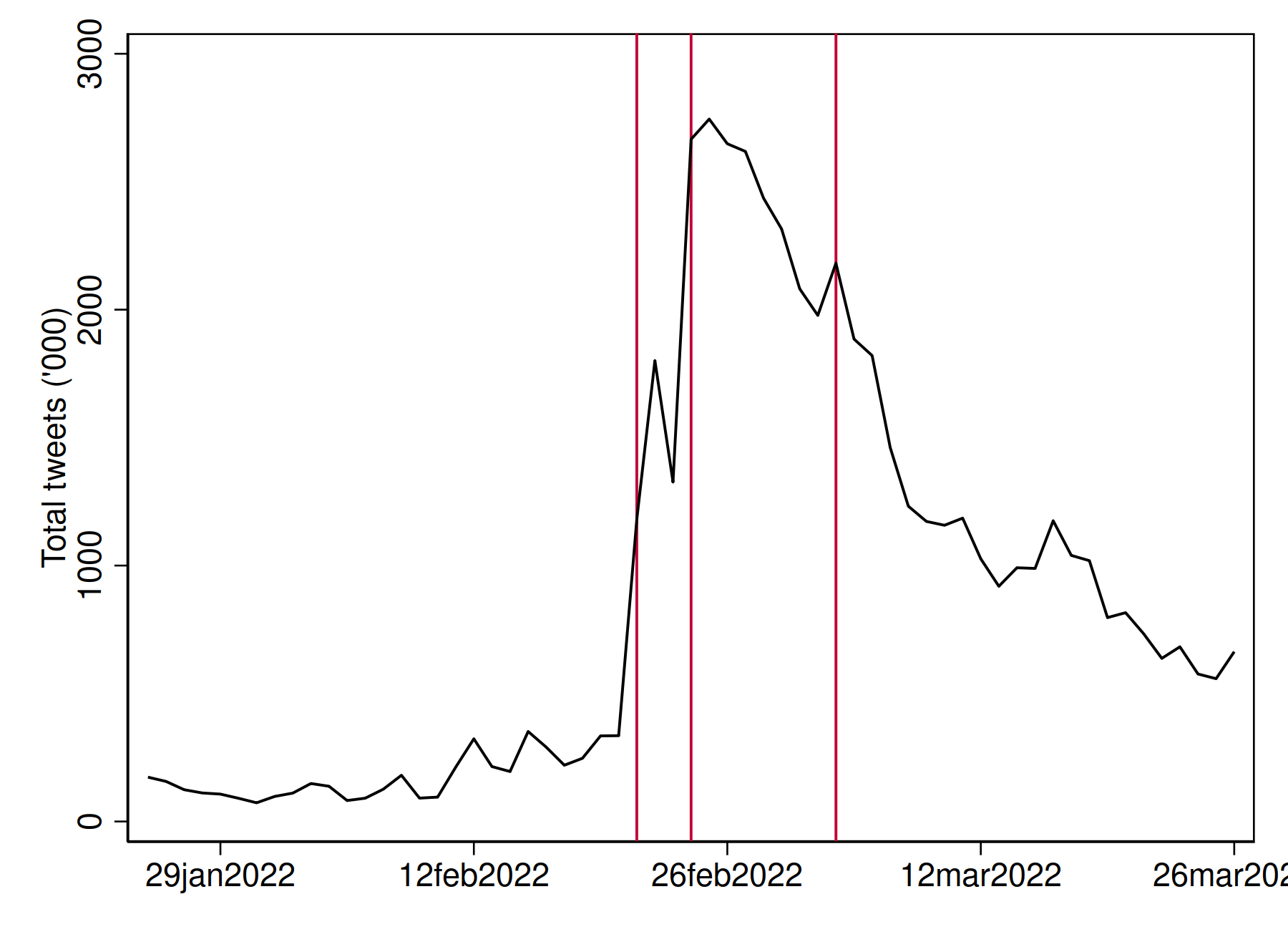 As shown in Figure 1, at the beginning of 2022 there was not much discussion on Twitter that mentioned Putin (on average, less than 10,000 tweets a day). However, the number of Putin-related tweets started increasing on February 21st, when Russia announced its recognition of so-called “people’s republics” in Eastern Ukraine. The number of tweets created on 24 February, when the war started, was more than 2.6 million and peaked on 25 February with about 2.7 million. Since then, the number of tweets containing Putin or Путин keywords has levelled off. Yet, the daily volume of tweets is still in the range of 50,000 – 100,000 (5-10 times more than before February 24th). 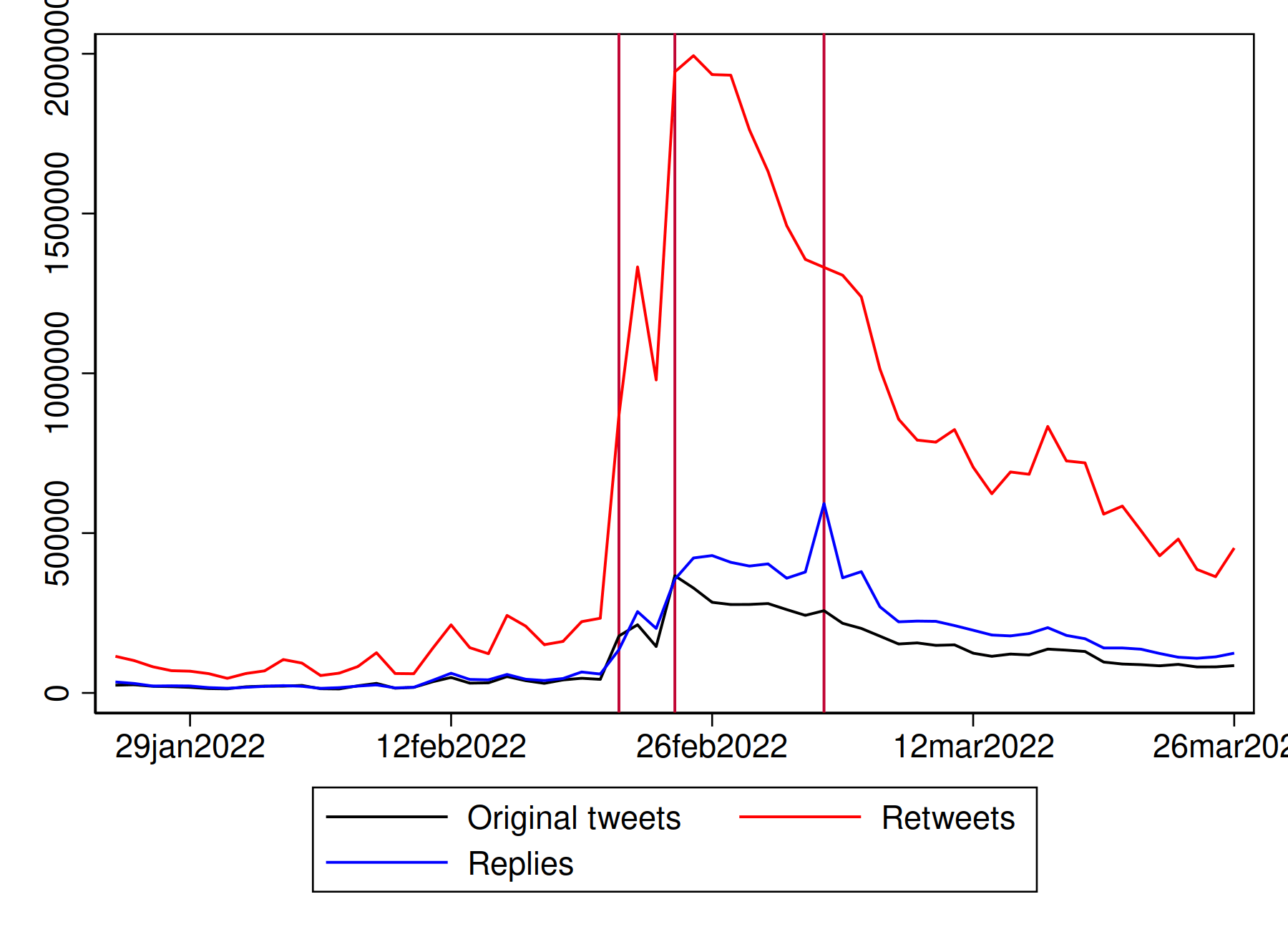 Figure 2 shows that most of these tweets were retweets while the original tweets only account for about 15% of total tweets created. The number of original tweets has decreased since the end of February, but it still remains above the pre-war level. 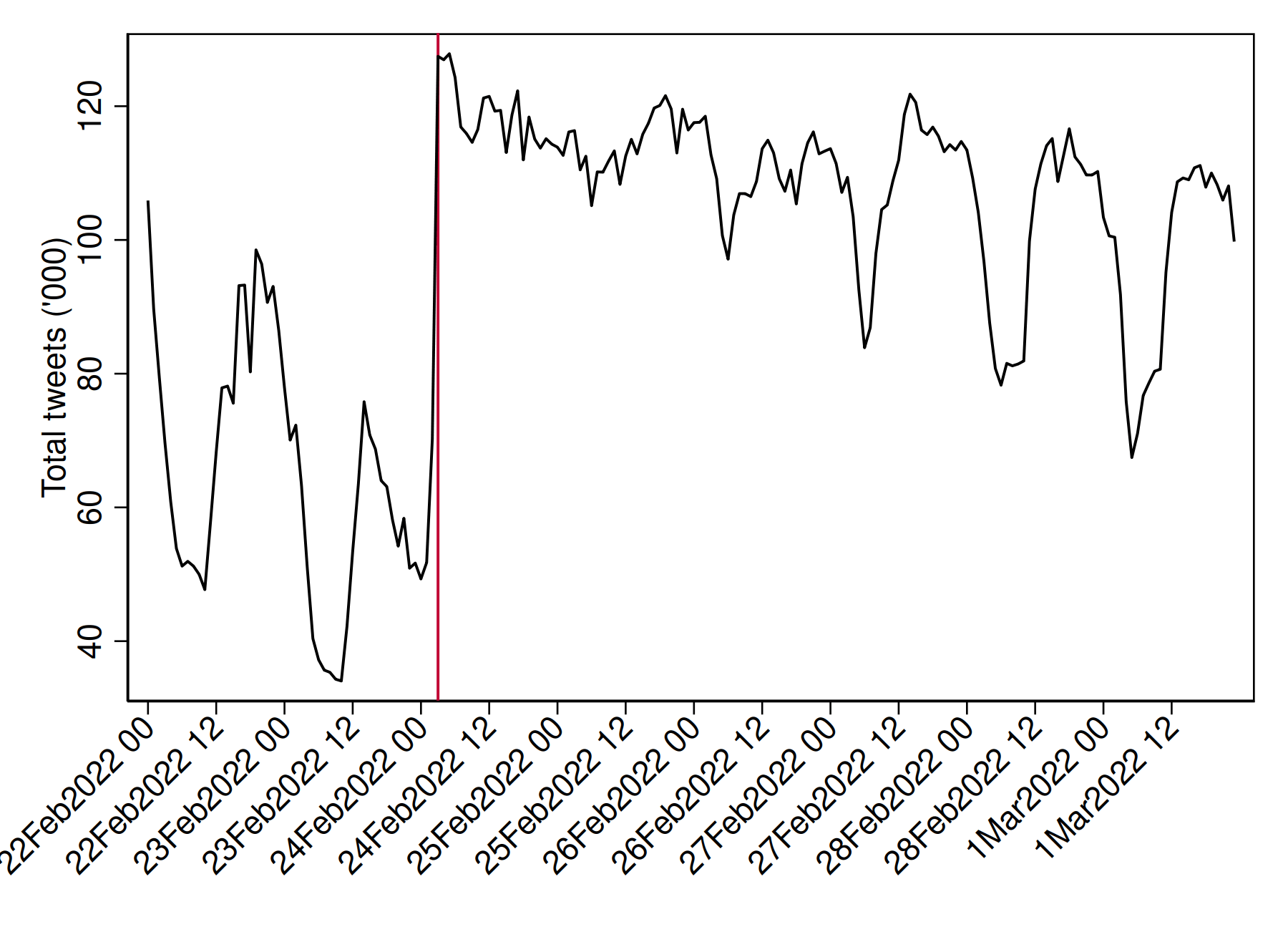 A closer look at the hourly number of tweets between 22 February and 1 March suggests an interesting pattern (Figure 3). Particularly, as opposed to the “sleeping” behaviour observed on “normal” days, that is, Twitter users tend to reduce their tweeting activities at night (between midnight and 6 am, UTC time), there was no sleeping period observed on 24 and 25 February. This suggests that the war is a high-profile event that gets constant attention from people.

Hashtags are widely used on Twitter to give the tweet context and also to allow Twitter users to track certain topics that they are interested in. An analysis of all hashtags mentioned in 53 million tweets in our dataset shows that more than 171,000 hashtags were used when people talked about the war. The most frequently used hashtags are those referring to the war generally (#war, #wwiii, #ww, #worldwar, #ukraineunderattack, #ukrainewar, #ukraineconflict); hashtags against the war (#stopwar, #nowar, #peace); and those expressing anti-Putin sentiment (#stopputin, #putinwar, #putinswar, #putinhitler, #putinwarcrimes, #putinisawarcriminal, #putinwarcriminal, #warcriminalputin, #russianwarcrimes, #russiawarcrimes, #putinisawarcriminalukr,#putincriminal). 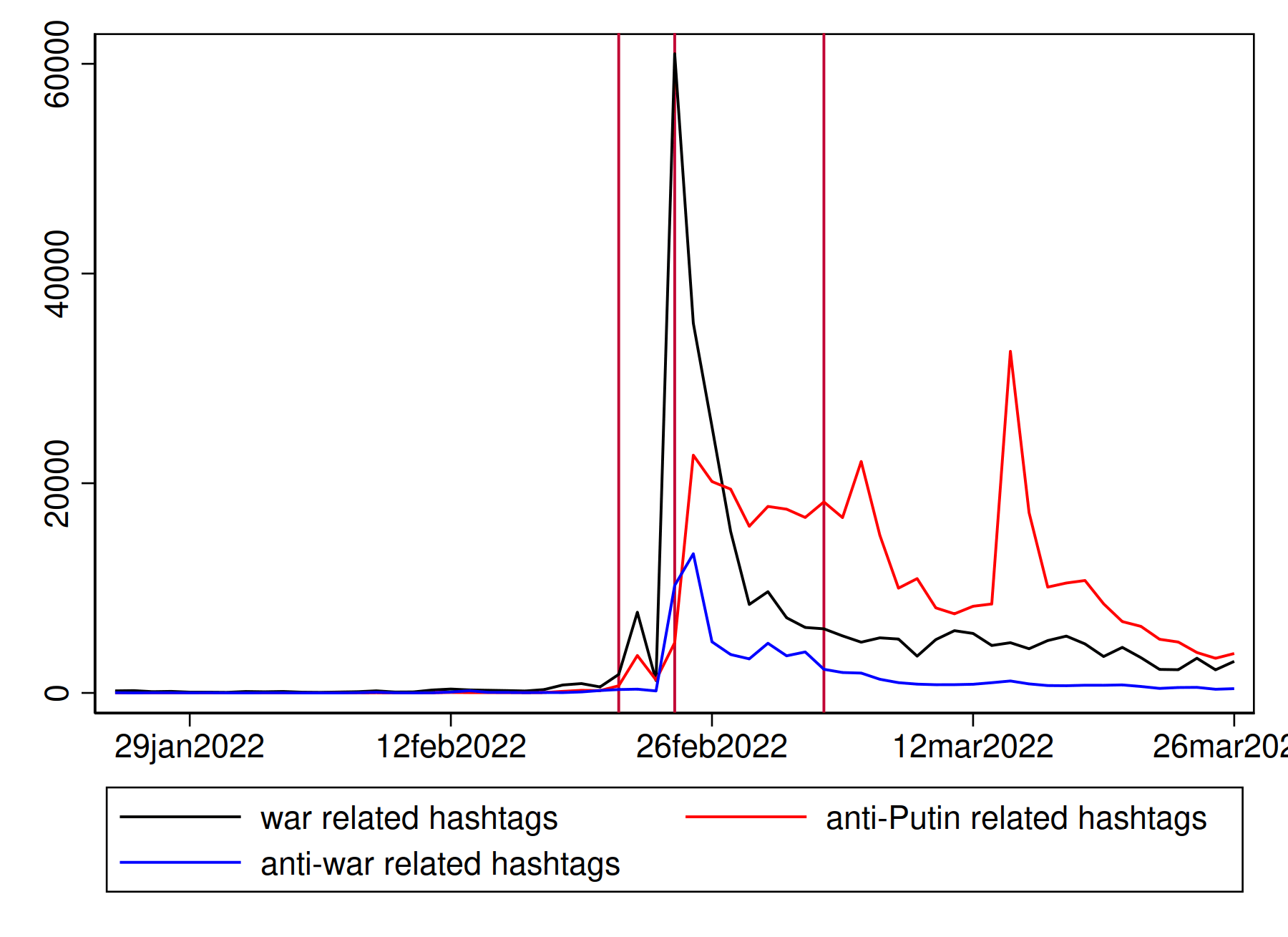 Interestingly, while the number of tweets with the war and anti-war related hashtags decreased after the peaks on 26-27 February (Figure 4), the number of tweets mentioning the anti-Putin hashtags only showed the decreasing trend after the Russian government’s social media crackdown on 4 March, which led to restricted access to Twitter in Russia. However, there was a spike in the number of anti-Putin tweets, which coincided with the timing of Elon Musk’s tweet challenging Putin to single combat.

Overall, our descriptive analysis reveals how Twitter discourse about the Ukraine – Russia war has evolved over time. As the war continues, further and more detailed analysis is required to understand how social media platforms have been used as part of Ukraine’s war effort; or how misinformation about the war emerges and spreads.