It has been widely recognised that on the way to success entrepreneurs usually face a couple of challenges. The pressure to balance work and life, financial uncertainty, and peer competition are among some typical struggles for running a business. These difficulties, in turn, affect the well-being of entrepreneurs. Given the fact that entrepreneurs’ well-being is closely related to their business performance and the development of the whole economy, economists and policy makers have paid more attention to the factors that can improve entrepreneurs’ satisfaction.

Researchers have long shown that entrepreneurship can bring happiness to individuals due to the autonomy, job self-efficacy and job security related to self-employment (Benz and Frey, 2008; Lange, 2012; Millán et al., 2013). Entrepreneurial satisfaction in its turn is related to the level of financial development as greater financial development allows entrepreneurs to enjoy a higher level of job independence (Bianchi, 2012). However, these existing studies provide limited evidence on entrepreneurs’ well-being in emerging markets where the business environment is different from the one in developed countries.

The results show that being self-employed is negatively related to job satisfaction. In other words, Ukrainian entrepreneurs are generally less satisfied with their jobs than salaried workers (Table 1). The negative effect is more pronounced among rural entrepreneurs. The dissatisfaction among Ukrainian entrepreneurs suggests the existence of “necessity”, or “pushed” entrepreneurs who enter self-employment due to the lack of paid jobs rather than their intrinsic motivations. It to some extent also reflects the fact that for some reasons like tax payment, Ukrainian individuals might be forced to enter self-employment despite their unwillingness.

Table 1. Self-employment and satisfaction in Ukraine

Average marginal effects are presented in the table. Standard robust errors are in parentheses. ∗, ∗∗, and ∗∗∗ denote 10%, 5%, and 1% significance level, respectively.

Inspired by this finding, the authors then examine whether financial development could improve entrepreneurs’ satisfaction. Ukraine provides an ideal example to explore this matter for several reasons. First, Ukrainian entrepreneurs often report limited external finance as one of the major obstacles during venture development as they are less likely to have significant personal wealth for business. Second, the level of financial development is different across regions in Ukraine and entrepreneurs are located in both more and less financially developed regions. This provides an interesting setup to investigate the link between the variation in access to credit and local entrepreneurs’ well-being.

Figure 1. Marginal effects of self-employment on satisfaction at different levels of financial development in Ukraine 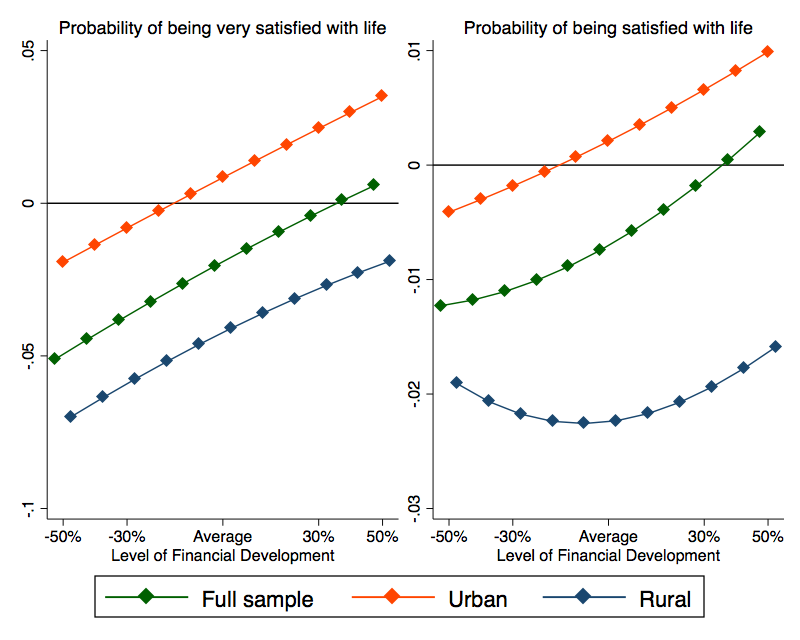 Further investigation shows that greater financial development is not related to the probability of becoming self-employed while negatively related to the likelihood of moving out of self-employment in Ukraine (Table 2). This to some extent indicates that entrepreneurship in Ukraine might be driven by some “push” factors, such as unemployment duration or low earnings from paid jobs, rather than opportunities brought by relaxed financial constraints. However, once an individual enters entrepreneurship, better access to credit could keep him/her in self-employment longer.

Based on these findings, the study offers several implications concerning entrepreneurial well-being. First, the formal financial sector should be reformed to become more attractive – for example, lending process could be shortened and streamlined. Hence, individuals would use more formal credit and benefit more from its development. Second, banks should consider expanding services and credit in rural and less financially developed areas to benefit individuals living in those areas. Third, government assistance in the form of financial support or advanced training and education should be provided for rural entrepreneurs, especially “pushed” entrepreneurs. The latter is to ensure the sustainable growth of the business even after the assistantship is withdrawn.