According to a journalist from the German media Focus Online, by early May, russia had spent $34 billion on the war against Ukraine. Another $ 1 billion is spent every two days, the author says, given the same intensity of hostilities. The world is imposing sanctions on russia to bleed out the russian economy and not give them new money to commit murders in Ukraine, and international companies are leaving its market. There have also been calls from Ukraine’s Ministry of Defense not to finance russian missiles with their taxes.

However, not all international companies were ready to leave such a large – albeit bloodthirsty – market. Therefore, we decided to look at the largest taxpayers in russia, namely tobacco companies.

This article was prepared as part of a collaboration between VoxCheck and the Center for Democracy and Rule of Law (CEDEM). For details on cooperation, see the Memorandum between CEDEM and VoxCheck.

Tobacco companies are major taxpayers in each country, because along with other taxes, such as income tax or personal income tax, the state also receives excise tax from each pack sold. Therefore, the share of taxes in the price of tobacco products is higher than for other products.

russia is no exception. It is a large, multimillion-dollar market. According to the WHO, more than a quarter of the population aged over 14 smoke, i.e., over 30 million russians. Therefore, the companies could not quickly give up such a slice of their revenue.

Thus, in 2020 (the latest data available for all the companies), the four international tobacco giants – Imperial Tobacco, Japan Tobacco International, British American Tobacco, and Philip Morris – paid $7.8 billion into the russian budget, i.e., 12.6% of russia’s entire military budget ($61.7 billion) for the same year. Next we consider the contribution of each of these companies. 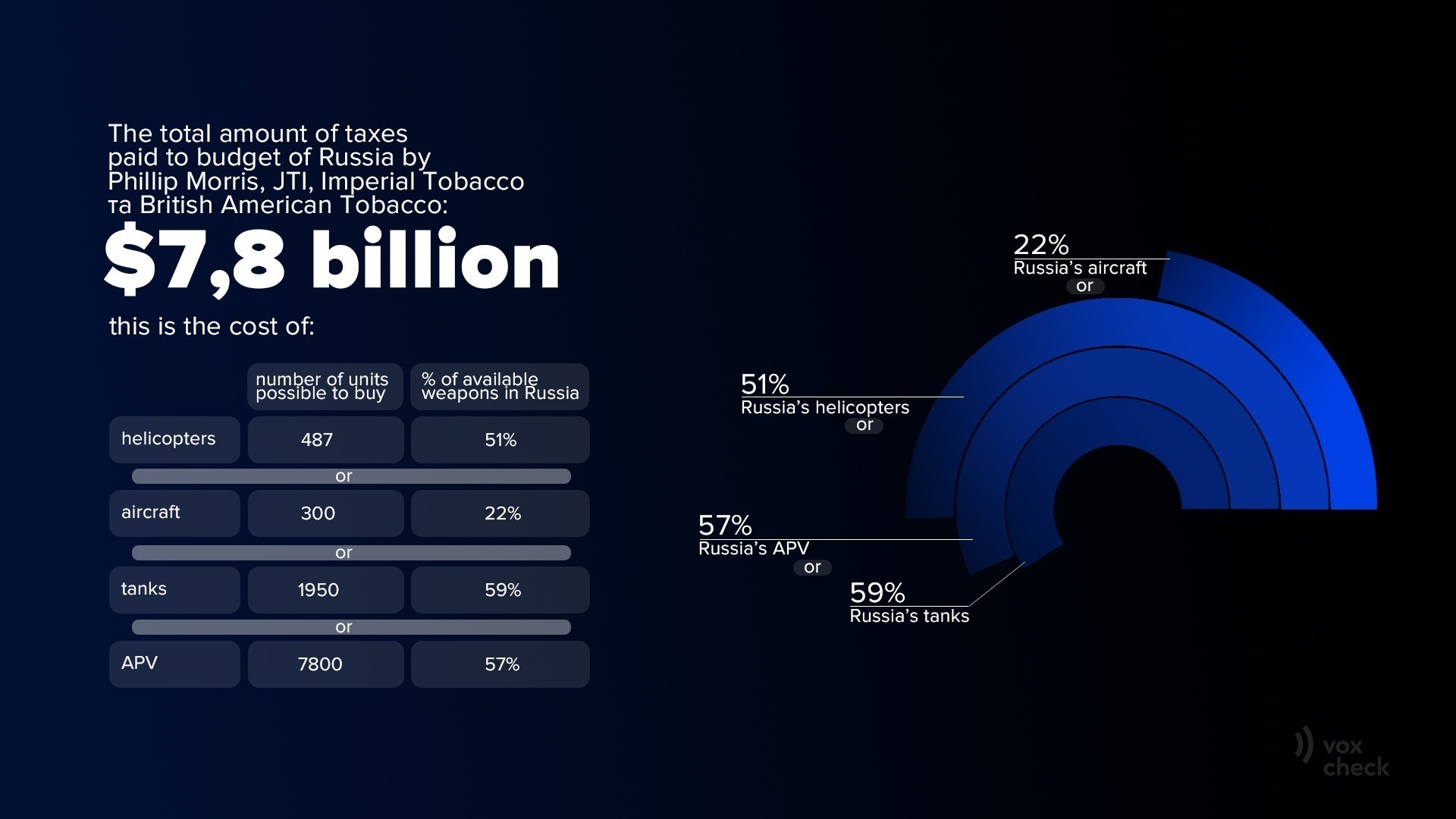 Therefore, the companies could not quickly give up such a slice of their revenue.

On March 11, a russian tank fired at an elderly home in the town of Kreminna in the Luhansk region. More than 70 people were there at the time of the shelling. Fifty-six people died on the spot. In March, another russian tank fired on a car in the Kharkiv region, carrying a family and two children. In April, the russians fired from their tanks on residential buildings in Mariupol from point-blank range.

Based on Ukrainian intelligence data, the Military Times found that russia had prepared 1,200 tanks for the invasion. Seven hundred forty-five of them could be purchased by the russian federation with tax revenues from Philip Morris in 2020. 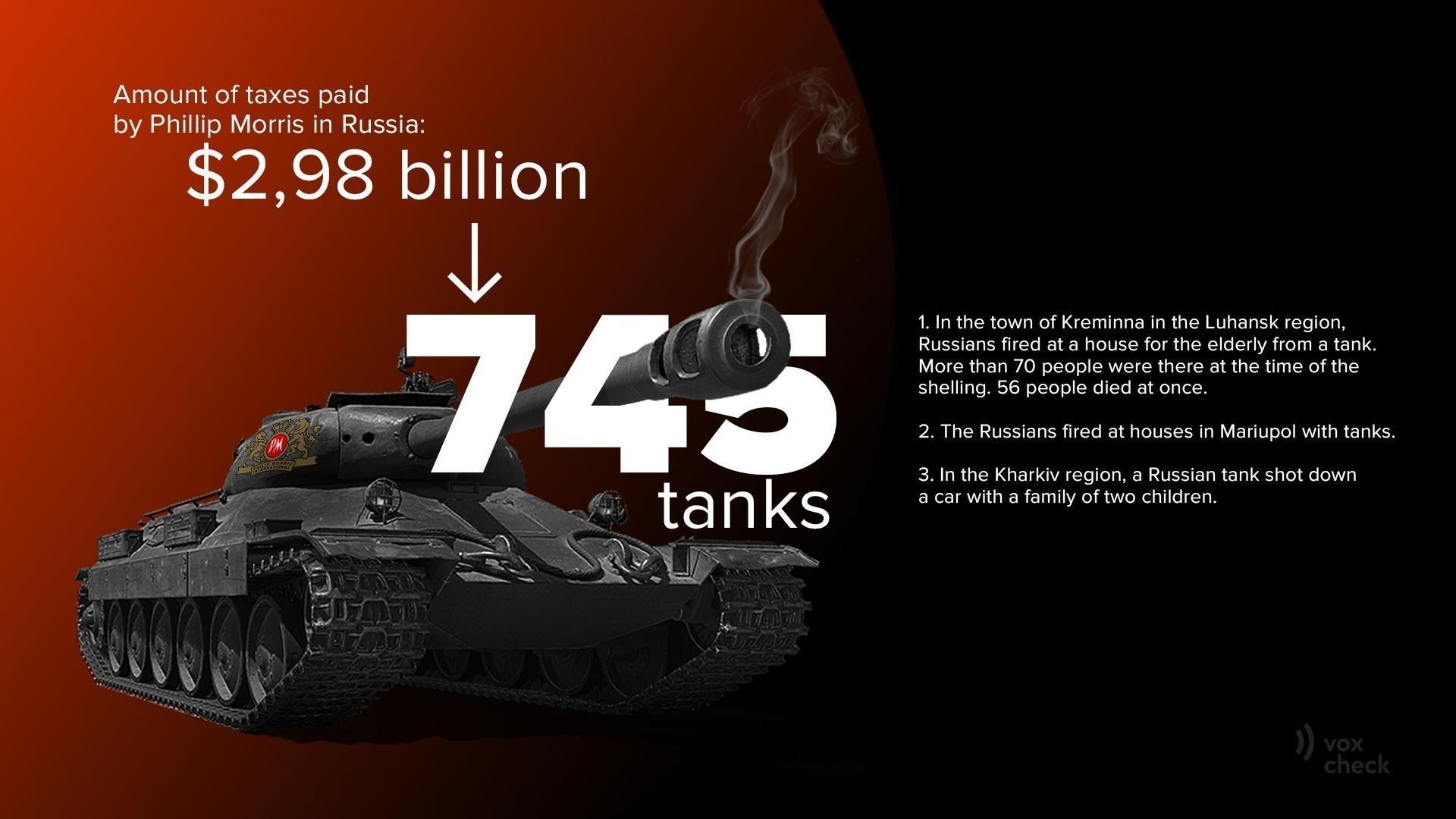 On March 1, russia struck the center of Kharkiv with a “Kalibr”-class missile. Given that one missile costs $6.5 million, russia could use $2.98 billion paid by Philip Morris as 2020 taxes to purchase 458 such missiles. 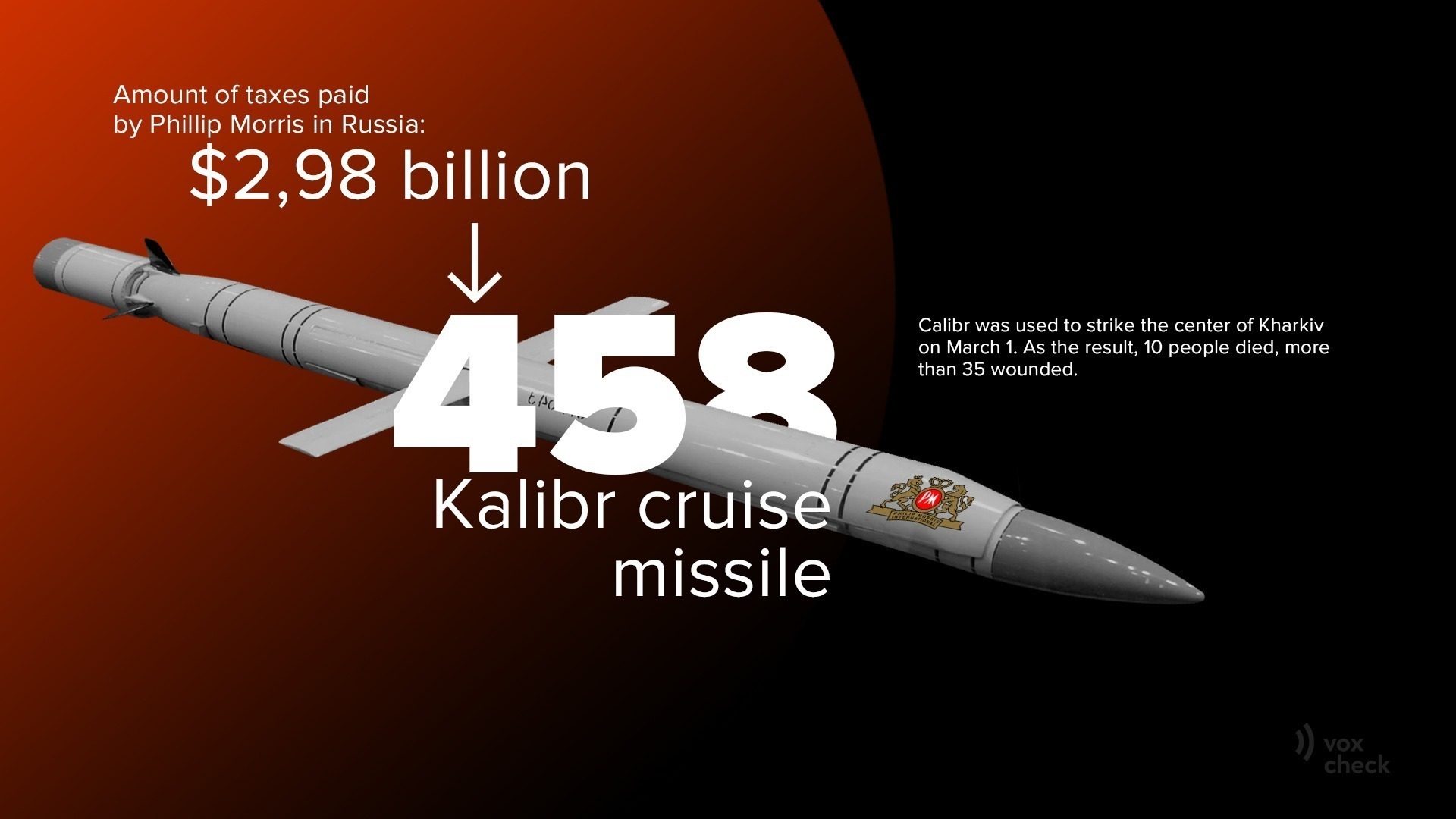 $2,98 billion in taxes paid by Philip Morris in 2020 is nearly 5% of russia’s entire defense budget for the same year.

Like Imperial Brands and BAT, Philip Morris International announced on March 9 “the suspension of its planned investments in the Russian Federation, including all new product launches and commercial, innovation, and manufacturing investments. PMI has also activated plans to scale down its manufacturing operations in Russia amid ongoing supply chain disruptions and an evolving regulatory environment.” At the same time, the company emphasized it would continue paying salaries to employees.

Nevertheless, the company repeated that it continued paying wages to employees and working on options for leaving the russian market in an orderly fashion. At the same time, the company is considering expanding into the US market for other alternatives, including vape and nicotine pouches (a sort of “lollipops” with nicotine and no tobacco) to make up for losses from leaving the russian market.

However, researchers at Yale University, monitoring the companies that have not yet withdrawn from the russian market, rate Philip Morris as a “С” company, i.e., the one that has curtailed its operations but has not exited the market.

At about the same time, enemy aircraft carried out air strikes on Chernihiv. The ruscists used the Su-25 to drop bombs on a peaceful city. The Su-25 was subsequently shot down, and the pilot was taken prisoner. The same aircraft likely bombarded residential buildings in Irpin.

The cost of such an attack aircraft is about $11 million. With tax amounts paid by Japan Tobacco International in 2020, one could purchase over three hundred such jet aircraft. 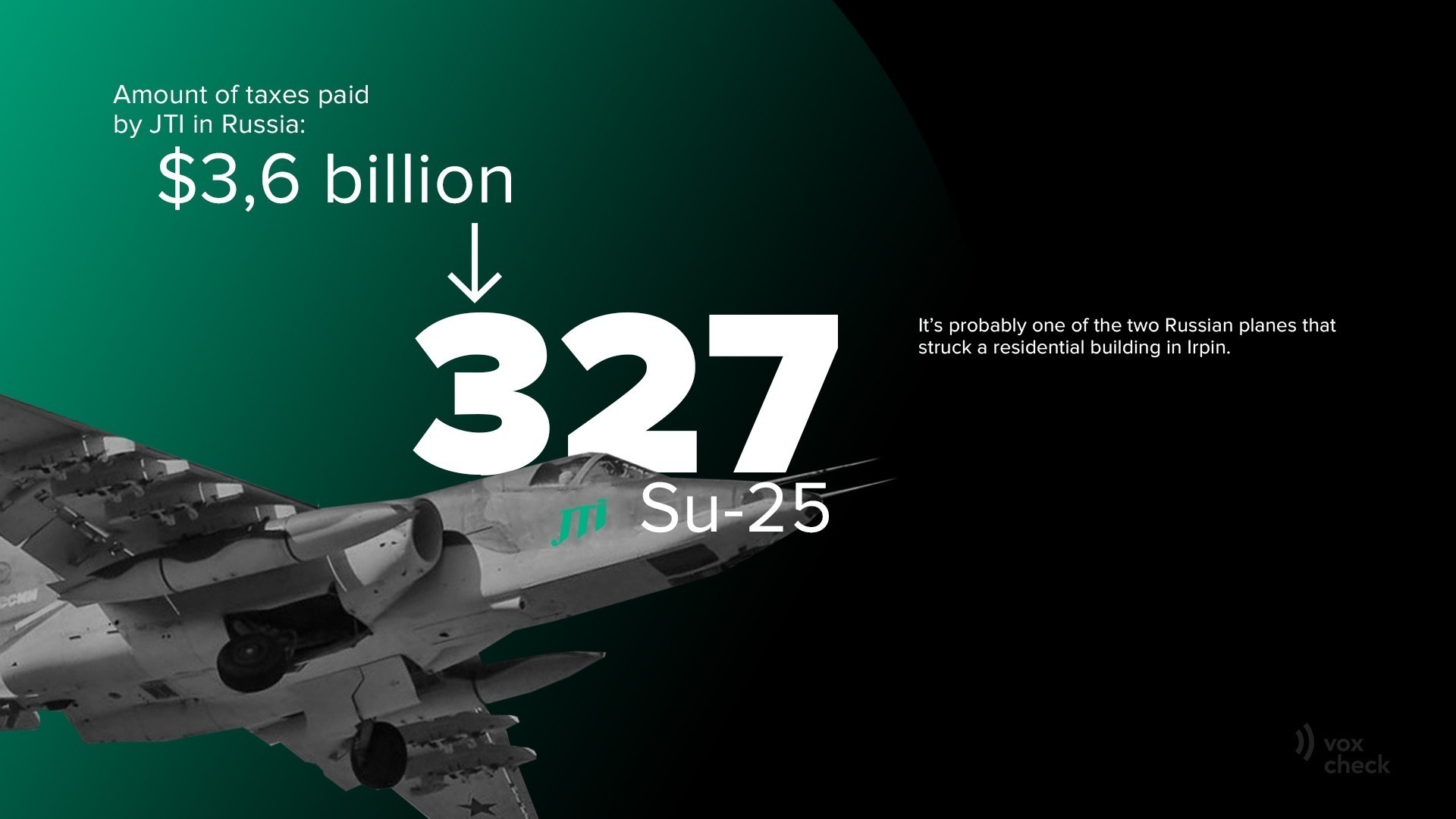 Taxes paid by this tobacco company would also be enough to buy 288 Smerch-M multiple rocket launchers. In late May, russians used MLRS to shell the Donetsk region, destroying 38 civilian objects. 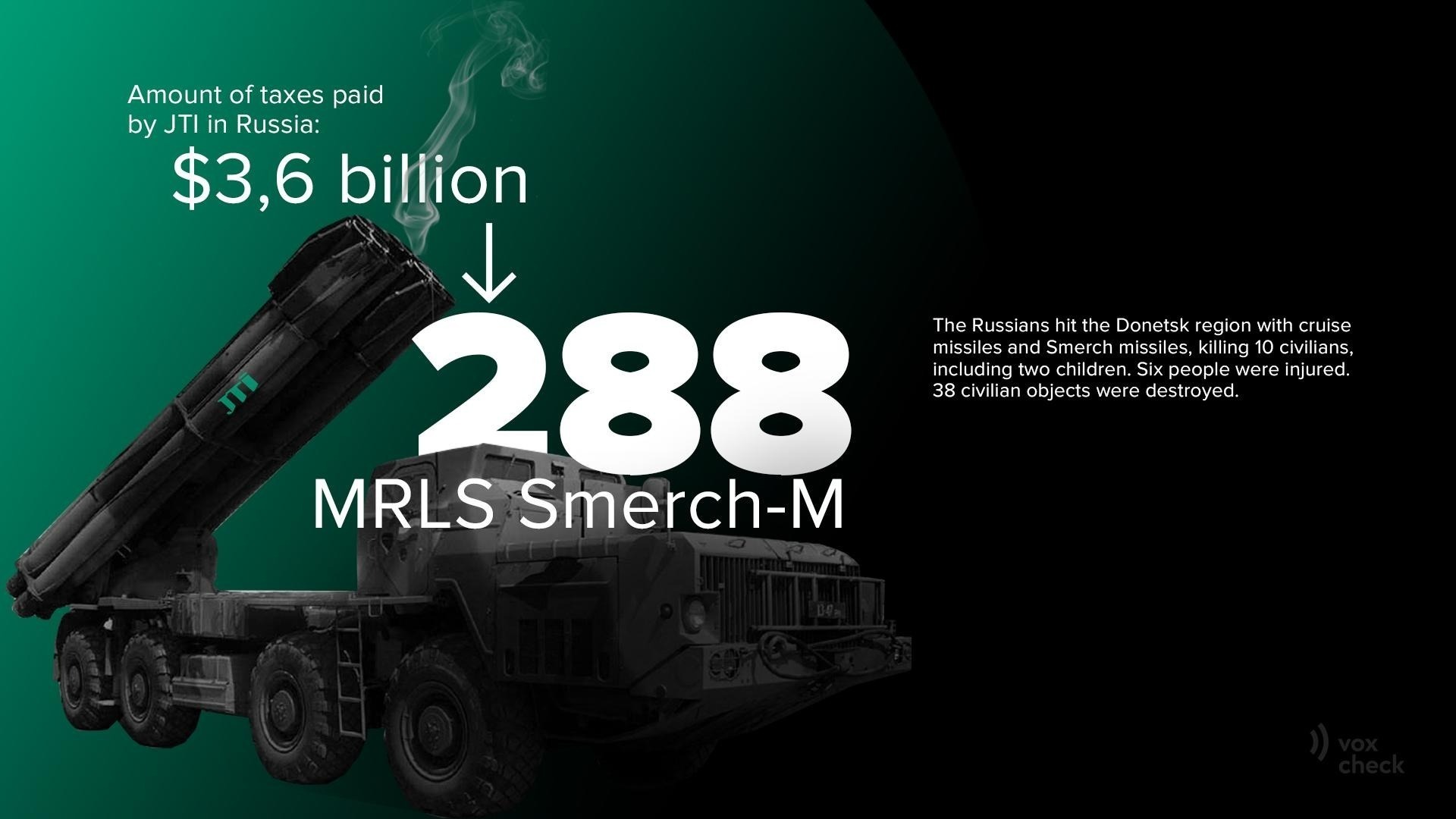 The day after Imperial Brands’ statement, on March 10, Japan Tobacco announced it would curtail operations in the russian market. Thus, the company promised to suspend all new investments in the country. However, it failed to promise to close its factories, even though continued operations would keep pumping russia with the money needed to continue the war in Ukraine.

“The challenges of operating in Russia at this time are unprecedented, and JTI needs some time to assess the long-term implications of the situation which all large international investors in Russia are currently facing. Unless the operating environment and geopolitical situation improve significantly, JTI cannot exclude the possibility of a suspension of its manufacturing operations in the country,” the company statement said.

However, russia is one of the largest markets for JTI, where it has four factories and 70 offices, employing 4,000 people across the country. The company owes such a leadership position to the enterprise “Donskoy Tabak,” which the Japanese company bought from oligarch Ivan Savvidi in 2018 for $1.6 billion. He is considered one of the Kremlin’s “wallets“ and avid supporters.

Notably, 30% of JTI belongs to Japan’s Ministry of Finance. The government joined global sanctions against russia, and JTI announced only in late April that it was considering the sale of russian operations.

In the research by Yale University, JTI was rated “D,” which is worse than their colleagues’ from Philip Morris, for suspending future investments in development and marketing but  actually continuing its operations in the aggressor country.

In March 2022, the beginning of russia’s full-scale war against Ukraine, the ruscists brought their equipment to Ukraine, including hundreds of BMDs (airborne infantry fighting vehicles). In particular, the occupiers used BMD-4 to shoot at civilians on the streets of then-occupied Bucha. The price of one BMD-4 is about $1.4 million. With taxes paid by Imperial Brands in the previous fiscal year, russia could purchase 606 such killing machines. 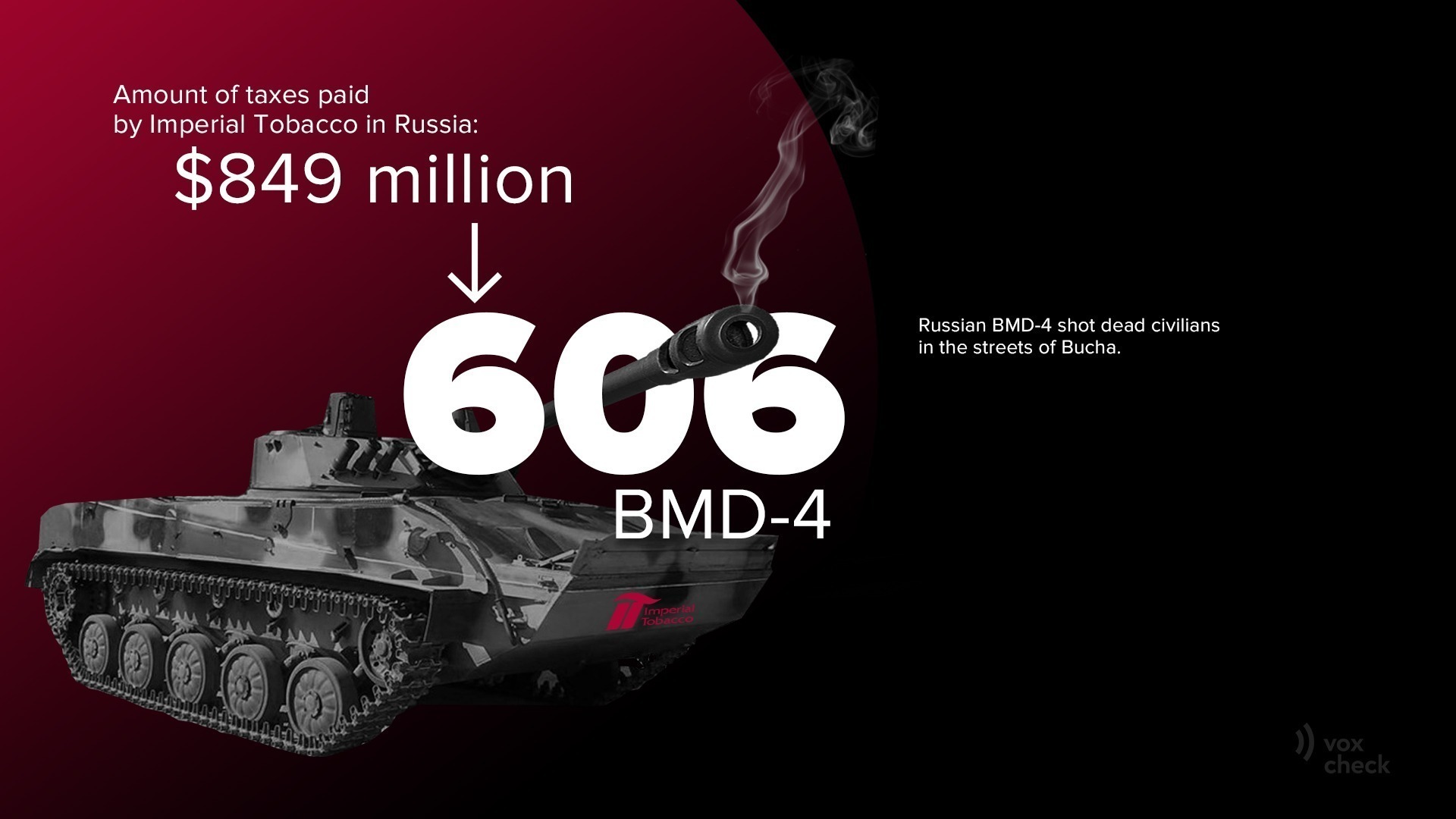 The same amount of tax revenue equals the cost of the notorious missile cruiser “Moskva.” It was supposed to play a crucial role in the landing operation in southern Ukraine. 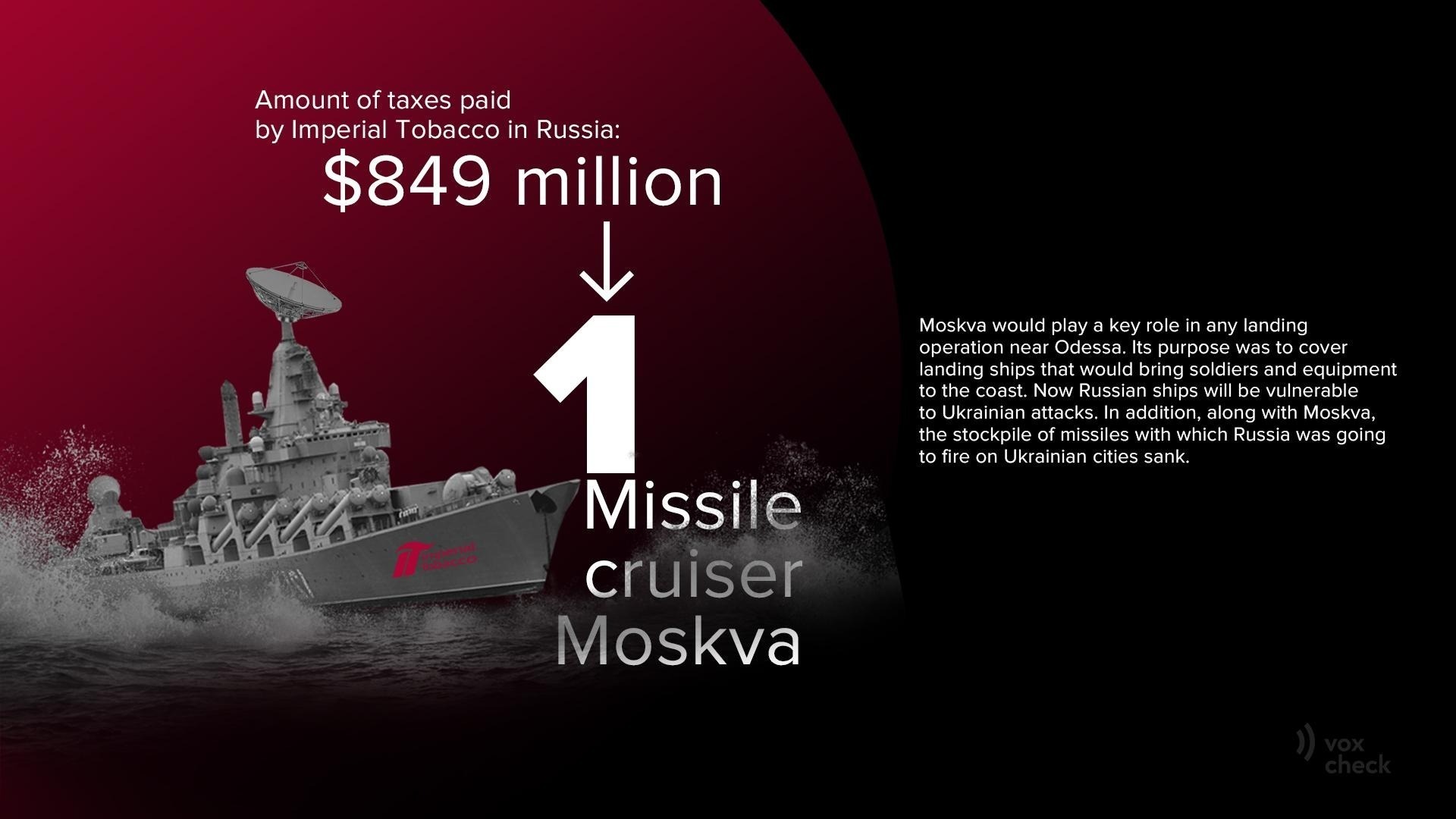 At the beginning of the full-scale war, on March 9, Imperial Brands was the first tobacco company to suspend operations in russia: both sales and production.

“Owing to the recent events, we have suspended all operations in Russia as of today. This decision includes the halt of production at our plant in Volgograd and the cessation of sales and marketing activities,” the Imperial Brands Group’s statement said.

Despite this, the company continued to pay salaries to its employees. On April 20, Imperial Brands transferred its russian business to unnamed russian investors.

“The transaction aligns with our previously announced intention to divest our entire russian operation as a going concern in order to provide the best outcome for our 1,000 Russian colleagues,” the company said in a statement.

That is, the companies that belonged to the Imperial Brands group, including the plants, will continue operating in the russian market but with new beneficiaries. And taxes will continue to support the occupying country’s budget anyway, this time through third parties.

However, Imperial Brands stands better in the Yale University Database than its tobacco colleagues: the researchers rated it “А” among those who exited russian operations.

On the morning of April 8, the occupiers’ Point-U missile struck the Kramatorsk railway station. The strike killed at least 52 people and injured 109. russia continues to use Point-U systems, though it previously announced that it had withdrawn “obsolete systems” from service. Independent investigators from InformNapalm and Conflict Intelligence Team confirmed russia’s use of these systems. Using the russian Tochka-U was documented in the Donetsk and Chernihiv regions.

Forbes Ukraine calculated the cost of such a missile at $300,000. Thus, with the $371 million that British American Tobacco paid in taxes into russia’s budget in 2020, one could purchase 1,236 such missiles. 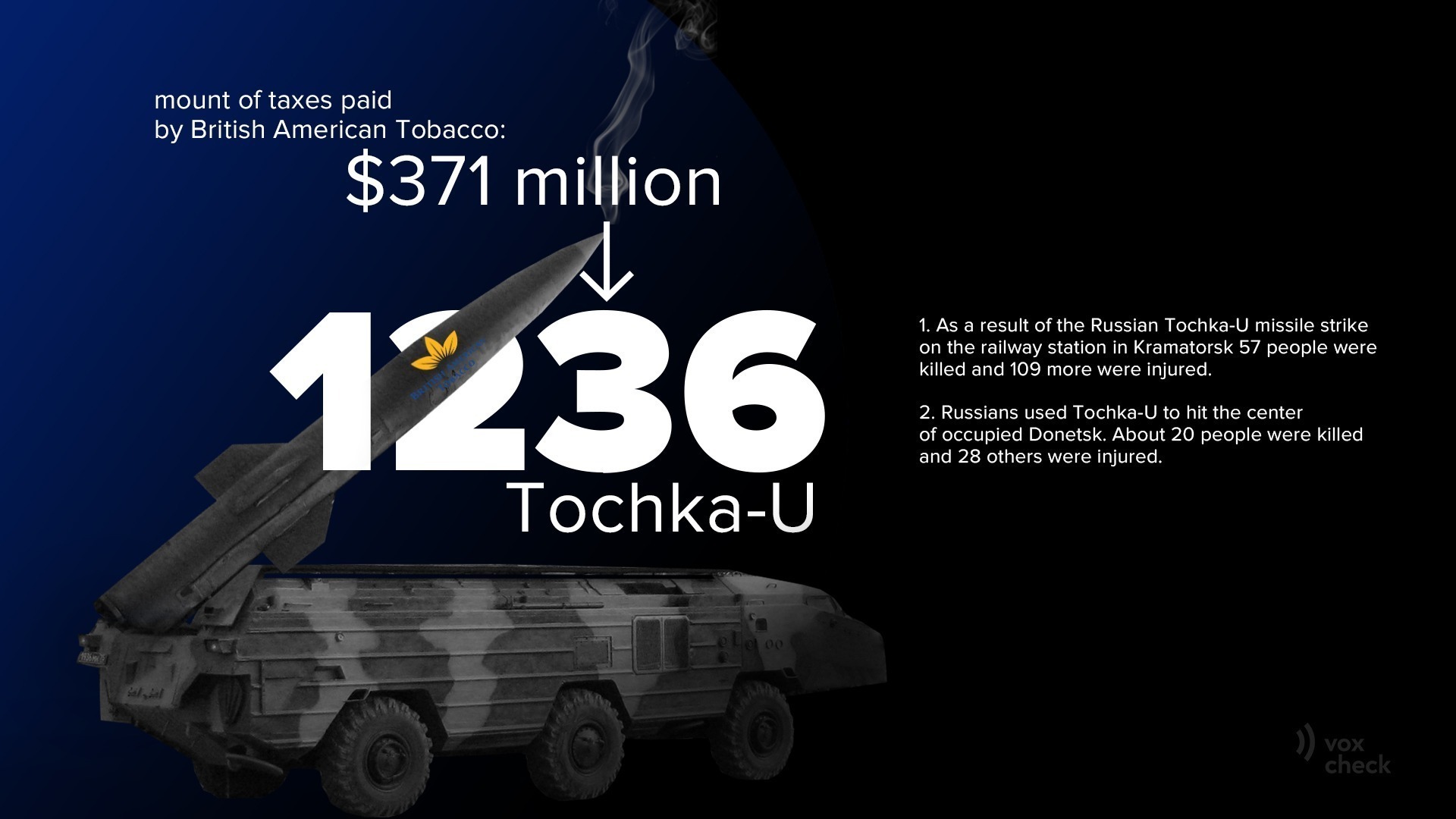 Alternatively, russia could buy seven Su-30 fighters for the same amount of tax earnings. russians likely used the aircraft on May 12 to fire a missile at Novgorod-Siverskyi in the Chernihiv region, killing three and injuring 12 people. 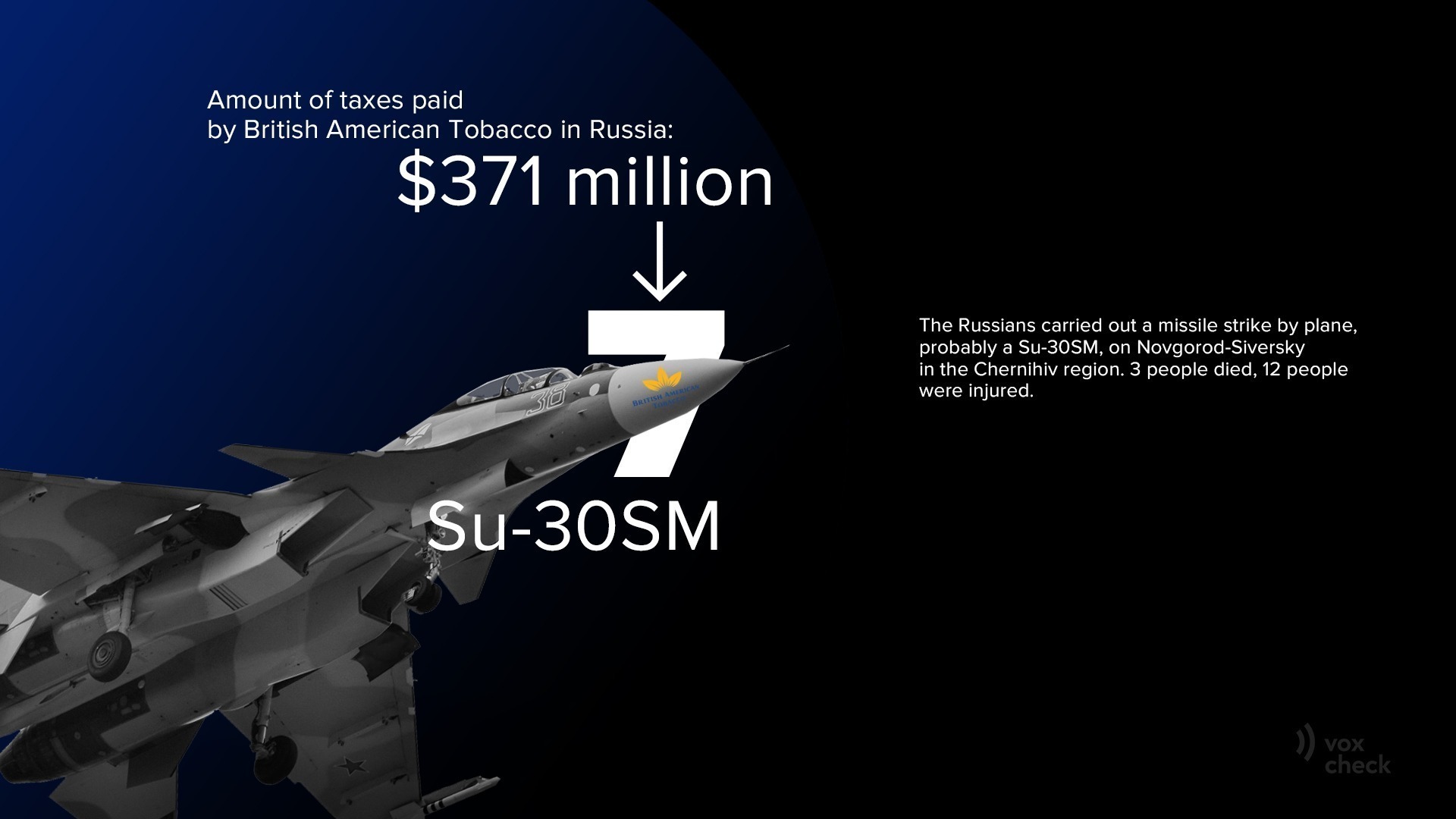 British American Tobacco Russia is one of russia’s tobacco industry leaders. The company’s share amounts to 20%, and its moscow, saratov, and st.petersburg factories employ 2.5 thousand people (3.5 thousand, according to other sources). Ukraine and russia account for 3% of BAT’s revenues and a slightly smaller share of the company’s profits.

On March 9, the same day as the Imperial Brands, BAT released a statement containing the company’s decision regarding operations in the russian market.

However, the company’s decision was changed two days later, on March 11:

“We have concluded that BAT’s ownership of the business in Russia is no longer sustainable in the current environment. Today, we have initiated the process to rapidly transfer our Russian business in full compliance with international and local laws. <…> Upon completion, BAT will no longer have a presence in Russia.

The statement also said they would continue to pay their employees and do their utmost to safeguard their future employment.

Company representatives may not publicly comment on the terms of internal processes of the company’s transfer to local ownership or the transfer’s financial consequences. However, in early June, the company once again confirmed that the process of leaving the russian market continued.

Despite such positive signals, the company’s productive resources (like Imperial Brands’) will continue operating in the russian market. Paying salaries and working factories means that the russian budget will continue receiving tax revenues that can be used to finance the continuation of the war. But again, through third parties.

However, to operate successfully, the company will need new management. So while the process of leaving the market is underway, BAT (like Imperial Brands) is rated “A” in the Yale University Database among the companies that exited the russian market.

It goes without saying that taxes end up in a “single pot,” and it is impossible to determine what was purchased with taxes paid by this or that company. However, working in a country that has been waging an aggressive war in Ukraine since 2014 and razed several Syrian cities to the ground in 2015 is supporting the aggressor anyway. If they do not buy new ammunition using tax earnings, they might still finance the production of “Tornadoes” or “Grads” or pay the military or PMCs, committing atrocities in Ukraine. After all, the taxes go to pay salaries, pensions, and social benefits to russian citizens silently supporting the war against Ukraine.

Any operations conducted in russia continue to feed its budget, allowing the occupying country to go on a war footing.

Therefore, our task is to demand that international tobacco giants that are the largest taxpayers in russia leave the russian market as soon as possible.