The authors raise two blocks of questions: first, whether it’s possible to achieve the proposed inflation rates (8%, 6%, and 5% in 2017-2019), and second, whether we really need such milestones — that is, whether low inflation will result in restraining economic growth.

Only time will answer the first question. It may be noted that even though in 2015 inflation was 43.3%, the National Bank managed to achieve its goal for 2016 — 12% (± 3 percentage points) — inflation rate was 12.4%. So, taking into account this experience, it’s possible to achieve results close to the goal (if there are no major negative shocks for the economy).

The second question is more complicated. Indeed, if prices grow faster than the target level, the NBU must limit money supply, which can lead to recession. A classic example are restrictions imposed by the Federal Reserve System headed by Paul Volcker in 1979-1983. In the 1970s, the average annual inflation in the US was 8.1%. To curb these lasting high inflation rates, the Federal Reserve System raised the federal funds rate to 20% in 1981. This led to the 1980-1982 recession, but after 1983 the annual inflation rate averaged 2.8% and never exceeded 5.4%. Such low inflation rate is a reason people in Ukraine and many other countries often prefer dollars to their national currency as a store of value. Moreover, there are many studies that indicate a positive impact of consistently low inflation on gross and direct investments, including foreign investments. Low inflation reduces uncertainty, extends the planning horizon, and allows for long-term investments.

Many countries have had relatively high inflation and high rates of economic growth at the same time. However, is there a causal link? As examples, the authors mention Turkey in 2002-2006 and Poland in 1994-1997. 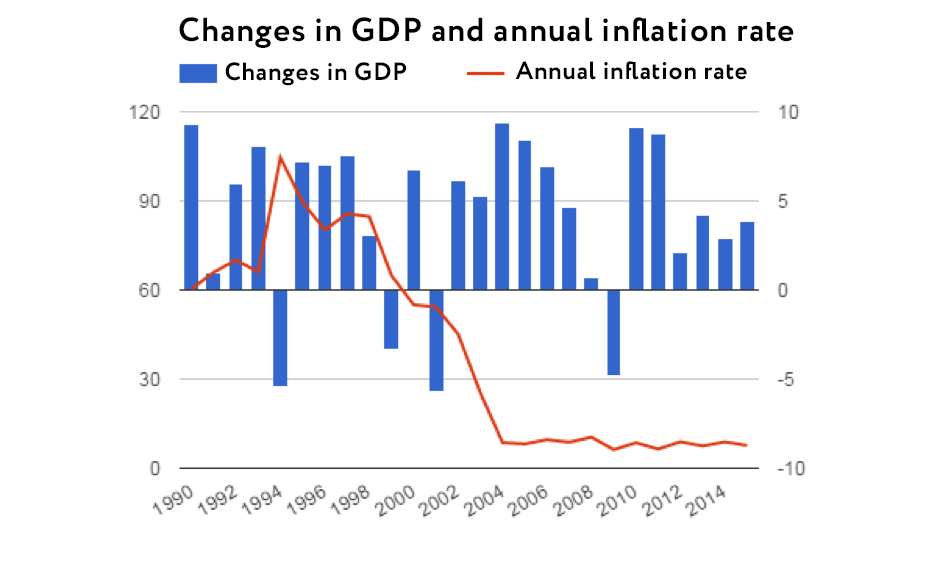 In Poland in the early 1990s, the situation was somewhat different — there was a transition from administrative command to market economy, which in the first stage, just like in Ukraine, caused a rapid rise in prices and economic decline through breakdown of the previous production chains. That’s why growth, which began in 1992, was partly due to the decline in the previous two years.

Even if we stick to the point of view of Grzegorz Kołodko (the Minister of Finance of Poland in 1994-1997, an author of The Polish Alternative), referred to by the authors, that the initial shock was excessive, and the growth mainly resulted from his programme, there are questions about the optimal strategy for Ukraine.

Kolodko writes that the main achievement of his government was the stable reduction of budget spending under conditions of moderate deficit. He believes that high rates of the National Bank of Poland caused damage to the economy. However, he considers them part of the general policy of the central bank, and refers to a quick disinflation from the levels of around 40% annually. In Poland in the mid-1990s, the central bank adhered to the strategy of gradual depreciation of the złoty (so-called Crawling peg) with simultaneous high discount rate, which contributed to a significant inflow of foreign investments that were redeemed in central bank reserves without proper sterilisation of the money supply. It was the primary source of inflation. Since 1998, Poland has been pursuing direct inflation targeting, and for most of this period, inflation has been less than 10%, which didn’t stop the economy from growing on average by 3.5% per year.

In Ukraine, we already see a substantial disinflation — reduction of the target from 12% in 2016 to 8% in 2017 is differs greatly from the disinflation attempts from the inflation levels of 40% per year. Second, we don’t have a significant investment flow from abroad or ties to the exchange rate as the main target. Thus, this year’s inflation target achievement does not require “draconian” measures that can lead to recession. 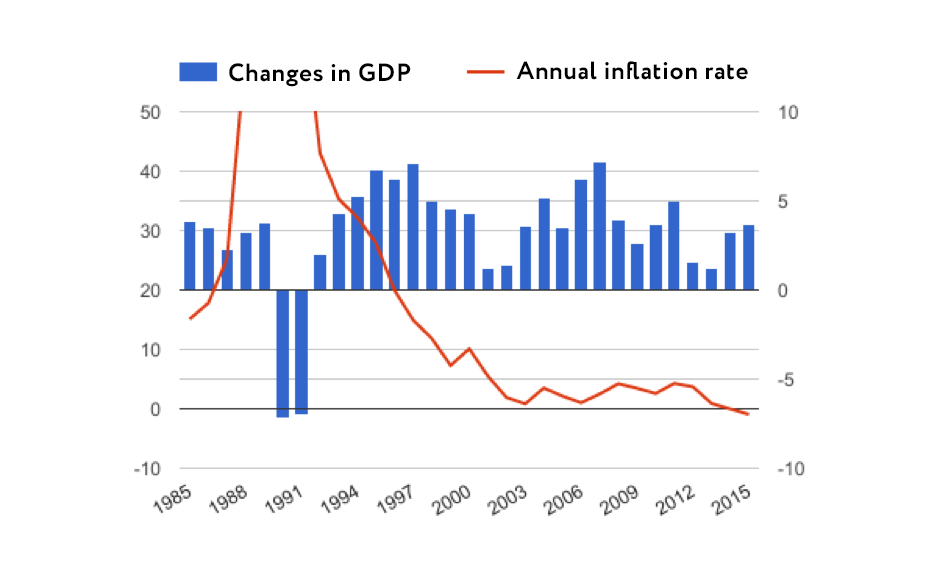 According to the latest available publication of the Central Bank (January 2017), inflation forecast from the NBU is 9.1% (while the target is 8%), and the bank doesn’t intend to pursue tighter policy to reduce the forecast value.

Lyashko writes that the current “monetary policy of the National Bank “dries out” Ukrainian economy, making it a financial desert. “Financial depth” of the economy (the debt-to-GDP ratio) fell by one and a half — from 74% to 49%.”

However, causes of the fall of the debt-to-GDP ratio are the following:

Moreover, this figure doesn’t take into account the quality of the loan portfolio. Loans to inefficient firms will lead to a technical increase of “financial depth”, but won’t benefit the economy. On the contrary, they can result in a banking crisis and affect depositors.

Ukraine doesn’t need a credit bubble, but creation of conditions for effective operation of the credit market. The most important conditions are a well-functioning judicial system and strengthening of protection of creditors’ rights, which will allow banks to be sure to obtain collateral in case of the debtor’s insolvency.