The Future of the Armed Forces of Ukraine: Contract Based or a Hybrid Model | VoxUkraine

The Future of the Armed Forces of Ukraine: Contract Based or a Hybrid Model

By using the example of Norway, I argue that a hybrid model, i.e. a combination of conscription based and contract based military bodies might be suitable for Ukraine. I analyze argument for and against conscription and give practical suggestions for reforming the army in Ukraine.

“The army should be immediately turned into a contract-based system”– wrote Arsen Avakov, the Minister of Internal Affairs of Ukraine, in Facebook. The question whether Armed Forces of Ukraine should completely abandon compulsory military service and adopt a contract based system has been present in the public debate for some years. In spring 2013 it was expected to make the last conscription campaign, yet the annexation of Crimea and the conflict in Donbas made the government to reinstate conscription.

One of the reasons why Avakov expressed support to abolishing the conscription is the unsatisfactory results of conscription campaigns, repeatedly reported abuse of power by military authorities and a common opinion of ineffectiveness of conscription based army.

The proponents of this opinion very often point out to the fact that the overwhelming majority of Western continues have abandoned enforced military service. Yet, contrary to this common opinion, there are countries in Europe such as Norway, Denmark or Finland, which keep conscription drafts. Norway has a system that combines professional military forces and conscription based bodies. For the simplicity purpose, I will call such system “a hybrid model”. This is the system that Ukraine has at the moment, since in the Armed Forces of Ukraine there are both conscripts and professional soldiers, i.e. soldiers who have signed a working contract with the military. Reforms of the military could be done without abolishing conscription and I believe there are good reasons for that.

Not an outdated system

Norway, a member of NATO, is one of the few European countries that keep compulsory conscription in use. Soldiers taking part in military operations abroad have to go through an additional year of training and sign a working contract. Telemark battalion, a unit that is mostly deployed in operations abroad, is an example of a battle group which consists of only professional soldiers who have previously been conscripted and then decided to stay in the army.

In 2014, Norway made conscription compulsory for women. Norwegian Minister of Defence Ine Eriksen Søreide supported this reform and emphasized that it will allow to choose the best and the most motivated from both genders, which in the end will increase the quality of the military. She also pointed out that conscription in necessary for army to be in touch with the society and that conscription is a central part of a social contract between a state and its citizens.

Norwegian Labor (Norw: “Arbeiderpartiet”) lawmaker Laila Gustavsen supported the bill and pointed out that while in principle unmotivated young people can be forcefully conscripted but in practice Norwegian armed forces became more selective in choosing conscripts, so “the armed forces recruit the most motivated young people.” This “weak model”, where in 2012 about 14 % called in were conscripted, has been also brought as an example in public debate in Sweden.

Henning Sørensen gives three ideal reasons for using conscripts (see the model below [1]). On the national level conscripts are used either with “the democratic purpose” i.e. improvement of civil-military relations by, for example, educating conscripts, informing them of important social

values ect., or with “the deterrence purpose”. Deterrence refers to the potential use of conscripts in defending the country against an external aggressor, while deployment abroad includes a variety of functions such as participation is international operations, peace corps etc. Below I show the relevance of two of these roles in Ukraine.

Conscription bridges the gap between military and civil citizens as it can create solidarity not only vertical (between military and civilians) but horizontal (between citizens who ever served in the army). For example, “in post-unification Germany, conscription is defended as a way to bring males from the eastern and the western part of the country together” [2]. In the Ukrainian case, where many talk about regional or/and linguistic division a well-organized military service can bridge these gaps and help to create solidarity among Ukrainian citizens.

Danish researchers Henrik J. Jørgensen and Henrik Ø. Breitenbauch agree that there is an important role of conscription in creating social cohesion. They emphasize that if conscription is to be abolished in Denmark, the government needs to focus on filling the gap of the function conscription performed by extra attention-creating activities towards the army [3].

2. Deterrence function of conscription in Ukraine:

The hybrid system allows keeping highly professional and motivated battalions for special operations and participation in military campaigns abroad (Norway), while conscription allows to mobilize big numbers of privates in a case of catastrophes or, more importantly, an external invasion. Finland, for example, has an army of 16,000 soldiers, but in the event of war the country can rely on 230,000 reserves. Yet recently Finnish authorities send out letters to 900,000 former conscripts with guidance in a case if their assistance is needed. Ukraine, which “has 130,000 personnel in its armed forces that could be boosted to about one million with reservists” can use the potential for mobilization as a preventive measure against possible aggression from abroad. Sørensen points out that “conscripts do not need to be well-educated in warfare, but they demonstrate the will and power of a nation to defend itself” [4], in other words a potential to summon a large number of conscripts is by itself a sign that can prevent a possible aggression.

There are many problems associated with conscription. Here I am going to briefly address two of them:

1) Argument from technology: modern warfare does not need massive personnel but advanced technology.

Answer: The hybrid model does not undermine the importance of technological advancement. Professional battalions can be equipped with the advanced warfare while conscripts can be trained in skills required for defence such as usage of firearms, first aid, logistics and military teamwork etc. The professional military units can be the core, while conscripts can do the supportive work that is taken over by the civil society (volunteers) at the moment.

Practical suggestion: Drones have been in use by both sides during the conflict in Donbas. Compulsory military training could train conscripts how to use and to counteract to drones. T. X. Hammes,, argues that drones have many advantages over expensive and technologically advanced warfare and therefore their usage in military operations will increase.

Answer: yet, to replace a hybrid model with purely contract-based military does not seem to be a way to save money. The graph below [5] shows that military expenditure in Slovakia and Latvia increased since the abolition of conscription (Denmark has mandatory service). 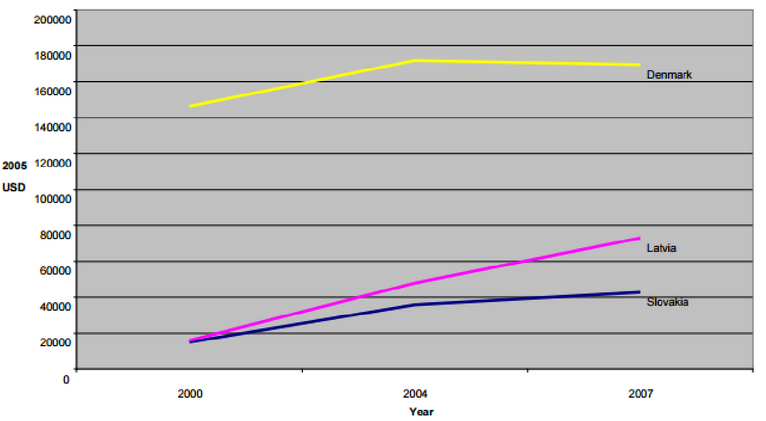 Jørgensen and Breitenbauch conclude that overall military costs have also increased since conscription was suspended [6].

Ukraine has UAH 40bn of defence budget at the moment where 20bn is wage bill. If a number of professional soldiers is to be increased then spendings on the wage bill will grow. Proponents of a professional army should keep in mind that such an army continues to cover the same services a conscription based army has, i.e. training, accommodation, living expenses and technical supply, but in addition has to pay wages to the soldiers. The only way to lower the overall expenses is, therefore, to reduce the number of human force. In the situation Ukraine experiences at the moment, the rationale of such a move should be carefully considered.

Another important question here is whether Ukraine can keep a low spending profile even if conscription would be abolished. Before corruption in the society is tackled, it is naive to expect that a professional army would help to significantly reduce spending.

Practical suggestion: Conscription can be performed together with patriotic or volunteer organizations where the financial burden of training of conscripts can be shared between the state and NGOs, given that state keeps control over the process.

Norway gives an example of a country that keeps compulsory conscription together with contact based service, i.e. the hybrid model. Problems of Ukrainian army are not problems of the hybrid model, but problems of efficiency and transparency. Thus, in order to improve the quality of the Armed Forces, the reforms should be conducted not in the direction of abolishing conscription, but in increase of the performance of the system that currently takes place. For example, the improvement of the administrative efficiency can be done by cuts in administrative personnel, firing employees suspected in corruption and hiring new personnel through an open competition (Police reform in Ukraine can be taken as an example). It is also necessary to create modern and efficient training program for conscripts that would be updated to the conditions of contemporary warfare. The effort of reforming the military should rather concentrate on fixing existing system rather than creating a new one.

The winner of MindSketch August Competition