Import Substitution is Not an Optimal Policy Solution for Ukraine

This essay is an answer to the VoxUkraine call for debates – the Mindsketch participants were offered a few statements for discussion. Iryna Bogdanova discusses the statement:

“The government should stimulate import substitution – for example, by introducing import duties on products analogous to those produced within a country or by buying durables from domestic producers and leasing them to consumers.”

The discussion of the necessity to implement an import substitution policy implies a more fundamental discussion about the government involvement in the functioning of a country’s economy.

The import substitution policy is a conventional instrument of protectionism, and its usage is strongly opposed by the adherents of economic liberalism. Before the era of global trade liberalization, most of the developed countries put in place import substitution policies as an instrument of governmental policy. Based on this historical fact, Cambridge professor Ha-Joon Chang developed his “Kicking Away the Ladder” argument [1]. Even today, economists have no unanimity on whether developing countries and emerging economies can gain from trade liberalization and develop competitive domestic industries without any recourse to protectionist instruments (e.g. high import tariffs or subsidies to domestic producers).

This essay briefly examines the benefits and drawbacks of import substitution with a special focus on the current situation in Ukraine. Moreover, as the author argues that such policy would be inefficient and its possible alternatives are discussed.

Pros and cons of import substitution

In order to justify such policy, governments may bring up two main arguments: an infant industry argument and the necessity to preserve existing jobs. The rationale behind the infant industry argument is that new industries cannot compete with the existing foreign producers and therefore would need support from the government to become more competitive. From the policymakers perspective, the import substitution policy supports domestic industries and preserves existing level of employment.

Even if such approach can be justified, the government has to decide which industries can benefit from the import substitution policy and for what period of time. Here may arise the issue of the so-called “rent seeking”, when, as a result of lobbying, allocation of public resources is not efficient and is beneficial only for certain interest groups. Taking into consideration that economy and politics are strongly interrelated in Ukraine, there is a high risk that the benefits from import substitution will be accrued by industries that do not have potential to become Ukraine’s breadwinners. For instance, in April 2013 Ukrainian government made an attempt to support domestic automobile industry and put in place safeguard measure in a form of a special duty (either 6.46 or 12.95% depending on the car’s engine volume). The measure as such did not improve substantially industry’s performance.

At the same time, Japan challenged the measure at the World Trade Organization (WTO) and the Panel, established under the WTO rules, recognized the measure as inconsistent with the WTO law. Consequently, Ukraine withdrew the safeguard measure at question.

Ukraine is a member of the World Trade Organization (WTO) and any aggressive import substitution policy could provide a legal ground to initiate a dispute against Ukraine [2]. Consequently, the Ukrainian government could be urged to solve the issue through consultations, or if these fail, to face a dispute with other WTO member(s), paying additional legal fees for external advice.

Ukraine as a country has limited financial resources, and the purchasing power of population is low, so it is unclear why should Ukrainian citizens be deprived of an opportunity to buy cheap imported products and be better-off.

What are the possible alternatives to the import substitution policy?

The import substitution policy is not a panacea for Ukrainian producers and, as discussed earlier, it imposes losses on consumers.

The modern world is more complex than a few decades ago and therefore, policy responses shall be updated. The recent decade can be characterized by the growing value of trade in services and the proliferation of global value chains. Consequently, the mere production of both industrial and non-industrial products would not generate substantial revenues for a country in the long run [3]. Therefore, trade policy of many developed and developing countries is focused on the competitiveness of domestic services providers and involvement of domestic firms in the global and regional value chains. Nowadays, the growing tendency to “outsource” or to “offshore” production and services is an issue of special concern and public debate in many countries.

In my opinion, Ukraine would benefit from cheaper imports by abstaining to adopt an import substitution policy, and should instead focus on developing a services-oriented economy. This would allow Ukraine to provide competitive services for domestic industries so that they can integrate them into their production processes thus increasing efficiency. For instance, such services can include IT solutions for businesses, financial and insurance services at reasonable prices.

With the right policies, Ukraine would be able to also export services at competitive prices. Currently, Ukraine’s export is commodity-based, as commodities account for two-thirds of the country’s merchandise exports [4]. However, as it was recently declared by the Trade representative of Ukraine, Nataliya Mykolska, export of services is one of the priorities for Ukraine [5]. Therefore, the development of an efficient services sector is vital.

The graph below shows that the export of services from Ukraine increased significantly starting from 2000.

Graph 1. Export of services from Ukraine 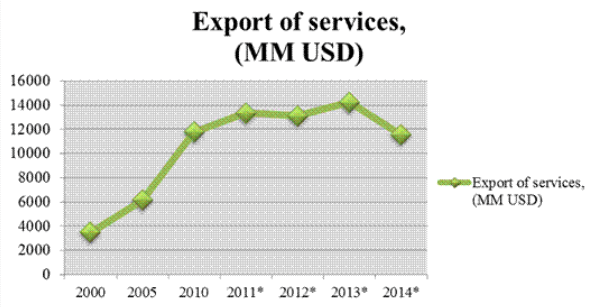 Based on the data provided by the State Statistics Service of Ukraine. *Data for this period have been taken without the Crimea

For a short and middle-term perspective the following services sectors can be prioritized: transportation services, outsourced/offshored services (e.g. back offices, call centers), information and technology (IT) services, and educational services.

Due to its geopolitical location and access to the sea, Ukraine can be a transportation hub between Europe, Russia and Central Asia. One of the priorities for the current government is to reform Ukraine’s state-owned rail monopoly, Ukrzaliznytsia [6]. Moreover, it is expected that in the nearest future regional authorities will be in charge of the management of regional roads and not a state agency, Ukravtodor [7]. Hopefully, these changes will improve the current state of affairs.

During the past decades, both “outsourcing” and “offshoring” of services increased significantly and it is expected that this process will continue in the future [8]. “Outsourcing” occurs when a company contracts a specific process out to a third party and “offshoring” is a process of reallocating a part of the process/business to another country. If the Ukrainian services sector offers competitive services for a reasonable price, the country can benefit from “outsourcing”. If the regulatory environment improves, Ukraine could become an “offshoring” destination.

Despite the current crisis in Ukraine, its IT industry is booming [9]. The biggest challenge for this sector is the current Ukrainian business environment. A transparent tax system and a decreased number of inspections carried out by the governmental authorities could be reassuring measures for the IT industry.

The export of educational services could be complex and would require substantial efforts to bring results into Ukraine. If the necessary educational reform takes place and Ukrainian higher education institutions offer larger numbers of disciplines taught in English, there is a potential for certain Ukrainian universities to become educational hubs in the region. Ukraine has strong technical universities such as National Technical University of Ukraine “Kyiv Polytechnic Institute”, Kharkiv National University of Radioelectronics, Lviv Polytechnic National University, and Odessa National Polytechnic University. Moreover, after the recent depreciation of the national currency, the tuition fee can be appealing for foreign students.

The import substitution policy is not an optimal policy solution. Such policy entails welfare losses for consumers and is not sustainable in the long run. A shift to a service-based economy can be possible alternative to import substitution.

[1] The main idea behind this argument is “The history shows that developed countries used tariff protection and subsidies to develop their own industries and now developed countries advice or sometimes even force developing countries to liberalize trade, enforce intellectual property rights and establish institutions. Although most of the developed countries used protectionism to develop their own industries and now these countries are “kick away the ladder” that allowed them to become successful”. Ha-Joon Chang, Kicking Away the Ladder: How the Economic and Intellectual Histories of Capitalism Have Been Re-Written to Justify Neo-Liberal Capitalism. (Cambridge University, UK), 2002, accessed at http://www.paecon.net/PAEtexts/Chang1.htm

[2] As all other WTO members, Ukraine has certain commitments regarding import duties that can be imposed on different groups of goods and commitments to use only certain subsidies to support domestic industry.

[3] Economists estimated that manufacturing costs constitute only a tiny fraction of the final price, while services amount to two-thirds or four-fifths of the total value of the product. Rentzhog, Magnus and Emilie Anér. The New Services Era – Is GATTS up to the Task? E15Initiative. Geneva: International Centre for Trade and Sustainable Development (ICTSD) and World Economic Forum, 2014. www.e15initiative.org/

[4] Ukraine’s Top – 100 State-Owned Enterprises, publication prepared by the Ministry of Economic Development and Trade of Ukraine with the financial support of the UK Government (DFID) as part of “UK-UA: Reform Assistance” program, page 32.

[5] Ministry will give special attention to exploiting advantages of free trade with the EU and export of services – Trade representative of Ukraine Nataliya Mykol’ska.

[6] Ukraine’s Top – 100 State-Owned Enterprises, publication prepared by the Ministry of Economic Development and Trade of Ukraine with the financial support of the UK Government (DFID) as part of “UK-UA: Reform Assistance” program, page 74

[9] Greg Satell, Could Ukraine Be The Next Silicon Valley?

2. Greg Satell, Could Ukraine Be The Next Silicon Valley?

3. Ha-Joon Chang, Kicking Away the Ladder: How the Economic and Intellectual Histories of Capitalism Have Been Re-Written to Justify Neo-Liberal Capitalism (Cambridge University, UK), 2002

4. Ministry will give special attention to exploiting advantages of free trade with the EU and export of services – Trade representative of Ukraine Nataliya Mykol’ska.

5. Rentzhog, Magnus and Emilie Anér. The New Services Era – Is GATTS up to the Task? E15Initiative. Geneva: International Centre for Trade and Sustainable Development (ICTSD) and World Economic Forum, 2014. www.e15initiative.org/

6. Ukraine’s Top – 100 State-Owned Enterprises, publication prepared by the Ministry of Economic Development and Trade of Ukraine with the financial support of the UK Government (DFID) as part of “UK-UA: Reform Assistance” program