The last colonial war in Europe or why Ukraine cannot surrender

The last colonial war in Europe or why Ukraine cannot surrender

Ukraine is fighting the last anti-colonial war in Europe. If it loses, it will cease to exist and the law of the jungle will be a new global order. Thus, Ukrainians have no choice but to fight. And the world, if it wants to restore a rules-based global order, should help Ukraine win.

Military experts speculated that the Russian army was going to roll over Ukraine in 48 hours. It has been more than three weeks and counting since the start of the Russian invasion. Ukraine proved the experts wrong. In desperate attempts to break the will of Ukraine, the Russian armed forces are committing unspeakable atrocities against civilians, children, and pregnant women. Mauripol, a Russian-speaking city in the South East of Ukraine, was reduced to rubble by the Russian bombardment but the city has not surrendered. Many people wonder how Ukraine can get so much determination and courage to continue the battle and why Ukrainians won’t “just surrender.”

This is a question of life and death. If Russia wins, Ukrainians will lose home and freedom. The history of Ukraine is a grim reminder that there cannot be peace on Russian terms, unless it’s an unconditional surrender. If there is no “middle ground,” then only extreme options are possible. In the words of Golda Meir, who was born in Kyiv, “Between life and death, I don’t know of a compromise.”

Indeed, Russia has been an existential threat to Ukraine for ages. It all started after 1654, following the National Liberation led by Bohdan Khmelnystsky against Poland, when Ukraine turned to a Moscow tsar for help and was offered “security assurances” (as useless as those received in 1994). Moscow didn’t wait too long to renege on the promises, which ended in the Muscovite-Ukrainian War (1658–1659). Moscow forces besieged a strategically important city of Konotop with about 70 thousand soldiers, but were defeated by a coalition of Ukrainian cossacks and Crimean Tatars. The Moscow Tsar “came out in mourning clothes to the people.” Years of love-hate relationships in the region ensued. In 1709, the joint forces of Ukraine and Sweden suffered a bitter defeat from Russian forces in the Battle of Poltava, and things went downhill from then on.

There is “no nation without a language,” as the Irish know too well. The history of suppression of Ukrainian language and culture is a long-running show, featuring Peter I who banned printing in Ukrainian in 1720; Catherine “The Great” II who prohibited teaching in Ukrainian in the Kyiv-Mohyla Academy, the oldest university in the country, in 1763; a home office secretary Valuev who declared in 1863 that “there was not, is not and could not have been a separate Little Russian [Ukrainian] language”; and a special “guest star” Alexander II who dealt a final blow by signing the Ems Ukaz of 1876, which banned publication of all books and song lyrics in “Little Russian,” as well as public lectures, plays, and song performances in Ukrainian.

Ukrainians also suffered from serfdom in Russia. As part of the systematic effort of the Moscow Tsardom, and then Russian empire, to subdue Ukraine, the Russians had been slowly but steadily introducing serfdom (slavery) in Ukraine, which was formalized by Catherine II in 1783. Peasants could not leave their lands without a permission of a local landowner. Serfdom was abolished in 1861, the same year slavery was abolished in the U.S., but it left enormous scars on Ukrainian society.

Taras Shevchenko, a founding father of modern Ukrainian literature and a father of the nation, embodies the tragedy of the Ukrainian people. He was born a serf. Because he was a gifted artist, it took a small fortune to buy out his freedom. When members of a movement to democratize the Russian empire were turned in, Shevchenko among them, he was sent into exile as a private to the Russian military garrison in what is now Kazakhstan. Tsar Nicholas I personally confirmed his sentence and added to it, “Under the strictest surveillance, without the right to write or paint.” Shevcheko died a few days before the emancipation of 1861 was announced. 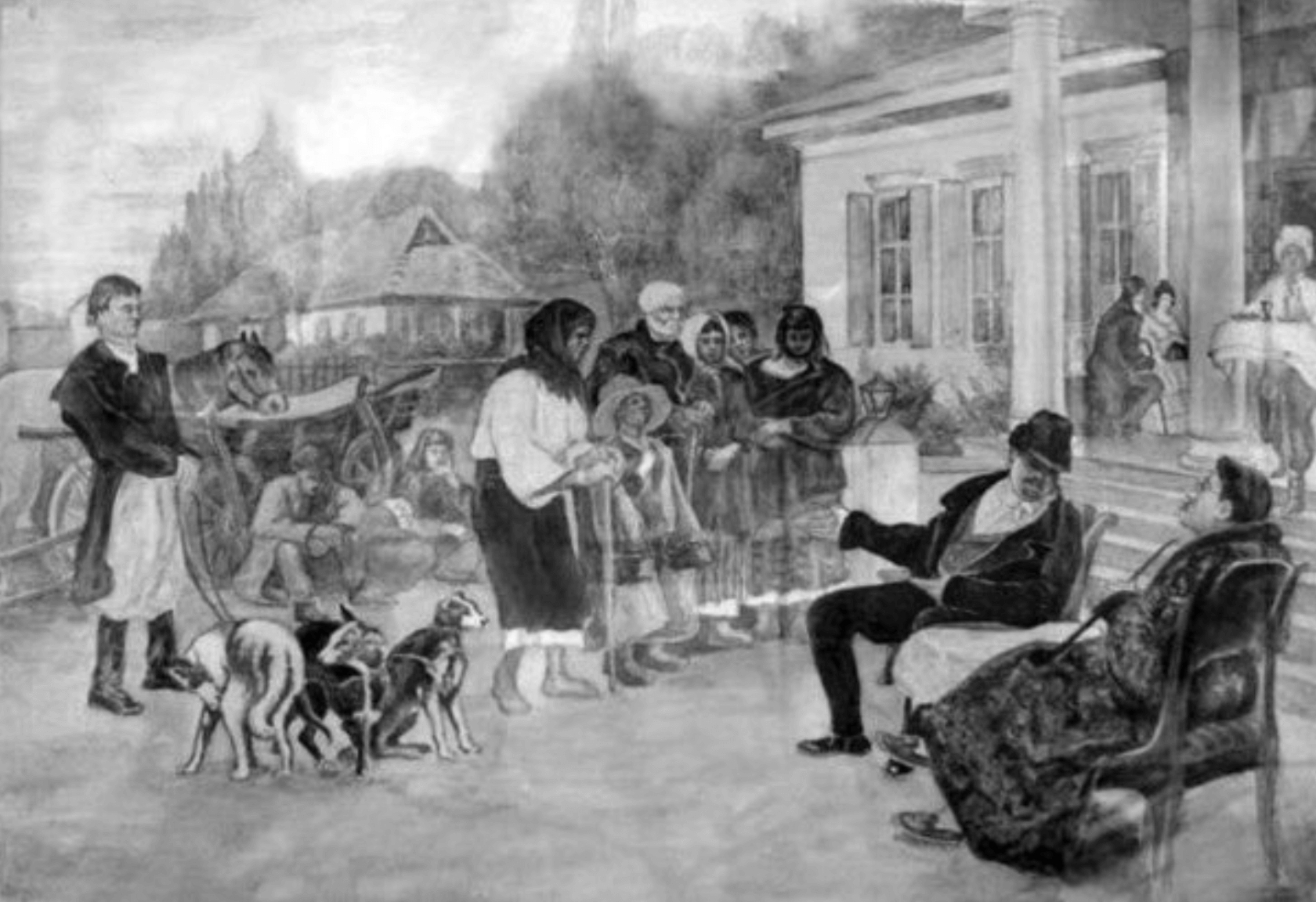 In spite of centuries of oppression, Ukraine gained independence in 1918 only to lose it in a bloodshed bellum omnium contra omnes several years afterwards. The Soviet empire followed the Russian empire in denying Ukrainians their language, their culture, their freedom. A brief revival of Ukrainian culture and Ukrainization in the 1920s and early 1930s was a cunning plan to lull those Ukrainians who shared communist ideals but understandably wanted to preserve their culture.

The spirit of those times was expressed by an outstanding avant garde writer Mykola Khvylovy who put forward a slogan, “Away from Moscow!” Stalin decided to crack down on anything that could pose any threat to his craving for absolute power, with Ukrainians maintaining arguably the biggest sense of national identity. The infamous famine of 1932–1933 (Holodomor, or death by starvation, recognized by many as an act of genocide) took millions of lives of Ukrainian peasants who refused to participate in social experiments directed from Moscow. The Great Purge of 1937 took the lives of hundreds of thousands of people including most prominent Ukrainian writers and artists, who became collectively known as the Executed Renaissance. In the aftermath of the World War II, the Soviet security forces deported peoples of Ukraine (Crimean Tatars, Ukrainains, and others) to distant lands as an act of punishment for alleged collaboration with the Nazis and similar dreamed-up crimes.

Fast forward 400 years of derision and disdain towards Ukrainians. After the “greatest geopolitical tragedy of the 20th century,” as one amateur historian quipped about the demise of the evil empire in 1991, the Russian establishment have consistently loathed Ukraine’s existence, denied it its own language and history, and have been taking every effort to undermine Ukraine as a sovereign state.

This brief historical excursion cannot give the full account of oppression, but we hope that it gives a clear perspective on why Ukrainians give everything they have in this war: Russia is fighting an aggressive colonial war, Ukraine is fighting for its freedom and existence.

The destiny of Ukraine and much of the world is in the balance now. If Ukraine falls, the cancer of war will spread to the rest of the world (Putin’s henchmen have already threatened to invade Poland and the Baltic states) and the law of the jungle will be a new global order where a big country can take over a small country. If Ukraine defeats the Russian aggression, another Berlin wall will fall and there will be another spring on the remnants of the Soviet empire that call themselves Russian Federation.