Ukrzaliznytsia’s New Tariff Policy: How to Find a Balance with the National Economy

One of the most controversial tariff innovations which the rail transport market (or rather monopoly) expects is the abolition of “discriminatory” tariffs by type of goods (tariff determined for each cargo separately), and the transition to a fee for use of infrastructure (price depends on the weight and distance). These generally positive European practices can significantly reduce railway traffic in Ukraine and deepen the stagnation of the Ukrainian economy.

No doubt the current practice of setting railway tariffs in Ukraine (when tariff growth is set administratively and directly depends on the political influence of a minister and his relationships with financial-industrial groups) is absolutely wrong and should sink into oblivion. Tariff increases were carried out twice during the last 12 months (on 23rd of July 2014 by 12.5%, and on 31st of January 2015 by 30%). A third increase of tariffs on April 1, 2015 by another 25% was not approved, but the Ministry of Infrastructure and Ukrzaliznytsia (UZ) emphasize that this decision is only a matter of time.

In fact, no one is denying the need to raise rates, but the procedure should be transparent, understandable and be applicable for prediction of such growth in the future. Actually, the main task of this post is to transfer debates on tariffs of one of the most powerful monopolies from the political sphere (anti / pro oligarchic, European / Soviet model, etc.) to constructive professional dialogue.

Principles and railway tariff models in the world

Assuming tha tthe wagon component of tariff for cargo owner will be determined by the market and by the competition between rolling stock owners, the world practice of tariff regulation of access to railway infrastructure suggests two basic approaches that can be described as competitive and cost-based.

1) Competitive approach is based on the principle that the main factor should be a competitive position of the railway, but not the cost of its operation. It is most common in the world.

That is, tariffs should be set at the highest level allowed by the market, given the prices set by actual or potential competitors, except in special circumstances (such as the need for transportation of socially important goods, which have no alternative means of transportation etc.). With such an approach the tariff must at least cover the minimum variable costs of long term period for certain traffic.

This principle of pricing on railways was formulated in 1927 by mathematician Frank Ramsey. In summary, it goes like this: the railway should set up its margin to variable costs in the long run for individual clients in inverse proportion to their price elasticity of demand.

Thus, for customers with a low elasticity of demand (which have no alternative to rail, such as coal mining companies, iron companies, non-metallic carriers, etc.) railways should set a higher mark-up than for customers with high elasticity of demand (which can switch to another mode of transport, such as container operators, agricargo carriers, etc.). However, the railway must deeply understand how steady is the demand for its service, and soberly forecast the volume of traffic for different levels of tariffs, which is possible only understanding the features and marginality of customers’ business.

For example the British ORR (Office of Rail Regulation) establishes a special tariff for transportation of coal, and every time they need to review they provide a detailed analysis of the impact of tariff changes on the demand for rail transport from the generating companies. To do this, they hire consultants who model the market of electricity generation, forecast demand for electricity and estimate the competitive position of generating companies operating using coal, develop scenarios of market coal consumption and possible impact on the coal mining industry as well as on the individual consumer of electricity through the bill. All the above gives an understanding of the impact of rail tariffs growth not only on the financial results of railway company, but on the whole branch of the economy, employment in the country and the level of consumer prices.

2) The cost-based approach is an alternative to competitive one. Tariffs are calculated with the formula “average cost plus profit”, i.e. fixed and variable general costs are shared among all carriers. This scheme of tariff rates was used in the Soviet Union and is still used in the most post-Soviet countries.

The difficulty is that railroad generally tends to distribute all its costs, but ultimately, the decision on what costs attributed to consuming industries is made by the regulatory body. However, in practice, such an approach can lead (and usually leads) to decrease of demand in some segments of transportation, thereby reducing overall traffic volume and increasing the burden of fixed costs that are translated to the rest of the traffic by the next rates increase.

The current tariffication system of Ukrzaliznytsia

Current tariffs on UZ are regulated by Collection of Tariffs manual which was developed in the middle of the last century. Its main essence is different levels of tariffs for each of the three tariff classes depending on the level of processing and marginality of cargo. For oil and metals transportation one should pay a “high” rate, while to the “lower class” belong cargos with low margin – coal, gravel, ore, salt. Thus, tariffs increase for this low tariff class is the most painful – the transport component in the final price of these goods can reach 25-35% (e.g., limestone and crushed stone). 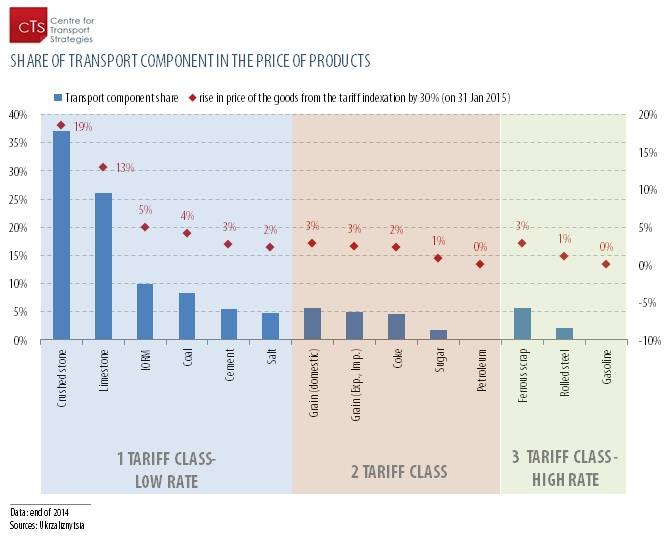 However, the main drawbacks of the current tariff system are that it is:

The draft Law on Rail Transport solves the majority of shortcomings of the current system. It is primarily to separate the infrastructure, investment, wagon and locomotive components from tariff.

UZ will be divided into carrier and operator of railway infrastructure, which will ensure equal access to the infrastructure for all carriers. Actually only infrastructure component of the tariff will be regulated, and will be determined by the National Commission for Transport Regulation (NCTR). It is expected that the tariff will be unified for all kinds of goods, and in the European manner will depend only on weight and distance of transportation. Despite the revolutionary nature and the importance of these changes, it is necessary to consider that blind application of European equalization of tariffs to all cargoes will lead to a significant drop in cargo flow and worsening problems in the Ukrainian economy. It would happen due to two factors: (1) special role of UZ in the transport system of Ukraine; (2) the monopoly role of UZ for a number of cargoes.

What Ukrzaliznytsia means for the economy of Ukraine?

Today UZ handles 2/3 of freight of Ukraine, or 82% excluding pipelines. This is a unique scale of the impact on the real economy by global standarts.

UZ in the Soviet planned economy was created and developed as an integral part of the industry, designed to serve the movement of raw materials and finished products domestically and for export. Focus on raw materials and industry of the Ukrainian economy since then has little changed, although the mining and metallurgical sector in terms of exports gradually caught up with agriculture. UZ is a unique company, which secures major industrial cargo flows, and is firmly integrated into the raw and export oriented model of the Ukrainian economy.

In such circumstances, the main challenge is to find a model of tariffication, which on the one hand would provide to UZ the necessary funding for the development, on the other – would save from the economic shocks that could significantly affect the stability of economic processes and export dynamics. 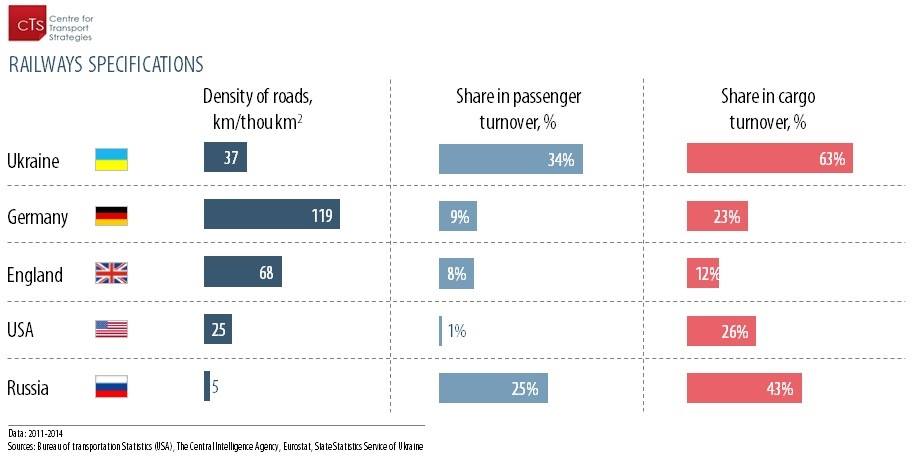 Industry (29% GDP) and agriculture (increased to 12.1% of GDP and apparently gradually increasing) provide about 60% of Ukrainian export (in 2014). And while the share of the rail transportation of agricultural cargos from elevator to port reaches 64%, metals & mining has no alternative to railway at all and its competitive position after the tariff revision will depend only on the capabilities of lowering margins.

Ukrzaliznytsia is a monopoly carrier for a number of industries.

Share of coal, iron ore and non-metallic products (crushed stone) in the structure of Ukrainian railways cargo flow reaches 55% or more than 215 mln tons. There is no rational alternative to railway in transportation of these cargoes. In fact, tariff increases for companies in these sectors has a form of hidden “transport tax” (they are not able to avoid it), and is often designed to offset the drop in cargo base of UZ. 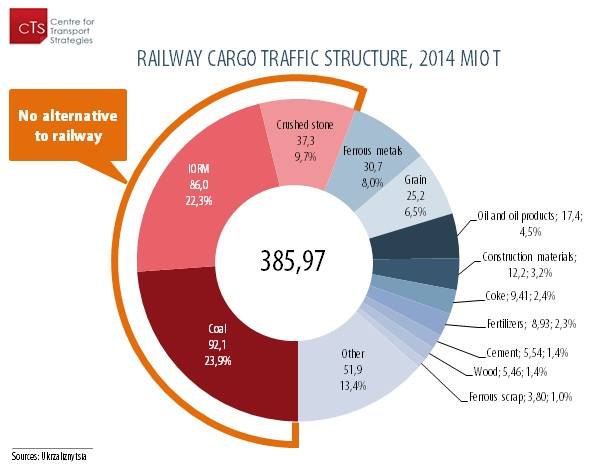 Revealing fact, that in the highly competitive with trucks segments (containers, cargo covered park, etc.) UZ has a tiny market share. For example, rail transportation of containers covers only ¼ of the market, accounting in the portfolio of UZ cargoes only for 0.56% (2014).

Even on the growing market UZ grows slower than competitors: traffic volumes of grain and oilseeds (perhaps the only type of cargo that is growing steadily in recent years) to the ports increased by 21% yoy in 2014 (up to 32 mln tons), while the railway delivery – only by 12%, i.e. the share of rail transportation of export to the ports fell from 70% to 64%.

Ukraine needs to move away from the Soviet practice of administrative tariffs revision, which is a hidden subsidizing of certain industries and monopoly abuse for others. In our opinion, a new approach to setting tariffs in Ukraine should be based on the following principles:

NCTR decision on raising of tariffs should be guided by clear logic, while its dynamics depend on the formula with determined basic drivers or benchmarks according to the world practice.

In some countries, this role belongs to consumer price indices (Australia and the UK), some countries index their railway tariffs according to the targeted levels of return on equity of railway company (Canada, USA, Japan). In any case, the principles and logic of indexing should be clear, stable and understandable for market players and customers, who would be able to predict the tariffs change based on the current dynamics of the “drivers”.

Tariffs growth should only take place after the calculation and analysis of the consequences of such action for major industries that are integrated with the rail. NCTR must be certain that the scale of a possible cargo flow drop caused by tariff increase will be insignificant and will not have substantial effects on the economic security of the country. In cases where there is a risk of social tension or energy security (as in the case of coal in the UK) NCTR has to develop special tariffs for the most “sensitive” cargoes and carefully monitor the weight of the transport component in these segments of the economy.

3) “Fair” Rate of Return for Ukrzaliznytsia

Considering that marginality of commodity business is unstable, NCTR should monitor market end prices and be able to raise rates during rise on commodity markets (i.e. periods of excess profits of export companies), or impose a moratorium on raising tariffs in periods of recession and crisis, when there is a risk of further drop of traffic as a result of “negative margin” of exporters, etc. Of course, it should not conflict with the first principle of predictability (for example, the formula of “high” tariff may be linked to international commodity price index, and tariff should be revised with some regularity defined in advance). For the adoption of this approach by the market UZ should clearly define investment directions of received “superprofits” that should go to support and development of infrastructure facilities, bottlenecks elimination, and so on. In general, the question of profitability of state monopoly is difficult and controversial that needs to find a healthy compromise between public and private interests in the industry.