Crimea Triangle: Where do Missing Trucks from Ukraine Go? | VoxUkraine

Crimea Triangle: Where do Missing Trucks from Ukraine Go?

To access economic effect of the Crimean blockade, one should have the data regarding the trade flows between mainland Ukraine, Russia, and the occupied peninsula. If there are no such data or the data quality is suspicious, one should use indirect ways to estimate the values. We employ the latter approach. Using data on inbound/outbound ferry traffic between Crimea and Russia, we show that there is a net outflow of trucks from Crimea to Russia (approximately 3000 trucks during Apr-Aug 2015) which is consistent with massive smuggling.

“Economic Blockade” initiated by Crimean Tatars is a major development after Russian annexation of the peninsula. Despite potential economic costs to Ukraine, the public seems to support the blockade. The main arguments for blockade are political, including “political pressure against Ukrainians and Crimean Tatars” and  “war with Russia”. Furthermore, the supporters of the latter argument claim that most truck drivers do not have Crimea as their final destination and so goods are further transported to Russia. Is this really true?

To answer this question, we examine data on ferry transportation officially published on the Sea Direction website. This source provides detailed statistics for 12-hour increments from 23 April 2015 to present. The data include the number of cars and trucks that were transported from and to Crimea, as well as the number of passengers.  Additional information includes names of ferry ships and the number of cars and trucks at waiting points: port Crimea, port Caucasus, port Slaviansk-on-Kuban, and port “Airport”.

Earlier this year VoxUkraine employed a subsample from the data and analyzed effects of sanction imposed by the U.S.  government on Crimean ports and Kerch Ferry company. This time we extend analysis by covering a larger time span (23.04.15-5.09.15; 136 days of available data) and making a more comprehensive effort to explore the data in detail.

We start our analysis by creating a “net outflow” measure for trucks, calculated as the difference between the number of trucks transported from Crimea and the number of trucks transported to Crimea. Now suppose that trucks crossings the de-facto border between Ukraine and Russian are destined for mainland Russia and these trucks later return to Ukraine via border check points in e.g. Kharkiv oblast to avoid unpredictable and costly crossing of the Kerch straits. In this case, we should observe a large positive value for our “net outflow” measure because trucks will tend to go only in one direction. On the other hand, if the ferry link really served as a connection between mainland Russia and Crimea, we should observe “net outflow” to be distributed closer to zero. 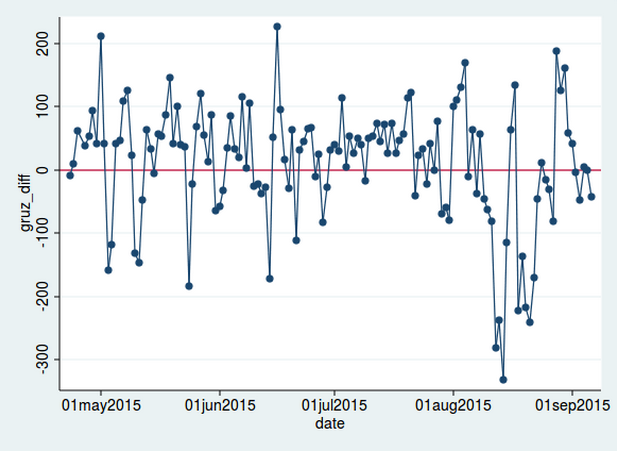 Figure 1 shows that during most days net outflow of lorries is positive, in the range of 50-100  trucks per day. For  86 days (63%), the number of trucks leaving Crimea is higher than the number of trucks coming to Crimea. Furthermore, the median value of “net outflow” is approximately 32 trucks. Given that the daily stream of trucks using the ferry service is about 250 trucks, one may conclude that at least 13 percent of shipments from Ukraine to Crimea went eventually to Russia.

Note that there is a sharp decline in “net outflow” between August 12 and August 14. During this short period, the number of trucks transported to Crimea was at the level of more than 400, while normally it is much smaller. Unfortunately, we do not know what those trucks were and what cargo they had. 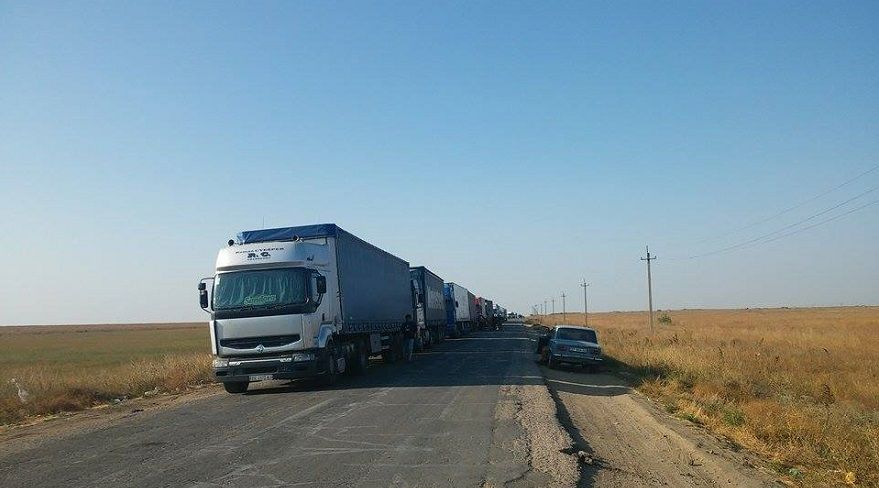 What was the scale of goods transported from Ukraine to Russia via the through Crimean peninsula? To get a rough idea, we calculate the cumulative sum for our “net outflow” measure and report it in Figure 2. Clearly, there is a constant growth to the level of about 3,000 trucks at the beginning of August. 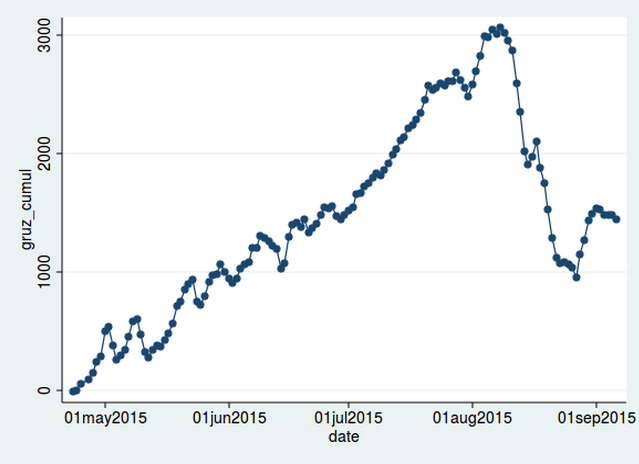 To assess whether these patterns are typical, we report outflow measures for cars (non-truck) and passengers that are much less likely to be engaged in a grand-scale smuggling. Figure 3 shows mostly negative values for the net outflow of cars and passengers which means that the number of cars/passengers coming to Crimea is higher than the number of cars/passengers leaving Crimea. There is also an increase in the ”net outflow” measure at the end of August which might be explained by Russian citizens returning home after vacations. Thus, in contrast to trucks, cars and passengers are flowing into Crimea, not out of it. In this sense, the behavior of truck data cannot be rationalized by normal flows and signals potential smuggling on a massive scale. Therefore, there is a likely custom-free tunnel allowed by Russian and Ukrainian officials.

It is difficult to blame truck drivers that are kept for days at the border between Crimea and the Kherson oblast. They all have families to support and they take risks by supplying goods into the country that is de-facto in war with Ukraine. However, the scale of the operation is immense. It is highly unlikely that this tsunami of trucks is spontaneous. This operation requires meticulous coordination at various levels. Whether the permission for this trade is tacit or explicit, motivated by profit or care for Ukrainian citizens in Crimea is an open question. But in any case the public should be aware of why this trade happens, who benefits from it, and how much it costs to mainland Ukraine.

Currently, Crimea is, according to Ukrainian law, a free economic zone. Therefore, goods supplied from Ukraine to occupied Crimea treated similarly to exports, chiefly in terms of VAT payments and refunds. Prices in Russia for majority of goods are higher than in Ukraine, and absence of double taxation makes the difference even larger and this difference is the reason behind ‘net outflow of tracks’. Consequently, Ukrainian MPs, several of which right now help to blockade the annexed peninsula should change the rules of trade between Ukraine and Crimea by suggesting new legislation that will tax the transported goods as they move to the occupied territory to make the trade less profitable.