Russian propaganda forms an alternative reality where each fact is biased and skewed.    Every day we monitor tens of Russian media and Telegram-channels and find out that Russian propagandists exhaust their phantasy: they produce the same narratives about denazification, accuse Ukrainian army in shelling civilians and civilian infrastructure, call into false “green corridors” and proliferate multiple provocations. Only the names of the cities change – methods of manipulations and lies remain the same.

These same methods Puting used in his latest speech. In this speech we found 12 mentions of the war in Ukraine. All of them sounded in the first 12 minutes of his speech. Every quote is a cynical lie. Thus Putin lies on average every minute.

This material is divided into three parts: “new lies”, where Puting lies about the was in Ukraine, “old new tales” where he repeats old manipulations and “bonus: uncovering the backstage” where we explain that Putin was not physically present at this meeting.

«The first thing is – protection of people who live in Donbas. How? By demilitarization and denazification of Ukraine, providing a neutral status to is. […] What is denazification? I talk to my Western colleagues – do you also have radicals? Yes, we do but not in governments. And everyone admits that there are»

«Our army does everything to protect civilians. Unfotunately these gangsters and neonazis don’t have any pity for people, they shoot even their own soldiers that don’t want to resist with arms».

«People…from today’s [Ukraine – editors] have to understand that if they continue to do what they are doing, they are putting at risk the future of Ukrainian statehood».

Photos from cities destroyed by russian occupants better than any words shows how “demilitarization” and “denazification” is performed by Russian methods and what “peace” and “future for Ukrainian statehood” Russian army brings.

As for the radicals in the government or the parliament – neither in current nor in the previous government there were any ministers related to “far-right” movements, and Ukrainian parliament since 2014 does not have parties that very loosely can be referred to as “right”.  Absence of specific names and the fact that Russia did not provide any proof that any of the government representatives belong to “radicals” one more time proves that this accusation is ungrounded. Thus, in the past they accused Arseniy Yatseniuk (prime-minister in 2014-2016) of participation in the war in Chechnya and even submitted a search claim for him to Interpol. However, Interpol recognized this claim as unjustified and canceled it. 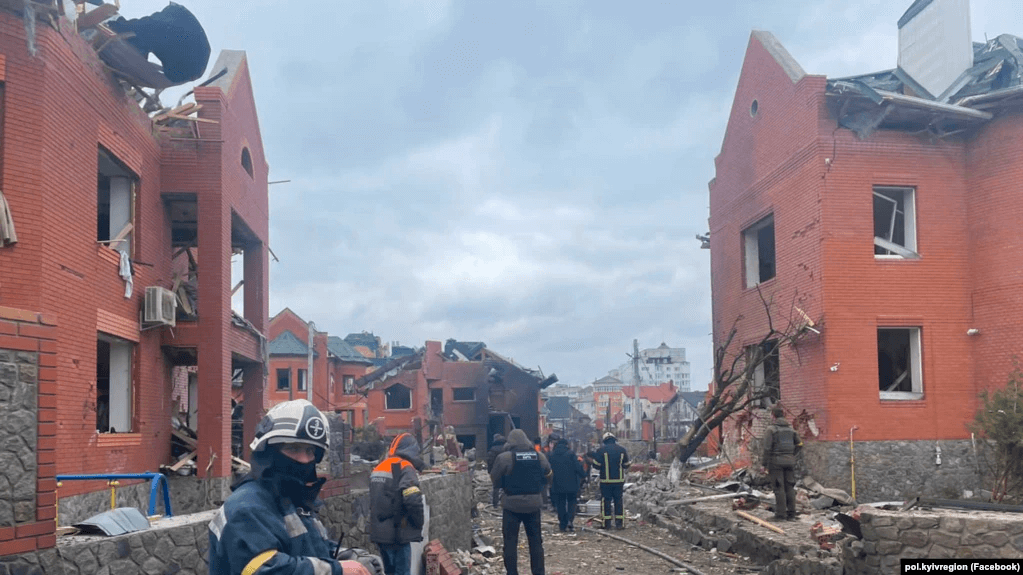 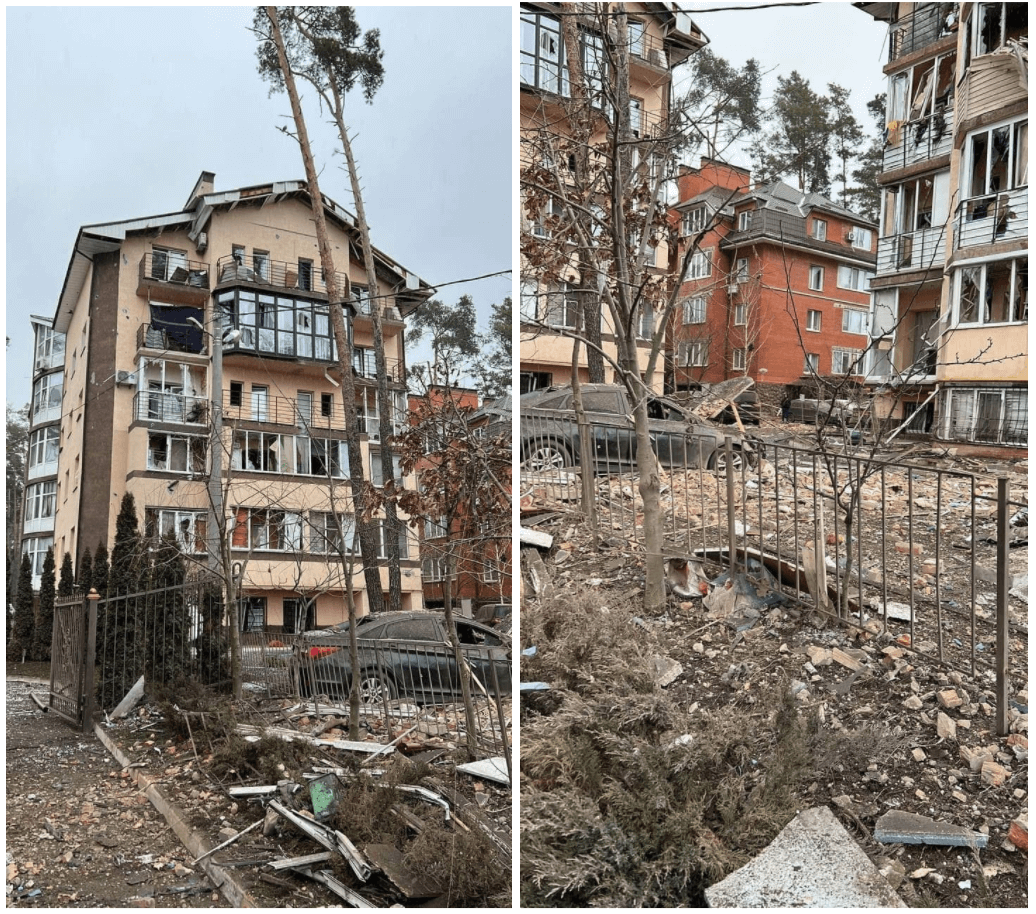 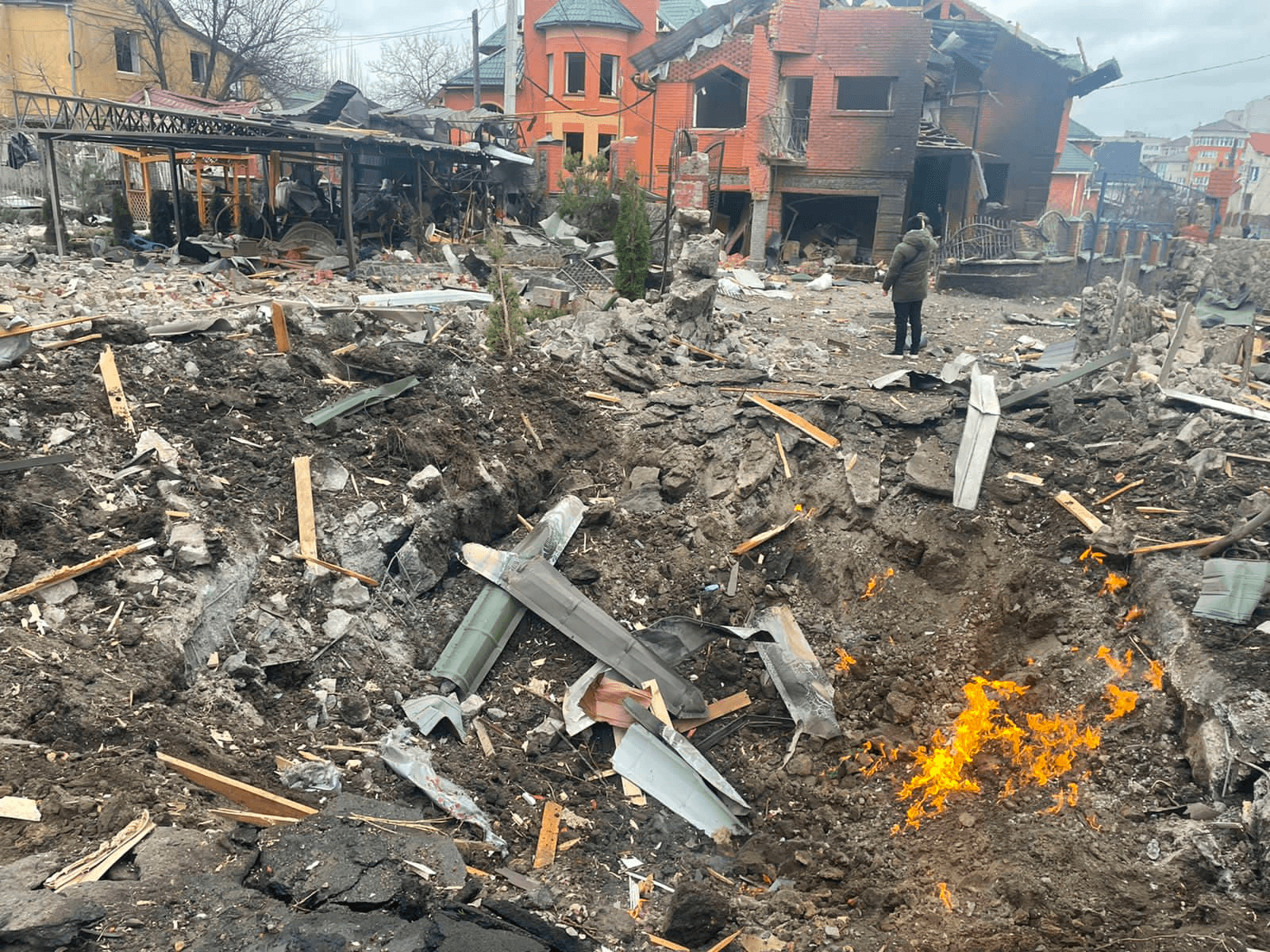 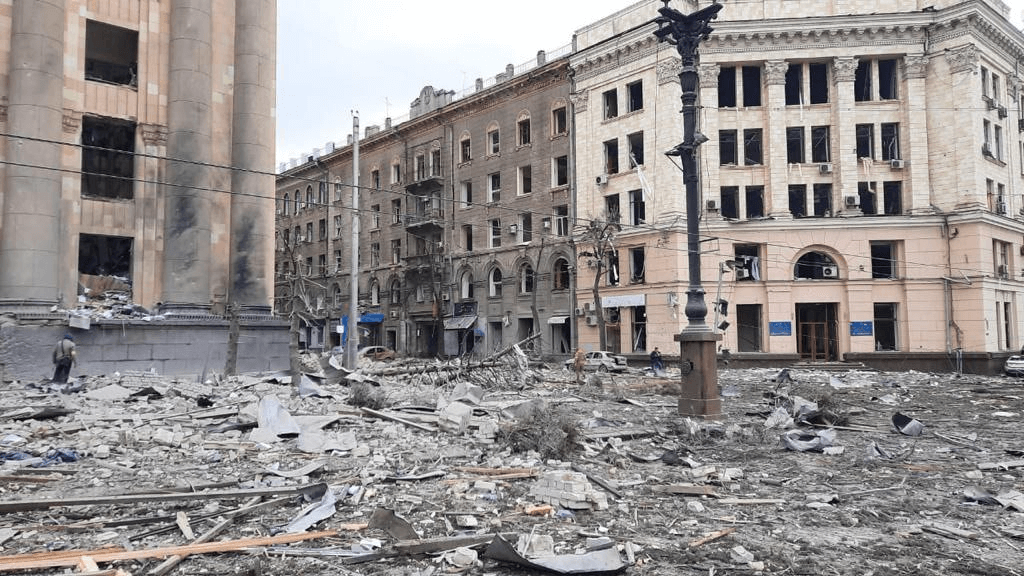 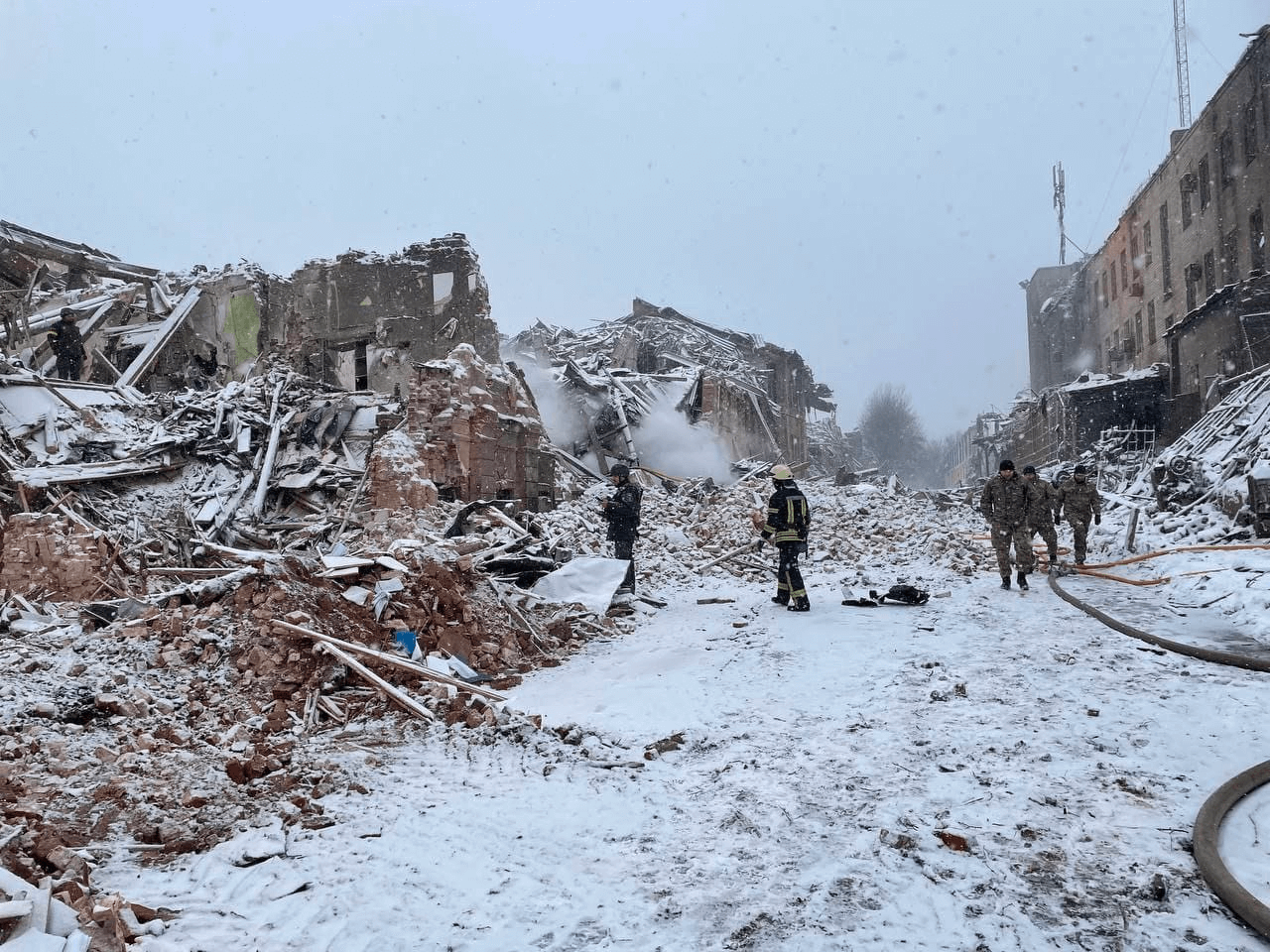 Kharkiv, photo of the National Guard 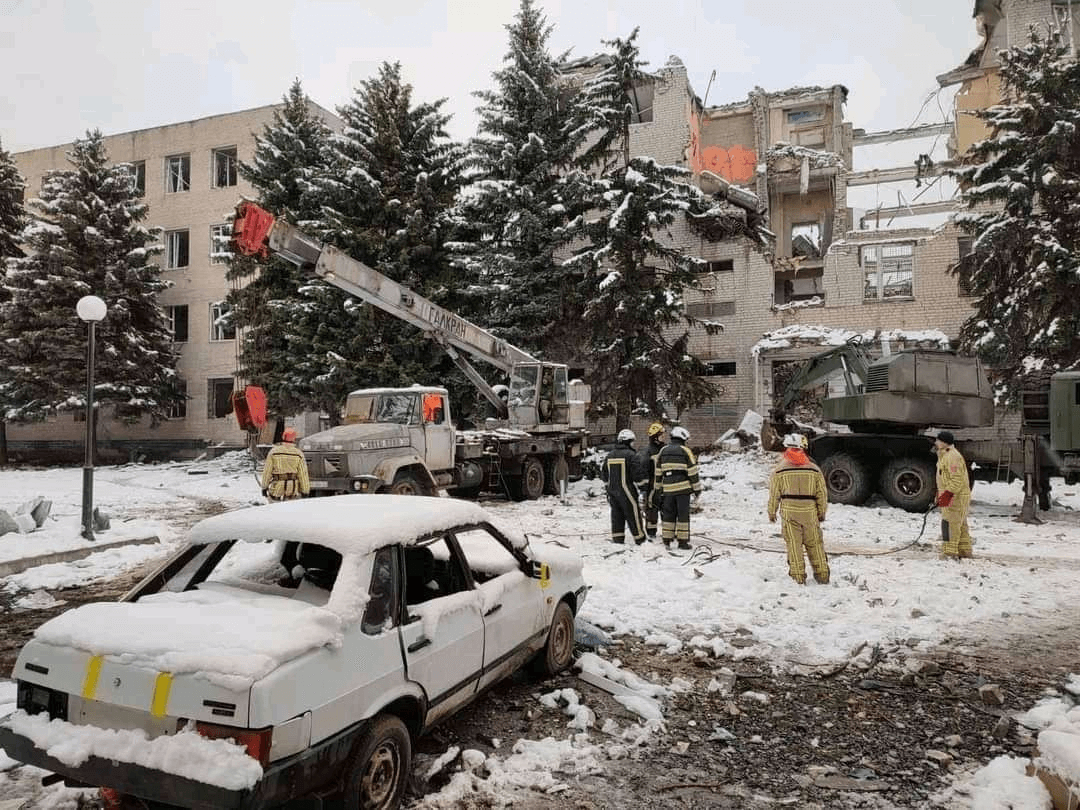 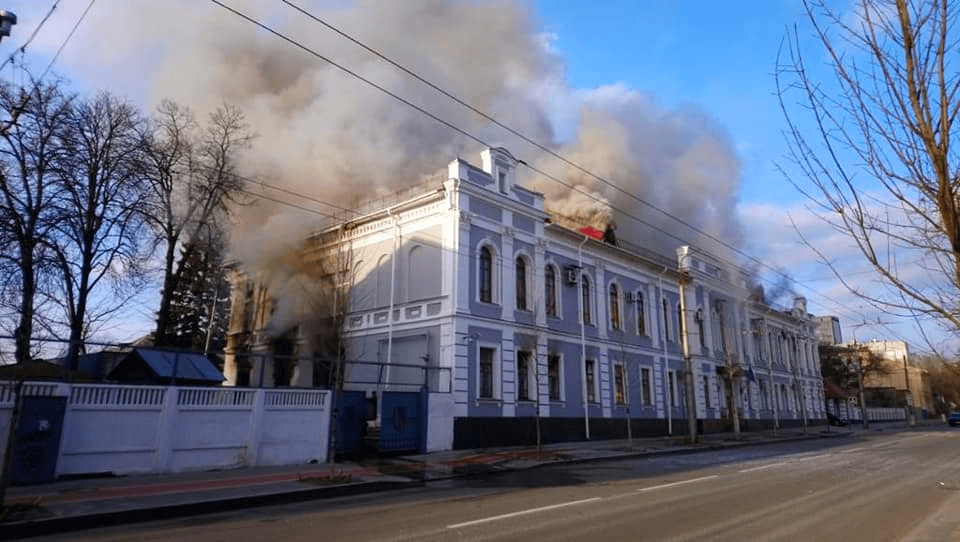 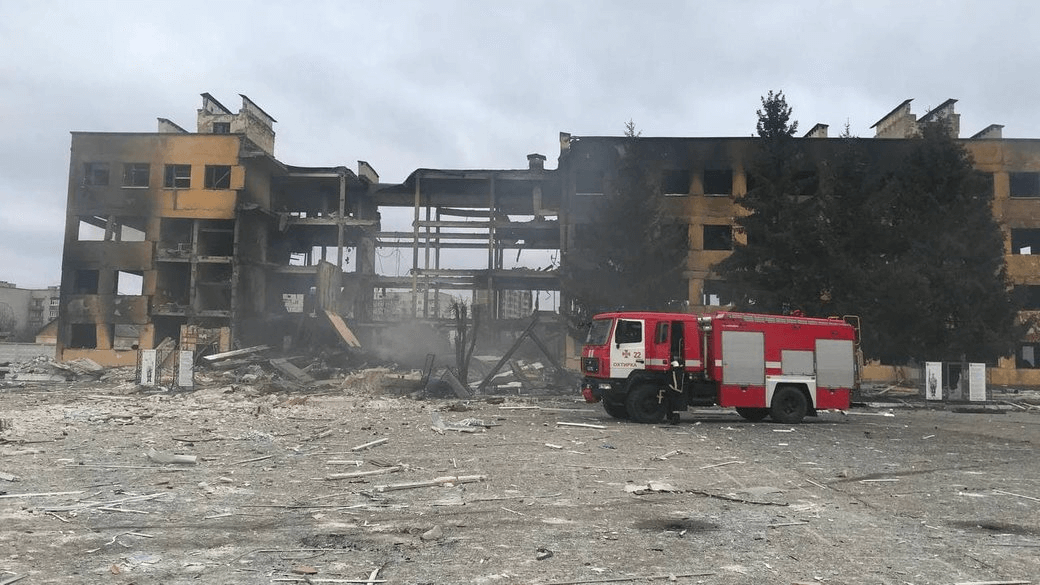 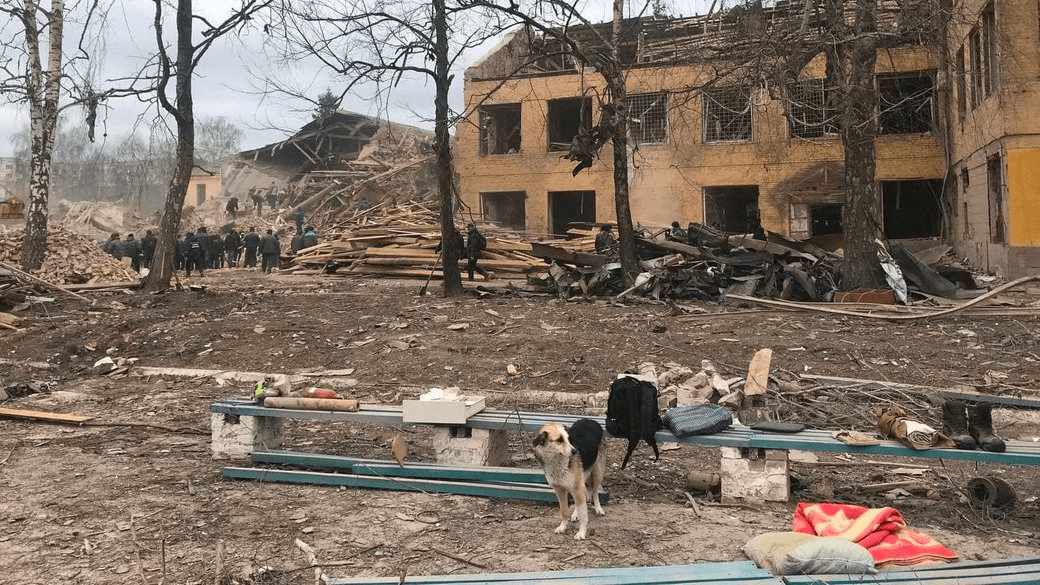 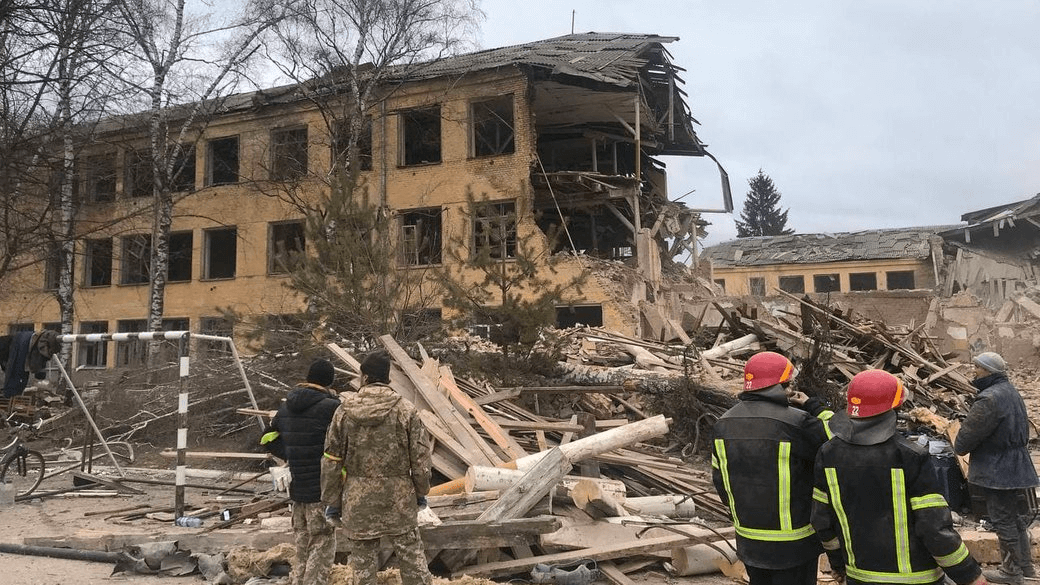 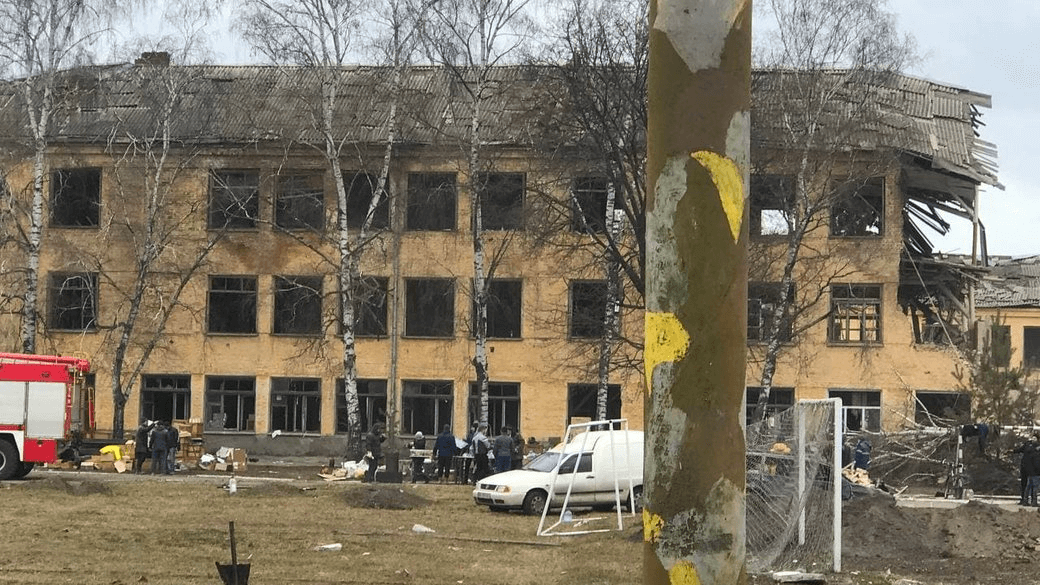 «Even worse attitude is to those people whom they [Ukrainian army] consider their citizens. They openly use people as live shields. For example in Mariupol […] We had a call from Kyiv government to our army – they asked to make corridors for exit of people. Yes, of course. Our army reacted immediately, halted the fight and watched what happened. They don’t let anyone out. They use people as a live shield. Who are they? Of course, neonazis»

Humanitarian corridor in Mariupol was disrupted by Russian occupants, and they first did it not in Donetsk oblast where the city is situated (and thus imaginary “neonazis” whould have to be) but further along the route – in Zaporizhzhya oblast.

The situation in Volnovakha city was the same.

This information comes from the head of Donetsk oblast administration, Ukrainian Ministry of Foreign Affairs and the Minister of Occupied Territories. Occupants broke ceasefire agreements making the situation dangerous.

«We are dealing not only with radicals – with neonazis. Our people can go out and express their views on what they like or don’t like in the actions of our government in Ukraine. But there in Ukraine those who express the same posistions as our representatives, as for example, our liberals – we already have proofs that they are just captured in the streets and shot.»

Now a few facts about “freedom of speech” in Russia:

Any facts of shooting people for expressing their position in Ukraine Puting of course does not provide.

«In this operation only professional military personnel participates: officers and soldiers that signed contracts. There are no draft soldiers and we don’t plan to send them there. I repeat, only men who voluntarily made a very responsible life choice – to protect their motherland – participate in this operation. They are implementing this task with honour».

Pentagon representatives said that the majority of Russian military in Ukraine are young drafted soldiers that are not well trained and are not prepared for a full-scale attack.  Conflict Intelligence analyst Kyrylo Mykhailov explained that in the war against Ukraine Russia used drafted young men born in 2000-2001 but some of them were forced to sign contracts.

Besides, there are videos of interrogations of Russian “professional” captured soldiers. Such videos were published by Valeriy Zaluzhniy, Ukrainian army commander in chief, and the Intelligence Unit of Ukrainian Ministry of Defense. Ukrainian Security Service (USS) published the video with the captured Russian Guard colonel who told that under the disguise of military exercise in Belarus the invasion into Ukraine was prepared. Besides, the USS published a video of one more captured occupant. He said that his commanders upon the order of the highest Russian leadership took phones and documents away from Russian soldiers, gave them food and water for three days and sent them to war with Ukraine.

«The first thing that we’ve done – we destroyed all the military infrastructure. Not all but partially. Mainly the warehouses with weapons and ammunition, aviation,  air defense systems. This work (on liquidation of air defense – editors) is practically completed».

Military infrastructure of Ukraine is not destroyed, moreover, Ukrainian army in some places counterattacks. For example, on March 4th in Mykolaiv oblast and on March 5th in Kharkiv oblast.

By the way, a similar fake Russian propaganda proliferated on the first day of war – February 24th.

All canceled fakes about the war in Ukraine you can find in the “VoxInforms” part of our web-site. The result of monitoring of Russian disinformation we publish several times a week in the material “Overview of Russian provocations and disinformation”.

«From 13 to 14 thousand people were killed during this time, more than 500 children killed or injured».

This is a usual thing for a politician – to take almost correct data but use them in the totally wrong context. Cynicism and manipulation of Putin is that all these losses are the result of the Russian aggression against Ukraine. Which of course he did not mention in his speech.

As reported by the High UN Commissioner on Human Rights, from April 14, 2014 to December 31st 2021 (the last available data) 14.2-14.4 thousand people died due to the war in Ukraine, of them 3.4 thousand civilians. Among the killed civilians there were 152 children. 81.4% of civilians were killed at the territory of so-called L/DPR, 16.3% in the government-controlled area and 2.3% – at the front line.

«After the anti-constitutional coup in Ukraine which, unfortunately, was intensively supported by Western countries. They are not hiding this. They openly said that they spent for this $5 billion. They were providing cookies in the Maidan etc.»

Putin is repeating himself: this statement he delivered at this State Security council, we already checked it.

The main features of a coup are that it is against the constitution, that it is violent, has a small number of organizers and participants, and its main goal is power grab. The Revolution of Dignity had none of these features.

About the lies of Putin’s minions read in the “Putin’s lies council. The analysis of Russian Security Council meeting”

«After that so-called Minsk agreement emerged or the list of measures that showed the way for peaceful resolution of this conflict. And we did everything possible to proceed along these lines and restore territorial integrity of Ukraine and protect the interests of people who live in those territories. What did they demand? The right to speak Russian, to live in these territories and with their culture. However, [Ukraine] organized the blockade of these territories, turned them off banking system, of food provision, of pensions and subsidies»

Putin again repeats himself and lies. This and other lies about the Minsk agreements we checked before.

A brief reminder. The majority of clauses of Minsk agreements Russia had not implemented extending the conflict. Russia blocked access to some rayons for OSCE observers and did not implement security clauses of Minsk agreements: ceasefire, complete withdrawal of Russian gunmen, Russian troops and weapons from the territory of Ukraine. For this, European sanctions on Russia were extended.

Ukraine tried to implement the security clauses of Minsk agreements that Russia violated. But political clauses of the agreement were against the interests of our country.

«Ukraine since the Soviet time has nuclear competencies, and as for enrichment of nuclear materials, they can organize this. Ukraine has missile competences, one Yuzhmash (a missile producing plant) is worth a lot, it created intercontinental ballistic missiles for the USSR. They can increase the capacity and produce [nuclear missiles]. And they will get help from across the ocean. And then they will say that we are not recognizing the nuclear status, Ukraine did this on its own, they will put these complexes under the control and since that very second the fate of Russia will be completely different…they will hold us in the nuclear gunsight. How can we let it go? These are absolutely real threats, they are not imaginary».

However, even if Ukraine refuses to implement the Budapest memorandum, it will not be able to renew its nuclear arsenal. Ukraine is a party to the Nuclear non-proliferation treaty, and if it violates it, we would encounter the fate of Iran – economic and political sanctions.

«There are ever more active discussions of Ukraine accession to NATO. […] No one recognizes that Crimea is ours, except for us. They implement military operations in Donbas, then they will go to Crimea. And then we will be at war with NATO».

A “referendum” in Crimea and Sevastopol is an absolute fake which we described in detail in the article “Russian occupation fakes in Crimea”. Not only Ukraine insists that Crimea is our territory. No country in the world except for Russia and its satellites recognized that Crimea is Russian.

At the same time, Ukraine-NATO partnership does not foresee NATO commitment to be involved in war. NATO Secretary General Jens Stoltenberg said that the Alliance will concentrate on provision of support but will not place its troops in Ukraine.

There are reasons to believe that the video was made on a so-called “green screen”, i.e. in reality Putin was not in the same room with women. Producers of this video tried to create the same light in the room with women and in Putin’s bunker but they did not always succeed. In some places one can see a green halo on the jacket. But the main proof that Putin was added to video is blurring: in order to very precisely cut a person out of the green screen, the original picture should not be blurred in any place. On the video one can see that he was added at the post-production stage. In reality motion blurring has rounded forms, and Putin has linear blurring. The kettle near Putin is real but it migrates from cadre to cadre. His hand is in front of the microphone at the general view but in all other views the microphone is situated directly in front of Putin.