The index for monitoring of reforms (iMoRe) remains at +0.6 points on a scale of  -5.0 to +5.0 for the second round in a row. Positive developments were recorded in the spheres of governance, monetary sector and public finance. No progress was observed in reforming the business environment and the energy sector.

Among the major events that occurred during this round is a law on the autonomy of medical institutions and the simplification of banks’ capitalization and restructuring procedures. 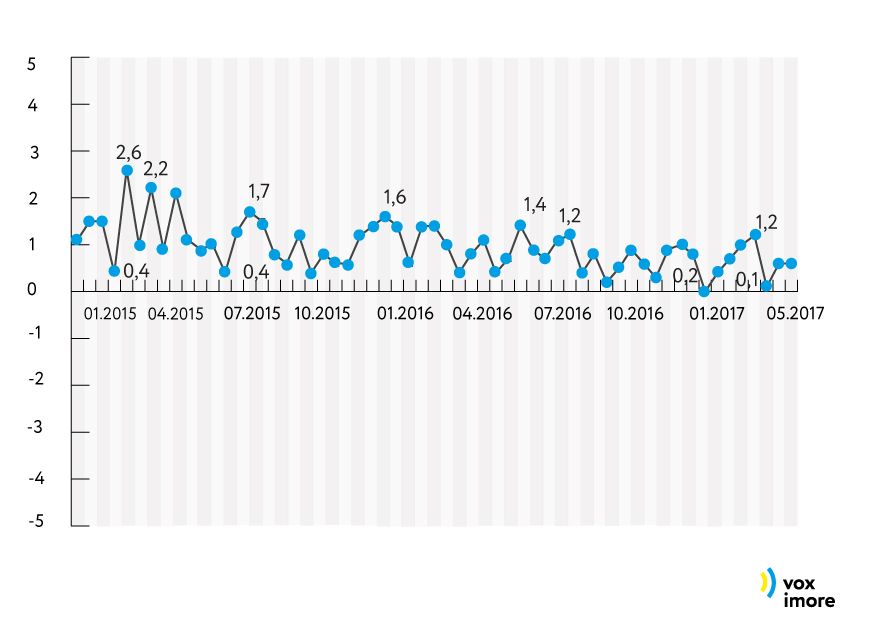 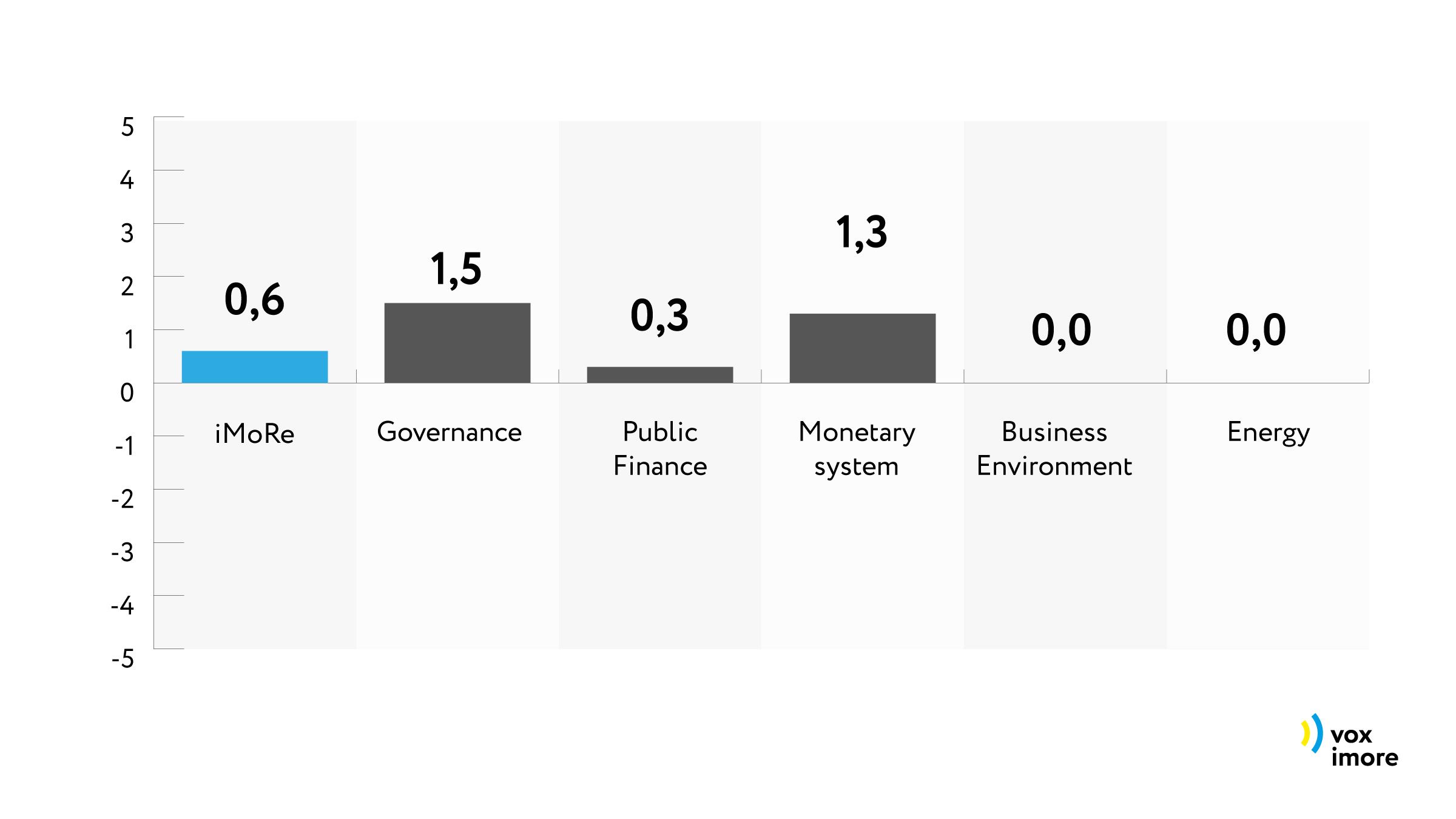 Under the previous law, budgetary institutions were sufficiently autonomous to be in charge of their own reorganization into non-profit organizations if they chose to do so.  Medical institutions were included in this category and given the same degree of autonomy.  However, such operations were covered under economic law, and the procedure was overly complicated. Law # 2002-VIII of 06.04.2017 simplifies these procedures and introduces new mechanisms for managing such enterprises.

“While preparing, the Law Committee tried to minimize the risks of destruction of the existing health care system, its commercialization and privatization. At the same time, we tried to stimulate the implementation of the new and more effective forms of economic management in the health care.

Health care institutions will not be forced to transform from budget entities into the enterprise. The precautions to prevent the commercialization of the health care system, and privatization and redevelopment of institutions, employee layoffs due to their reorganization have been established.

Now, the implementation of the law totally depends on the ability of the Ministry of Health to create the necessary normative acts, approve treatment protocols and model of calculating the cost of medical services.”

“Those health care institutions that decide to become a non-profit enterprises will receive favorable conditions for reorganization. There will be no need in the mandatory property valuation, which is usually required in cases of restructuring. These enterprises will be the assignees of all rights and obligations of the relevant budgetary institutions. Unlike ordinary cases of reorganization, creditors will not be entitled to require medical institutions for early repayment of debt.

The supervisory boards will be established at the health care institutions. They will comprise the representatives of relevant executive authorities, local government, local councils and the public representatives. This will prevent  financial irregularities by management of medical institution and improve medical services.”

“The law on “autonomy” provides that medical institutions are the same businesses as others. Until today they have worked as public institutions on Soviet norms through vertical management, their leaders had no freedom and were guided by instructions from above in the form of orders and signatures. Now the Parliament took an important step and passed the law that allows medical institutions to fully manage by changing the status for non-municipal enterprise.

The law introduces into regulatory field such notion as “medical service”, makes it possible to legally and transparently receive funds from any source of funding, elect the heads of medical institutions on the competitive basis, establish supervisory and trustee boards.

Moreover, the reorganization of the hospitals will have the following advantages:

– the head of the enterprise will get much bigger freedom of the disposal of assets, finances and personnel policy formation, identifying the internal organizational structure of the institution than the head of the budgetary institution;

– medical institutions will be able to set any form of labour remuneration of employees permitted by the law;

– enterprise financing will be performed not according to an itemized cost estimates, but  based on their own financial plan that allows to effectively manage funds;

– medical institutions will get the right to have their own account at the State Bank;

– medical institutions will get the right to form associations with other institutions that also operate in the status of the company in order to redistribute responsibilities between them and cooperatively optimize using material, human and financial resources;

– medical institutions will be able to hire doctors individual entrepreneurs under contract agreement who are registered and obtained the appropriate license to perform commercial activity on medical practice.

At present, the Ministry of Health has developed the Guidelines to help change the economic legal status of public medical institutions by their reorganization. I am sure it will create the basis and prepare the entire industry for the implementation of payment for medical services.”

“If you try to briefly describe the essence of autonomy in one word, it would be the word – independence. What is more, this independence becomes available from the first step, because institutions may choose, whether they remain budget establishments with all defects of such form or transform into non-profit utility enterprises, and get significantly greater managerial freedom.

The new form of governance opens up many opportunities for the institution of health care. Starting from changing the organizational structure to attracting other sources of funding other than state funds. Finally, the hospitals will be able to decide what services and equipment to order. All this should lead to an increased economic efficiency of medical care and providing much better services.

The law will take effect only in 6 months from the date of its publication, so the local communities have enough time to decide what form  their health care institutions will have and prepare for the procedure of reorganization, which is quite costly in time and requires license renewal.

Quite surprising considering the vector of decentralization is that the Cabinet approves the conditions of the competition for the post of the head of such institution and standard form of agreement with him, not the community.

This Act opens the possibility for the patients to conclude agreements with the health care institutions that meet their criteria of quality and level of medical services.

To prevent corruption, the law provides for the creation of Supervisory Boards and Trustees, which should consist of the representatives of local government and NGOs that will monitor the institutions’ activity.

In general, the law is quite progressive and opens the way to implement the reform of health insurance in Ukraine.”

The law # 1985-VIII of 23.03.2017 allows the shortening of the terms of bank reorganization, regulatory and corporate approvals and reduces the number of documents required to obtain the approvals of regulators such as the NBU, AMC, DFS, and NKTSFBR. This law aims to simplify the procedures for accession of banks. In particular, this mechanism may be used by those banks that need to increase its share of capital, but do not have sufficient funds.

However, experts emphasize that the problem of bank accession has not yet been fully resolved. In particular, there are no effective tools for converting shares, and the issues of  resolving creditors’ claims and informational disclosing after reorganization have not yet been settled.

The law #1985-19 provides small and medium banks with civilized tool for consolidation and thus, meets the requirements of the central bank for additional capitalization. Earlier, the  requirements of the law on increasing the authorized capital of the bank were performed by additional contributions of shareholders, but from now on, there will be the opportunity to consolidate the banking sector by merging banks.

“Even though, simplifying the accession procedure is necessary and important for the healthy policy of banks, the law contains a number of shortcomings:

– nobody will ask creditors of the bank, if they agree to join. That, in fact, means the compulsory change of the borrower, which contradicts the principle of protection of rights of the creditors.

– share price is calculated during the accession by the nominal value. It contradicts normal practice – the nominal value of the shares for the bank, which operates several years, in economic terms does not reflect their true value and the volume of the bank capital. In particular, during this period bank shares could depreciate or increase in value, but during the accession procedure it will not be counted.”