“Let’s reduce the cost of heating by a third!” – ACMH and co-financing program for buildings | VoxUkraine

“Let’s reduce the cost of heating by a third!” – ACMH and co-financing program for buildings

Old houses (built before 1991) with condominiums (ACMH) / HBC pay for heating by 22% or 4.7 UAH / m2 less than houses without condominiums. For a year the savings in the average house is 108 thousand UAH. The corresponding savings figures for new houses (built after 1991) are 30% or 5.8 UAH / m2, which means 324 thousand UAH per year for the house. This money can be used for major repairs, new elevators, roofs, communications, etc.

We thank Anna Denysenko for help in collecting data, Iryna Sharova for help in editing the article, Andriy Sauk and Maria Osypchuk – for valuable comments.

Today, more than 80% of Ukrainians  consider utility tariffs to be inflated. Our analysis shows that the cost of heating (one of the most expensive utilities) can be reduced if residents create condominiums (hereinafter – ACMH).

From the site teplo.org.ua we took information about the cost of heating in houses (UAH / m2), their heated area, the availability of meters and other indicators during the heating seasons 2018-2019 and 2019-2020. In addition, from the portal lun.ua we took data for each house about the year of its construction. The data were combined into a single database  with a house address

In total, the sample contains 7957 houses with a total  area of ​​over 500 m2. The oldest residential building from our sample was built in 1835, the newest – in 2018. In total, 13% of the houses in the entire sample were built in independent Ukraine (hereinafter – new houses); 76% were built before 1991 (hereinafter – the old houses). Information on the year of construction of the remaining 11% of houses is missing. Accordingly, among the houses whose year of construction is known, 15% are new and the remaining 85% are old.

11% of houses in our sample belong to the category of  ACMH (condominiums)/ HBC. Another 81% of houses are serviced by former housing -public utility services, and only 8% of houses use the services of managers from developers or departmental institutions.

Old houses are mainly serviced by utility services (former ZhEKs – housing-public utility service companies). Only 9% of old houses have ACMH / HBC.. Among new houses, the share of ACMH/HBC is higher – 26%. However, new houses are most often transferred to the management company, the “daughter” of the developer, less often – to the utility company. In our sample, the most common category for new homes is “Invest / Department” (36%) – Fig. 1.

Figure 1. Distribution of buildings by year of construction and form of management 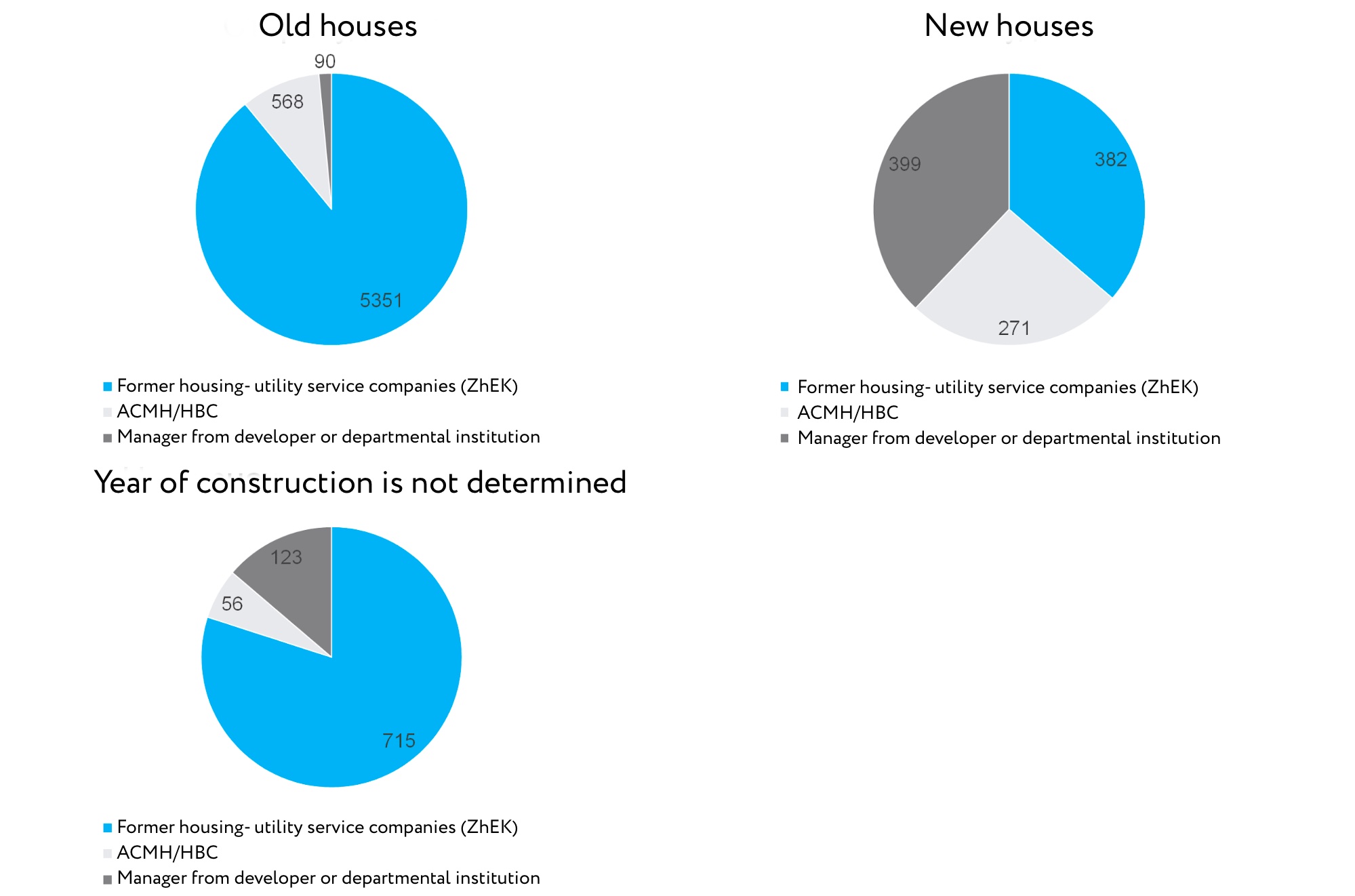 Superficial analysis shows that usually in ACMH/HBC, regardless of the year of construction for heating pay 1.5-4.9 UAH / m2 less than in houses of other categories – Fig. 2 (more details in the appendix).

Figure 2. Median of heating costs during the heating seasons 2018-2019 and 2019-2020 in terms of different categories of houses (the difference for ACMHs is statistically significant)

For a more detailed analysis, we took into account other factors that could affect the cost of heating: the presence of the meter in the house, its type, the average monthly air temperature in Kiev, the number of heating days, and so on. A complete list of factors can be found in the appendix.

Why do houses with ACMH save money on heating? Some assumptions:

How quickly will the “ACMHs effect” become noticeable?

We considered what happened to the cost of heating in houses that created ACMH in the period from October 2018 to April 2020. Calculations showed that in new houses after changing the form of management for ACMH, the cost of heating fell by 18% compared to the previous period. This is an instant reduction in value, which in the long run reaches 30%. In the old houses there was no instant reduction in cost.

ACMHs can instantly reduce the cost of heat in new houses, as it may be easier to stop heating the house in warm weather. In older houses, the impact on cost is most likely due to insulation and installation of meters. Therefore, the long-term effect of cost reduction in ACMH/ HBC is present, but there is no immediate effect, at least in 2018-2020.

Reducing heating costs in general does not mean reducing the figures in payments (although in some houses this may be the case). The money saved can go to other costs, such as replacing the elevator, repairing the roof or basement. One way or another, for every hryvnia spent on utilities, residents of condominiums will receive more services than where there are no ACMH. Thus, ACVH are really a more effective tool for house management than housing and public utility services or other options.

From the Kyiv City State Administration website, we took statistics on houses that won the competition in the 70/30 program in 2015-2019 (Fig. 3), and included them in our model. 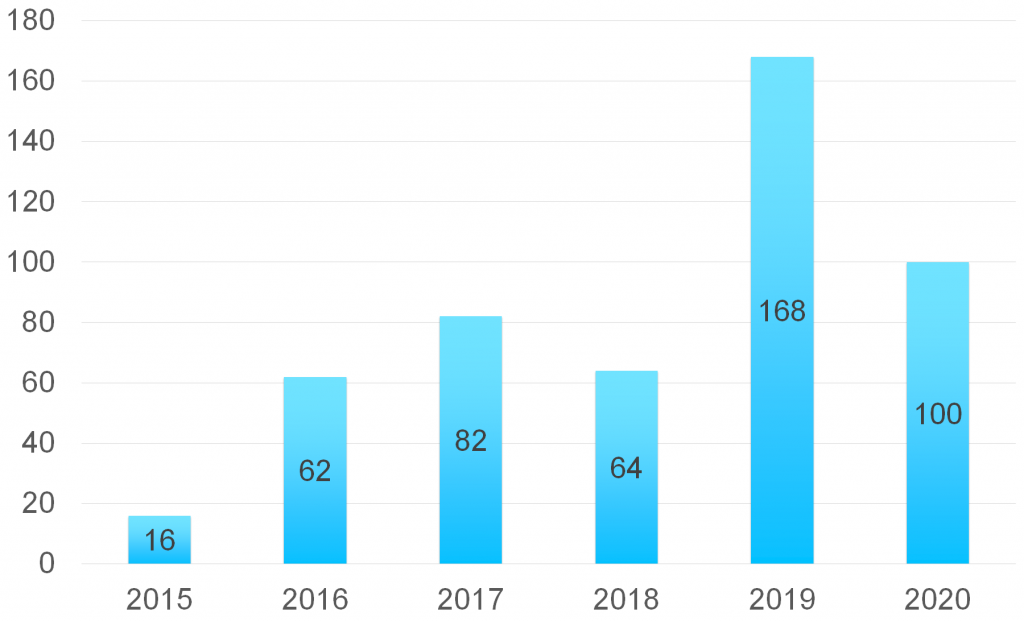 In the new houses that participated in the 70/30 program, the cost of heating is not statistically different from other ACMH/HBCs in the new houses. That is, the overall savings remain at 30%.

Thus, condominiums together with the co-financing program can reduce the cost of heating by about a third..

How has the cost of heating changed for houses that first participated in the 70/30 program in 2018-2019? In older houses, the cost was 16% lower than before their participation in the program. That is, the long-term effect was achieved the following year after participating in the program.

Although older houses may need more renovation, residents of new houses may be more active and prone to self-organization. It turns out that the 70/30 program helps self-organized new houses to a greater extent, which can cope with energy efficiency measures without it, and old houses, which may need more help, to a lesser extent.

This, however, does not diminish the effectiveness of the program in terms of reducing the cost of heating

Currently, some government policies do not encourage the creation of ACMH, but rather inhibit it. For example, in 2020, through a subvention for socio-economic development, funds were allocated for the overhaul of 17 houses and 8 inter-house passages in the city of Kyiv. This overhaul does not involve co-financing of residents, and in the vast majority of funded buildings there are no ACMH.

However, under the 70/30 program this year, there were not enough funds for 85 houses that applied for the competition. In our opinion, it would be more appropriate to co-finance the city program instead of financing individual houses, as the program creates incentives for self-organization of people, and co-financing encourages a more responsible attitude to the renovated house. In turn, self-organization, even at such a basic level, raises public awareness. At the same time, even a small chance to get repairs at the expense of taxpayers “with the assistance of a majority deputy”  demotivates residents to create ACMH. We wrote about other defects of the subvention earlier – here, here and here. In addition to 17.5 million subventions for social economic development, in 2018. UAH 1.5 million from the State Fund for Regional Development was spent on overhauls of residential buildings.

In addition, due to the shortcomings of the law, dishonest developers can create “pocket ACMH” and manage the house without the actual consent of residents. This undermines the reputation of ACMH as a tool for home management.

ACMHs reduce the cost of heating by 22% or 4.7 UAH / m2 for old houses and by 30% or 5.8 UAH / m2 – for new ones. These exepnditures  can  be further reduced in Kyiv with the 70/30 program. For older houses, the long-term effect of participation in the program is 15% or 2.9 UAH / m2. During the year, these hryvnias turn into quite significant amounts that can be spent on house repairs. In addition, ACMH save resources (natural gas, which most TPSs operate on), which contributes to Ukraine’s energy independence.

Therefore, these practices need to be developed. Therefore, our recommendations are as follows.

For residents of the multi apartment houses:

Create ACMH and start controlling heat consumption in the house – install meters, if they do not yet exist, consider options for insulation and overhaul of the house, including through the program 70/30.

For the Ministry of Communities and Territories Development and the Verkhovna Rada:

The ministry should refuse to fund certain small facilities, such as residential buildings. Instead, the funds of the SRDF should be directed to co-financing programs for infrastructure modernization similar to the  program 70/30 in Kyiv.

In addition, it is necessary to simplify the procedure for creating ACMH. Gathering a quorum for residents at a meeting can be problematic. Therefore, it is possible to consider the mechanisms of voting at the meeting through the application  DIYA (ACTION) or similar. It is also necessary to create an opportunity to register ACMH online. This requires appropriate changes in legislation and regulations.

In many buildings, the adjacent land plots need to be clearly identified, technical documentation updated and these data digitized. This will help create ACMH, as residents will have more information about their home.

The Ministry should also create a common database of apartment buildings so that sound policies can be pursued.

The Verkhovna Rada of Ukraine, in addition to simplifying the procedure for creating ACMH, needs to eliminate gaps in the legislation that allow dishonest developers to create “pocket” ACMH. This tool should help residents manage their home, not the developer’s monopoly on residents.

At the local government level, overhaul programs should be introduced in houses with ACMH or HBCs. This is a necessary but not sufficient condition to motivate residents to create condominiums.

To help residents make major repairs to the most derelict homes, coefficients can be introduced that will favor older houses. For example, in Kyiv, the 70/30 program for old houses may look like 80/20, and for new ones – 60/40.

Communication of co-financing programs is very important. Local authorities should advertise these programs en masse. For example, information about such programs can be added to payments that come to residents every month. Such programs should be promoted on local TV channels, Youtube and other social networks. To motivate people to abandon the status quo and create ACMH, communication must be massive, powerful and long-lasting.

To expand the budget for overhaul co-financing programs, local authorities can submit these programs to SRDF project tenders instead of small projects or individual houses, which are funded annually by the fund.

Cities with apartment buildings can create sites similar to teplo.org.ua so that locals can find out which houses pay more and which pay less and why. It will also motivate residents to create condominiums. Such sites, as well as the site teplo.org.ua, should be supplemented with data on home insulation, installation of thermostats, etc., if such data are available. Such data will allow to determine which settlements are the most energy efficient and which ” take the dust “.

In building econometric models, we took into account the following factors::

Since most of these variables are constant for each house, and some are constant for each month (the same for all houses), we built a dynamic model in 2 stages. In the first stage, we built an auxiliary OLS model with constant variables. These variables have a very high explanatory power (0.75), so we cannot ignore them. In the second stage, we took the residues from the auxiliary model and used them as a dependent variable in the FE model.

The main results of the models are given in Table 2. Detailed results, including all variables and the auxiliary model, can be provided upon request. All standard errors are robust standard errors.