PIT payments rise up faster in hromadas than in districts | VoxUkraine

PIT payments rise up faster in hromadas than in districts

If the personal income tax payments from salaries had grown in the same way in the territories with no ATCs as they did in the ATCs, the 2019 budgets of various levels would have received an extra UAH 0.75 billion from this tax alone.

On July 17, the Verkhovna Rada passed a resolution requiring the creation of the new districts – much larger than the current ones. At the same time, the powers and sources of funding of the hromadas and the new districts have not yet been clearly defined. Bill 3614, adopted in the first reading, should partly help with this. It should regulate which taxes will go to the district budgets. The bill’s current version assigns the hromadas’ revenues to them. It is important maintain this principle and adopt it in the second reading, as well as enshrine in the law.

Decentralization reform at this stage

In 2016, the first ATCs were created as part of the decentralization reform covering 1.4 million people. Every year people created more new hromadas. As of 2019, the population of the districts covered by the ATCs (8.2 million) almost equaled the population not amalgamated as hromadas (9.7 million) – Fig. 1 (the calculations exclude the population of Kyiv and the regional centers).

Figure 1. Population inside and outside of the ATCs (excluding the regional centers and Kyiv) 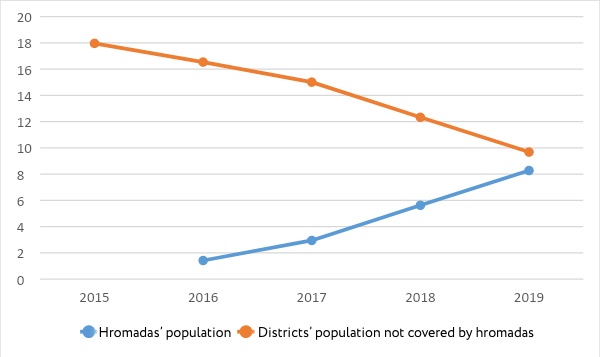 In 2020, the formation of hromadas will be completed and the new districts are expected to be created. According to the far-reaching plans for the regions, the entire territory of Ukraine will be covered by hromadas, the elections to which are to take place on October 25. The districts will be much larger than before.

Studies show that in hromadas, especially small ones, residents are more willing to pay taxes. This may be accounted for by the fact that ATCs provide better municipal services and ensure better development of the territories than district administrations. The logic is this: ATC heads are elected by people and are accountable to people, while heads of district state administrations are appointed by the President.

Decentralization means that ATCs have more powers to provide public services. They are responsible for preschool, primary and secondary education, primary health care, orphanages, cultural programs, housing, communal services and amenities, local roads, etc.
ATCs receive more funding to exercise those powers. It includes local taxes and 60% of personal income tax (PIT) revenues. The PIT is the main tax with regard to hromadas, accounting for 57% of ATCs’ 2019 tax revenues.

The localities that are not amalgamated into ATCs transfer 60% of the PIT to the district budgets, with the remainder going to the state budget.

We analyzed the ATCs’ tax revenues in 2014-2017. It turns out that in large hromadas (over 9,000 residents), personal income tax revenues rose as fast as in district budgets, and in small hromadas (up to 9,000 residents) they grew nearly twice as fast (Fig. 2). Specifically, we looked into 269 district budgets and 115 hromada budgets, representational for the whole of Ukraine in 2017. We constructed similar budgets for them for “districts without ATCs” and “unamalgamated hromadas” for 2014. At that time, 25% of PIT stayed with hromadas, with 50% going to district budgets. We put the obtained indicators in line with the 60% of PIT paid by the residents (to compare the situation with the years following the decentralization). We expressed the PIT indicator from salary payments per person and translated everything into the hryvnia of 2019 (so that it could be compared with the current situation).

Figure 2. Median revenues to consolidated district budgets and hromada budgets from PIT from wage and salary payments (2014, equivalent to 60% at the local level), UAH per person 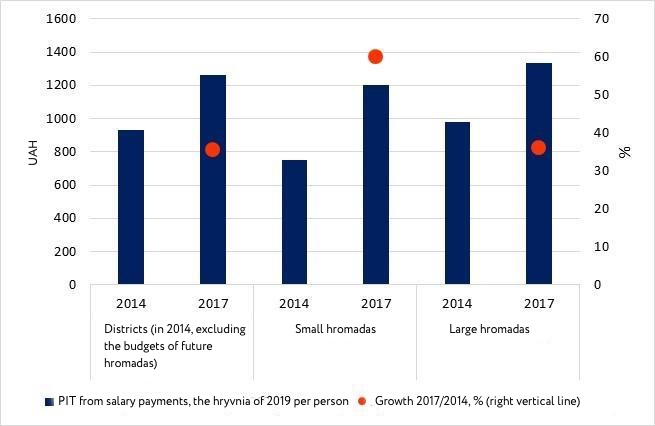 We can see that in small hromadas, the amount of PIT paid from 2014 to 2017 increased by 60%, and in districts and large hromadas by 36%. This “surge” can be explained by the fact that in 2017, the Government doubled the minimum wage (from UAH 1,600 / month to UAH 3,200 / month). However, small hromadas still show much faster growth, even if the share of those receiving the minimum wage there is a bit larger.

Earlier, we found that in 2014-2017, the unified tax accounting for 15% of hromadas’ tax revenues in 2019, also grew faster in small ATCs than in large ATCs or the localities not amalgamated into ATCs. That is, small hromadas show faster growth with regard to several income taxes.

Earlier, we talked about 2014-2017 when the decentralization reform was only gaining momentum. Now, we can assess many more hromadas and compare them with districts in terms of PIT revenues.

Four years into the reform, PIT revenues from salaries per person of hromada budgets on average rose faster than those of district budgets. Specifically, revenues from personal income tax to hromada budgets grew by 9.75% and to district budgets by 7.84% in 2019, compared to 2018 (Fig. 3). The effect persists even with an increase in the minimum wage (Fig. 4 and the box).

Figure 3. Local budgets’ revenues from the PIT from wage and salary payments in 2018-2019, UAH per person 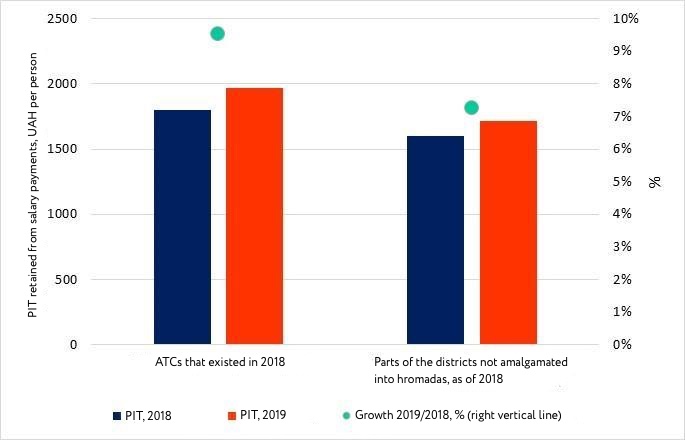 Figure 4. Local budgets’ revenues from the PIT retained from wage and salary payments in 2018-2019, UAH per person, taking into account the effect from raising the minimum wage for government employees 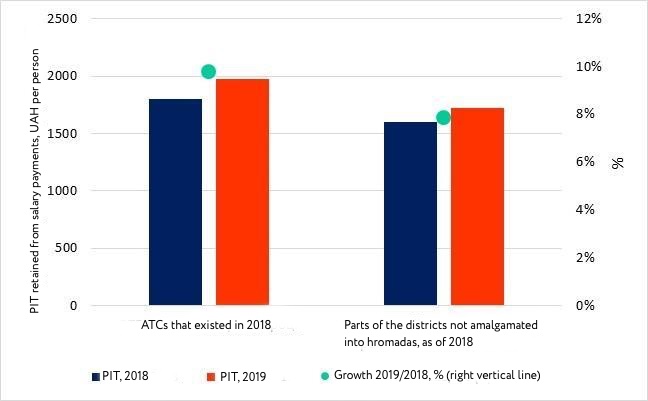 Calculating the PIT growth effect, without taking into account the minimum wage increase

The number and share of civil servants in the labor market is higher in the districts than in the hromadas. Since there are no government bodies in the hromadas (e.g. district state administrations). At the same time, government employees’ salaries depend on the minimum wage.

According to the data by the State Statistics Service, in 2017, 7.8% of Ukrainians were employed with government bodies and 8.8% with government organizations (institutions, establishments). Suppose that the districts’ indicators are at a level equal to the country’s average, while in the case of ATCs, they only apply if a hromada is established in a district center. Since there exist no district state administrations, prosecutor’s offices, treasuries, etc. in an ATC outside a district center.

In this case, it is a general increase in Ukraine. However, based on the above data, it can be assumed that in small hromadas the growth is faster than in large ones.

Why are they more willing to pay taxes in the hromadas?

There can be several explanations.

In addition, ATC leadership, especially in small hromadas, can communicate with the entrepreneurs working partly in the shadows to encourage them to step out. Firstly, ATC leadership is more aware of the business and tax capacity of its “charges” at the local level. Secondly, the broader powers of ATC leaders make them more interested in filling the local budget and getting entrepreneurs out of the shadows.

These two reasons, possibly accounting for a faster increase in tax receipts (with respect to the personal income tax and the unified tax in the hromadas), mean greater trust within hromadas. If hromadas are deprived of the tax revenues in favor of district budgets, trust can be destroyed. It could also undermine the confidence of hromada residents in the central government.

Hromadas are a place where the residents can clearly see a connection between the taxes they pay and the public good. If the funds and respective powers are taken away from hromadas, this connection will be broken. Consequently, lots of businesses might go back into the shadows. As a result, we will get into a vicious circle when the state does not have funds available for public services, and the residents complain that they pay taxes for no good reason, starting to pay even less.

It is now very important not to destroy trust within the hromadas, giving them an opportunity to develop. Therefore, the powers and funds (e.g. local taxes or 60% of PIT) should be left at the ATC level.