The Ranking of Ukrainian Parliament Members: Efforts in Implementing Reform during the 5th Session | VoxUkraine

The Ranking of Ukrainian Parliament Members: Efforts in Implementing Reform during the 5th Session

How can the efficiency of an MP be measured? How do we determine which MPs are productive and which are simply wasting taxpayers’ money? VoxUkraine regularly prepares the iMoRe ranking of reform-minded MPs, which shows how each MPs votes for important bills that are aimed at implementing reforms in Ukraine. In this edition, we have focused on factions. We look at which faction is the most disciplined one, which area of reforms each faction prefers, as well as which MPs vote worse: majoritarian MPs or those elected on party lists.

It is difficult to hold Ukrainian parliament members, as well as the government in general, accountable if clear criteria and tools for measuring their efficiency are absent. A number of NGOs and civil projects in Ukraine keep track of the work of legislators: rada.oporaua.org, Chesnо, RPR and others. Some of them focus on the attendance; others look at how MPs vote for their colleagues; still others analyze the quality of initiated bills. Moreover, MPs themselves report about their work in districts, international trips, amendments proposed etc.

There is no shortage of information yet it is difficult to determine which of the indicators are useful for assessing an MP’s efficiency. Another important question is whether an integral indicator can be designed, which would help a voter to understand how well an MP works.

VoxUkraine has focused on assessing the most important function of MPs by looking at how they vote for reform-oriented bills. Based on this analysis, we regularly update the iMoRe ranking of reform-minded MPs.

What is the ranking about?

The iMoRe project evaluated the efforts of the parliament, the government, as well as the president and the National Bank of Ukraine, in implementing reforms. About 40 experts assess each reform-oriented law. The assessment of bills, as well as the methodology, can be found on the iMoRe web site. Based on the iMoRe index components, we have ranked all legislators in order to show to what extent each MP has supported reform-oriented laws (there were about 200 such laws at the end of the 5th session).

No change on top

The list of top-10 MPs has not changed much over the 5th session (since September 2016). The switch between two representatives of the Petro Poroshenko Bloc has been the only notable change: Serhiy Melnyk moved from the 13h to the 7th position, while Volodymyr Melnychenko moved from the 8th to the 11th place.  The density of the scores in the top part of the ranking is high. Therefore, if an MP misses a couple of important votes, she may easily lose several places in the ranking.

People’s Front dominates the ranking. 7 of its representatives rank among the top 1o, while other 3 top MPs represent the Petro Poroshenko Bloc. High ratings of People’s Front can be explained by the high level of discipline in the faction and the absence of serious conflicts among its MPs.

The variation in the average score of MPs by factions is somewhat lower. People’s Front is still leading by a significant margin. The average score of the Petro Poroshenko Bloc MPs is more than 30 points lower. Samopomich MPs lag behind by 8 points. The Opposition Bloc has taken the last place as its MPs rarely attend the parliament.

Yet opposition MPs also reached the top in some areas. For instance, Opposition Bloc MPs have on average improved their score by 64%, which has been the best result over the 5th session. They are followed by the Revival group (29%), the Radical Party (27%), the Petro Poroshenko Bloc (23%), People’s Front (21%), People’s Will and Samopomich (each improved its scores by 20%), Batkivshchyna (17%) and non-affiliated MPs (13%).

Such an impressive progress of the successors of the Party of Regions does not mean that they have suddenly started supporting reforms. Rather, it signals the weakness of the coalition, which has to seek votes among the (formally) opposition MPs. The question is what they ask for in exchange.

The ranking of factions 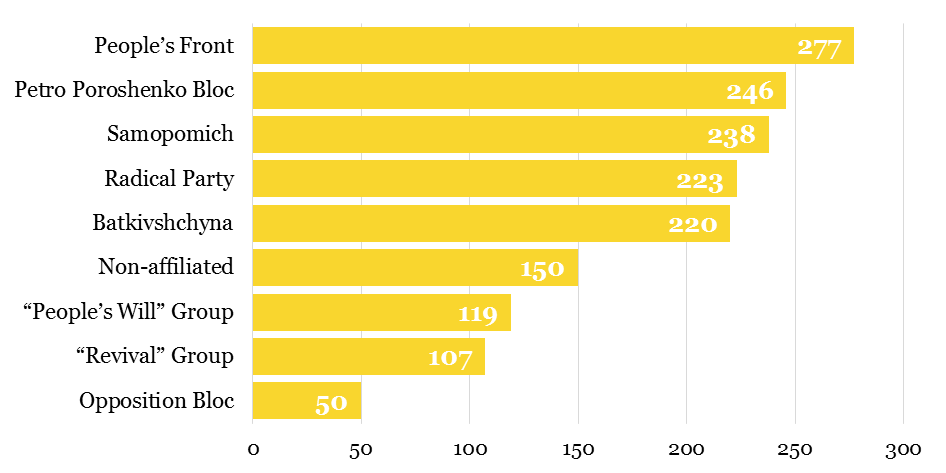 The discipline in factions

There are several methods of assessing the level of discipline in a faction. For instance, the Rice Index is used for this purpose in the US Congress. Another approach consists in assessing the dispersion[1] of the MPs’ rankings around the average score. Low dispersion means that MPs mostly vote for iMoRe bills in a similar way. High dispersion, on the contrary, may signal weak discipline in the faction. 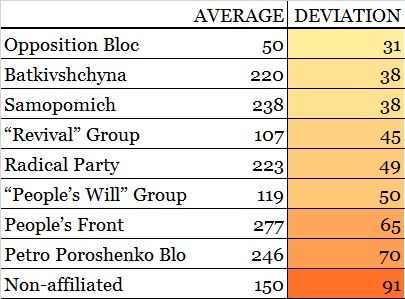 The dispersion of MP scores within factions

Perhaps, those Petro Poroshenko Bloc MPs that were elected in majoritarian districts are to blame? The answer is no. On average, they scored 22 points more than those MPs that were elected on the party list. For instance, Vitaliy Chepynoga’s rating is the worst in the presidential fraction. He visited a mere 27% of plenary sessions, is a member of 7 intra-parliamentary groups and has 25 assistants (3 of them work full-time).

Two non-coalition factions, Batkivshchyna and Radical Party, are more monolithic and disciplined. To some extent, they are similar to each other: they both have a clearly defined leader, rigid internal hierarchy and similar voting patterns (when it comes to iMoRe bills, the correlation is equal to 80%). Yet there are some discrepancies. For instance, Batkivshchyna supported the bill on the judicial system and the status of judges, while the Radical Party voted against it. Six months later, the situation reversed, when almost all the Radicals voted for the bill on the Supreme Council of Justice, while Yulia Tymoshenko’s faction did not support it.

Breaking the ranking into parts

This methodology helps determine the extent of support that each faction lends to initiatives in each area.

The ranking of factions by the areas of reform

The analysis yields some interesting insights. While Yulia Tymoshenko’s political force ranks only fifth in the total ranking, it has ended up on the 3rd position in the “Public administration” area. The reason is that Batkivshchyna supports anti-corruption bills more often than the Radical Party and Samopomich.

Whether a faction decides to support a bill depends on who has initiated it. Given the tensions between Andriy Sadovyi, the leader of Samopomich, and President Petro Poroshenko, Samopomich did not support some of the anti-corruption initiatives of the President. For instance, only two Samopomich MPs voted for the law on guaranteeing the right to a fair trial.

The results of the 5th session

[1] We have used standard deviation to assess the dispersion.