The government never stopped working on long-term economic reforms, despite having to quickly restructure its work at the end of February to meet wartime needs. In the first quarter of 2022, we spotted 35 important changes. This is significantly less than at the end of the previous year when there were as many as 57. However, it is comparable to the third-quarter results for 2021, when 39 regulations entered the Reform Index.

Among the 35 important changes, 34 were positive, and only one turned out to be anti-reform, namely the law on localization in mechanical engineering signed by the President in early January. Read more about the significant developments below.

In the first quarter of 2022, the following three events scored as high as +2.0 points (in the range from -5 to +5), which in our opinion, separates significant reforms from less important ones:

At the beginning of 2022, experts spotted only one anti-reform law on localization in mechanical engineering    (Reform Index 177, -1.5 points). The government introduced localization requirements for procuring industrial machinery (urban transport, railway equipment, equipment for the production and transmission of electricity, etc.). Localization in procuring these products must increase from 10% to 40% within ten years. To avoid violating Ukraine’s international obligations, these requirements will not apply to countries that have signed the WTO Agreement on Government Procurement, particularly the EU and the United States.

Why is this anti-reform? “The law’s introduction may lead to a decrease in competition and, accordingly, to an increase in the cost of procuring mechanical engineering products, for which a mandatory percentage of localization has been set. And all this against a backdrop of the urgent need for modernization and investment in infrastructure. It could also lead to procuring lower quality engineering products in the absence of their high-quality imported counterparts (with proper localization levels). It could, in some cases, impede procurements,” explains Oleksandra Betliy, an expert at the Institute for Economic Research and Policy Consulting.

In the first quarter of 2022, we spotted changes in four out of the five monitoring areas. No reforms occurred in the energy sector, and most of the significant regulations fell under the “Business Environment” category, namely 12. 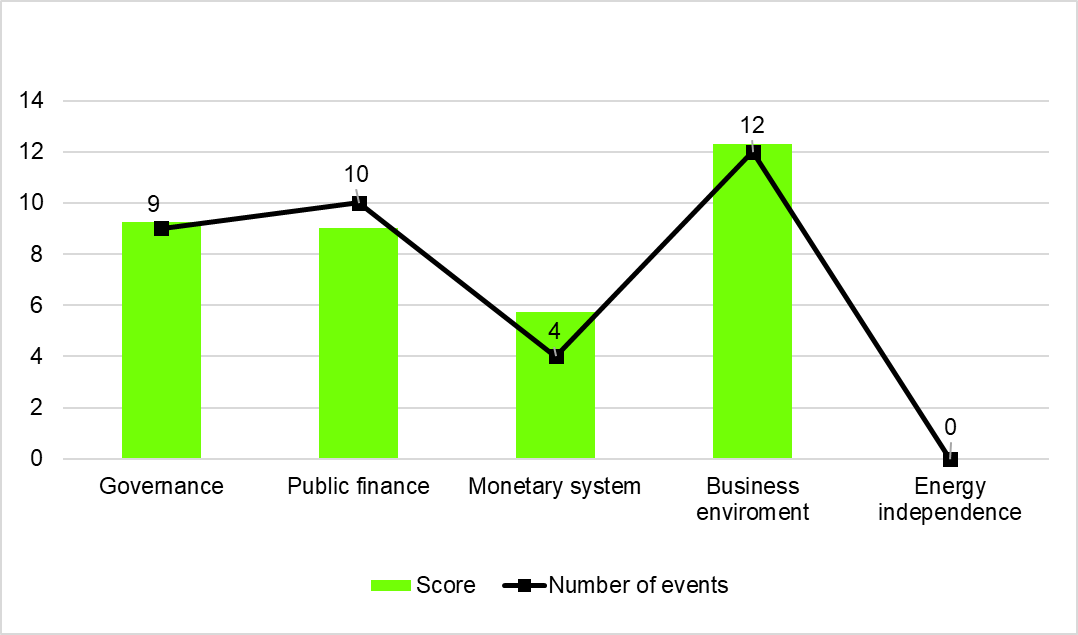 Next, let us look at the areas making the most progress in implementing reform.

At the beginning of the year, we spotted 12 essential changes in this area. The Verkhovna Rada of Ukraine and the Cabinet of Ministers initiated six each.

The law enhancing transparency in extractive industries received the highest score (Reform Index 177, +1.5 points). It provides terminology, including the definition of “extractive industries,” “project activities,” “economic entities operating in extractive industries,” and “subsoil use agreements,” and updates legislation to align with the EITI Standards (Extractive Industries Transparency Initiative, 2019). It introduces reporting of payment amounts for carbon dioxide emissions and clarifies the procedure for disclosing information as required by law: reporting forms, submission deadlines, and the amount of data to be disclosed. Another innovation is that information about the average number of employees must be provided to determine the number of employees by gender.

Another long-awaited step was signing the Free Trade Agreement between Ukraine and Turkey (Reform Index 179, +1.0 points). Negotiations lasting 15 years finally ended with the signing of the Agreement. According to the Ministry of Economy, Ukraine gets an opportunity to import 10,377 goods to Turkey duty-free (and Turkey 9,500), Liga.net writes. As a result, 95.6% of the Turkish market will be open to Ukraine and 99.6% of ours to Turkey. However, some producers believe the free trade zone carries risks for the Ukrainian industry because Turkey is much more supportive of its producers.

We spotted ten essential changes in this monitoring area. The quarter’s only anti-reform change and the above-mentioned law on improving training at military educational institutions are among them. This time, the Verkhovna Rada and the Cabinet of Ministers initiated four reforms each, with two reforms initiated by the Ministry of Health and the Ministry of Finance, respectively. Most of them relate to healthcare:

In the three months to April, the government adopted nine public administration reforms. The Verkhovna Rada and the Cabinet of Ministers initiated four each, and the Ministry of Internal Affairs initiated one. In addition to the law introducing changes to the jurisdiction of courts we mentioned earlier, the most essential steps in this area are as follows:

The Verkhovna Rada became the reform leader, having adopted 16 regulations in the first quarter of 2022. The Cabinet of Ministers was the runner-up with 14 important resolutions. The Ministry of Health, the Ministry of Finance, and the Ministry of Internal Affairs initiated three reforms. NBU accounted for two reforms and the President for one reform (the bill on virtual assets initiated by MPs was signed into law after incorporating presidential proposals and is therefore considered an achievement of both initiators).

Graph 2. Initiators of reforms in the 1st quarter of 2022 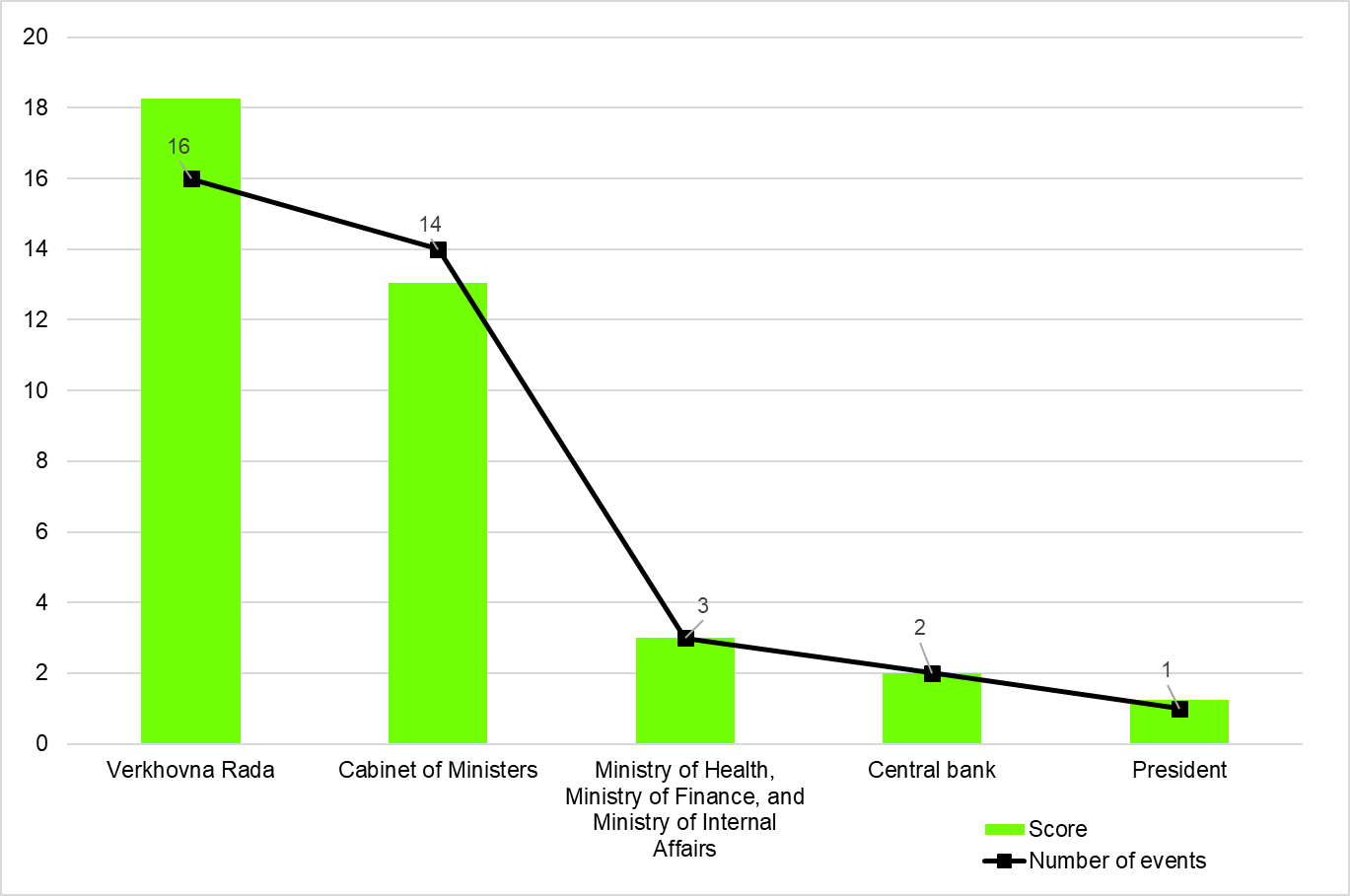 Source: reform Index 177-181. The total number of reforms in the period was 35, with the total number of events being 36 because one reform (the law on virtual assets) was ascribed to two initiators, namely, the Verkhovna Rada and the President (the law was signed after incorporating presidential proposals).

Compared to the previous quarter, in the first quarter of 2022:

The intensifying of negotiations on Ukraine’s accession to the EU poses significant challenges for the country. Ensuring the country’s liberation from russian aggressors, it is necessary to simultaneously bring Ukraine’s legislation in line with European standards and continue judicial reform, which is a cornerstone in combating corruption and ensuring the rule of law. 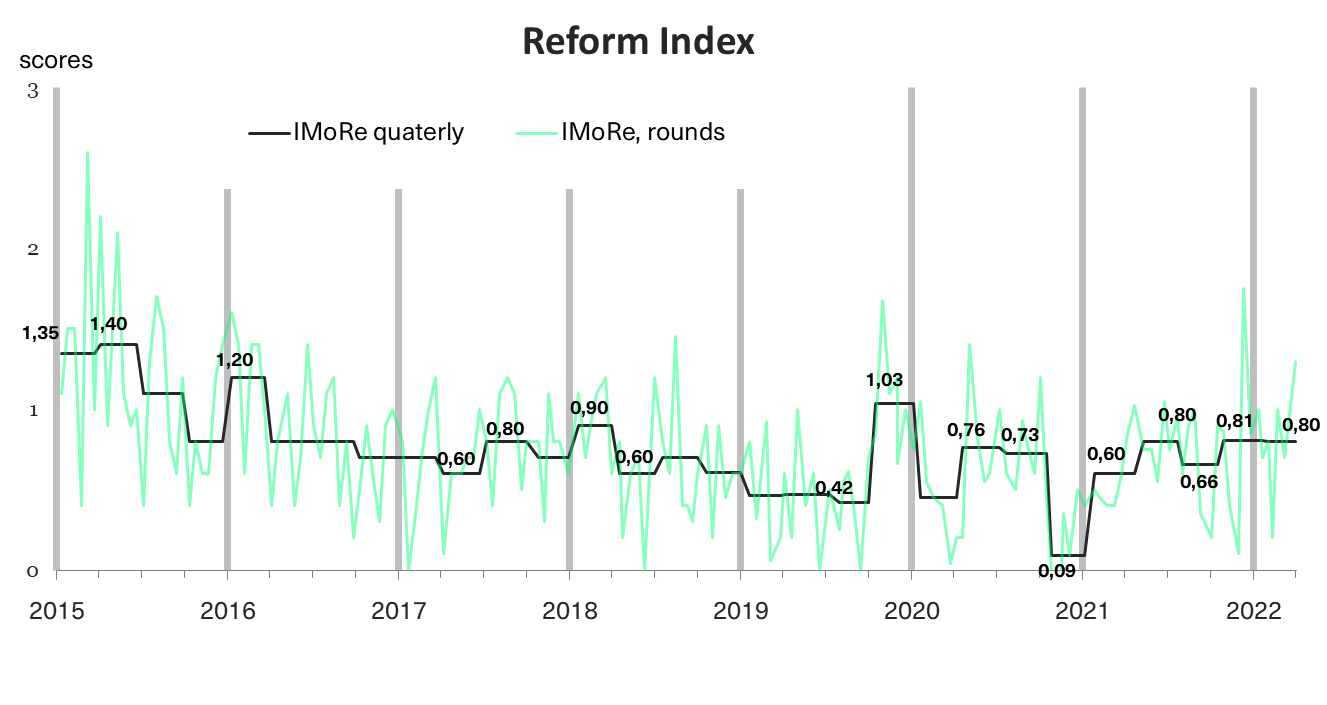