Those who stay: how companies justify their stay in russia

Those who stay: how companies justify their stay in russia

Justifying their stay in Russia by “provision of essential goods” is a poor excuse. In reality, companies that claim this are protecting their market share. Those who stay (including those who keep silent about this) should exit immediately rather than continue to whitewash Russian war crimes with their presence and finance Russia’s war on Ukraine with their taxes.

After the start of the full-scale attack of Russia on Ukraine, with tens of thousands killed and multiple war crimes documented, many companies (often under the pressure of their customers and shareholders) have left Russia. Others stayed, continuing to provide goods and services — to Russians and taxes – to the Russian government.

Figure 1 shows that the healthcare industry has the highest share of companies that continue business as usual or have slightly modified it (usually this implies halting advertising, new investment and new clinical trials), followed by energy, consumer staples and utilities. While the EU has introduced a partial energy embargo (which will probably force some energy companies to leave), the situation with healthcare companies and those producing consumer staples is more complicated. Theoretically these companies can justify their stay in russia by humanism, i.e. providing necessary food or medicine to russian consumers. But how many of them actually do this and are their arguments valid?

Figure 1. Companies that did not exit russia

Data: Yale list of companies (A - companies that completely exited russia, F - those that continue business as usual)

Note: total number of companies in a certain industry in parentheses

To answer this question, we looked at companies operating in healthcare and consumer staples that belong to groups D and F (i.e. the companies that remain in russia) by Yale classification (figure 1) and added to them companies identified by Balyuk and Fedyk (2022) that belong to the same industries and decided to stay in Russia. In total, 111 companies were identified (this list is probably not exhaustive but we believe it contains the majority of companies).

The distribution of these companies by industry and country is presented in the following table.

Table 1. Country distribution of companies from consumer staples and healthcare industries that stay in Russia

Of these companies, 43 did not make any statement on the Russia-Ukraine war. 22 wrote only about their actions (most often complying with sanctions, stopping advertising and making new investment in Russia, and providing humanitarian support for Ukraine). 42 companies (35%) provided a justification for their stay in Russia based on humanitarian reasons.

Some companies provided a combination of these explanations, e.g. Auchan:

Our job is to do everything we can to ensure that the inhabitants of our countries of operation have access to good quality food at an affordable price and thus meet the essential food needs of the civilian population. Our 30,000 Russian employees are doing the same job to be as close as possible to a population that has no personal responsibility in the outbreak of this war. Abandoning our employees, their families and our customers is not the choice we have made. As French President Emmanuel Macron has said, "we are not at war with the Russian people".  Closing our activities in Russia would be considered as a premeditated bankruptcy leading to an expropriation that would strengthen the Russian economic and financial ecosystem, would put our employees and their families in great precarity and would deprive, in a period of high inflation, the population of the services of a discounter distributor, which has been operating in the country for 20 years. Source: Auchan statement

In this statement we see one additional explanation - that “closing our activities in Russia would be considered as a premeditated bankruptcy leading to an expropriation that would strengthen the Russian economic and financial ecosystem”.

Let’s consider these explanations in more detail. Specifically, I will argue that none of them is substantiated by data or logic. This suggests that the decision for the majority of companies to continue operating in russia must be driven by their own financial considerations, rather than anything else.

First, 70-80% of Russians support Putin and believe that Russia is going in the right direction. Thus, most Russians are not suffering under Putin’s regime, they are highly supportive of it. Moreover, they are supporting the war. They are supporting killing of Ukrainians and raping of Ukrainian women and children (the Security Service of Ukraine published a large collection of recordings of Russian occupants talking between themselves or with their relatives. These recordings very well illustrate that they don’t consider Ukrainians as humans). Thus, no targeted sanctions against Putin himself or his minions will change the course of war. Heavy sectoral sanctions affecting all the Russian citizens should be applied. Ukraine is bearing an enormous cost of the war - tens of thousands of lives, between a third and a half of its economy, thousands of houses, roads and other infrastructural objects have been and are being destroyed. Moreover, at least 3000 Ukrainians died (according to WHO) because they were unable to receive medicines for their chronic diseases or immune diseases such as cancer because the supply chains are broken. On top of that, Russia constantly bombs hospitals and maternity homes.

Other countries are bearing a huge cost as well - supporting Ukrainian refugees, providing weapons, humanitarian and financial aid. David Nabarro from WHO said at the Davos forum that 94 countries are at risk of severe hunger or famine because of the Russian attack on Ukraine. Thus, it is unfair not only to Ukrainians but to millions of people in the world to try to shield Russian citizens from the consequences of war which they support.

As another example, Cargill justifies their continued operations in Russia by stating that “Food is a basic human right and should never be used as a weapon”. But this is exactly what Russia does - it destroys Ukrainian grain storages and agricultural machines, it steals Ukrainian grain and blocks Ukrainian ports depriving not only Ukrainian farmers of their revenues but also many people in African and Asian countries of food. If Cargill believes that food should not be used as a weapon then why is it supporting Russia?

Second, Russia is a large producer and exporter of food. It also has a large domestic retail sector (e.g. Magnit, Lenta, Perekrestok etc). So it is doubtful that without those companies or without foreign supermarkets the Russian population would be deprived of the basic food. Likewise, Russia has several dozens of producers of hygiene products which can substitute for foreign producers who leave. In fact, Russians themselves do not want to see foreign companies in their country - they started the campaign “Zamestim” (meaning "we will replace", where the first cyrylic letter was deliberately replaced with a half-swastika russia uses as their war symbol). This campaign implies that they plan to replace imported goods with locally produced ones. If foreign companies are so willing to support Russian people, why don’t they support this campaign?

Third, “premediated bankruptcies” of foreign producers or retailers will not strengthen Russian economy because an enterprise is not only premises and goods. An enterprise is primarily technology, management and expertise. Without foreign managers and engineers those plants and supermarkets will not be worth anything. This is acknowledged even by the strongest supporters of Putin's regime.

Fourth, very often those companies that cite “caring for their Russian employees” as the reason to remain in Russia have at the same time closed their Ukrainian production sites because of the war. E.g. Mondelez states that “We continue to prioritize the safety of our people and our operations remain closed in Ukraine…As a food company, we are scaling back all non-essential activities in Russia while helping maintain continuity of the food supply during the challenging times ahead. We will also continue to support our colleagues in the market who are facing great uncertainty.” Is it fair to deprive Ukrainians of their jobs (and Ukraine of its taxes) while at the same time supporting the jobs and paying taxes in the aggressor state? The same taxes that are then used to purchase weapons to bomb their Ukrainian employees?

Fifth, companies providing pharmaceuticals or medical goods refer to ethics stating that they would continue supplying patients in Russia with essential drugs. However, as explained above, thousands of people in Ukraine are left without medical help. Russian occupants deliberately block humanitarian convoys, destroy medical facilities; in some cases they did not allow pregnant women to go to maternity hospitals. Is this an ethical behaviour? We believe that it is not. We believe that all the pharmaceutical and healthcare companies that consider themselves “ethical” or “socially responsible” should immediately withdraw from Russia. If Russian patients need some medicines, they should ask their government to provide them with those medicines. Or they should turn to the Red Cross to which multinational companies donated huge amounts of money and which tried to help Russia to deport Ukrainians.

Sixth, some companies stated that they would donate their profits from Russian operations to Ukraine, and some already reported donations either to Ukraine or to international charities such as Red Cross, UNICEF, or Save the Children. While this charitable activity can be welcomed, a much more efficient way to help Ukraine would be to donate to local organizations that have much leaner bureaucracy and better understand the needs on the ground. Moreover, while making these donations they are also paying wages to the Russian employees and taxes to the Russian government which are then--directly or indirectly--used to buy weapons and kill more Ukrainians.

Thus any excuses that one may find for remaining in Russia can be easily dismissed. What these companies (and the others, which remain silent) are really doing is protecting their market shares and their profits. Protecting a few thousand lives and jobs in a country that killed tens of thousands since February 24th (and killed hundreds of thousands before that - in Ukraine, Syria, Chechnya, Georgia and other states) and caused millions to lose their jobs, houses, their entire lives is a hypocrisy and an extreme degree of cynicism.

Annex. Analysis of statements of companies that stayed in Russia

More than a half of the companies described helping their Ukrainian employees - providing financial support, helping to relocate etc. Almost two times less companies justified their stay in Russia by their responsibility to support Russian employees; some companies specified that these employees “face challenges”, “have no impact on the situation” and even “face threats of imprisonment, unsafe conditions, and countersanctions.” There were a few “exotic” statements, such as “donating seeds to Russian farmers to avoid global food crisis” or “caring for cocoa producing families”.

Figure A1. Number of mentions of certain topics in the statements of companies on Russian-Ukrainian war 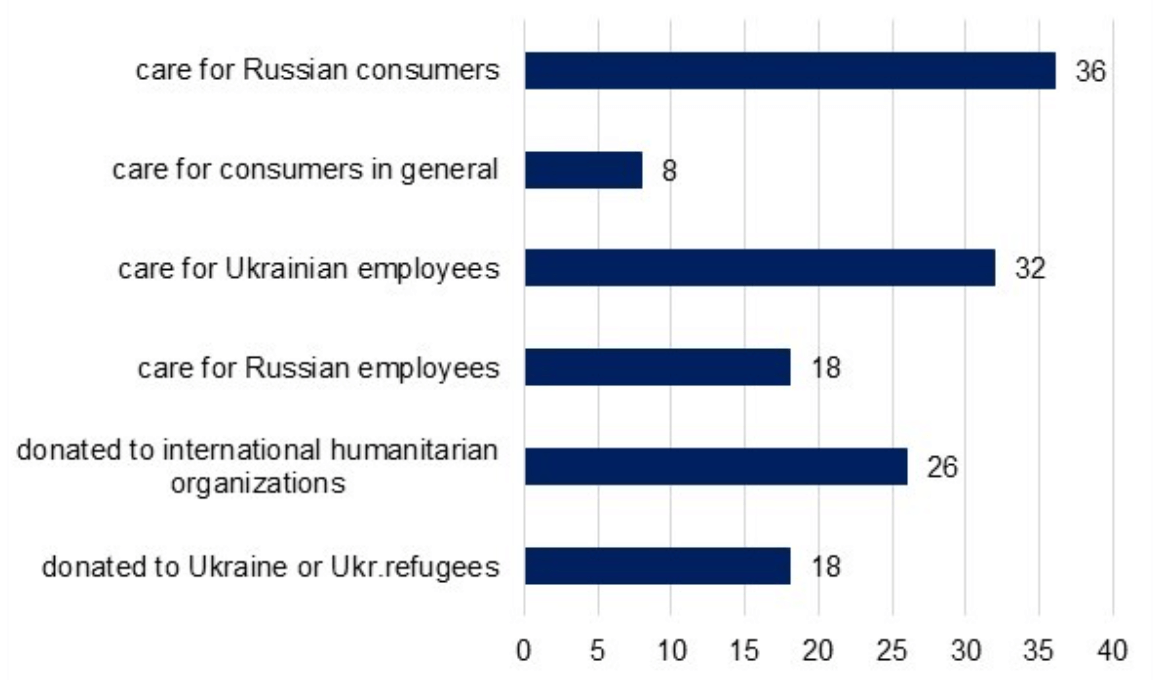 Figure A2 shows that companies mostly call the war the war. Some of them went even further and used such words as ‘invasion’ or ‘brutal aggression’. 14 statements directly or indirectly called Russia an aggressor, although in direct statements the formulation was “Russian army” or “Russian government” rather than Russia. To the contrast, 13 companies (almost a quarter) used some euphemisms to describe the war, such as “conflict”, “situation in Ukraine” or “events in Ukraine”.

Figure A2. How companies called the Russian-Ukrainian war in their statements 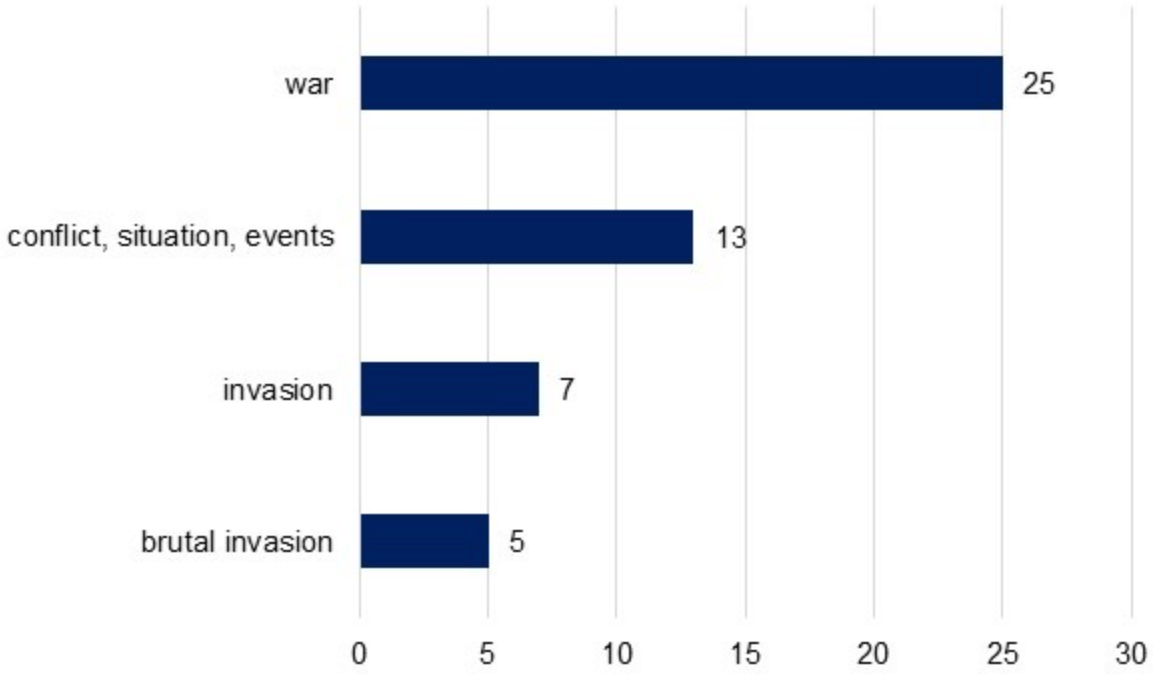