IMoRe# 69. The Fundamental Law on Education could not significantly accelerate the index of reforms | VoxUkraine

IMoRe# 69. The Fundamental Law on Education could not significantly accelerate the index of reforms

The index for monitoring of reforms (iMoRe) is +0.8 points on a scale of -5.0 to +5.0 for the period September 18 – October 1, 2017 (+0.5 in the previous round). Certain positive developments were recorded in the reforming of public finance, monetary system and business environment. There were no reformist legislative changes affecting governance and energy sector.

Among the major events that occurred during this round are a new law on education and a resolution of the NBU on strengthening the requirements for banks conducting trust management operations. 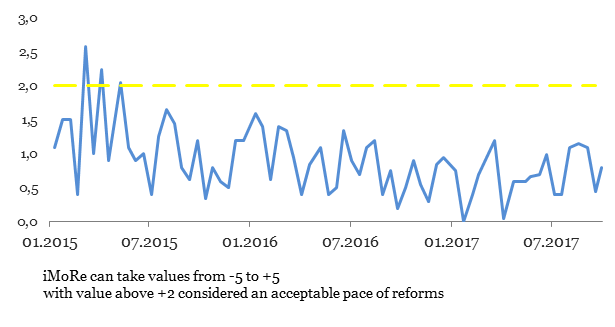 Events of the release

According to formal indicators, Ukraine is one of the most educated countries in the world: the level of literacy is almost 100%. According to the State Statistics Service, 45% of the population aged 15 to 70 years has higher or incomplete higher education. However, there are problems with the quality of education on its mismatches of demand in the labor market. In particular, according to the world ranking of universities, the best Ukrainian university is in the positions of 800-1000, and there are four more after the position 1001.

In order to launch higher education reforms, a new law on higher education was adopted in 2014. The law strengthened the autonomy of universities, transparency in the distribution of state orders for educational services, a new range of specialties in accordance with international classifications. However, a number of systemic problems remained unresolved in preschool, as well as in secondary and higher education.

The new law “On Education” is a continuation of the reform. It is a framework document that defines general principles and approaches for all levels of education.

It states that the language of the educational process in educational institutions is the state language. National minorities are guaranteed the right to study in their native language at the level of preschool and primary education. One or more disciplines can be taught in English or in other official languages ​​of the European Union.

The law establishes the necessity to provide funding for education from the state budget, local budgets and other sources in the amount of 7% of GDP. It is envisaged that the minimum wage of teachers will be gradually increased to three legally established minimum wages by 2023.

Banks that manage construction finance funds (CFF) must comply with special requirements. In order for such banks to more effectively control the intended use of CFF funds, the NBU has determined the requirements for internal procedures in these banks.