Despite the harsher military actions in the second quarter, up to 200 Ukrainian defenders dying daily and russia firing up to 12,000 artillery shells every day, the authorities were able to keep up the pace of reforms in the country. From April to late June, we spotted 33 reforms and no anti-reforms. A quarter of them (eight regulations) received +2 or more points from experts (in the range of -5 to +5), which in our opinion separates significant reforms from less important ones.

*In connection with the war in Ukraine and the state’s change of focus to wartime needs for the period of active hostilities, we changed the period of monitoring regulations for the Reform Index from two to four weeks. Therefore, this quarterly overview of the reforms includes three Reform Index issues (no.182-184) for a period previously covered by six issues.

Ukraine’s decision to join Europe’s power grid (Reform Index #183) scored the most at +3 points. (Implemented in March, it was included in the Index’s April issue)

At midnight on February 24, Ukraine’s power system was disconnected from the energy systems of russia and belarus to test its autonomous operation. However, reconnection became impossible because of the russia’s full-scale invasion of Ukraine. The close cooperation of Ukrenergo and the European Network of Transmission System Operators for Electricity (ENTSO-E) made it possible to unify the European and Ukrainian power systems in March 2022. In addition to energy security and independence from russia and belarus during the war, it gave Ukraine a profitable market for electricity sales.

”Ukrenergo is gradually increasing the capacity to be allocated through auctions. The capacity may reach several gigawatts by the year’s end. Auction prices for power allocation can be quite interesting for Ukrenergo and the state. For instance, the price for access to the intersection with Romania at the auction held on June 28, 2022, varied from UAH 4,200 to UAH 8,300 per MWh, which was the absolute record for all auction years. With this access price and the allocation of 2 GW, Ukrenergo could receive up to UAH 72 billion per year,” explains Maksym Sysoiev, representative of the legal company Dentons, a member of the Energy Committee of the American Chamber of Commerce in Ukraine.

Several essential laws passed in the second quarter of 2022 were designed to reduce russia’s influence on Ukraine and punish war criminals and collaborators:

Other major reforms concern providing medicines for the seriously ill and include Oschadbank into the general deposit guarantee system:

In the second quarter of 2022, we supplemented the Reform Index with a new component, “Human capital.”

The second quarter of 2022 saw changes in all six monitoring areas. Most reform-related regulations fell under the “Business Environment” category, namely eight. However, in terms of overall progress (i.e., the sum of all events’ scores), “Governance” ranks first. 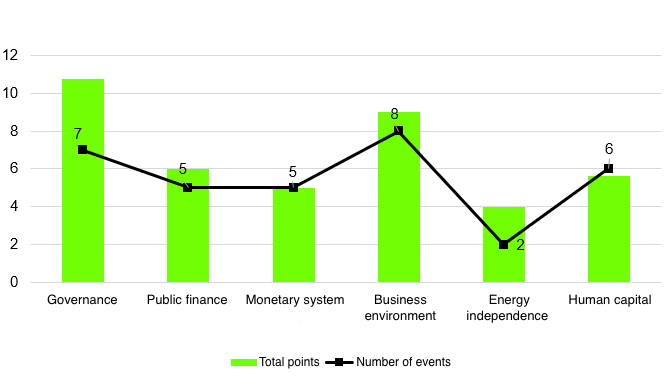 Next, let us look at the areas making the most progress in implementing reform judging by the total points: “Governance,” “Business Environment,” and “Public Finances.”

In the second quarter, the authorities adopted seven reforms relating to governance. Parliament initiated four and the Cabinet of Ministers three. However, three laws were passed after considering the president’s proposals, so we included him among the co-authors of these regulations.

In addition to the laws on banning pro-russian parties, punishing collaborators, cooperating with the International Criminal Court, and administrative procedure, the most critical changes in this area include:

In the three months to July, we spotted eight significant changes in the area. Five laws were initiated by the Verkhovna Rada (with one co-authored with the president and adopted after considering his proposals). Two laws came from the president and one from the Cabinet of Ministers. The Ministry of Finance’s order was also included in the reforms.

In addition to ratifying the above-mentioned open aviation area agreement, fundamental changes include:

In this monitoring area, we detected five essential changes. This time, three reforms were initiated by the Verkhovna Rada, one by the Cabinet of Ministers and one by the National Bank. In addition to the law adding Oschadbank to the general deposit guarantee fund, significant changes include:

In the second quarter of 2022, the Verkhovna Rada became the leader by adopting 16 reform regulations. The Cabinet of Ministers came second, with 12 laws and adopted resolutions. Five reforms (four of them co-authored) came from the President. The NBU adopted two significant resolutions and the Ministry of Finance one. Ukrenergo, which signed the agreement on joining the European power grid, also ended up in the reformers’ rankings.

Graph 2. Initiators of the reforms in the 2nd quarter of 2022

The reforms’ total number in the period of the review is 33, with the events on the graph being 37. The four laws, initiated by Parliament and the Cabinet (punishment for collaborators, administrative procedures, sanctions related to assets of individuals, and banning pro-russian organizations and occupiers’ symbols) were also ascribed to the president as signed after considering the president’s proposals.

Compared to the previous quarter, in the second quarter of 2022: 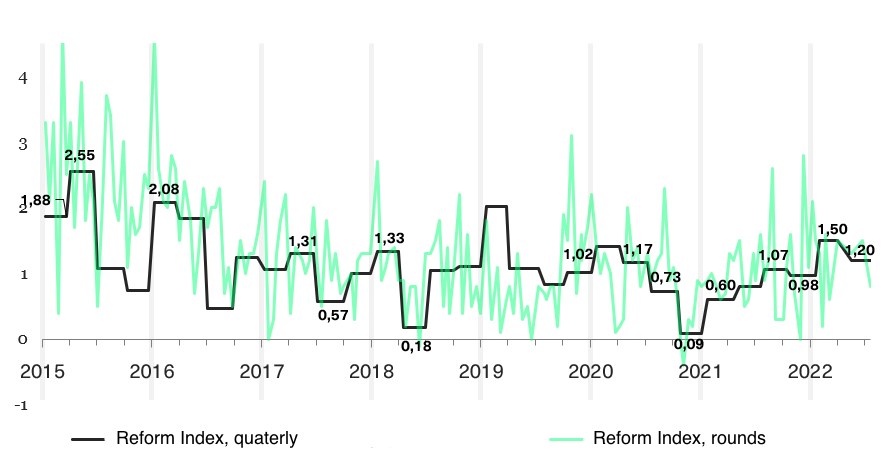 Note: the rounds’ and average quarterly scores were recalculated based on the 2022 audit results.

With the war between russia and Ukraine entering into a protracted phase, there is an increased need to solve “long-term” problems, including limiting russia’s influence on Ukraine’s internal environment, fighting with collaborators, searching for missing persons, and supporting their families. Seeking ways to fund the state budget remains an essential issue since tax revenues fell due to the war. The devastation, the growing numbers of unemployed and internally displaced persons, and a huge surge in defense spending wrought by russia increased the need for financing. These issues were therefore the focus of Ukrainian authorities’ decisions. Ukraine also took several significant steps toward the European Union in the three months to July.

On June 23, the European Council granted Ukraine EU candidate status (with conditions). We hope that candidate status and the EU accession “road map” will speed up Ukraine’s much-needed reforms and prevent the government (in the broadest sense) from going astray.

For the European dream to become a reality, Ukraine needs to build institutions and overcome obstacles on the way to the rule of law, harmonize domestic legislation with European regulations, and keep the mind focused on climate challenges and the need to develop “green” energy and environmentally friendly production.